Last month, the city of Portoferraio on the Italian  island of Elba hosted over 400 riders in the inaugural FIM Enduro Vintage Trophy. This is a race that grew out of the vintage class that was held in the 2019 ISDE. The inclusion of older bikes at the ISDE generated such interest that a stand-alone event was justified, and riders from 15 different nations attended. Among them was ISDE and Dakar legend Stephane Peterhansel, who rode a Yamaha IT250 to win the C6 class. Also attending was the entire Italian Silver Vase team which won on the Isle Of Man in 1975 and included Pierluigi Rottigni, Attilio Petrogalli, Gualtiero Brissoni and Pietro Gagni. American attendance was light. Italian-American Marceca Silvo Salvatore made plans to ride with Rick Johnson and Troy Lee, but Johnson was injured and Covid-19 made travel plans difficult. The organizers gave us a taste of the event in photos, which we are delighted to share. The 2022 FIM Enduro Vintage Trophy is scheduled to be held in Portugal. 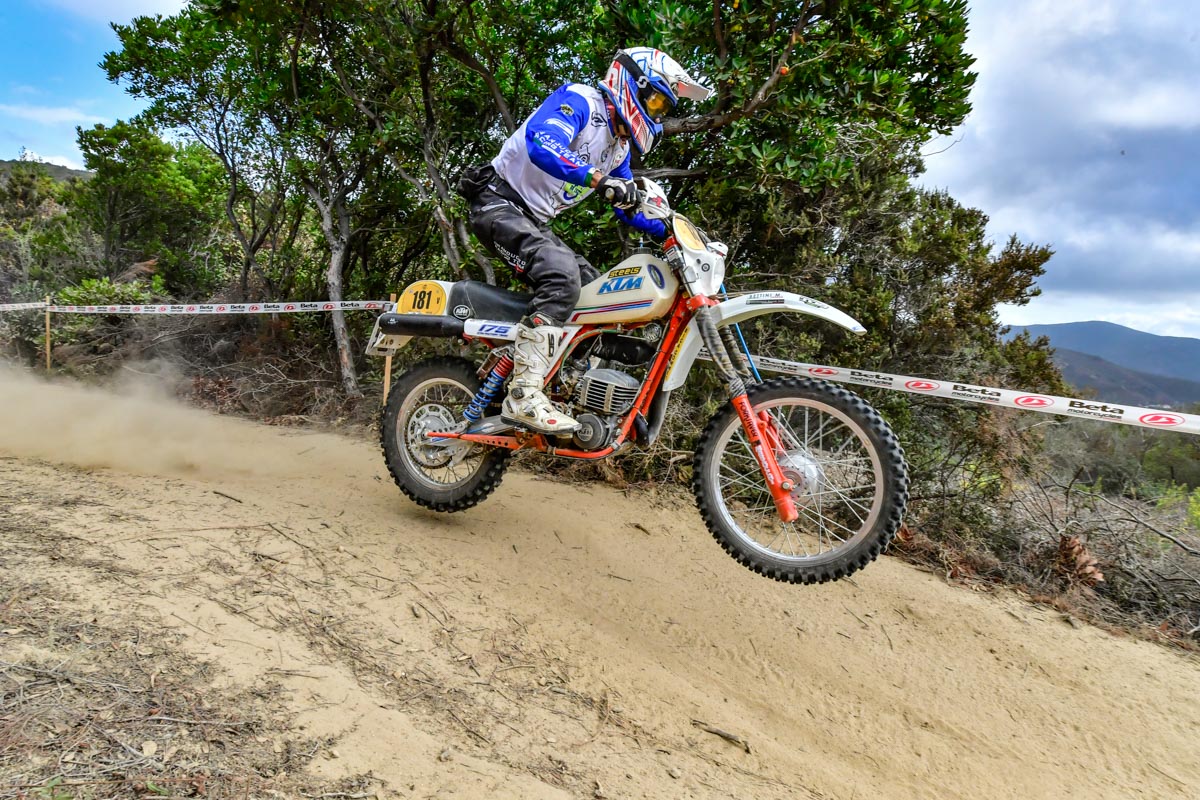 He wasn’t in brilliant shape, but nevertheless he managed to do his part on KTM 175. Maurizio Bettini won the C5 class and won, together with Luigi Mazzoni (KTM 250) and Mario Graziani (Gori 250), the Vintage Silver Vase. 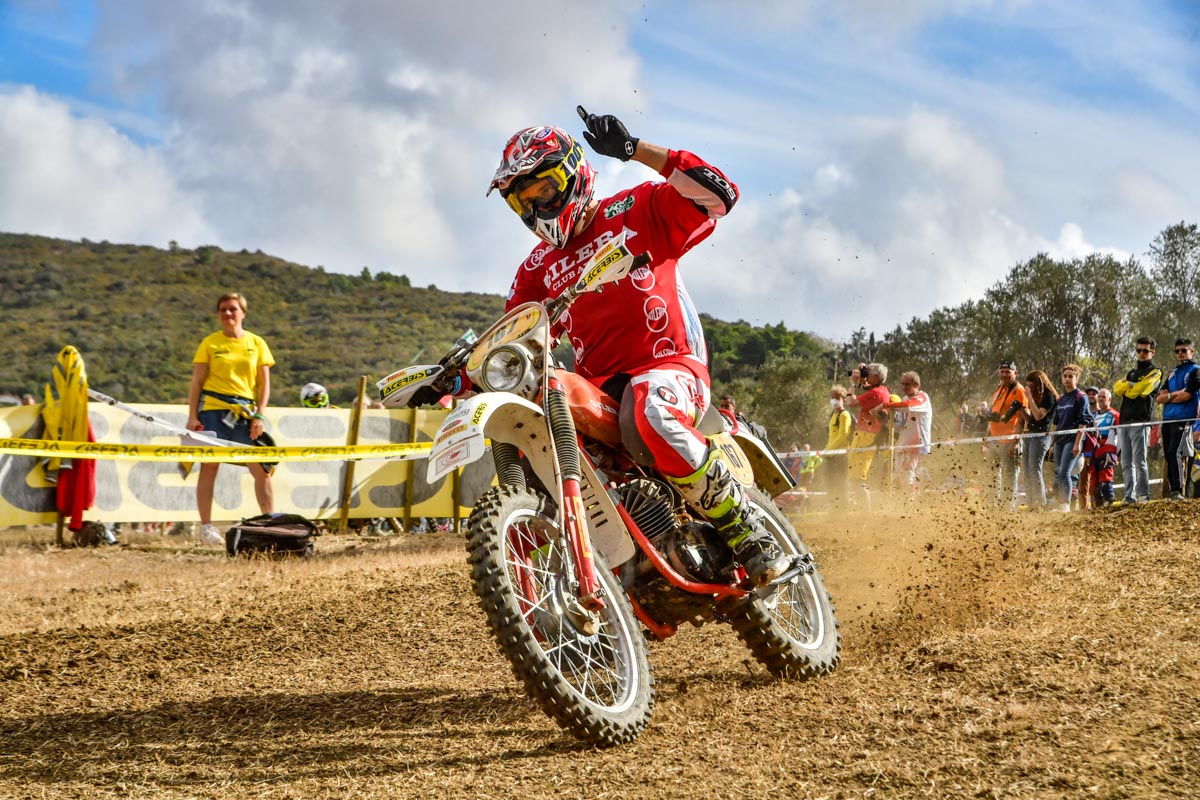 He was the protagonist of one of the most exciting Cross heats of the last day of the race, so much so that he was carried in triumph by his teammates after crossing the finish line in first position: the standard bearer of the Gilera Club Arcore, Marco Franceschetti (Gilera 125) concluded the FIM Enduro Vintage Trophy at the foot of the podium in the C4 class. 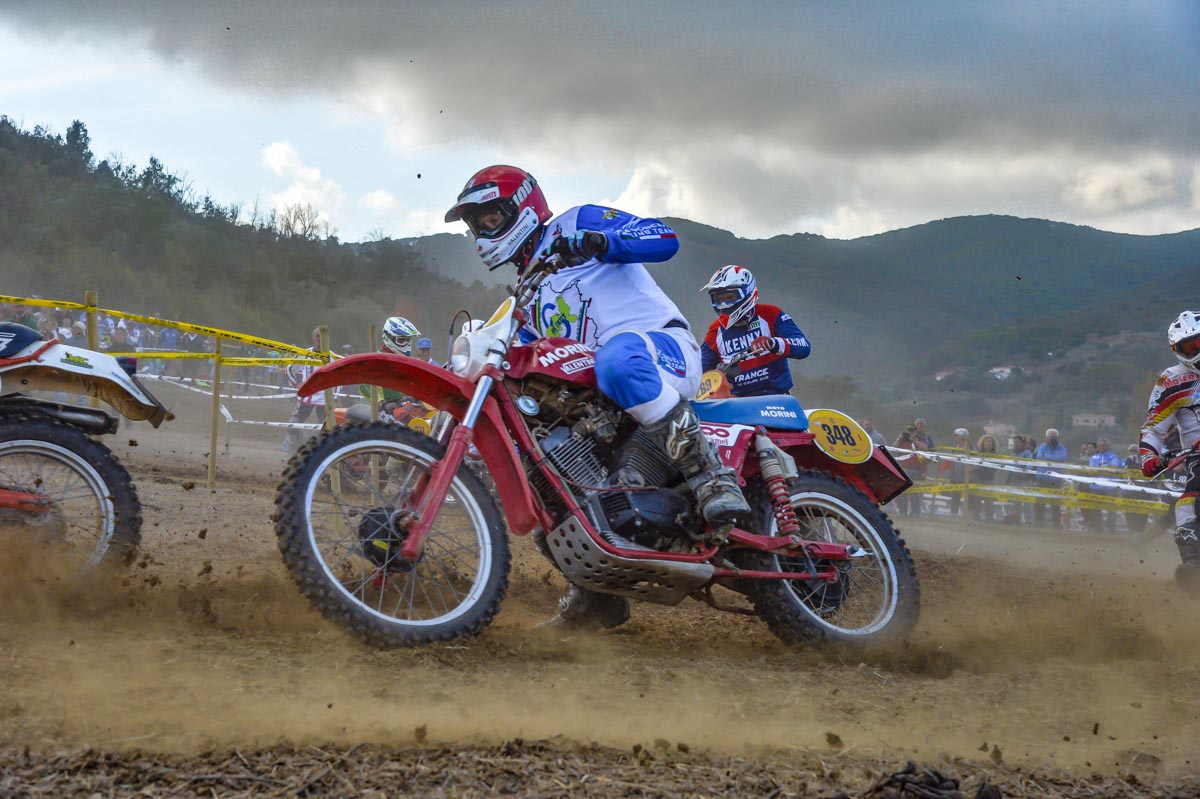 Remembering his brother Massimiliano, Pierluigi ‘Ghigo’ Valentini led his splendid Moto Morini 500 in the race, very well and with all the necessary attention: in the C7 class, the Moto Club Pegaso rider finished in 18th position. 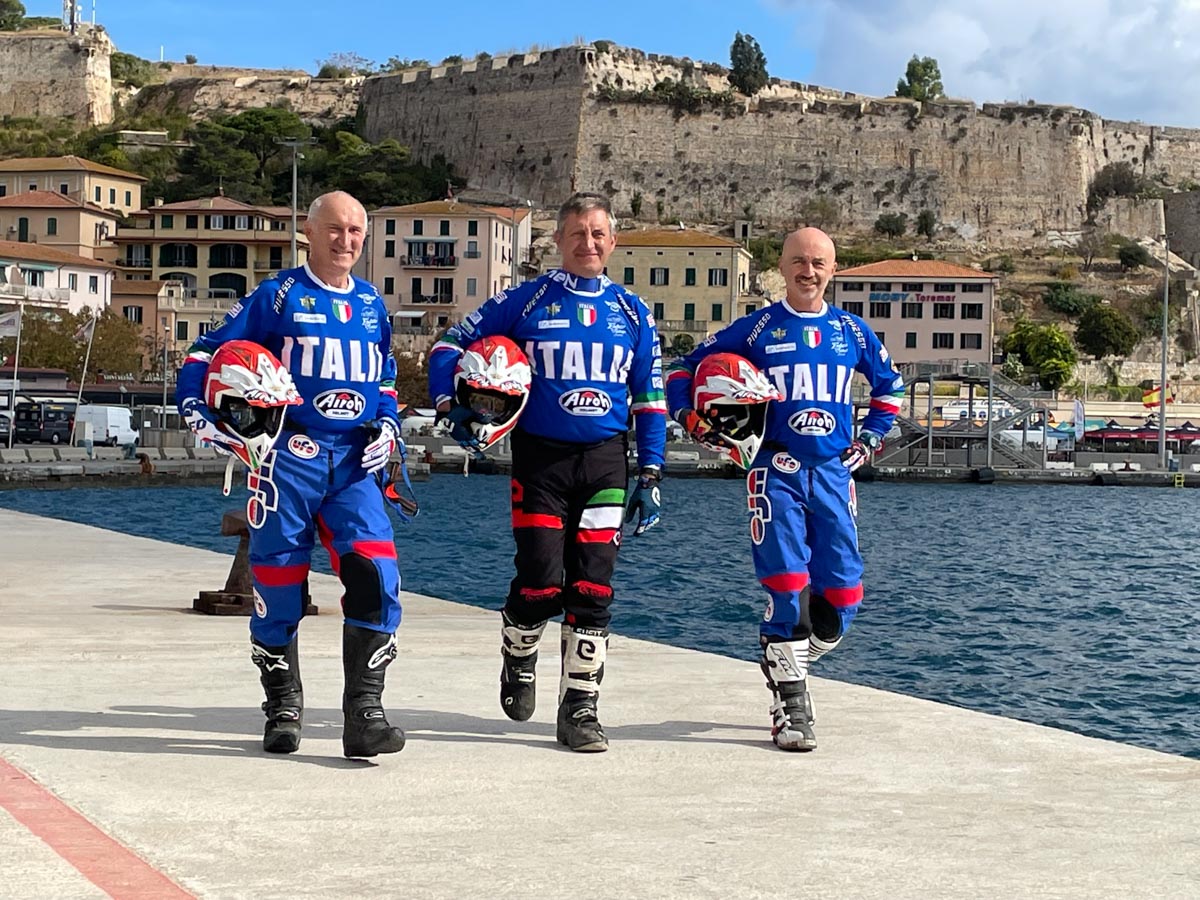 The riders who wore the Maglia Azzurra on the Island of Elba: from left, Giorgio Grasso, Tullio Pellegrinelli and Enrico Tortoli immortalized along the Molo Massimo in Portoferraio. 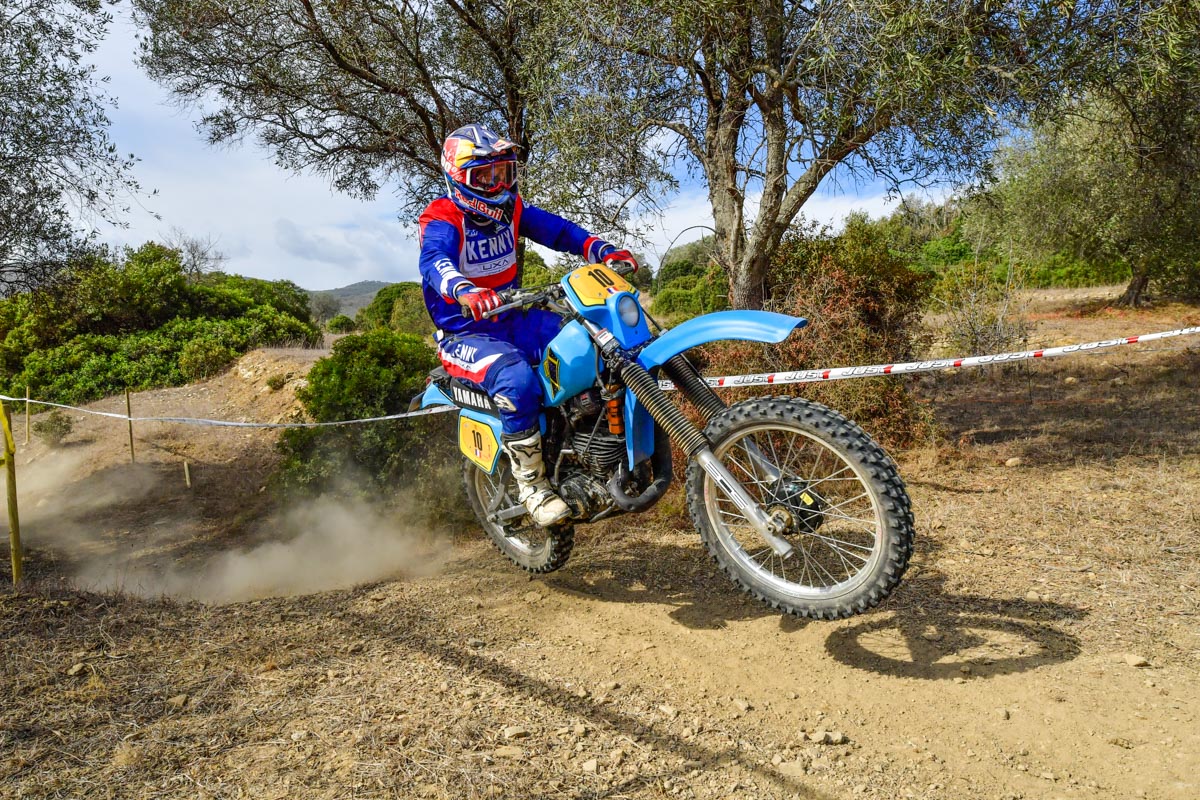 A spectacle to see in action the multiple champion from beyond the Alps, Stephane Peterhansel: on Yamaha 250, the Team France standard bearer won the C6 class and won the Vintage Trophy with teammates Laurent Charbonnel (KTM 400) and Thierry Viardot (SWM 250). 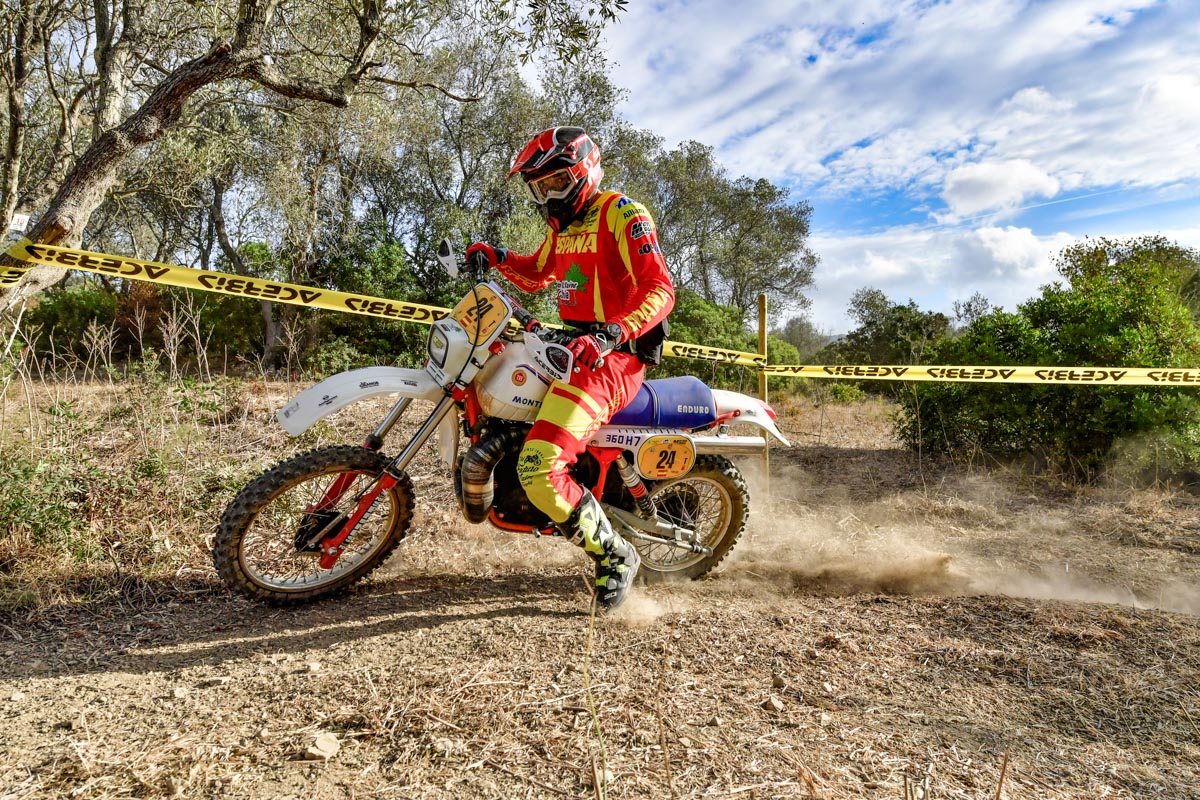 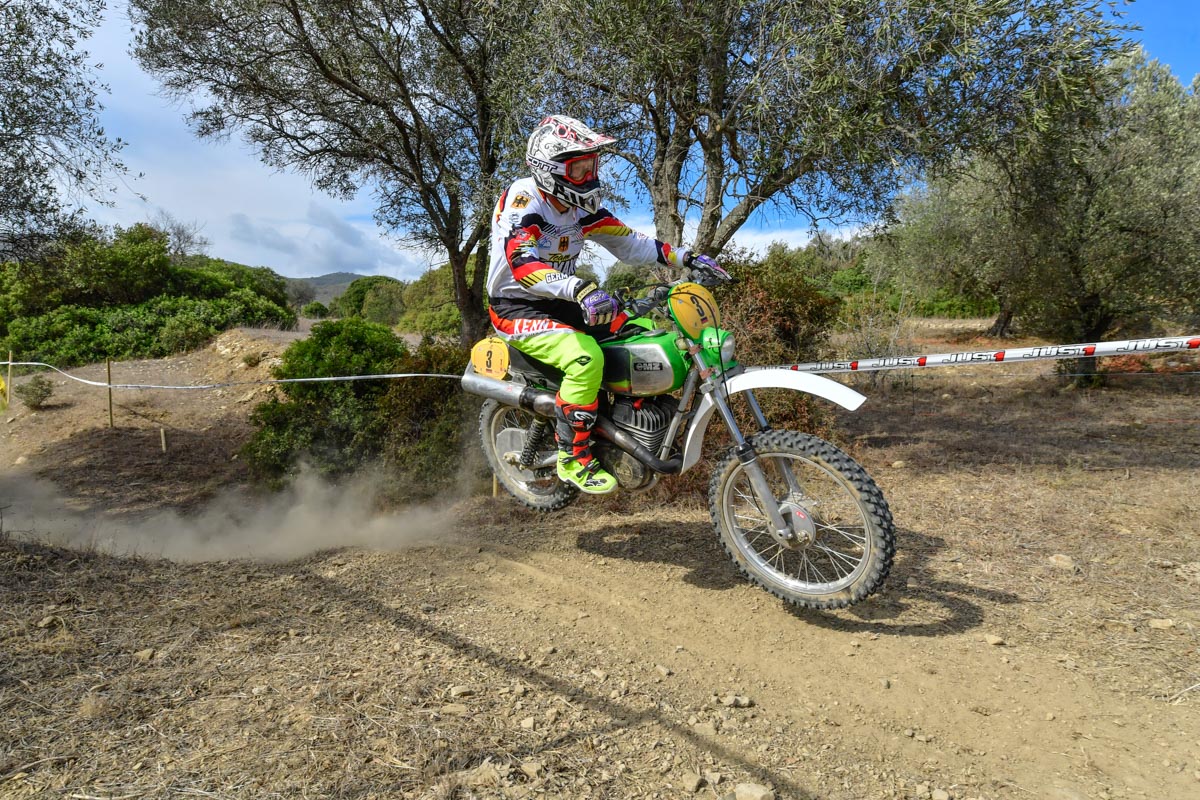 The German Champion of the former East Germany, Uwe Weber (winner of the Silver Vase in 1982 and the Trophy in 1987) on MZ 350: with his teammates of Team Germany, Bert Von Zitzewitz (Maico 250) and Johannes Steinel (Kramer 280) climbed on the second step of the podium in the Vintage Trophy and placed third in the A5 class. 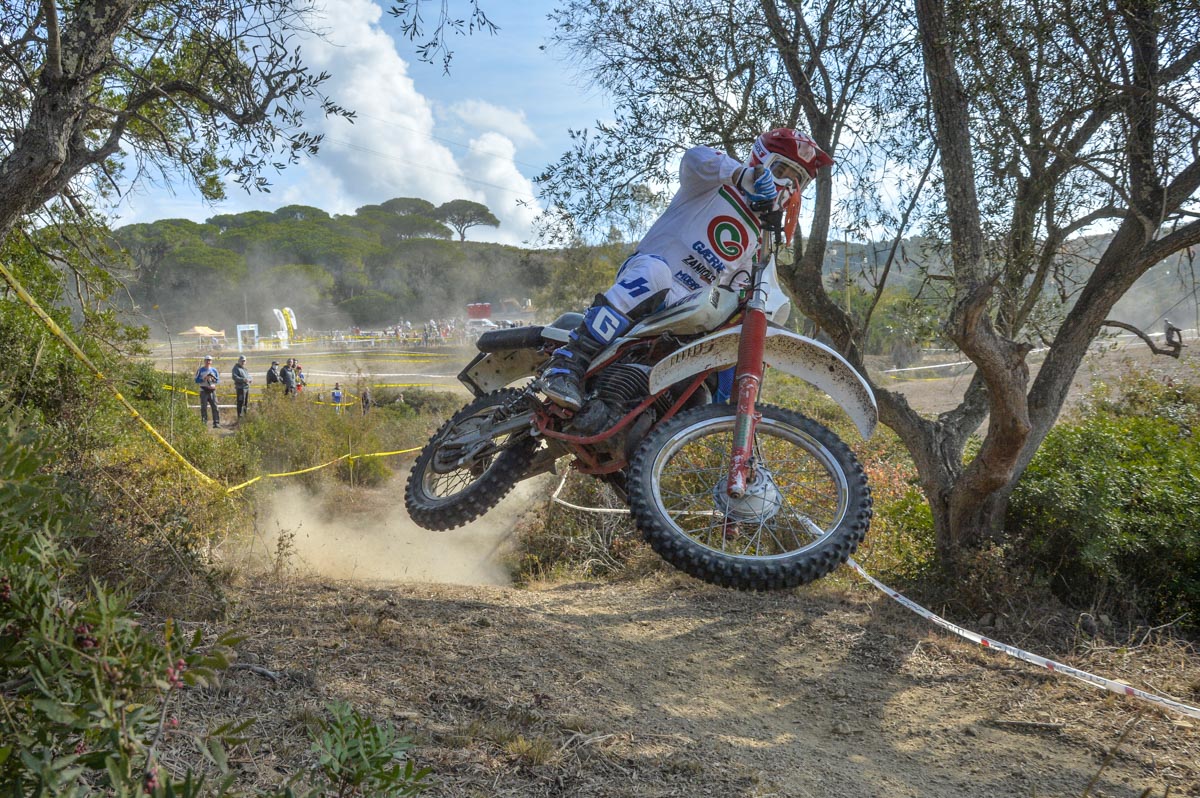 The World Champion Matteo Rubin (Moto Club Gaerne) whipped the KTM 250 provided by Franco Zaniolo to place the winning paw against Stephane Peterhansel, but he had to settle for second place in the C6 class at 33 seconds from mister Paris-Dakar. 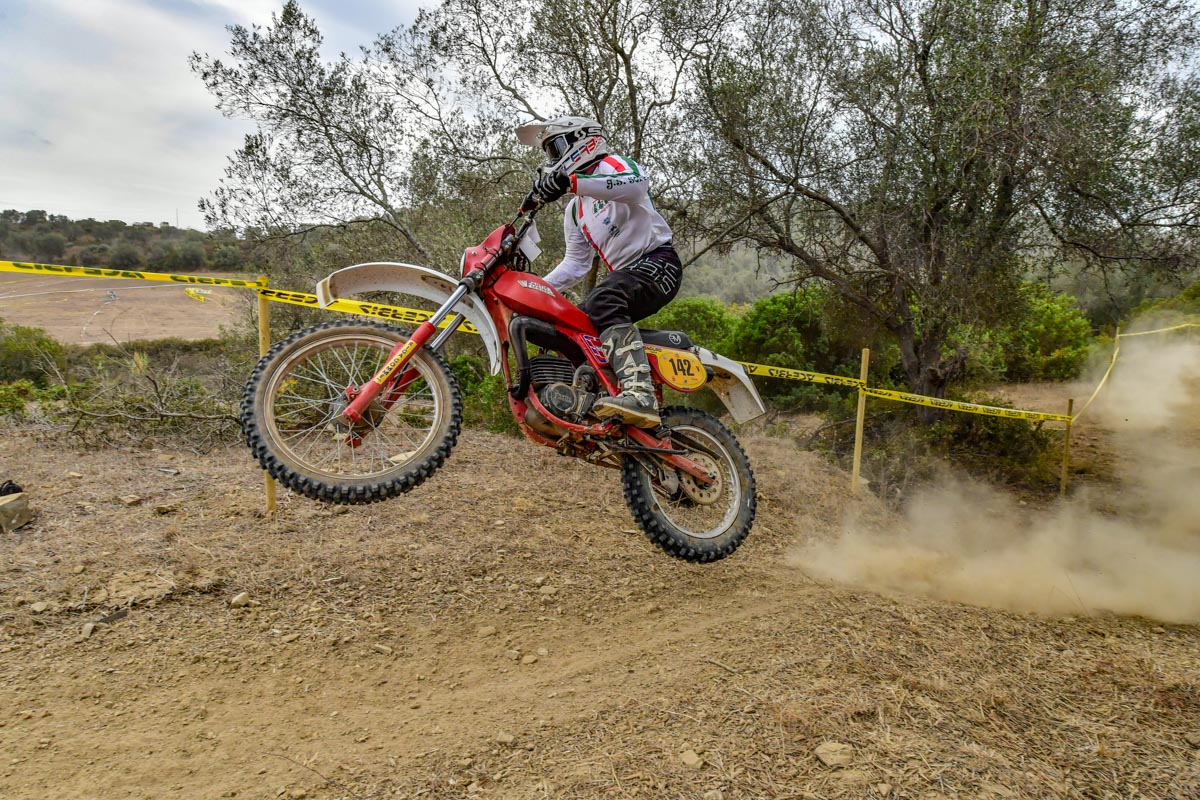 Victory for Angelo Signorelli on Fantic Motor 75 in the C2; with teammates Gianpiero Findanno (KTM 250) and Cesare Bernardi (Puch Frigerio 175) he honored the victory they obtained 40 years ago at the Six Days of the Island of Elba, when they conquered the Silver Vase together with Andrea Marinoni, placing third in the Vintage Silver Vase ranking. 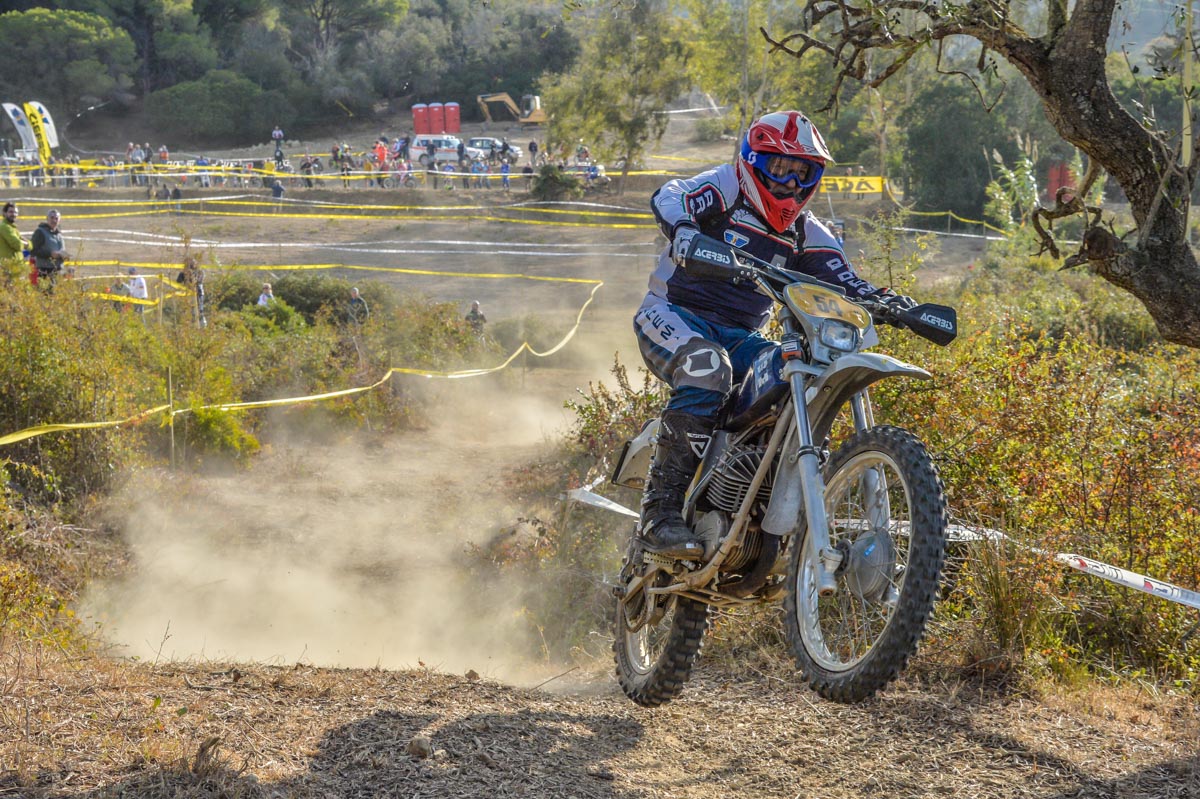 Today as then… Pierluigi Rottigni was the team leader of the team that, in 1975, at the Six Days of the Isle of Man, won the Silver Vase: they returned to the saddle of their SWM honoring that success of 46 years ago, Rottigni, Gualtiero Brissoni, Pietro Gagni and Attilio Petrogalli. Rottigni (SWM 175, A4 class) was forced to retire at the end of the first day of the race. 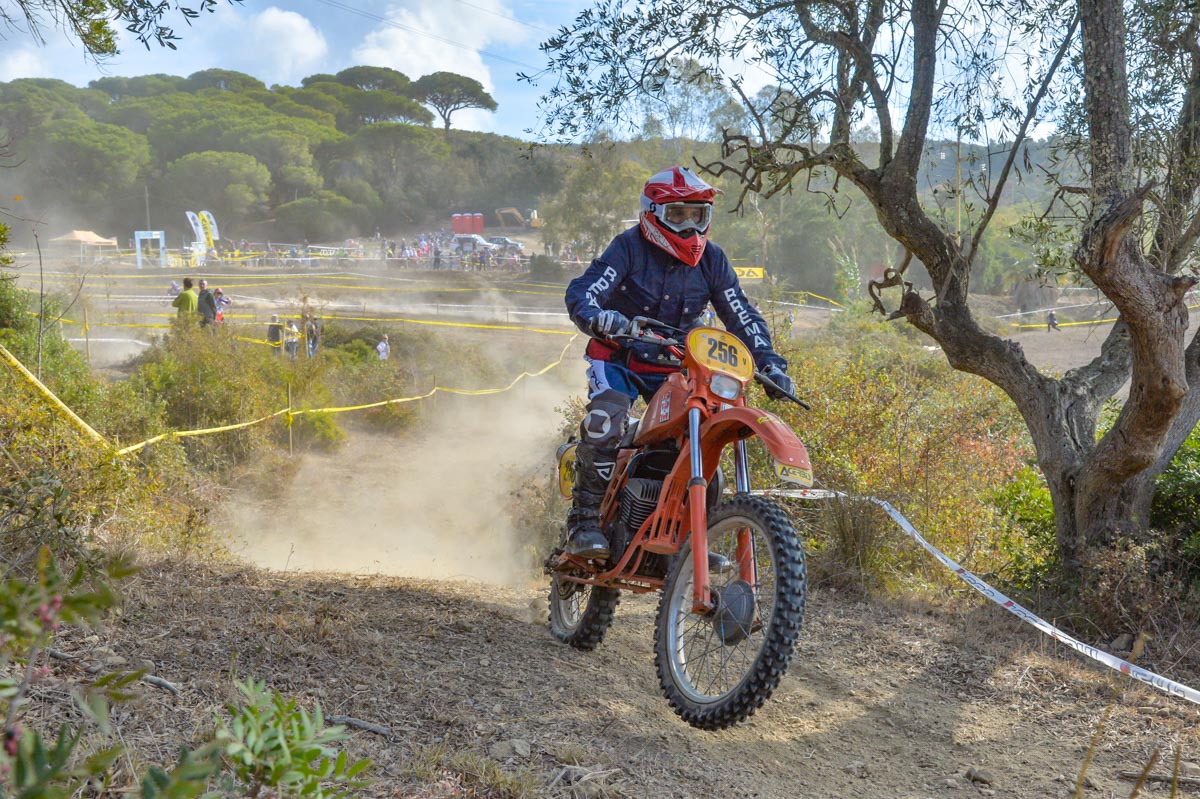 On SWM 280, the standard bearer of the Moto Club Bergamo, Gualtiero Brissoni obtained the 17th place in the C7 class. 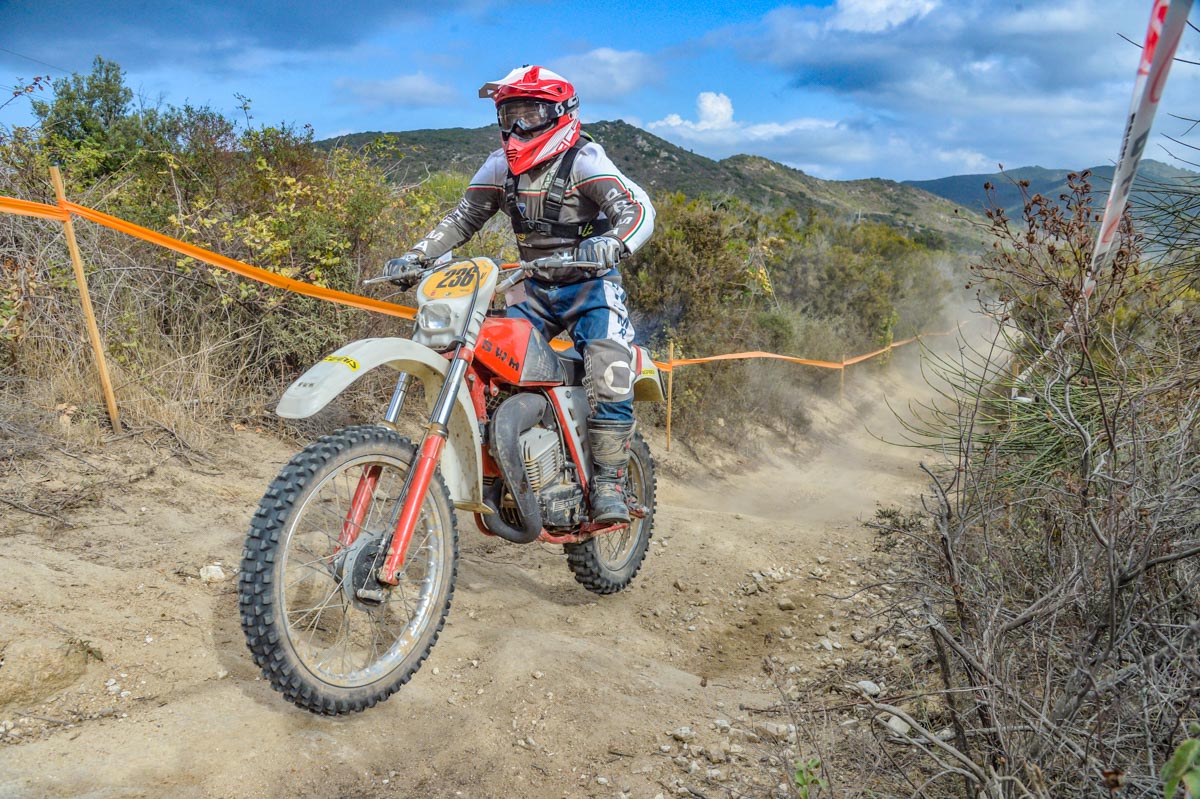 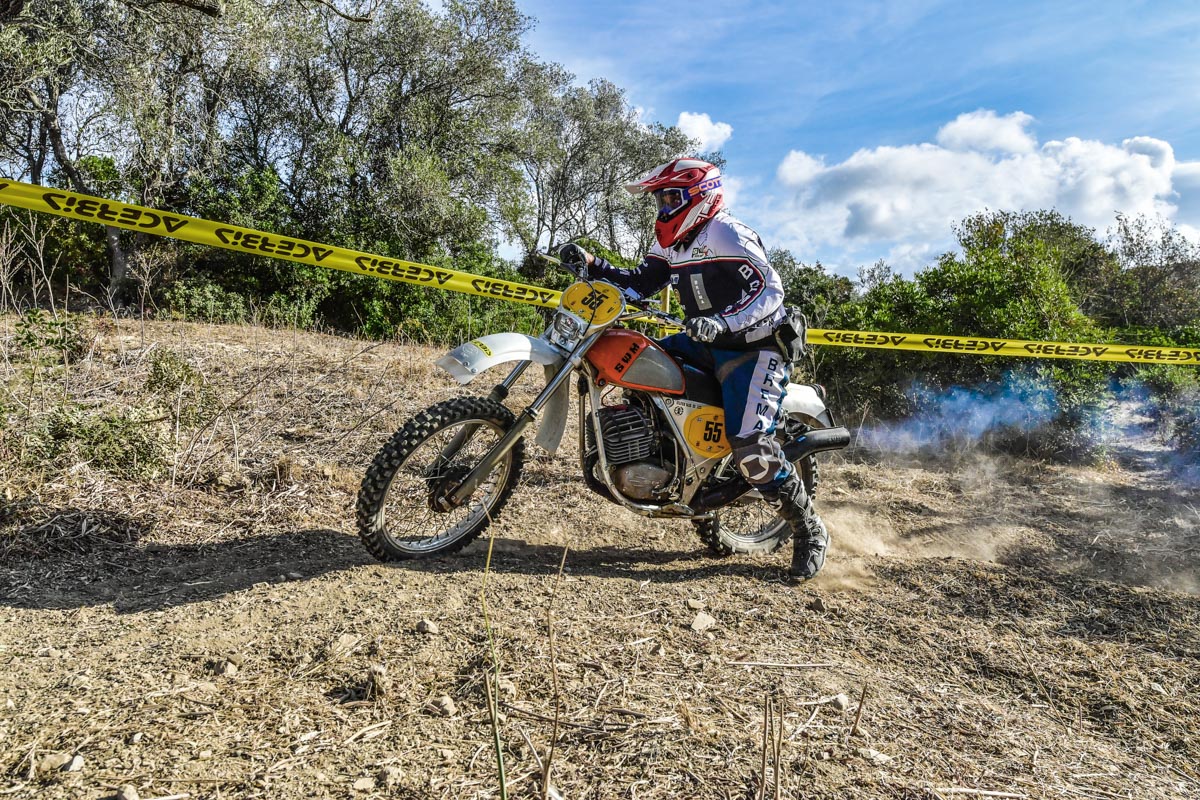 On SWM 125, Attilio Petrogalli (A3 class) of moto Club Bergamo was forced to retire at the end of the first day of the race. 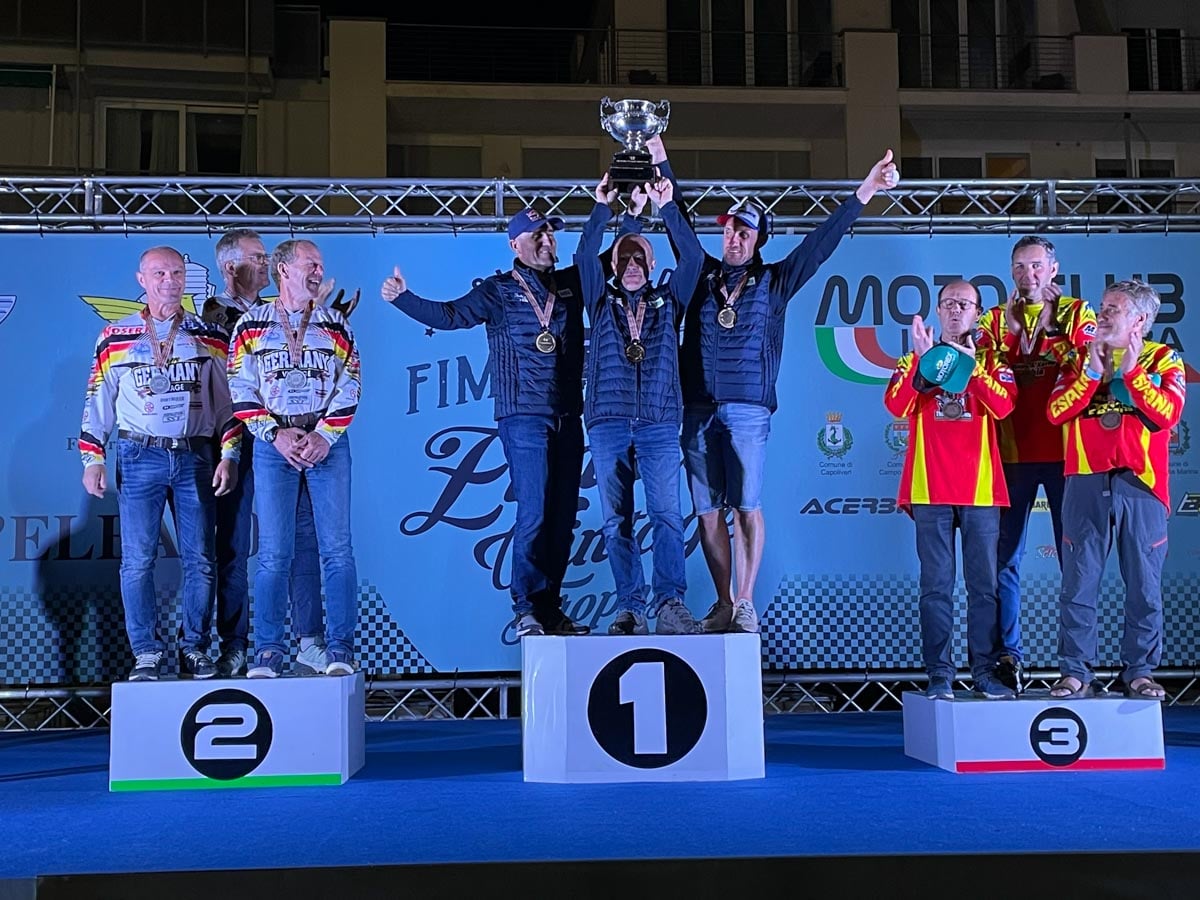 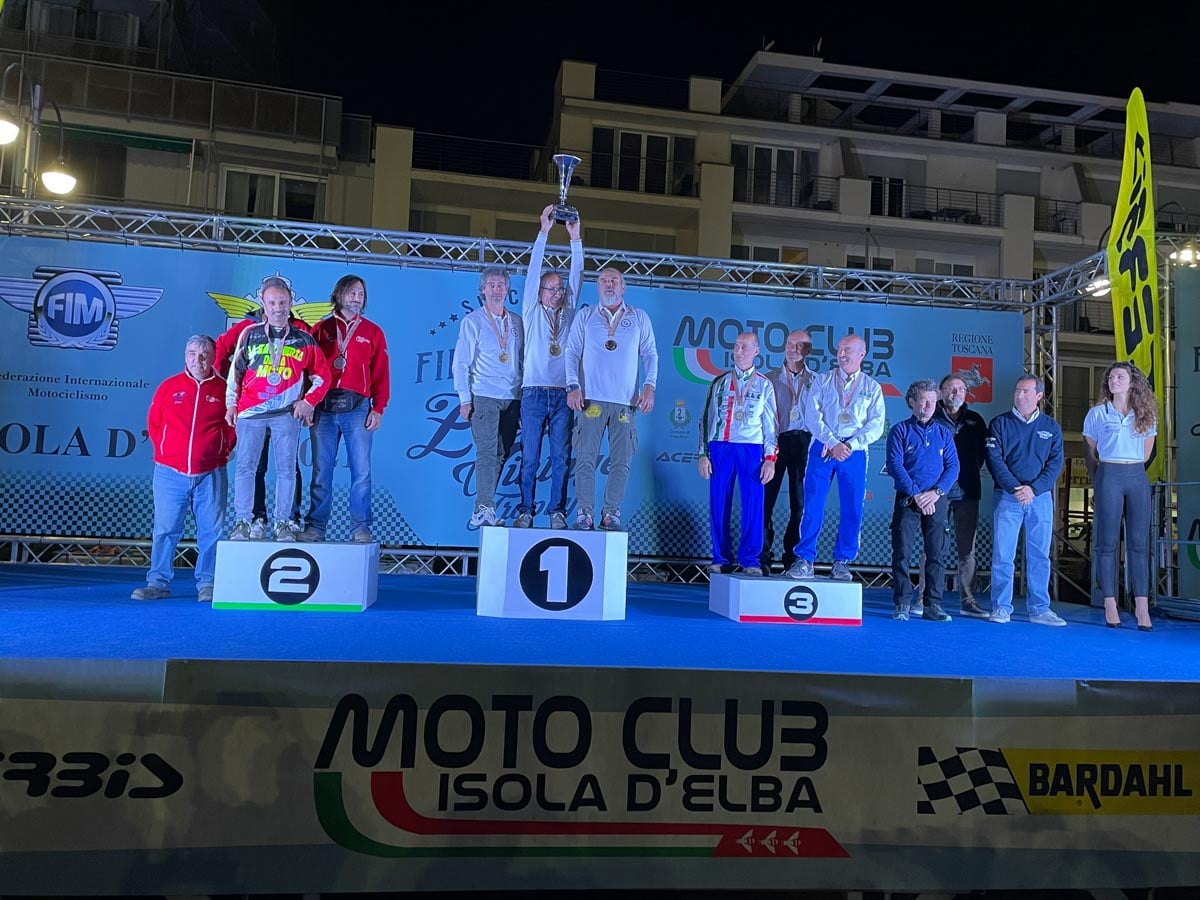 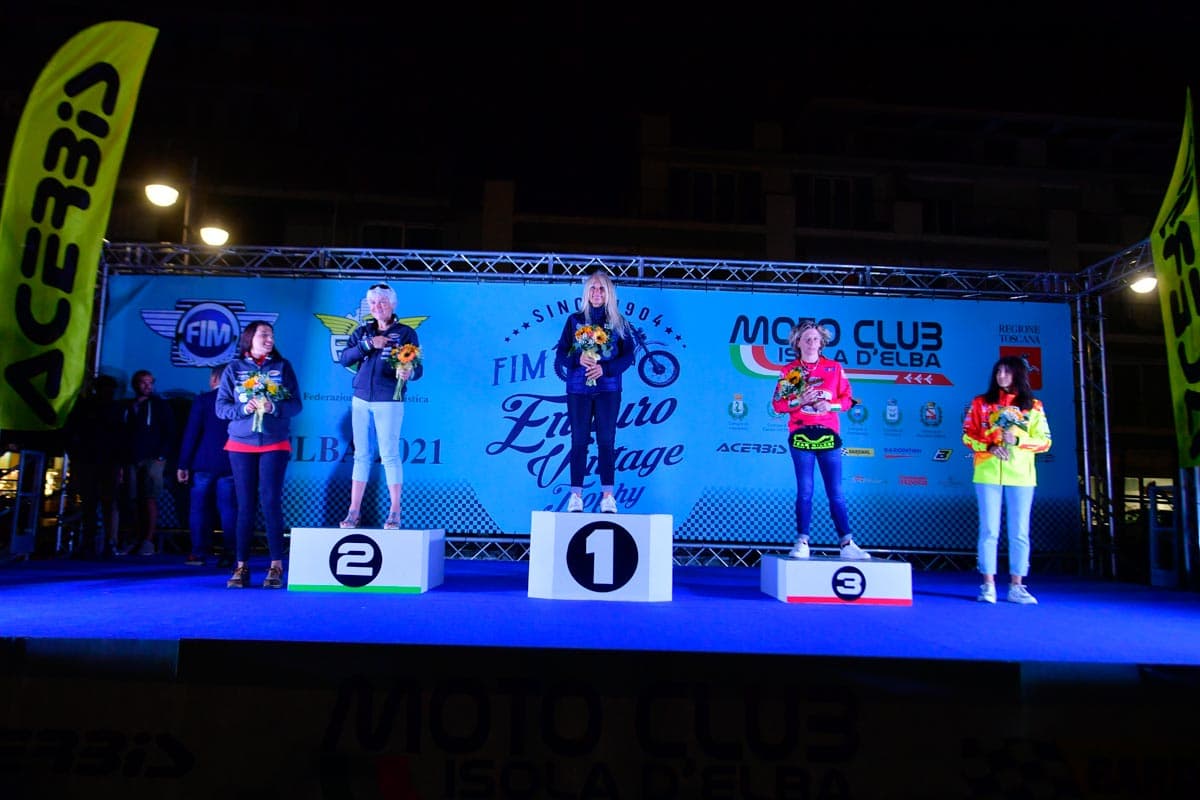