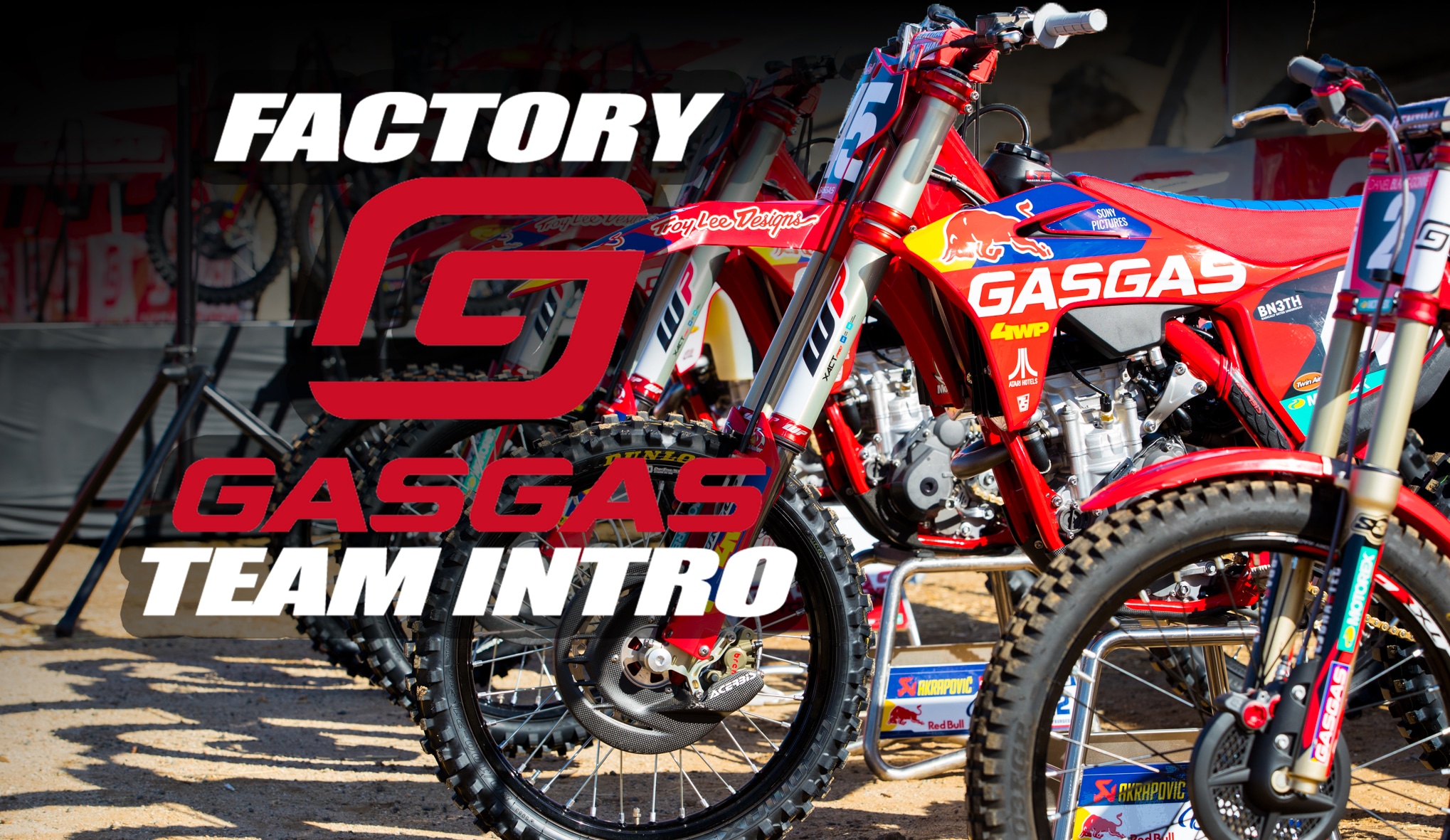 Back in 2019, KTM AG reached out and acquired yet another manufacturer to throw under their umbrella, this time being the GasGas brand. Since then, we have seen a couple of teams racing the newly developed GasGas motocross bikes in Europe at the MXGPs, a few appearances on the new enduro models during the abbreviated Hard Enduro series in the later parts of 2020, as well a few amateurs here in the United States that have already made the jump over to the newest steed in the Austrian company’s stable of motorcycles. What we hadn’t yet seen, though, was the newest crew of factory riders to be based out of the Southern California headquarters. Today we finally got that chance, where we got to head out to RD Field up above KTM’s shop in Murrieta to be properly introduced to the brand new Supercross, Motocross and GNCC teams, as well as the continuing trials squad. Here’s who all is going to be on the other red machine in 2021:

Although the GasGas brand is brand new to the scene of both Supercross and Pro Motocross, they don’t have to start completely blind. Obviously they have the knowledge and knowhow from their sister company’s experience, but they get the added benefit of also being the continuation of what used to be the Troy Lee Designs/Red Bull/KTM 250 team, now just with a 450 roster on top of it all. So, even though it is a new brand coming into the stadiums of Supercross, the crew coming along for the ride is already familiar with what’s going on.

The man making the biggest move from another team is former Factory Yamaha rider Justin Barcia. For the last three seasons, we have seen BamBam on blue, but with how the Factory Yamaha and Star Racing Yamaha teams merged, along with the rebranding of the Troy Lee Deigns/Red Bull team going from KTM to GasGas, the red bike just had a bit more to offer to the New Yorker. For 2021, Barcia will be competing on the GasGas MC450F in the premier 450 class.

Making a slightly lesser leap from team to team is Michael Mosiman, who just traded in his Rockstar Energy/Husqvarna hat for a Red Bull/GasGas one and headed next door to his new shop. Mosiman’s familiarity with how the Austrian motorcycles operate will allow him to keep progressing as he has been for the last few years now. The number 42 is looking to be fighting for main event wins and ultimately be in the hunt for the title at the end of the season.

Pierce Brown had the easiest “transition” of the three new TLD GasGas riders, as all that changed for him was the introduction of a new manufacturer, but still under the same tent. Brown is still recovering from the knee surgery he underwent last fall, but he will be alongside Mosiman on the GasGas MC250F.

Just like the Troy Lee Designs/Red Bull/GasGas team, the Coastal racing effort isn’t having to start from scratch. For the last few years, the team has been competing on the east coast on board Husqvarnas, but now will be making the move to take over as the Factory GasGas off-road racing team starting in the 2021 season. With GNCC legend Barry Hawk managing a strong team of talented riders, the team has hopes for great things to come this year and beyond.

GasGas Coastal Factory Racing will host a two member squad in the pro ranks at the GNCC events in 2021, one in the XC1 division and the other in XC2. Their pick for the XC1 class is returning rider Ricky Russell, who signed with the Coastal organization for the 2020 season, but ended up having a pretty severe injury part way through the year. Now that he’s back healthy, Russell is ready to jump on the new machine and make a great renewing debut of the GasGas brand. Johnny Girroir will be manning the EX250F in the XC2 class. Girroir makes the move over from the Trail Jester’s KTM team, where he came really close to clinching the title in 2020. Girroir looks to bounce back in 2021 and secure what was almost his last year.

The only riders at the intro who have already been competing on the GasGas machinery were were the two on the Factory Trials team. Both of them come into the 2021 season with at least a few years of experience on GasGas, so they will definitely be comfortable from the get go.

GasGas’ Men’s Pro rider on the team is Daniel Blanc-Gonnet, who not too long ago was competing here on RD field for the inaugural California Trial Invitational presented by GasGas. At the event, he didn’t place where would have liked, but after a few months off the bike, he was still happy to be riding again. After watching some of the things he did today on the trials course, it’s safe to say that the extra time under his belt is paying off nicely. The other member of the Factory GasGas Trials team , Madeleine Hoover, is also still recovering from knee surgery, so she wasn’t able to ride today either. It won’t be too much longer before we see her back on the bike, however.