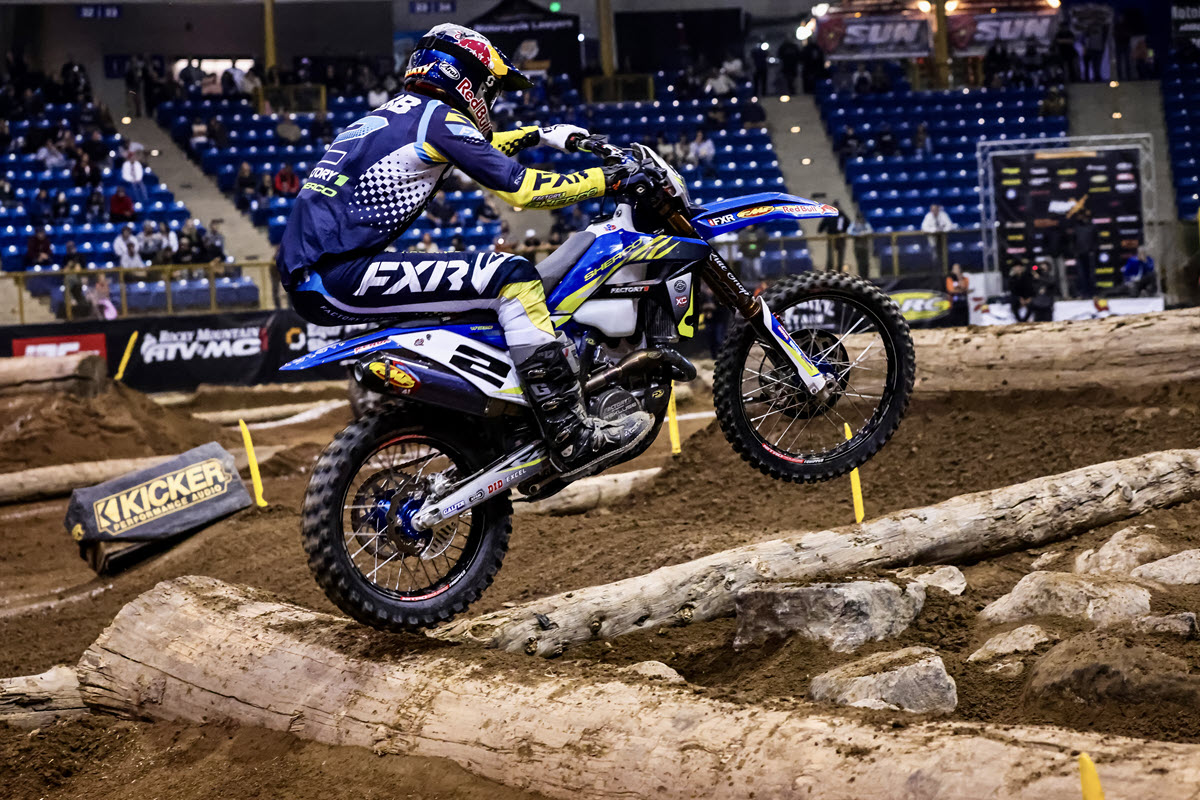 The National Western Complex in Denver, Colorado hosted the final two rounds of the 2021 GEICO AMA EnduroCross series and for the second night in a row, FactoryOne Sherco rider Cody Webb took the victory. After missing the first four rounds due to a wrist injury, Webb left his mark on the season with 1-1-2 moto finishes. Rockstar Energy Husqvarna rider Colton Haaker clinched his fifth series championship the night before and ended the season with a second overall finish in Denver with 4-2-1 moto scores. GasGas rider Max Gerston earned his second overall podium finish of the season with 3-3-4 finishes.

For the second night in a row, Colton Haaker beat out Cody Webb to set the fastest hot-lap time to earn the first gate pick for the first of the three motos. Haaker had a 44.150 lap compared to Webb’s 46.426. TM rider Ty Cullins was next with a 46.817. Cory Graffunder was fourth fastest with a 49.058 and Gerston was fifth with a 49.417 despite stalling briefly in the final rock corner.

Haaker blasted to the front to start the first moto with Cullins and Graffunder close behind. Webb completed lap one in the fourth position as Haaker had opened up a gap on the field before getting stuck in the tire mountain on lap two. Cullins took over at the front with Graffunder, Webb and Haaker in tow. Haaker went down again on lap three while Cullins appeared to be headed to his first-ever moto win before a small mistake in the final rock turn put him on the ground and allowed Webb to take the lead, which he held to the finish. Cullins recovered for second in the moto and Gerston finished third. Haaker finished fourth after a third crash held back. Cooper Abbott finished fifth in the moto.

Cooper Abbott, Tim Apolle and Cody Webb came out in front of moto despite starting on the second row due to the gate picks being reversed from the moto one results. Abbott battled with Webb for the lead for several laps while Haaker worked his way into third. Webb pulled a small gap upfront while Abbott started battling with Haaker for second. Haaker finally made a pass stick on Abbott, who then dropped back to sixth with a mistake. Once in second, Haaker closed the gap on Webb but had to settle for second. Gerston fought off a pack of tough riders to take another third-place finish. Graffunder finished fourth and Cullins recovered from a poor start to finish fifth.

Haaker and Webb rubbed elbows all the way to the first turn to start moto three and Webb ended up getting pushed back into the pack and then went down in the second corner. Will Riordan, Cullins, Abbott and Haaker completed lap one in that order while Webb came through to eighth. Cullins took over the lead for about a half of a lap and then went down and held up Abbott and Haaker. Haaker took over the lead ahead of Graffunder and they held those spots for a few laps while Webb moved up to third. Webb took over second and made a hard charge for Haaker but ended up second in the moto to take the overall win. Abbott made some late-race passes to finish third in the moto. Gerston finished fourth and Cullins moved back up to fifth at the finish.

The top three overall was clear with Webb’s 1-1-2 topping Haaker’s 4-2-1 and Gerston’s 3-3-4 earning him the final podium spot. Cullins finished fourth overall with 2-5-5 finishes on a night that he led several laps on his TM.  Abbott had his worst finish of the season with fifth overall on his KTM via 5-6-3 moto scores. But it was still enough to hang onto second overall in the series.

Cody Webb: “To win two races back-to-back like this incredible. Last night meant so much to prove that I could do it and tonight proved the consistency. I didn’t enjoy the track as much but fitness wise, I rode better tonight because I was better at controlling my pace and breathing. It was a great way to end the season.”

Colton Haaker: “I felt like I was riding really well and everything, but things weren’t going the way I would have liked. I salvaged a fourth after a pretty scary crash and I had some issues with lappers but that’s EnduroCross, it is hard to stay clean. I put it together in the last race to secure the win on that one.”

Max Gerston: “At the end of the day, I am super happy with the program that I put together with GasGas, Klim, Motul, Mitas. I scratched and clawed to be up here and I am the only guy up here that worked construction and did drywall to pay the bills so it makes it more special.”

Cooper Abbott: “I am not super happy with the final two rounds but the goal was to finish top three in the championship and I benefited from a few guys getting hurt but I think I belong up here now and will keep working hard to build on this for next season.”

“It was a good year,” said Turner. “I won every round but one. Today I knew what I had to do and Louise was right there the whole time and I felt the fatigue from riding two classes so I was happy to take the Women’s class win and fifth in the Intermediate main netted me fourth overall in that class. I am looking forward to next year.”

The Intermediate class came down to a last lap, last turn collision for the race win and season championship. Coleman Johnson (Sherco) came into the race with a three-point lead over Nathan Rector (KTM). The two riders fought to the front of the pack and Rector made an aggressive pass attempt on Johnson in the final turned that resulted in both riders going down. TM rider Agustin Pascal passed both riders to take the win and Rector got up to take second and the championship. Travis Griffiths (KTM) finished third in the race and Johnson recovered for fourth.

Devin Funaro won the Amateur main event on a Yamaha. Ray Amos finished second no a GasGas and Justin Leineweber rounded out the podium on a TM.

For the second night in a row, Keith Wineland won the Vet 35+ class on a Yamaha. Fellow Yamaha rider Joey Hamilton finished second and Ryan Gouveia rounded out the podium on a TM. Craig Thompson raced a Husqvarna to fifth in the race to earn the overall season championship.

There was a 50+ class for the Denver events and for the second night in a row, Thomas Headman took the win on a GasGas Trials bike. Michael Kellog finished second on a Beta and Scott Forrest rounded out the top three on a KTM.

The new Junior Trials class, limited to riders 12 to 17 years old was a great battle between three riders. Thirteen-year-old Murphy Aaron took the win on a GasGas. He was followed closely by Riley Bender, who was riding an Electric Motion and Jack Williford rounded out the podium and AMA Grand Championship results on a GasGas.

While this wraps up the 2021 season, plans are underway for 2022 with six rounds.