The 2021 GEICO AMA EnduroCross series kicked off inside the BOK Center in Tulsa, Oklahoma and Colton Haaker took the overall win to kick off his title defense. The Rockstar Husqvarna rider had perfect 1-1-1 scores in the three motos. Red Bull KTM’s Trystan Hart finished second overall with 2-3-2 moto finishes and RPM KTM rider Cooper Abbott rounded out the overall podium with 3-2-3 moto finishes. Haaker kicked off his day by setting the fastest hot-lap time to set the starting order for the first of three motos with a time of 35.621. Abbott showed his speed with the second-fastest time at 36.608. Hart was third with a 37.021 lap time. SRT Off-road backed Cory Graffunder finished fourth with a 38.300 lap and Will Riordan rounded out the top five with a 38.381 lap on his RPM KTM. 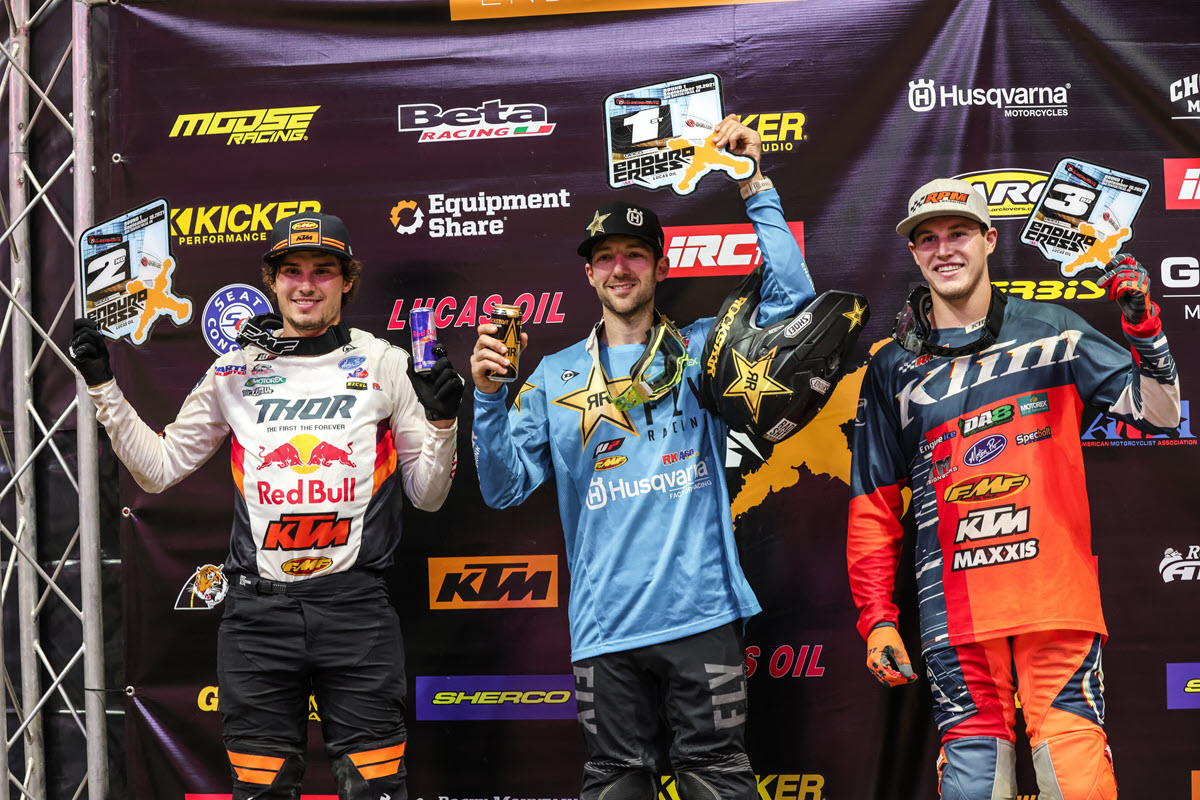 Hart blasted to the Moose Racing Holeshot in moto one with Haaker, Ryder LeBlond, Cory Graffunder and Abbott close behind. Haaker worked his way past Hart on the third lap of the race and began to edge away slightly. Abbott took a couple of laps to work his way past Graffunder and LeBlond to get to third. LeBlond held onto fourth place in the moto with Graffunder fifth. The second moto inverts the sixteen riders’ finish positions from race one for gate picks, so the top eight riders start on the second row. Canadian Branden Petrie took the holeshot from row one followed by Noah Kepple. Haaker made quick work to finish lap one in third place. Hart crashed in the Matrix on lap one and Abbott was seventh. Abbott was on the move and worked his way through to second place and Graffunder got up to third place, which he held until Hart finally made his way past on the final lap. Graffunder finished fourth and Petrie held on for fifth. In the final moto, Hart again took the holeshot with Riordan second and GasGas rider Max Gerston third. Haaker was in fourth but moved into second by the third lap and started to apply pressure on Hart. The two riders battled for a couple of laps and Hart fought back when Haaker finally took the lead. Haaker had a scare when a lapped rider crashed in front of him, but he took another win. Hart was second and Abbott managed to work his way to third in the moto and third overall. Gerston finished fourth and Riordan finished fifth in the moto.

For the overall results, Graffunder finished fourth with 5-4-10 moto finishes. Riordan finished fifth overall with consistent 8-7-5 finishes. Gerston finished sixth overall. LeBlond was seventh overall. German rider Tim Apolle finished eighth on a Beta. Petrie finished ninth overall on a KTM and Noah Kepple rounded out the top ten on a Husqvarna. Haaker was happy to be back racing indoors in front of fans. “To say that I missed the fans would be an understatement. The first six months of this year were tough for me because the Hard Enduros were not going well for me despite a lot of effort. I am so happy that EnduroCross is going strong and we can put on a great show for the fans.” Hart was not happy about finishing second overall and is looking to improve by the next race in Amarillo, Texas in two weeks. “I got a beat down. KTM wants to win and I don’t like getting second. That second race, I came up an inch short and went over the bars so I had to ride really hard get back up to third. I will work hard the next two weeks and come back stronger for the next one.” Abbott established himself as a solid podium contender with a great hot-lap and three solid motos. “I struggled with starts all night so I definitely made it hard on myself. I went 3-2-3 on the moto scores which I am happy about but I know I am there with those guys now. So I will work on my starts and work to battle more with those top two guys.

In the Women’s class, four-time Women’s EnduroCross champion Shelby Turner took the win on her KTM. Sherco rider Louise Forsley made a last-lap pass on Beta rider Morgan Tanke to take second place. Tanke held on for third. The Intermediate class main event was one of the most exciting races of the night. Coleman Johnson took the win on a Sherco. Gavin McCarthy led most of the race and finished second on a KTM. Shelby added another podium to her evening to round out the podium on her KTM. Sherco mounted Dylan Lozano won the Amateur class main event in his first-ever EnduroCross. Brian Wedlake finished second after being docked a position for missing a section of the Matrix on the last lap. Ruffin Dodson rounded out the podium. In the Vet class, Yamaha rider David Stirm edged out Craig Thompson (Husqvarna) to take the win with the two riders crossing the finish line with their handlebars locked together. Kyle Strever rounded out the podium on a Yamaha. Jack Williford raced a GasGas to win the inaugural Junior Trials class, which is limited to riders that are 12 to 17 years of age. Dylan Lozano finished second on a Sherco and Ruffin Dodson rounded out the top three on a Sherco.

The next round of the 2021 GEICO AMA EnduroCross series will take place on Saturday, October 2nd in Amarillo Texas.