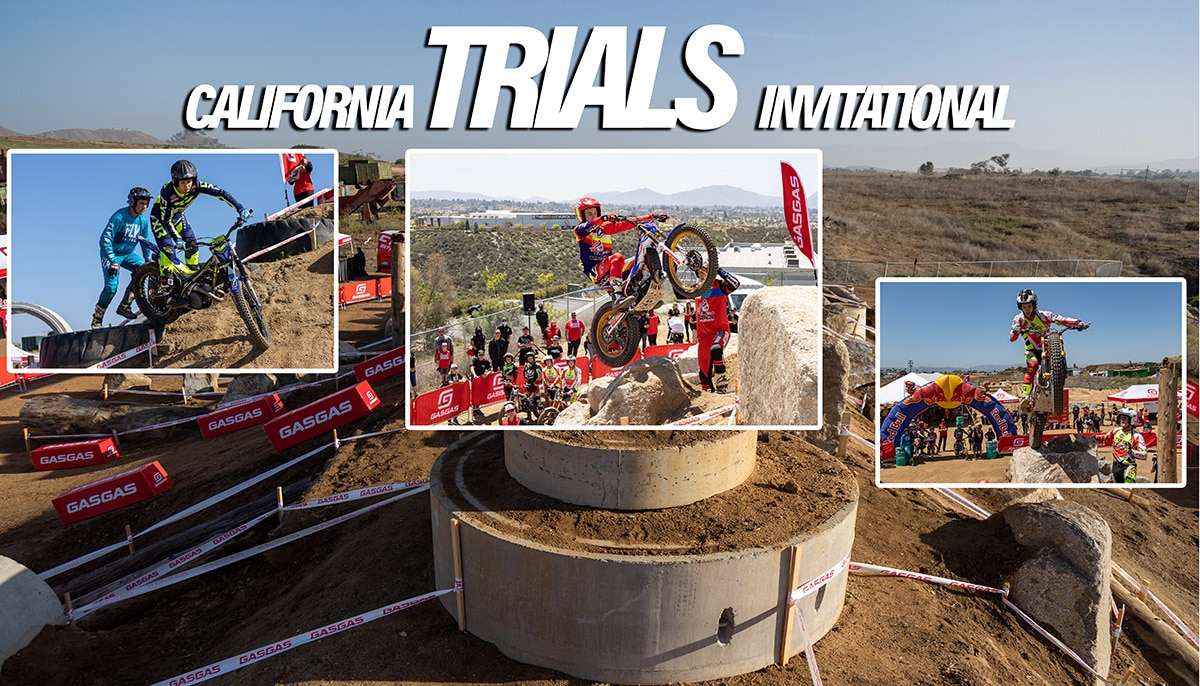 Josh Roper and Alex Niederer waited atop the course of the 2021 California Trial Invitational presented by GASGAS for official scorekeeper Jared Malmquist to tabulate the overall results. The two were tied on overall points. Results revealed they also had the same number of cleans. Same number of fives, and same number of ones, twos and threes. It was a deadlock tie for the overall win at the second-annual event held at the GASGAS North America headquarters in Murrieta, California.

“I swear, we didn’t tell them to do this,” joked announcer Jason Weigandt. You couldn’t have scripted a tighter competition—good news considering the media turnout, which included a Fox Sports production team. Getting the sport of trails back into the mainstream has long been a goal of GASGAS’ Geoff Aaron, the 10-time national trials champion and mastermind behind the Red Bull-backed event.

“Yeah this is great,” said Aaron. “We tried to improve on what we did last year. Last year was already a decent success in my mind. We hosted an event during tough times and it came off really well and got a lot of publicity and riders really enjoyed it. This year we tried to beef it up, work with some of our partners and make it even better. It’s awesome to get some national TV coverage and have companies like Red Bull support it.”

After two rounds of the manmade six-section course, the perfect tie across their results left Roper and Niederer considering arm-wrestling for the overall win. The tipping point came down to who was the first to score a point, handing the grand victory to Factory TRRS USA rider Josh Roper. Beta USA rider Niederer was left to collect second place while defending champion Karl Davis edged out Daniel Blanc-Gonnet for the final podium position.

“That is actually the first time that has ever happened to me where we’ve tied on cleans, ones, twos, threes, and fives,” said Roper. “So to have it come down to who took the first point was pretty crazy.”

The overall consensus was that it was a fun, but somewhat stressful day for competitors. Most of the trials athletes have never competed in an environment like this—a manmade course rather than natural terrain, with a crowd of industry eyes, television cameras and announcers only feet away.

“This is a really tough competition,” said Women’s Pro winner Louise Forsley. “I think there’s just so many eyes on you, the pressure of going back and forth, having to wait for your turn to ride, and these are just really tricky sections, too. There’s a lot of variables in these sections. So it was tough.”

Despite Forsley “not riding like myself,” the Sherco rider managed to defend her championship at the event, and edge out GASGAS rider Maddie Hoover by a single point for the overall. TRRS rider Kylee Sweeten was only one point back in third, the trio only separated by three points at the end of the day.

In the Men’s Pro overall, the ties continued beyond the top four, with brothers Alex and Will Meyers battling for fifth with 40 points apiece. While Sherco’s Will Meyers dazzled with a few brilliant cleans, the 16-year-old ultimately yielded to his older brother, Alex, who had three cleans to Will’s two.