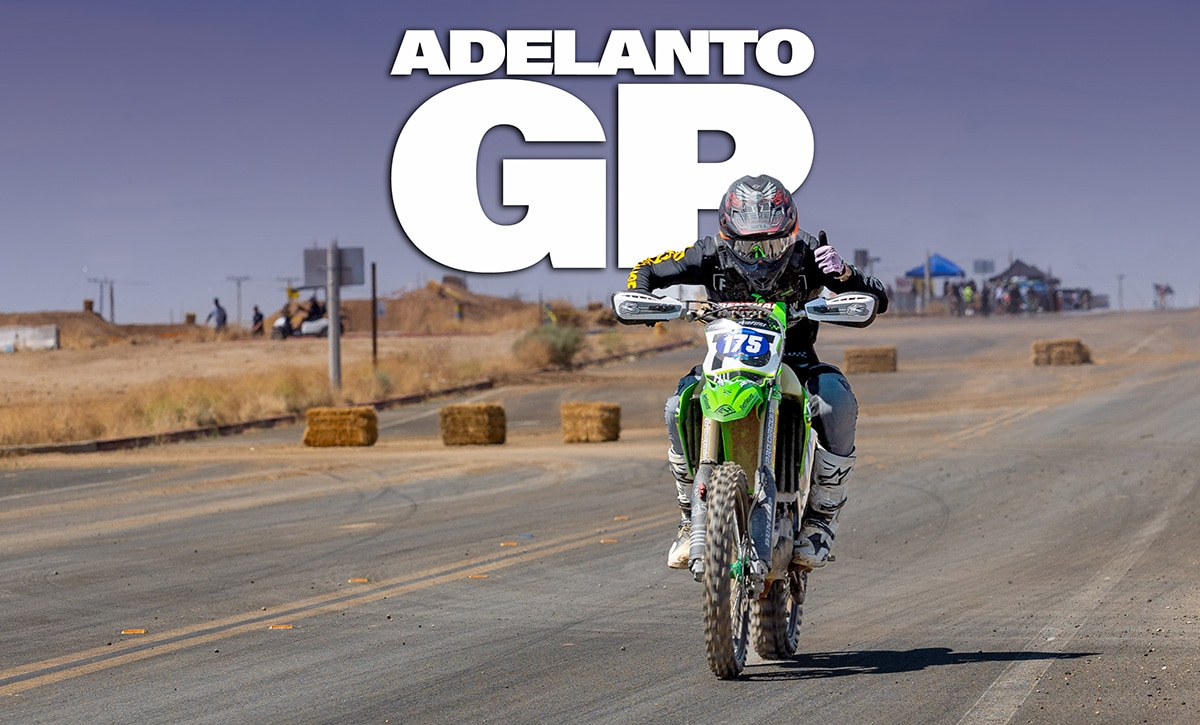 The Adelanto GP made its return to the racing calendar in 2021, this time as a standalone event and not part of the National Grand Prix Championship (NGPC Series, previously known as Big 6 Racing) as it has been in years past. None other than Adelanto’s own Ty Davis of Zip Ty Racing, former King of Adelanto, opted to promote the race, something he hasn’t done in over 20 years. It was no easy task for Davis, but he managed to make it happen on the Memorial Day weekend, with two days of dirt bike racing (Friday and Saturday, May 28-29) followed by a day of four-wheel competition with ATVs and UTVs (and even three-wheelers!) taking to the Adelanto Stadium course on Sunday.

Pro races were held in a three-moto format with the final race taking place on Saturday. In the end, it was Fasthouse-backed Trevor Stewart who rode his Kawasaki KX450 to the big sweep. Purvines Racing Yamaha’s Tyler Lynn finished second on Saturday ahead of Honda-mounted Sean Collier, who made the last-minute decision to try his hand in off-road racing.

“It was definitely a good day to be a motorcycle racer,” said Trevor Stewart. “Obviously with riding yesterday, I knew what to expect today. I wanted to get a good start and pull away early and go for a cruise. I was a little shot after yesterday. We did two 45-minute gnarly sprints. So I’m a little worn out, but I knew what I had to do today, obviously, to win all three of them.”

The entire Purvines Racing team had a good showing, with Tyler Lynn finishing second, and Thomas Dunn topping the 250 Pro class. Lynn got out to a second-place start on Saturday, and gave it everything he had to keep Stewart in his sights. Lynn couldn’t keep the Fasthouse Kawasaki rider from walking away, and from there managed a lonely race to finish second overall. “I kinda stuck with him for maybe the first lap and a half but he just left me after that. I got a little bumped up. And then just tried re-cooping and tried some things I need to work on for further races. Just had a lot of fun. Glad I was able to come out. Ty Davis put on a great event.”

There was a fair bit of back and forth in the 250 Pro class, and after a somewhat rough ride, and after Robby Schott retired with mechanical issues, Purvines Yamaha’s Thomas Dunn managed to pull off the win.

“I got off to an okay start behind Robby, he was riding really good,” said Dunn. “I was just trying to be smooth and pick my lines but I tucked the front wheel in the back [and crashed] so went back to third and had to catch up for the rest of the race. I caught up to Clayton [Roberts], passed him and was just flowing around. Then Robby had some bike problems over there [and pulled off]. From there I just tried to stay consistent for the rest of the race. I ended up crashing again, but then just tried to push through and ride as good as I could.”

The Mini Futures class had the rare opportunity to race alongside the Pros on Saturday, contesting the same course with the same endurocross obstacles on the famous infield section of the Adelanto GP. The 85-112cc racers tackled the wood pit and log crossings alongside the Open Pro, 250 Pro and Women Pro riders, and proved they could hold their own. “These kids go fast,” said Ty Davis. “There’s like eight or 10 of them that are pretty darn fast at Big 6 and WORCS. And I thought it would be cool to race them with the pros because it just gives them that credibility. Those kids are our futures. Those are the kids that are coming up. In two years they’re going to be on 125s. So I just wanted to give them some real legitimacy. And the kids liked it.”

The entire event was an uphill battle for Promoter and Race Director Ty Davis, who might have suddenly remembered why he hadn’t promoted an event in over 20 years. But he is already talking about plans for the Adelanto GP in 2022, and this time he is aiming for January. 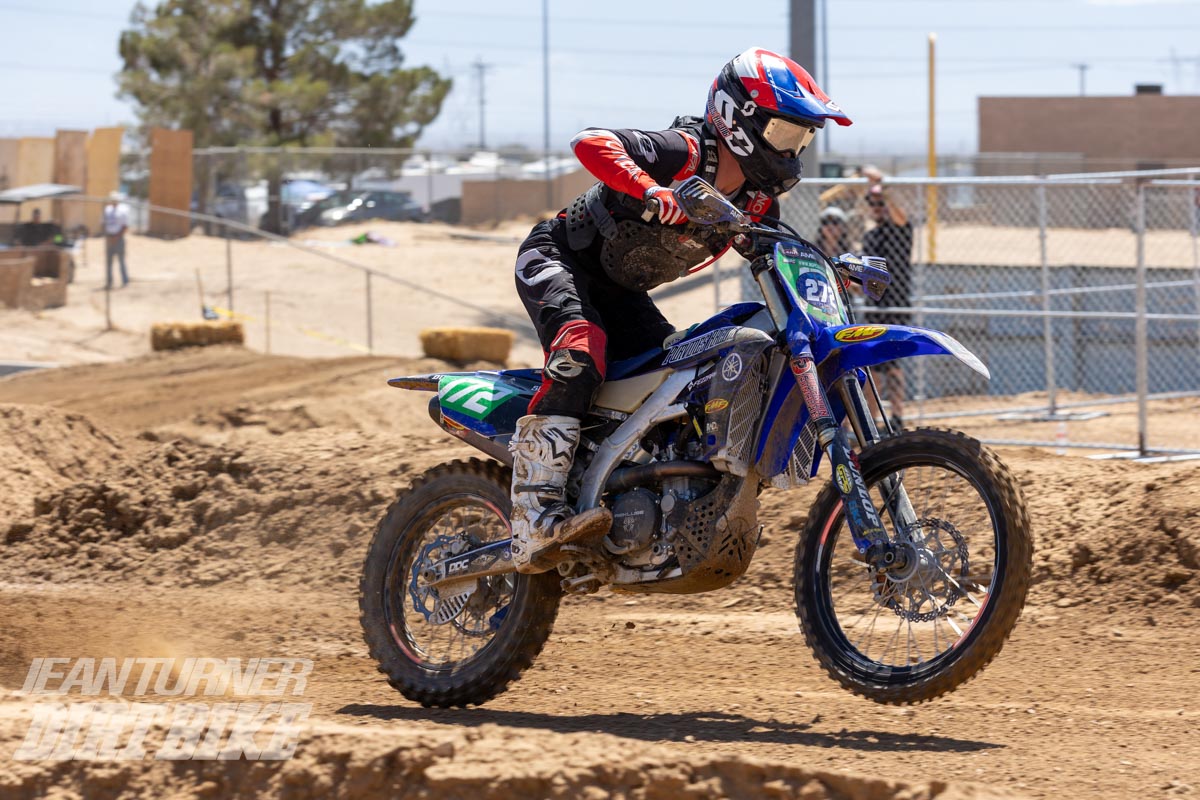 “The last race I put on was back when Montclair Yamaha was around and we did it right down the street at Racetown,” said Davis. “Something this big was a little bit more than I imagined with work and putting everything together. Being that it was a little bit less entries on Friday, it gave me a chance to make some mistakes and correct them [laughs]. If it was a big event the first time, first go around, I would have been in trouble here and there. But it turned out good. I think the course came out good.”

Davis enlisted the help of Marc Peters to build the track’s motocross sections, and the endurocross infield, which was entirely reconfigured on Saturday night to accommodate Sunday’s side x side racing. The crew also worked around the clock to keep water down, which, coupled with the cooperation of the weather, made for a fun course and very little dust. Being light on entries also resulted in the high-speed high-desert course being less beat up than usual, but the King of Adelanto, Trevor Stewart, had some critical thoughts on the low attendance.

“It’s kind of a bummer, honestly. I heard there was a lot of weird stuff going on, to kinda like boycott this race due to WORCS or Big 6, or complications. It’s honestly so lame, because this could have been an awesome event,” said Stewart. “We could have had a lot of people out here. People were told not to come. Super lame for our sport. I don’t condone that at all. We’re in a great spot with racing and for people to not come here, to make a statement or something, it’s pretty lame. This would have been an awesome race for people to come out and do. Maybe come make a little bit of money with your down time.

“I want to thank Ty [Davis] for putting on a cool race. He worked his butt off. I appreciate that. And hopefully next year there’s no weird stuff like that going on any everybody shows up and comes racing. More people show up, there’s more money in the pot, more eyes on our sport. Hopefully Ty puts on this event next year. I definitely want to thank him again for putting this on.”