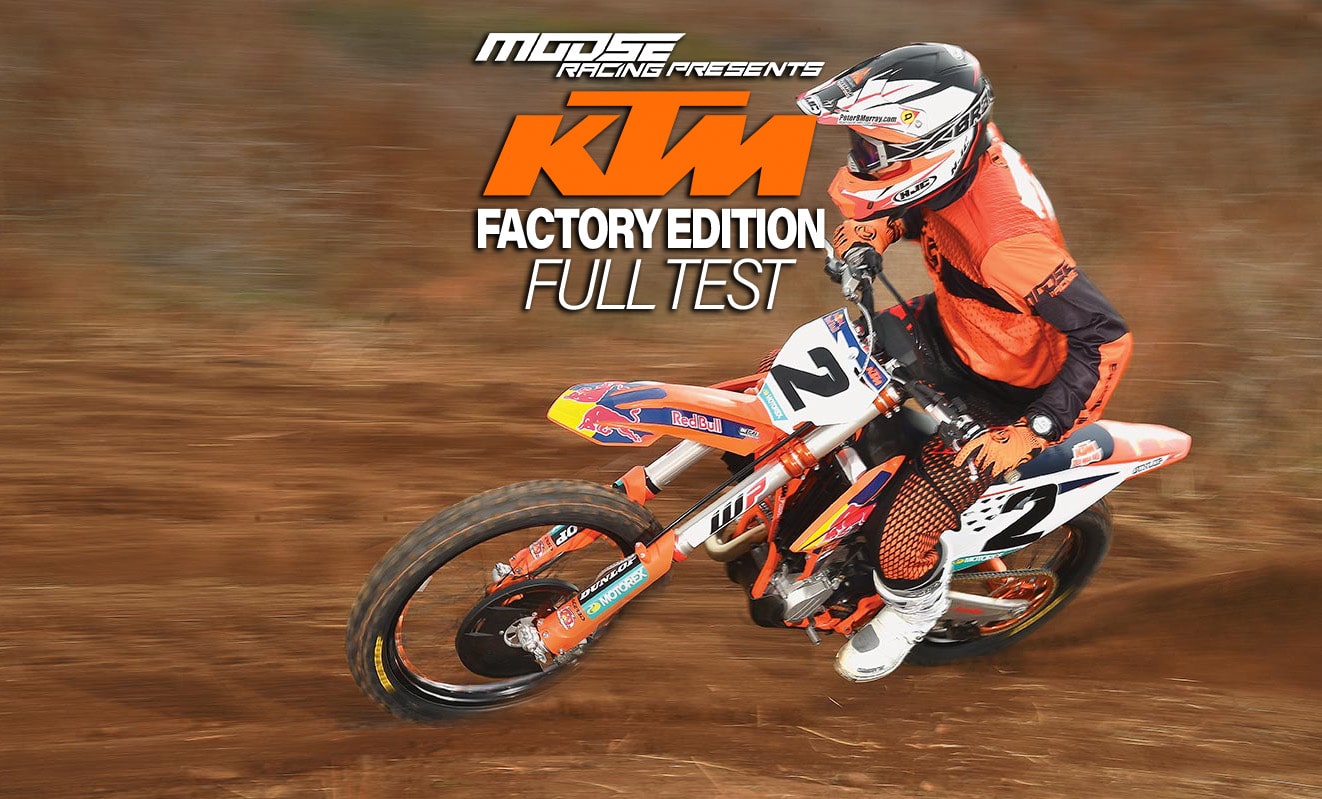 The annual release of the KTM Factory Edition is a red-letter day on the calendar of any orange-blooded motocross fan. Not only does it mean the new Supercross season is right around the corner, it’s generally the start of the new model season. KTM has a history of using the Factory Edition to preview whatever new tech is coming for next year’s bikes. This year, it might be a little different. The 2021 1/2 450SX-F Factory Edition is here without any significant frame or motor changes. What it does have is fully operational connectivity to KTM’s new smartphone tuning app. This is something that we’ve been hearing about since last summer. 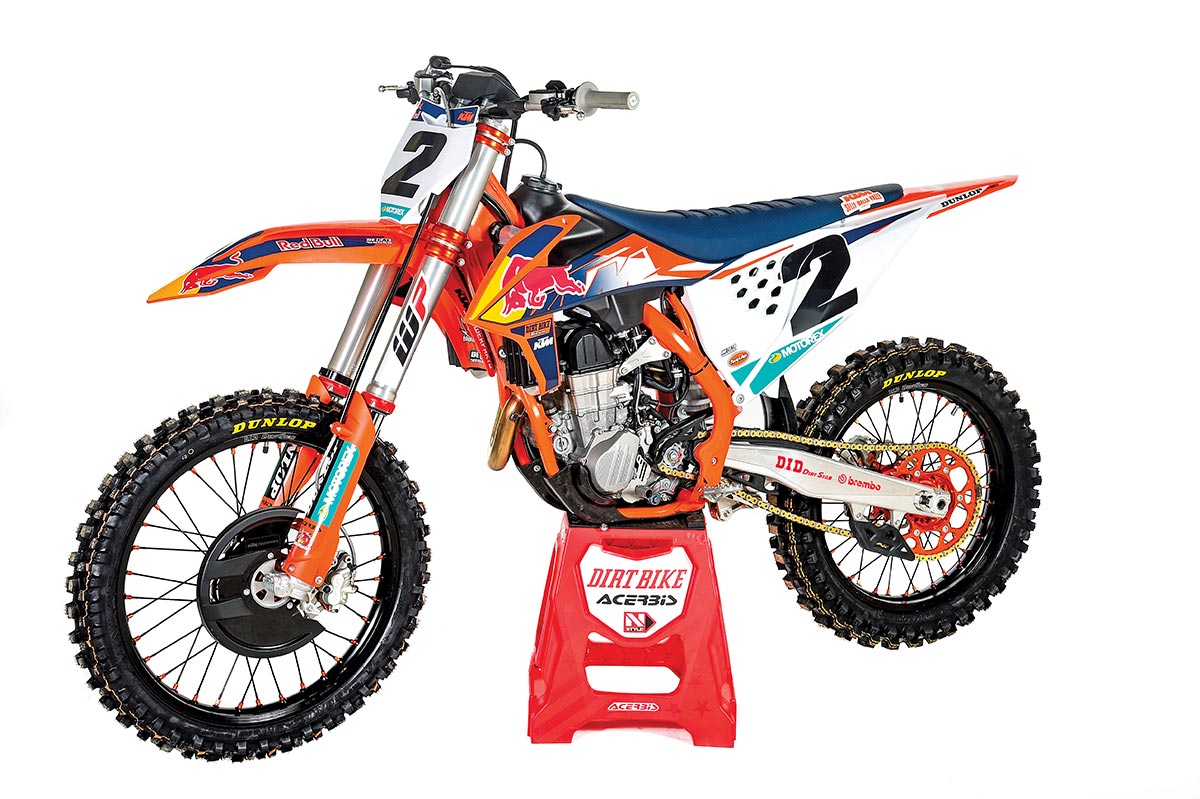 The orange frame is another Factory Edition perk.

THE FACTORY TREATMENT
The Factory Edition might have the same engine, frame and suspension as the standard 20021 450SX-F, but it’s loaded with bling. It starts with the orange frame, the Red Bull graphics and the Selle Dalla Valle seat cover, then goes on to a substantial list of hard parts that include:

In terms of performance, there’s very little difference between the Factory Edition and the standard one aside from a quieter exhaust note. It’s still very fast, very light and one of our favorite motocross bikes. The pipe and the bling make it worth more than the $1000 markup. The real bonus is the connectivity unit that sits where the crossbar pad should be. Initially, the My KTM app was designed to be compatible with all 2021 SX-F and XC-F models, but, as it turned out, obtaining the connectivity unit to retrofit those models is difficult. Now, it comes on the Factory Edition and that’s it.

MY KTM
The My KTM app opens up another dimension of tuneability. It’s designed to be very user-friendly, but it might require a little hit-and-miss experimentation the first time you use it. The app connects to your bike via Bluetooth and takes a little setup time. It might go smoothly; it might not. There are about a half-dozen things that can mess you up until you know the drill. To start, select your model of motorcycle. For some reason, the 2021 Factory Edition isn’t yet listed as an option. You have to choose the 2021 450SX, not the 2020 Factory Edition.

In your smartphone’s Bluetooth settings, when you tap “Pair New Device,” you should see “KTM Sportmotorcycle” listed. If not, there could be a number of things wrong. Try tapping the button on the bike’s crossbar pad three times. If that doesn’t work, try forgetting any earlier connections on your phone. This can be a little dicey with different types of phones. Once you’re connected to the bike, the fuel pump turns on briefly. That means you’re in.

Once you’re connected, scroll down and tap on “Engine.”  Then tap on “Create New Map.” Give your map a name. Tap on the “Advanced” tab, and then you can start to play around. For those who are used to other tuning apps, such as Yamaha’s, this is a very different experience. You don’t get to mess around with any of the mixture or advance numbers. Instead, you are given six fields: track type (sand, gravel or hardpack), track condition (wet or dry), engine braking (five levels), throttle response (five levels), traction control (five levels) and launch control. When you have a map built, you upload it, and if all is good, you get a screen that says, “Upload successful.”

Some of the settings offered make very little difference; others are obvious. In general, most riders like less engine braking. It doesn’t feel like the throttle response adjuster does very much, and oddly, the power for sand and hardpack are almost the same. Only the “wet gravel” combination seems to tone the bike down. Likewise, the different levels of traction control are very subtle. The app also gives you a tool to help with suspension settings. It doesn’t have to be connected for you to use this feature. You enter your weight, ability and track conditions, and it gives you recommended clicker settings.

The KTM app is fun to play with, but we wouldn’t call this a tool for serious tuners. You can see everything it has to offer in a morning of testing. If you expect to develop a secret map for racing at Mammoth or to work with engine modifications, this won’t be of much use. It’s too dumbed down for the weekend racer. Comparisons with the Yamaha Power Tuner are inevitable, but the Yamaha tuner is the exact opposite. It allows you to adjust so many different parameters that it’s easy to get lost. The average consumer stands virtually no chance of coming up with an effective map without hours and hours of work. The saving grace is that you don’t have to. Yamaha user groups share maps, and even Yamaha has them posted. Engine tuners have been known to charge for maps they have developed for specific fuels or modifications. That won’t happen with the KTM app. 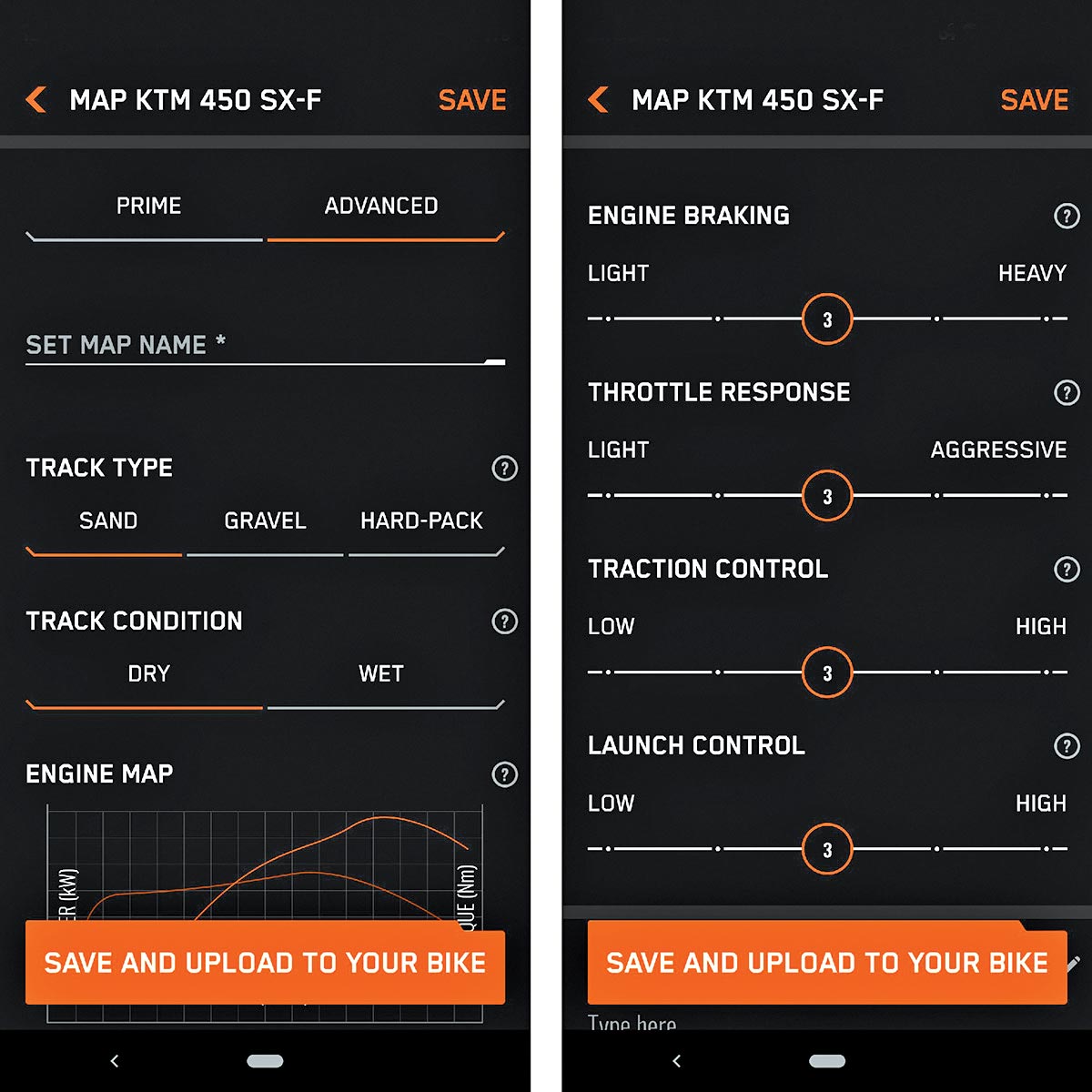 KTM hasn’t said if any more advanced settings are in the works, but the engineers almost certainly have something up their sleeves. We won’t be surprised if updates to the My KTM app come swiftly and frequently. This is just the beginning of what will no doubt become the universal method of bike tuning. That’s why this year’s Factory Edition might well offer more value than any of the ones before it. With those, you only got cosmetic upgrades and, depending on the year, advance delivery of some hard parts that would become standard items in the very near future. Now, the upgrades are likely to keep on coming, season after season. The day is coming when motorcycle updates will come like computer operating system updates.