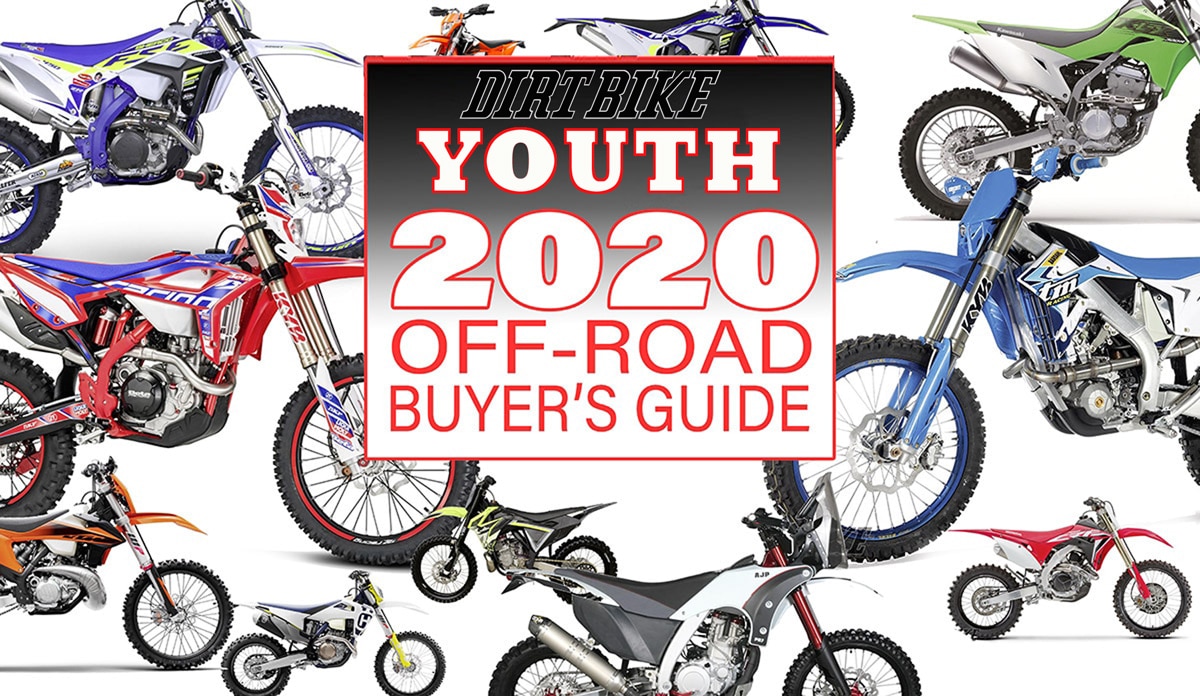 SSR SR189/SR150: $2689/$2299
SSR has a reputation for fair pricing, and the SR189 and 150 might be the most attractive bikes that the company offers. They both bridge the gap between minis and full-size off-road bikes but are loaded with features, including electric start and hydraulic disc brakes. The 189 has larger wheels (16/19 inches), more power and more suspension travel. The 150 has a 14/17-inch wheel combo.

KAWASAKI KLX140G: $3699
Kawasaki is exploring a new category with the KLX140G. This is a motorcycle with an 18-inch rear wheel and a 21-incher in front, just like a full-size off-road bike, but everything else is downsized. It has the same engine as the standard KLX140—an electric-start, air-cooled four-stroke with a 20mm carb and a manual clutch. It’s a little taller because of the wheels, making it a good bike for growing kids or small adults.

KAWASAKI KLX140L/KLX140: $3399/$3099
There are a total of three KLX140s, all with different wheel sizes. The standard version has a 14-inch wheel in the rear and a 17-inch wheel in the front, and the “L” has a 16/19-inch combo. All have a manual clutch, a five-speed gearbox and electric start. The most important difference between them is seat height. The saddle on the standard version is 30.7 inches tall, and the L’s is 31.5 inches.

HONDA CRF125F BW/CRF125F: $3499/$3099
This is a fairly new entry-level bike with a fuel-injected air-cooled motor, a manual clutch and a five-speed gearbox. It has electric start and a keyed ignition, so you can hide the key in the event of bad grades. The standard model has a 14-inch rear wheel and a 17-inch front wheel. The Big Wheel has a 16/19-inch combo with a seat height that is about an inch taller.

SUZUKI DR-Z125: $3299
Suzuki has let the DR-Z125 get fairly ripe. It has been in the line with very few changes for almost 20 years, but the price isn’t bad. It has a well-proven, air-cooled, five-speed motor with a manual clutch. It still doesn’t have electric start or fuel injection, but there’s something to be said for a bike that doesn’t need a battery to start.

YAMAHA TT-R125LE: $3349
Yamaha used to sell four versions of this bike, with and without electric start and in different wheel sizes. This is the one that survived. The LE has electric start and big wheels (16/19 inches). It still has a kickstarter for backup and an old-fashioned carburetor. The motor is air-cooled with a manual clutch and a five-speed gearbox.

HONDA CRF110F: $2399
Honda redesigned this bike with a new chassis and a fuel-injected motor last year. It still has an air-cooled motor with a four-speed gearbox, an automatic clutch and electric start. This is designed to be a starter for young kids around 8 years old and has an adjustable throttle stop so you can increase performance as the child advances.

KAWASAKI KLX110L/KLX110: $2499/$2299
The KLX110 has been a staple in Kawasaki’s line for years because it appeals to beginners and experienced riders alike who are into the pit-bike scene. The standard model is a true entry-level bike, with an automatic clutch and a seat height of 26.8 inches. The L model has more suspension travel, a taller seat height and a manual clutch. Both have 12/14-inch wheel sizes.

YAMAHA TT-R110: $2299
The TT-R110 goes back to 2008 when it replaced the TT-R90. It hasn’t seen much change since then and still has a four-speed gearbox with an automatic clutch and electric start with a kick-starter for backup. The Yamaha TT-R110E is a bit smaller than most of the other 110s, although the rear wheel is still 12 inches and the front is a 14, similar to most bikes in this class.

SUZUKI DR-Z50: $1749
Suzuki came late to the electric-start 50cc four-stroke party, but as a result, the DR-Z50 has more modern styling than its competitors. It has electric start with a manual backup, a three-speed gearbox and an automatic clutch. It has a 22-inch seat height with 10 inch wheels at both ends. The DR-Z 50 is made in-house by Suzuki.

YAMAHA TT-R50E: $1699
Yamaha was the first to realize that an entry-level minibike has a much greater need for electric start than an adult bike, and the TT-R50 was the first to have electric start back in 2006. Now a kid doesn’t need to wait for mom or dad to start the bike, which may be good or bad. The TT-R50E hasn’t changed since its introduction and still has a backup kickstarter, a three-speed and a carburetor.

YAMAHA PW50 TWO-STROKE: $1499
The PW50 gave generation after generation of Pro motocrossers their start. It has been in Yamaha’s line virtually unchanged since the ’80s. It’s still a fully automatic one-speed that can be equipped with aftermarket training wheels. It has oil injection and an old-school kickstarter, and the seat height is manageable for a 6-year-old.

68
YCF PIT BIKES: $1149–$3299
YCF is an importer with dealers primarily located in the east. The company imports about 20 different bikes, ranging from 50cc to 190cc. The most interesting is the Flat Track 190, which is loaded with features and comes ready to line up for flat-track racing.

THUMPSTAR PIT BIKES: $1223–$3436
Thumpstar is an Australian company that designs its own products and then has them manufactured in various countries. The pit bikes primarily come from Zongshen in Taiwan. They range from a 70cc automatic to the TSX-190 C with hydraulic disc brakes, competition suspension and a manual clutch.

PITSTER PRO: $799-$3299
Pitster Pro is a Utah company that imports a full line of off-road bikes. The company’s pit-bike offerings are particularly varied, with around 13 models ranging from an automatic 60 to the high-end FSE190R with its competition suspension and 190cc motor. The company also has expanded into full-size bikes, including the GPX FSE450R, which sells for under $6000.

HONDA CRF50F: $1549
This is the most flattered bike of all time, judging by the number of imitators on the market. The Honda 50 has been in Honda’s line of family-oriented starter bikes in one form or another for over 50 years, and it’s still offering many young riders their first exposure to life on wheels. It has 10-inch tires, an auto clutch and a three-speed gearbox. There’s a keyed ignition, but this is a kick-start-only bike.