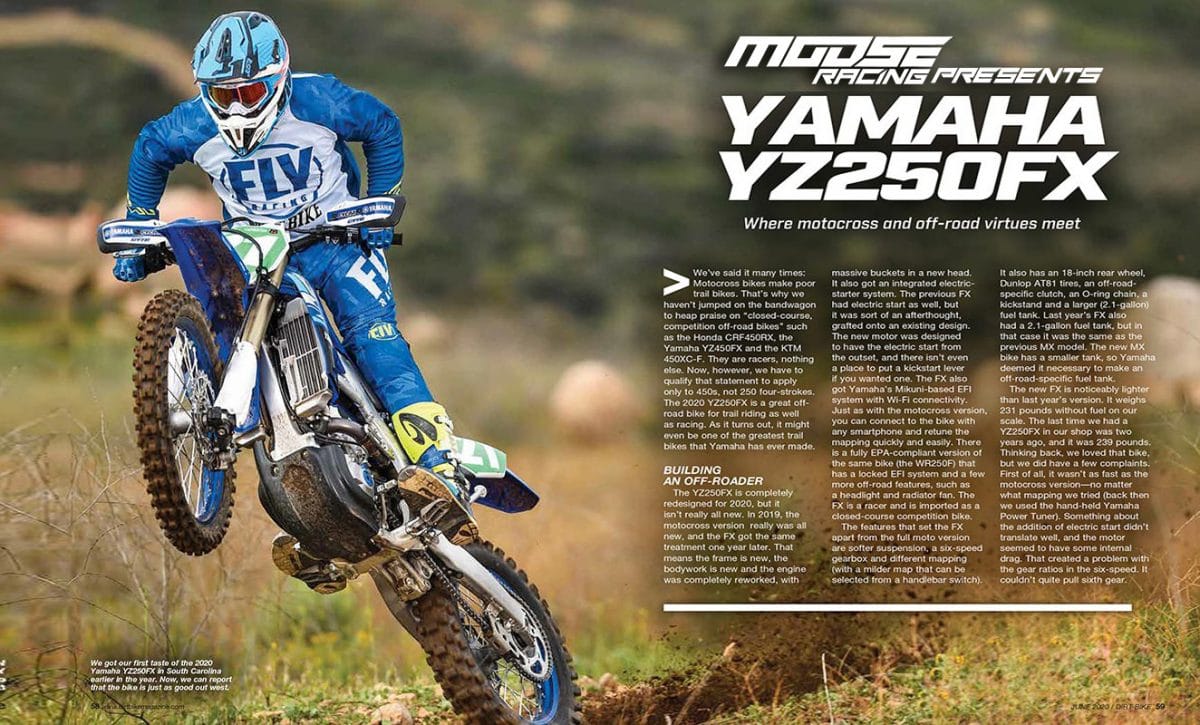 We’ve said it many times: Motocross bikes make poor trail bikes. That’s why we haven’t jumped on the bandwagon to heap praise on “closed-course, competition off-road bikes” such as the Honda CRF450RX, the Yamaha YZ450FX and the KTM 450XC-F. They are racers, nothing else. Now, however, we have to qualify that statement to apply only to 450s, not 250 four-strokes. The 2020 YZ250FX is a great off-road bike for trail riding as well as racing. As it turns out, it might even be one of the greatest trail bikes that Yamaha has ever made.

BUILDING  AN OFF-ROADER
The YZ250FX is completely redesigned for 2020, but it isn’t really all new. In 2019, the motocross version  really was all new, and the FX got the same treatment one year later. That means the frame is new, the bodywork is new and the engine was completely reworked, with massive buckets in a new head. It also got an integrated electric-starter system. The previous FX had electric start as well, but it was sort of an afterthought, grafted onto an existing design. The new motor was designed to have the electric start from the outset, and there isn’t even a place to put a kickstart lever if you wanted one. The FX also got Yamaha’s Mikuni-based EFI system with Wi-Fi connectivity. Just as with the motocross version, you can connect to the bike with any smartphone and retune the mapping quickly and easily. There is a fully EPA-compliant version of the same bike (the WR250F) that has a locked EFI system and a few more off-road features, such as a headlight and radiator fan. The FX is a racer and is imported as a closed-course competition bike. 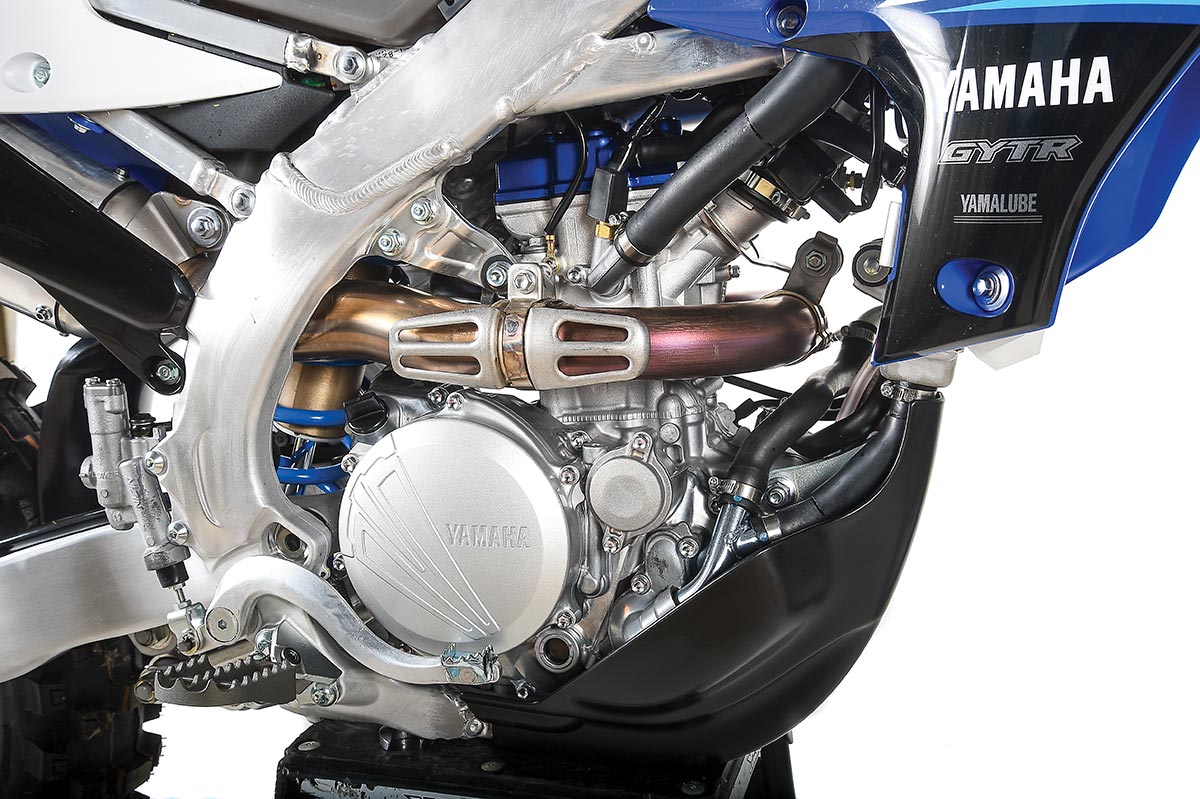 The features that set the FX apart from the full moto version are softer suspension, a six-speed gearbox and different mapping (with a milder map that can be selected from a handlebar switch). It also has an 18-inch rear wheel, Dunlop AT81 tires, an off-road-specific clutch, an O-ring chain, a kickstand and a larger (2.1-gallon) fuel tank. Last year’s FX also had a 2.1-gallon fuel tank, but in that case it was the same as the previous MX model. The new MX bike has a smaller tank, so Yamaha deemed it necessary to make an off-road-specific fuel tank.

The new FX is noticeably lighter than last year’s version. It weighs 231 pounds without fuel on our scale. The last time we had a YZ250FX in our shop was two years ago, and it was 239 pounds. Thinking back, we loved that bike, but we did have a few complaints. First of all, it wasn’t as fast as the motocross version—no matter what mapping we tried (back then we used the hand-held Yamaha Power Tuner). Something about the addition of electric start didn’t translate well, and the motor seemed to have some internal drag. That created a problem with the gear ratios in the six-speed. It couldn’t quite pull sixth gear.

In the suspension department, the new FX has the same stuff as the motocross bike, just a little softer. In front, it’s a closed-chamber KYB SSS fork with steel coil springs. In the rear, it’s a fully adjustable KYB shock.

WHY A 250F?
The 250 four-stroke has come a long, long way since Yamaha reinvented it back in 2001. Back then, the bikes were hard to start, easy to stall, slow revving and painful to ride off-road. The impressions of those early examples left a bad taste in riders’ mouths that still lingers today. Americans still default to larger bikes for off-road riding. The new YZ250FX, however, is nothing like the 250F of the bad old days. Setting aside the obvious points that the new bike is lighter, faster and has electric start, it’s just a sweet, well-behaved motorcycle. The powerband is super smooth and goes on forever. The usable power range is 10,000 rpm wide. You can drop down to idle speed, open the throttle and just let the bike do its thing. It won’t stall, won’t bog and will just keep going faster and faster until it reaches an insane redline. The bike has a no-shift-necessary range that’s wider than a modern 450’s, and much, much wider than any two-stroke’s.

That makes for a great off-road bike. At a casual pace, very little work is needed. Below 8000 rpm, the bike is sweet and mellow, but it isn’t in much of a hurry to go anywhere. Above that, it makes pretty serious horsepower; so, if you want to go fast, you gotta scream it. The 2020 version is much more powerful than the older version on top. We didn’t have a 2019 model for a back-to-back comparison, but we know how the motocross bike compared to its predecessor. It lost a little down low and gained a whole lot of peak power. The FX clearly has the same personality, even though it has off-road mapping that makes the power come on a little more gradually. We were worried that any decrease in low-end would be a handicap off-road, but it’s not. It has enough, and when you want to get up and go, it’s easy to summon more, either with a downshift or a little clutch work. The YZ250FX also has a great clutch. The pull is light, and it will take tons of abuse. We don’t know why Yamaha wouldn’t put it on the motocross bike as well. 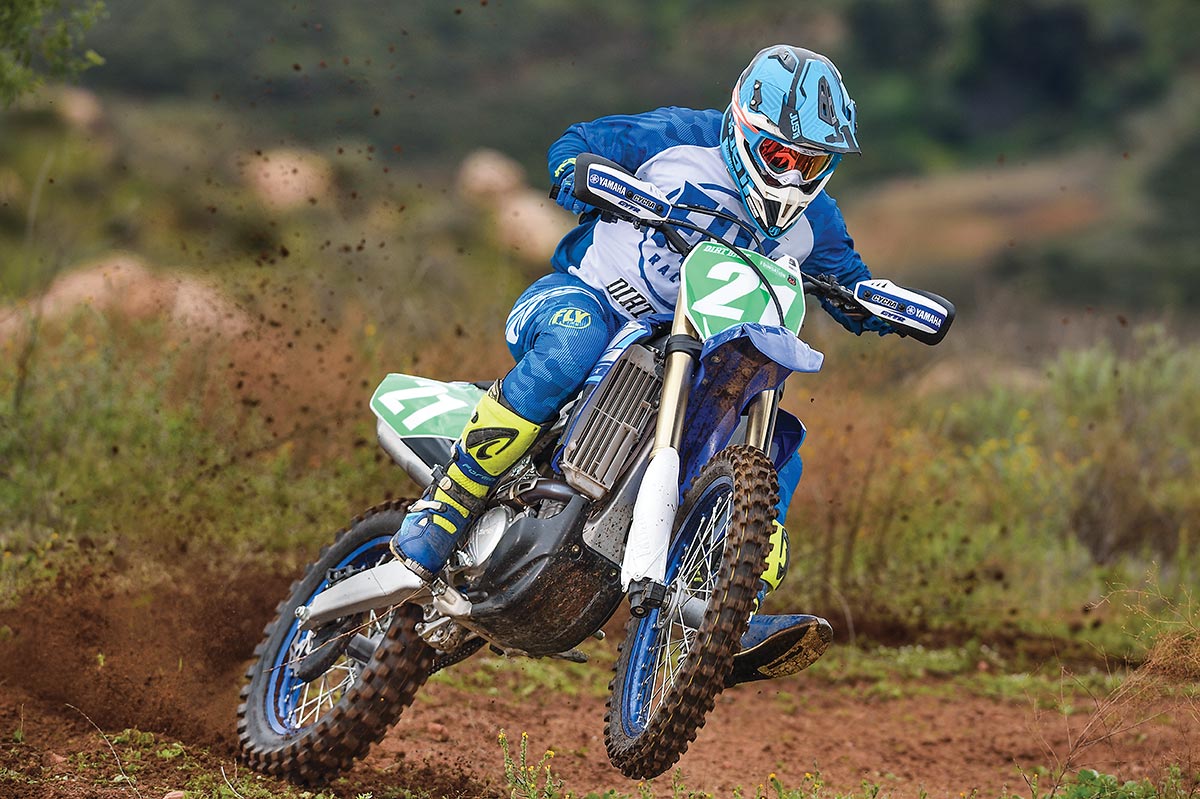 We tested the two maps that come preprogrammed within the Mikuni EFI system. The primary map was preferred by everyone. The secondary one seemed to take away top without giving anything in return. Its only benefit was that it would pop less on decel, although it still popped so much it was annoying. We haven’t yet tried to invent our own map to solve this, but it should be possible with the use of the Yamaha Power Tuner app. It’s very easy to use, and we’ve come to love it.

Just like last year’s YZ250FX, the 2020 model has great suspension. Yamaha knows better than to change it. In fact, it was probably Yamaha that single handedly brought the industry back to coil-spring forks after the great air-fork movement of the 2010s. With off-road suspension, setup is always a matter of guesswork for the factory. They don’t know who is riding the bike—or where, or how fast. The possibilities are endless. For our admitted bias towards fast singletrack, the FX is perfect. It’s compliant enough to deal with rocks and roots but still stiff enough for sportsman-level racing. It has enough adjustability to deal with riders from 150 pounds to 190 pounds. That’s one of the reasons we have historically loved Yamaha suspension; it just seems to work well no matter who you are. 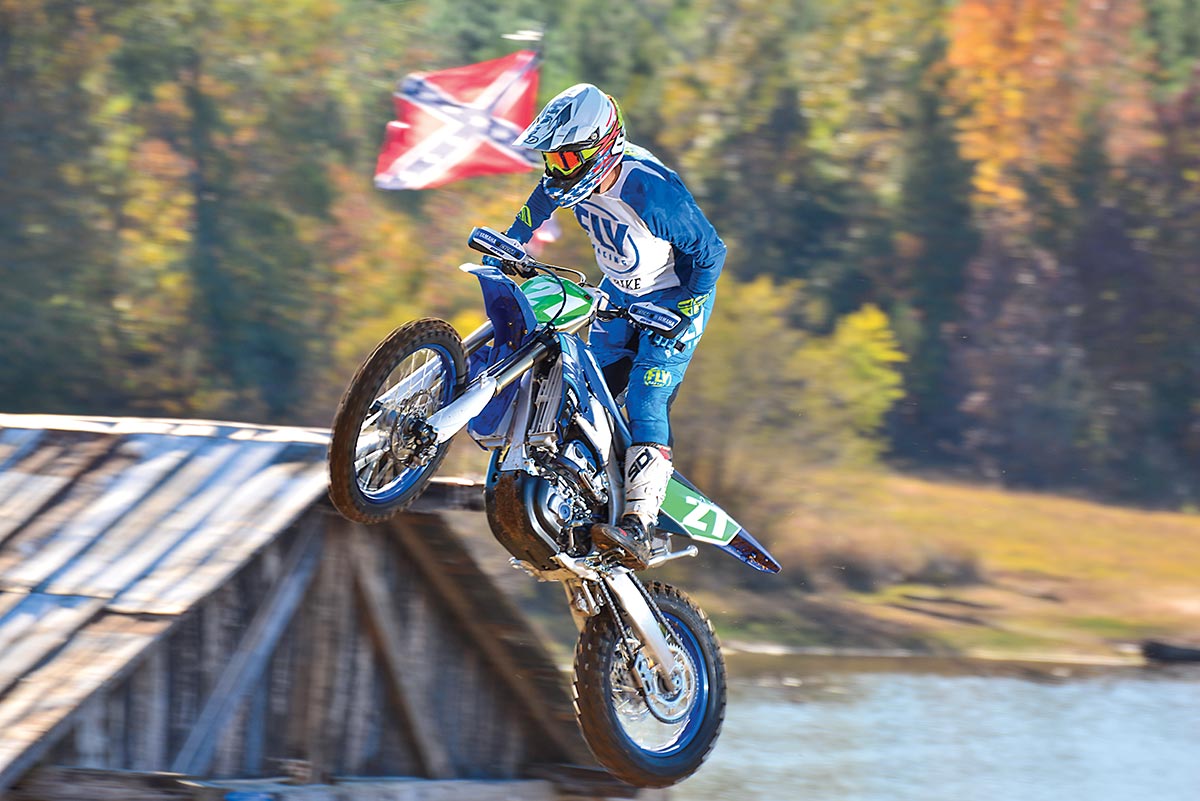 LIVING AND RIDING
Yamaha still thinks of this bike as a racer, which is why it doesn’t have a spark arrester, a radiator fan or instrumentation. As mentioned, the WR250F has all those things but not nearly as much performance. It’s much quieter and fully EPA compliant.  Choose wisely, Grasshopper. Neither bike has handguards. We installed GYTR guards by Cycra. Some riders might want more fuel capacity, which can be had with an IMS 2.8-gallon tank. We were able to get more than 50 miles out of the stocker on a ride that included lots of hill-climbing. We also recommend a taller seat. This bike still has oddball ergos with high bars and a low seat. It takes a big effort for tall riders to get far enough forward. This was corrected on the 2020 YZ450F but not on the 250.

Big kudos go to Yamaha for giving this bike a six-speed gearbox. First through fourth are about perfect for trail riding. You only go down to first occasionally on the average ride, but you’re happy it’s there when you need it. Fifth and sixth are a little tall. The 2020 model makes great top-end power, but it still can’t pull sixth unless you have flat, hard ground with lots and lots of space. Having it is still a benefit if you want to cruise on a dirt road without revving the motor.
Yamaha put a lot of effort into this bike, and it shows. It falls into a very select group of bikes that can do it all; it’s both a racer and a trail bike. It’s excellent in two worlds, and it doesn’t ask for compromise.