Settling into a new role 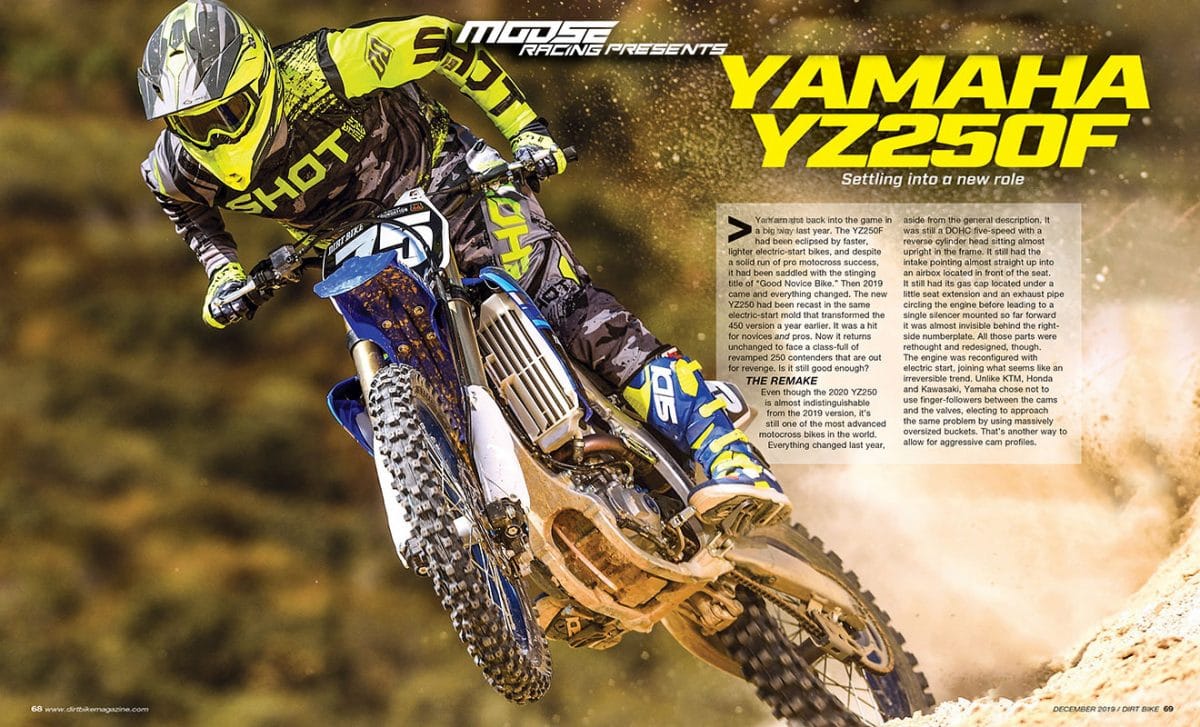 Yamaha got back into the game in a big way last year. The YZ250F had been eclipsed by faster, lighter electric-start bikes, and despite a solid run of pro motocross success, it had been saddled with the stinging title of “Good Novice Bike.” Then 2019 came and everything changed. The new YZ250 had been recast in the same electric-start mold that transformed the 450 version a year earlier. It was a hit for novices and pros. Now it returns unchanged to face a class-full of revamped 250 contenders that are out for revenge. Is it still good enough?

THE REMAKE
Even though the 2020 YZ250 is almost indistinguishable from the 2019 version, it’s still one of the most advanced motocross bikes in the world. Everything changed last year, aside from the general description. It was still a DOHC five-speed with a reverse cylinder head sitting almost upright in the frame. It still had the intake pointing almost straight up into an airbox located in front of the seat. It still had its gas cap located under a little seat extension and an exhaust pipe circling the engine before leading to a single silencer mounted so far forward it was almost invisible behind the right-side numberplate. All those parts were rethought and redesigned, though. The engine was reconfigured with electric start, joining what seems like an irreversible trend. Unlike KTM, Honda and Kawasaki, Yamaha chose not to use finger-followers between the cams and the valves, electing to approach the same problem by using massively oversized buckets. That’s another way to allow for aggressive cam profiles. 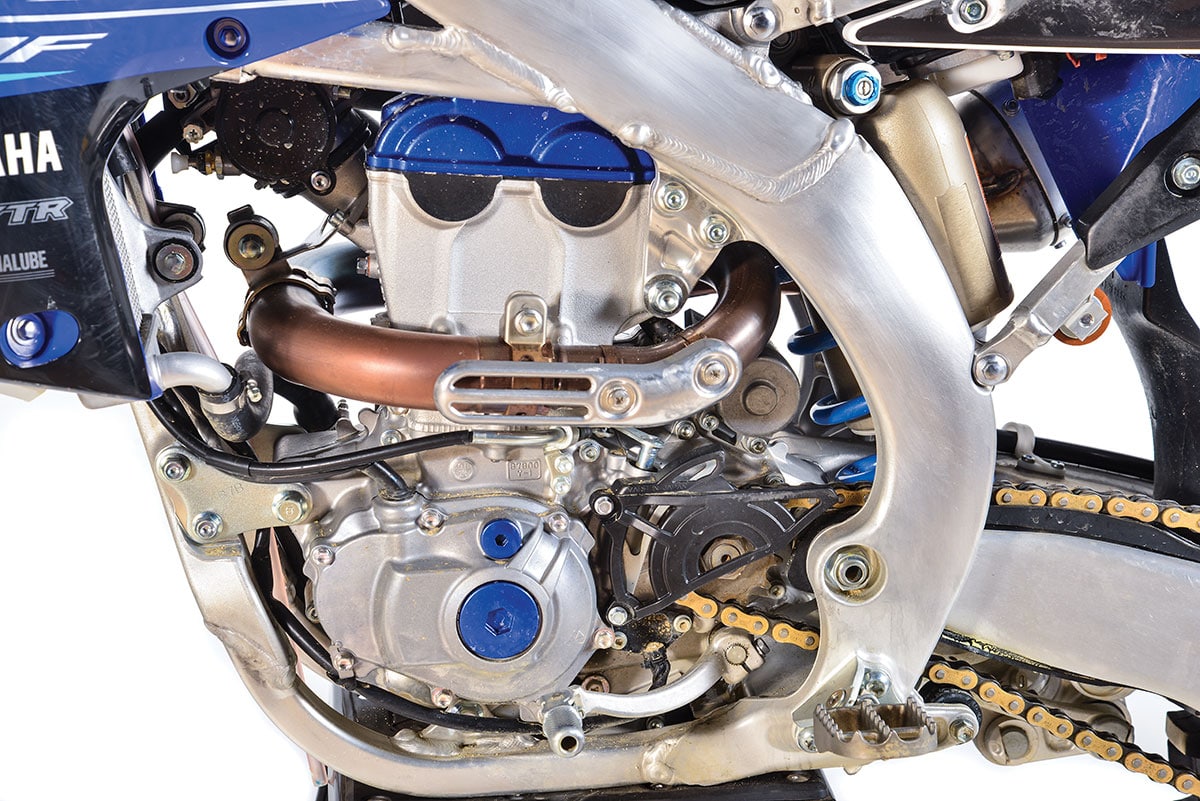 After getting a new electric-start motor last year, the YZ was once again competitive in the horsepower department.Yamaha broke away from the established play book by switching from Keihin to Mikuni for the fuel-injection system. The real innovation there was its Wi-Fi connectivity. You can use a smartphone to tune the EFI mapping through Yamaha’s free Power Tuner app. There’s a button on the handlebar that allows you to switch between any two maps for testing purposes, or even for changing track conditions. Yamaha doesn’t offer its Launch Assist on the 250.

The engineers stuck with KYB suspension, including the SSS coil-spring fork. It’s interesting that Yamaha never joined the air-fork party, instead waiting for the entire industry to come back to its way of thinking. The frame was still aluminum, but its members had less curvy lines for more rigidity. When Yamaha was through, the YZ was a much more modern machine, but it did gain weight. Without fuel, the 250F went from 222 pounds to 227 pounds. That’s not bad, considering the addition of a battery and electric starter, but the bike was still almost 10 pounds heavier than the KTM, which already had those things. For 2020, the YZ has no real changes aside from an air-filter grommet and some new graphics here and there.

WHY EVERYONE LOVES IT
The Yamaha YZ250F has no haters. It’s one of the few bikes that virtually everyone likes. The formula isn’t that complicated. If you combine a broad, usable powerband with great suspension, 90 percent of the work is done. In the 250 class, peak horsepower can carry disproportional weight, and that’s why the earlier Yamaha fell from grace. Now, it has enough peak power to hang with the top-end screamers of the class. It has a broad, flat power peak that just keeps revving and revving. On top, it tapers off gradually instead of hitting the rev limiter at full gallop. It still isn’t the most powerful bike in the 250 ranks, not by a long shot. Most of the other 2020 models still have a more top-end-weighted power delivery. But, the Yamaha is the torque king of the group, making it the easiest, most friendly bike to ride. If you had to muster criticism of the Yamaha’s motor, you could point out that it actually lost torque compared to the 2018 model, but it was a worthwhile trade, and the overall gain on top makes it a more well-balanced package.

You can always distract yourself by experimenting with different EFI maps. We have to confess that we used to hate map testing. It was a slow, tedious process, and riders simply gave up at closing time; hence, the 5 o’clock settings were usually declared the best. Now, the Power Tuner app actually makes it fun. You load one map in the standard position (with the handlebar light out) and the other in the optional position (light on). You can pick a favorite map quickly, then compare it to others, making your own March Madness bracket race. Contrary to what many people think, it’s not hard to cook up a map that delivers more peak power—if that’s your goal.  The original Travis Preston map that we published a year ago is still our favorite, and appears at the bottom of this post.. 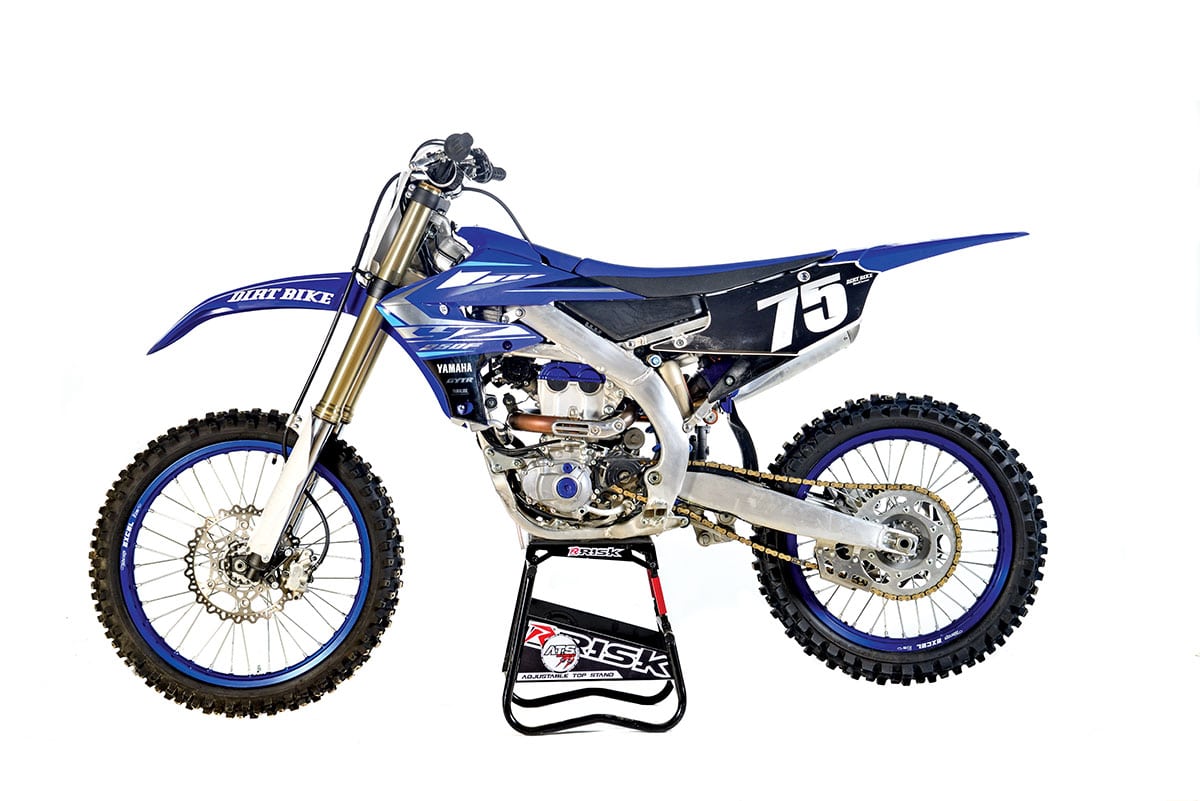 THE BUMPITY PARTS
Where the YZ continues to really shine is in the suspension department. The fork and shock are well-balanced and provide the best ride in the business. The mark of a well-designed package is when riders of a broad cross-section all agree that it works without fuss. The Yamaha has always been set up for riders who are a little heavier than the average 250 guy. It seems to be perfect for an intermediate rider in the 180-pound range. If you’re a more typical 250 rider of 150 pounds or less, you will have to take out compression damping. If you weigh much less, you’ll probably run out of preload adjustment, which will mean you need lighter springs. Even if you run it stock, you’ll still have a ride that’s better than most of the reworked and re-valved bikes on the track. The YZ is a cushy, good-handling bike.
As we pointed out, the new YZ isn’t especially light, but you only notice if you ride it back to back with an older YZ or a newer KTM. That doesn’t affect the bike’s handling or performance in any realistic way, but it is noticeable. The bike’s odd rider position is more of a negative factor. It has tall bars and a low seat, meaning you fit best if you have a 28-inch inseam and the arms of an orangutan. On the 2020 YZ450F, this is less noticeable, because the bars were repositioned and the seat foam was made stiffer.

THE 250 LANDSCAPE
Everyone is gunning for the Yamaha YZ250F this year. Honda found more torque. Kawasaki got more peak power. KTM and Husqvarna reworked their suspension. Even though the YZ was a unanimous favorite among test riders last year, it wasn’t safe enough to go unchanged. It will go into the 2020 250MX shootout as the favorite, but it’s not clear how it will come out. 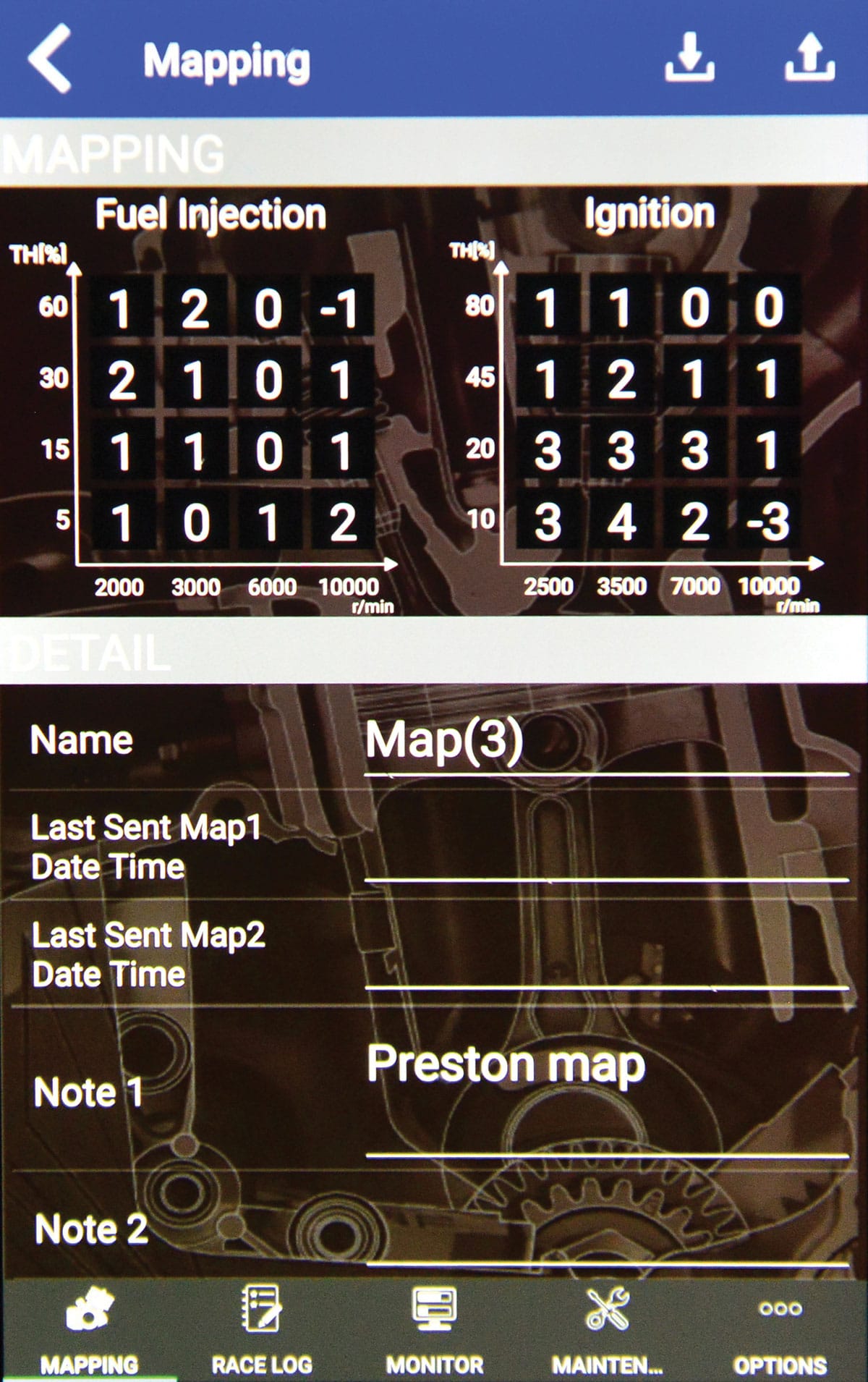