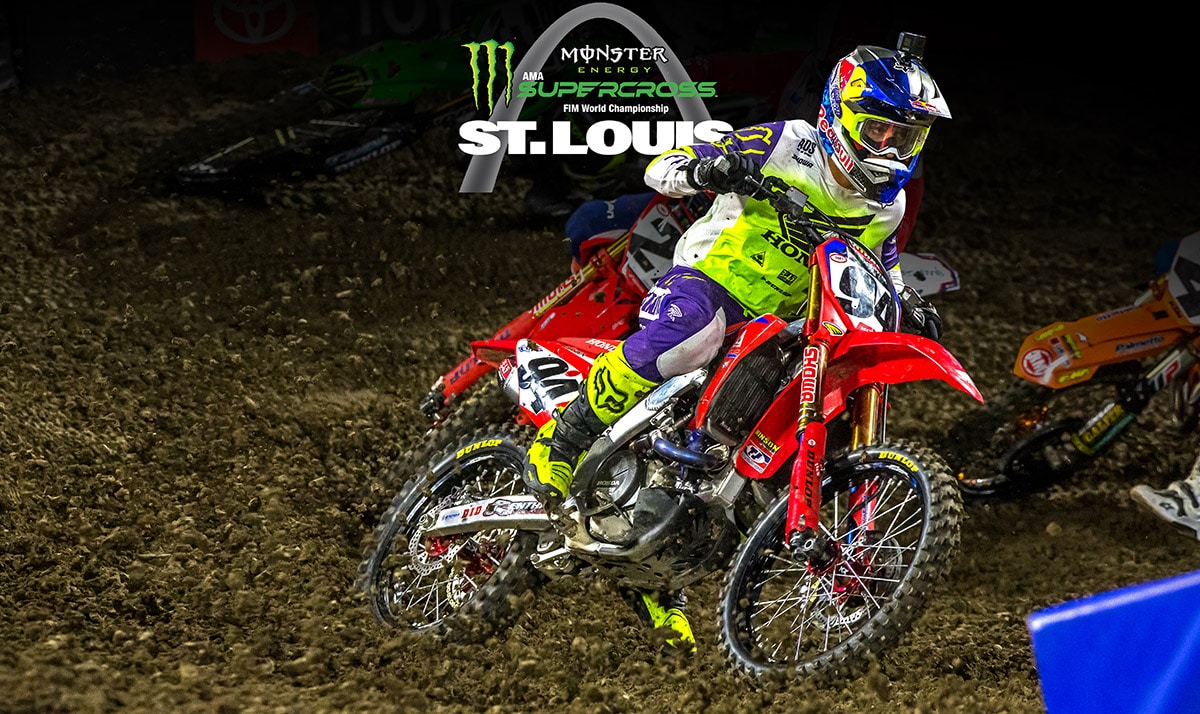 Ken Roczen shook off what ever issues he had at A1 and returned to form for the second round of the 2020 Monster Energy Supercross season at The Dome in St. Louis. He won his heat and dominated the main event, leaving the rest of the field struggling to keep up. But it was Justin Barcia who might be the happiest man of all leaving St. Louis. He backed up his Anaheim win with a solid second place, keeping the red plate and proving that he’s for real. As for Adam Cianciarulo, Eli Tomac, Jason Anderson and Zach Osborne, they all had something to show for their efforts. It just wasn’t enough. For extended coverage of the 2020 St. Louis Supercross, click here.

Ken Roczen got the start, but Vince Friese got under him in the first turn. It took a lap, but Roczen retook the lead. Cooper Webb and Eli Tomac weren’t far back, but it was Malcolm Stewart who was making the best moves early in the race. He passed Tomac, Webb and Friese in one lap, but by then, Roczen had a decent lead. As time began to get short, Tomac moved into third and then repassed Mookie for second. Webb  had his hands full holding off Blake Baggett with Friese falling back to seventh, while Dean Wilson, Chris Blose and Chad Reed were fighting over the final transfer spot. Roczen won with a 6-second lead over Tomac, while Chad Reed had to go to the LCQ.

The holeshot went to Zach Osborne, but it was Justin Bogle who took over quickly. Adam Cianciarulo was third at the end of the first lap while Justin Barcia was back in 10th  behind his teammate Aaron Plessinger. At first it seemed like neither Osborne nor Cianciarulo could do anything with Bogle, but then Bogle went down on lap three. That put Osborne in front with Cianciarulo, Martin Davalos and Jason Anderson following. Barcia was soon up to seventh, working on Justin Hill. Cianciarulo took the lead around the halfway point. In the final laps, Justin Brayton rolled to a stop and had to  walk back to the pits. With two laps to go, Barcia moved up to third after Anderson blew a turn.  Likewise, Davalos moved up but Anderson held on to  fourth. Cianciarulo won, looking much smoother in the late laps and Justin Bogle moved up into the final transfer spot on the last lap.

The drama in the last Chance Qualifier happened before the gate fell. Justin Brayton just barely got his bike to the line after a 15-minute motor swap. Chad Reed then pulled the holehot with Brayton in third. Within three laps Brayton took over the lead while Kyle Cunningham worked up to fourth behind Dustin Winter. Alex Ray was then nipping at Cunningham’s heals. In the closing laps, both Cunningham and Ray passed Winter, then Cunningham kept on going and passed Reed. Winter was the first man left out.

Zach Osborne and Jason Anderson were out front early, but Ken Roczen wasn’t far behind. He passed both of them quickly, and Justin Barcia followed the Honda rider through.  Cianciarulo was in the mix until a bobble cost him several places. In the early laps, both Roczen and Barcia squirted away, leaving a constantly changing parade consisting of Osborne, Anderson, Malcolm Stewart, Cianciarulo and Eli Tomac. Eventually, the order settled down with Cianciarulo passing Osborne, but unable to close on Anderson. The three top places eventually were set with Roczen’s lead slowly stretching out. Barcia and Anderson were clicking off the laps in second and third, but it was wheel to wheel between Cianciarulo, Osborne and Tomac for the rest of the race. On the final lap, Ciancirulo went down and Tomac passed Osborne.