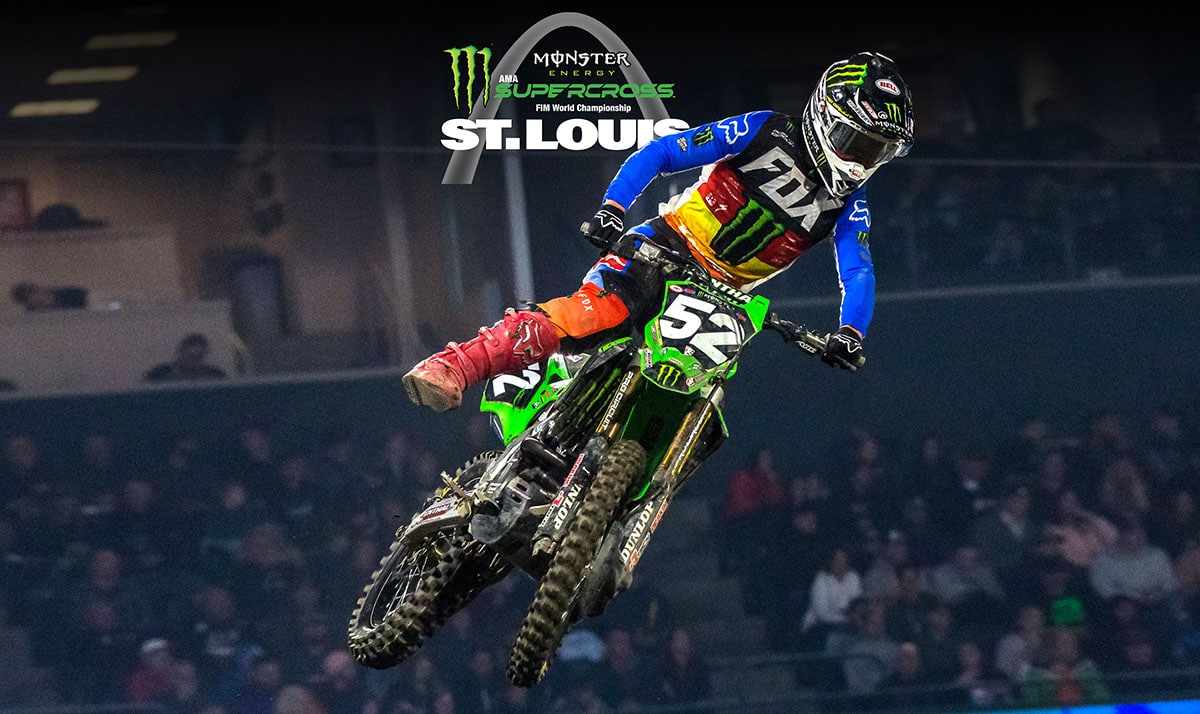 St. Louis picked up where Anaheim 1 left off in the 250 class of the Monster Energy Supercross season. Austin Forkner squared off with Justin Cooper once again up front, but this time, it wasn’t to be a bar-to bar race. Forkner was up front the whole way, playing a game of catch-me-if-you-can. The heartbreak of the night was Dylan Ferrandis who saw his whole race unravel just seconds after the start of the main. For extended coverage of the 2020 St. Louis Supercross, click here.

Jett Lawrence and Austin Forkner went through the first turn side by side, with Forkner eventually getting an edge. Meanwhile, Alex Martin hit Dylan Ferrandis causing a chain reaction with Ferrandis and Michael Mosiman going down. By the time Ferrandis remounted, a full lap had passed. Justin Cooper was then the top Yamaha rider in fifth. Up front, Lawrence paced Forkner and the two of them began to gap Cristian Craig. Within a few laps, Cooper passed Craig and slowly started to reel in the leaders. After the halfway point, things went bad for the Geico Honda team, with Craig going down and Lawrence almost going down. Justin Cooper moved up to second and Brandon Hartranft into third.  Austin Forkner ran a nearly perfect race up front to eventually finish with a safe lead. Cooper’s second place mean that he will keep the red plate going into Anaheim Two.

Red Bull TLD KTM rider Derek Drake got the jump that dreams are made of, but then spun a doughnut in the first turn and took out a couple of other riders. That left Michael Mosiman in front with Christian Craig hot on his heals. Craig moved into the lead on the second lap. Behind the leading duo, Luke Clout and Michael Leib were next with Cooper back in the pack. The red plate holder picked off one rider at a time until he finally passed Clout for third on the final lap. Derek Kelley was the final qualifier in ninth place.

Austin Forkner came out swinging by pulling the holeshot, but then lost it to Michell Oldenburg on the first lap. Austin made several frantic repass attempts and finally made it stick on lap two. Meanwhile, Dylan Ferrandis was dealing with a poor start. Soon enough, Ferrandis was in seventh following Jett Lawrence. He got by just before Lawrence and  Taiki Koga collided. Both went down hard, but Lawrence remounted quickly.  As the race came to a close, Forkner pulled away  from Oldenburg, who was dealing with Alex Martin. Jacob Hayes was fourth and had his hands full with Ferrandis. With two lap to go, Ferrandis moved into fourth, but there was a lot of ground between him and Martin, and he came up short of the podium.