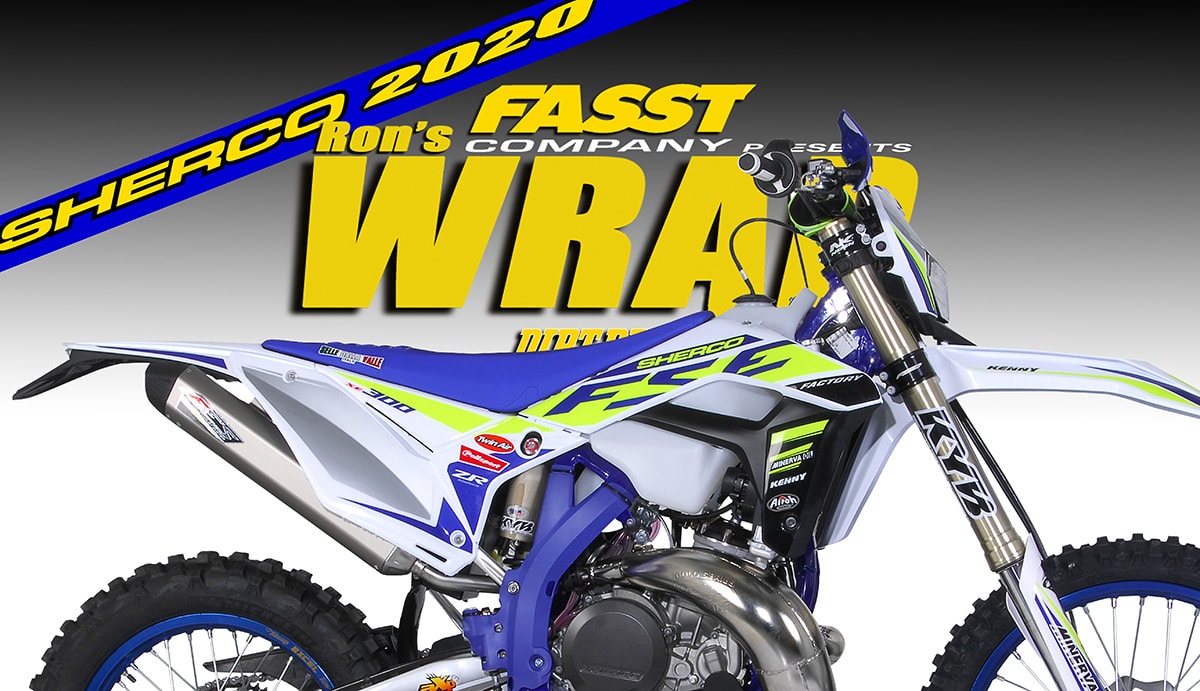 The 2020 Sherco off-road bikes and trials bikes were revealed this week in Italy. I was there and got the opportunity to ride every bike in the line. That was a lot of riding. The Sherco line-up is big. The enduro line includes 125 two-strokes, 250 two-strokes, 300 two-strokes, 250 four-strokes, 300 four-strokes and 450 four-strokes. Each of those will be offered in three different configurations. The “Racing” line is set up for eastern-style riding and the bikes have WP suspension, headlights, taillights and instrumentation. The “Factory” line has KYB suspension and upgrades, including a Akrapovic exhaust on the four-stroke models. The “Cross County” line is specifically aimed at western style riding in the U.S., and has stiffer KYB components and no lighting.

The big news for the U.S. is that Sherco Off-road models will have a different importer for 2020. Ryan Young Products will now be handling that. Ryan has been handling Sherco trials bikes for almost 20 years, and is now taking on the entire line. This deal is only three weeks old, so pricing for the new bikes has yet to be announced, but according to Kevin Field at RYP, most of the transfer has already taken place. Many of the same dealers will be in place and the U.S. parts warehouse has been moved to Louisville, Kentucky. Some of the trials dealers might also take on the off-road bikes, but many of those issues will be resolved in upcoming weeks. For now, there still are no dealers in California, but there are plans to change that. Ryan Young Products can be reached on its website or through 1-800-607-8742. Here’s a quick overview of the off-road bikes from a day of riding in Italy.

The 125 was a new model that was built from the ground up last year. It’s an electric-start two-stroke with a six-speed gearbox. The motor has a Keihin carburetor, just like all the other Sherco two-strokes. Right now, the company sees no advantage in moving to fuel-injection. They were, if you remember, one of the first companies to work on that, and they still don’t see any benefit beyond emissions. Riding the 125 is a blast. It’s fast! The bike is easily in the same league as a YZ125 motocross bike. For 2020, the 125 motor has a new piston and an adjustable powervalve. The powervalve is electronic and a new system allows a mechanic to adjust how far the valve will open. On the SE version, the WP fork now has adjustable preload, among other changes. There are quite a few reliability oriented changes including a better seal on the rear linkage. The KYB fork and shock on the Factory and Cross-Country models is more competition ready. 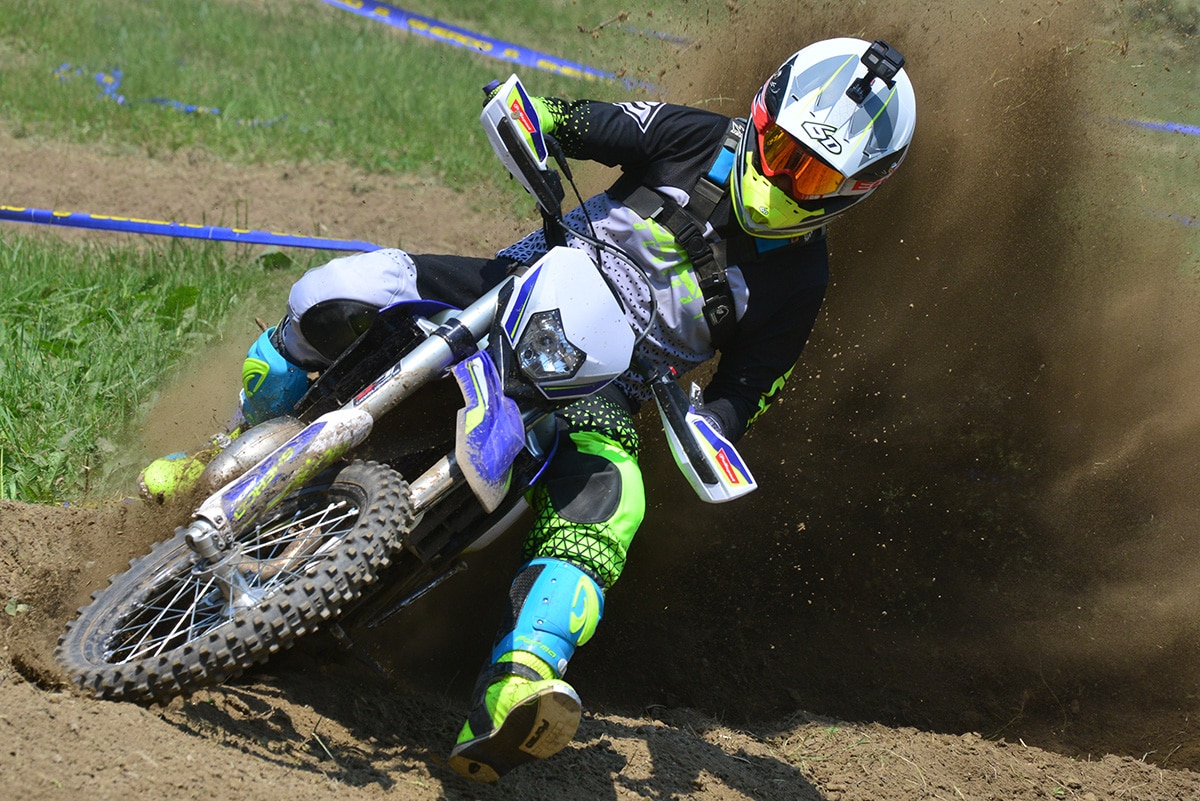 The Sherco SE125 is competitive with 125 motocross bikes. Photo by Kit Palmer.

The 250 and 300 two-strokes are almost identical, aside from bore size. They still have an electronic powervalve and a six-speed gearbox. Most of the changes are hard to see from the outside. The most important ones deal with the intake, starting with a reshaped air boot. A reconfigured intake manifold is shorter and the reed cage itself is redesigned. The clutch also was the focus of a number of changes aimed at a lighter pull. When you ride the bike, it’s clear that those efforts paid off. The 300, in particular, had a reputation as a hard bike to manage in some situations because it was powerful and hit very hard. Now, the transition into the meat of the power is smoother. Sherco still employs a map switch that’s every effective at mellowing out the powerband. The 300 is still more of an expert-oriented bike, whereas the 250 is much more controllable and easy to ride. Of the three models (Racing, Factory and Cross Country) the sweetest suspension settings were on the Factory versions with KYB components. The Cross Country models were a little too stiff for the tight trails in Italy. 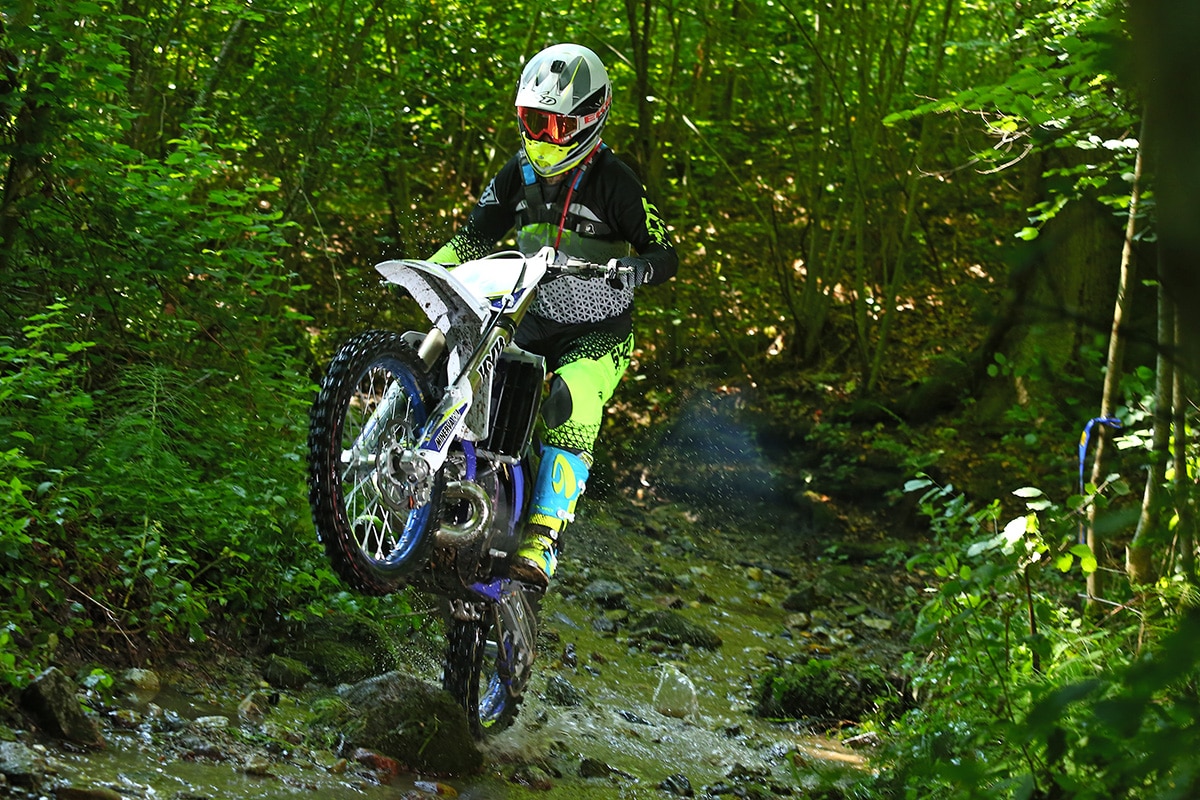 The Sherco 250 and 300 four-strokes are unlike anything offered in the U.S. The 300, in particular, fills a gap for riders who don’t want to deal with the anger of a full-size off-road bike. Even the 350s offered by KTM and Husky are becoming more and more 450-like with each year. The 300 is still easy to ride and forgiving, but goes much faster than any of the 250 four-stroke off-road bikes available. It, too, has a map switch that alters the power output dramatically, allowing a switch from race bike to trail puppy on the fly. The 250 is a trail racer like a KTM 250XCF in aggressive mode, but becomes something more akin to a Yamaha WR250 when you flip the switch. The most significant changes for the 250 and 300 four-strokes include updates in the starter system for less spinning weight.

The big bikes in the Sherco line are the basis for the TVS Sherco team’s rally effort. At the Dakar Rally this year, Michael Metge won a stage, which is unheard-of for a such a small team with a fraction of the budget of KTM, Husky or Honda. The 450 probably got the most mechanical changes of all the 2020 models. The cam chain, crankshaft, primary drive and a long list of other pieces were lightened to reduce spinning inertia.  It resulted in a dramatic improvement.  When I rode the newly presented 2019 models one year ago in France, the 450 was a beast that was too intimidating for narrow trails. I didn’t feel that way at all this year.  It’s fascinating how reductions in rotating mass can make such a huge difference in manageability.

These are just my initial impressions after one day of riding. A more detailed account as well as a full list of the actual mechanical updates for 2020 will be in the print edition of DB.