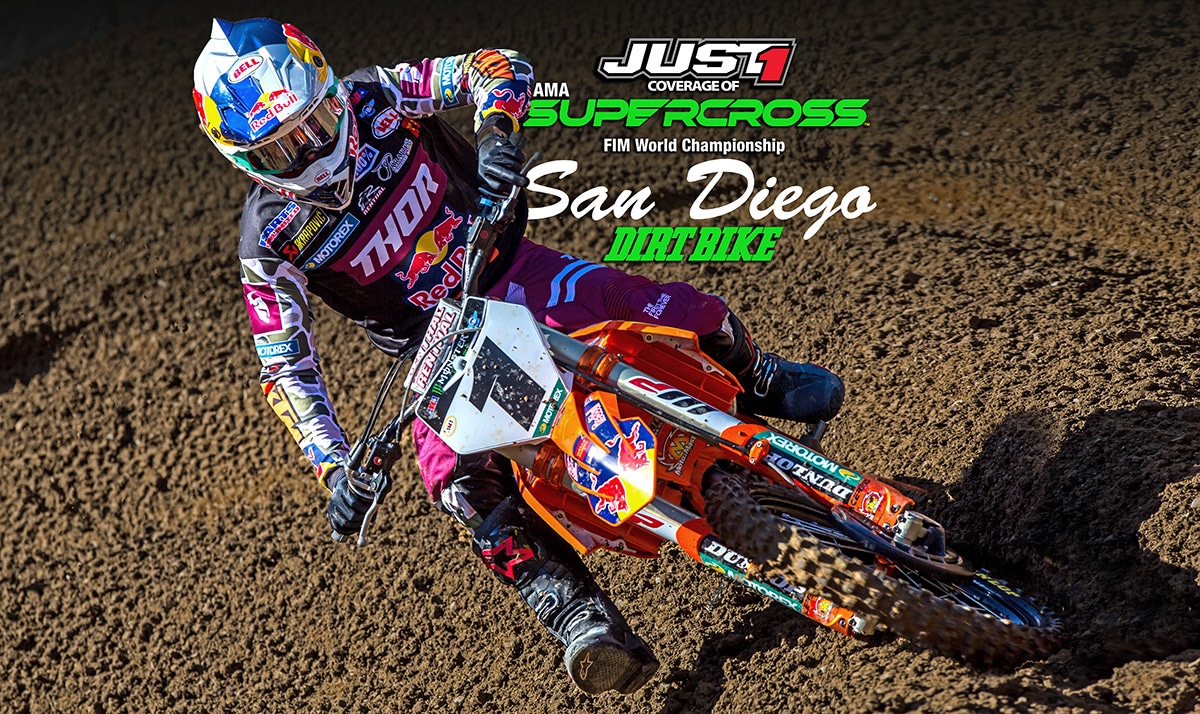 Cooper Webb finally put it together for round six of the 2020 Monster Energy Supercross season in San Diego. The points battle between Ken Roczen and Eli Tomac was upstaged by a one-on-one battle between Webb and Adam Cianciarulo up front, both of whom were out to score their first win of the season. In the end, Webb’s win moved him into third in the points although Roczen still keeps a narrow point lead.

Adam Cianciarulo pulled the holeshot with Blake Baggett close behind. Justin Brayton and Baggett started getting into it on the first lap while Jason Anderson and Dean Wilson battled for fourth. Justin Barcia eventually came up and started getting in to the mix, as Wilson dropped back. On the final lap Anderson and Baggett were making contact in several turns, and Anderson’s bike sustained some sort of wheel damage. He dropped back to fifth, just hanging on ahead of Malcolm Stewart. At the flag, it was Adam  Cianciarulo, Justin Brayton, Blake Baggett, Justin Barcia, Anderson, Malcolm Stewart, Dean Wilson, Tyler Bowers and Ryan Breece.

Cooper Webb’s sixth-place showing in the heat would normally have relegated him to a poor gate pick, but because of the oversight of other riders, a good inside gate was left open. He claimed it and used it to pull a holeshot. Adam Ciancairulo was right there, though, and made a pass for the lead early in the race. Blake Baggett was a solid third place, but Ken Roczen and Eli Tomac were outside the top 10. As the race opened up, Cianciarulo, Webb and Baggett were able to get a small gap on the field, while Roczen and Tomac  picked off one rider at a time. By the time they came upon Malcolm Stewart in sixth, it would no longer be easy. Roczen was momentarily held up by Stewart and Tomac got around both of them. Then Tomac had to work on Justin Barcia while Rozen worked on Stewart.  The battle for the lead heated up in the final few laps. Webb was able to make up considerable time on Cianciarulo in the second set of whoops, and he eventually used that to set up a pass for the lead.  He would go on to win the race with Cianciarulo second, Baggett third and Tomac fourth.  Roczen has passed Stewart, but was never able to pass Barcia for fifth, and was visibly upset about it.