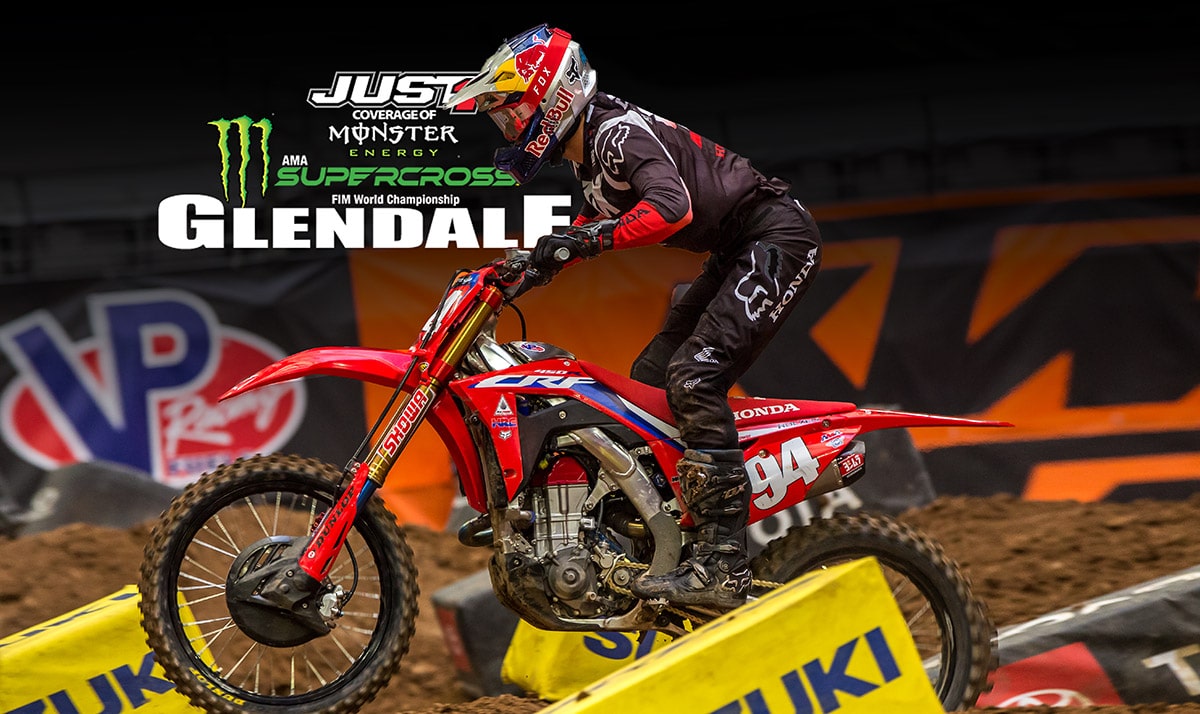 As Monster Energy Supercross moved into Glendale, Arizona for round four, Ken Roczen demonstrated that he’s holding the Red Plate of the points leader for a reason. This was the first Triple Crown Format of the year, and he would score a 1-1-1 for an impressive overall win. Eli Tomac and Adam Cianciarulo had speed, but couldn’t keep Roczen from extending his points lead.  For extended coverage of the 2020 Glendale Supercross, click here.

Zach Osborne was the early leader in the first main, with Ken Roczen, Eli Tomac and Malcolm Stewart all close behind. On the second lap, Osborne went down, handing the lead to Roczen, but Tomac was hot on his heals. Cianciarulo came up to pass Stewart for third and then Anderson also started closing in. Cooper Webb was buried deep in the pack, but by the halfway point he climbed up into the top 10 by passing Vince Friese. In the meantime, Tomac closed on Roczen and the two of them raced bar to bar for the next six laps. Tomac was faster on some sections, but Roczen would pull away on others. In the end, Roczen held on to the lead and actually pulled slightly away, taking the first Main of the evening.

The second Main started with a rough first turn as Zach Osborne and Justin Bogle went down.  Cianciarulo, Tomac and Roczen bashed together with Tomac coming out on top, but there was a red flag. The riders returned to the gate while the medical crew tended to Bogle. He suffered minor injuries but was unable to return to the gate. Roczen got the next holeshot while Tomac was fifth behind Cianciarulo, Aaron Plessinger and Webb. Both Cianciarulo and Tomac displaced Plessinger, who then had to worry about Jason Anderson. Roczen quickly developed a small gap while Webb had his hands full staying in front of the two Kawasaki riders. Cianciarulo made a clean pass for second on the third lap, but went down shortly afterward. In the carnage, Tomac managed to pass Webb. At that point, Roczen had a 6-second lead. Through the middle laps, Tomac was unable to close in on Roczen, but Anderson did pass Webb. Blake Baggett also passed Webb, setting up the final order: Roczen, Tomac, Anderson, Baggett, Webb and Cianciarulo.

Roczen was deep in the pack for the main three start while Martin Davalos and Jason Anderson were close behind. The race was two full laps old when the red flag came out once again, this time for Chris Blose. On the restart, Roczen turned it around. He got out front with Webb and Anderson next. Tomac was fifth but went down and remounted in 14th. Davalos was fourth after two laps with Stewart and Cianciarulo fifth and sixth. Tomac accomplished some serious magic in the early laps to climb all the way to seventh. In the middle of the race, Anderson passed Webb for second and Cianciarulo passed Davalos for fourth. Then Tomac also passed Davalos, which gave him enough points for second in the overall standings. The last laps provided a spectacular race between Webb, Cianciarulo and Tomac. Cianciarulo ultimately fell in the whoops with two laps to go, forcing Webb to wheelie over his bike. That put Tomac in a distant third behind Anderson.