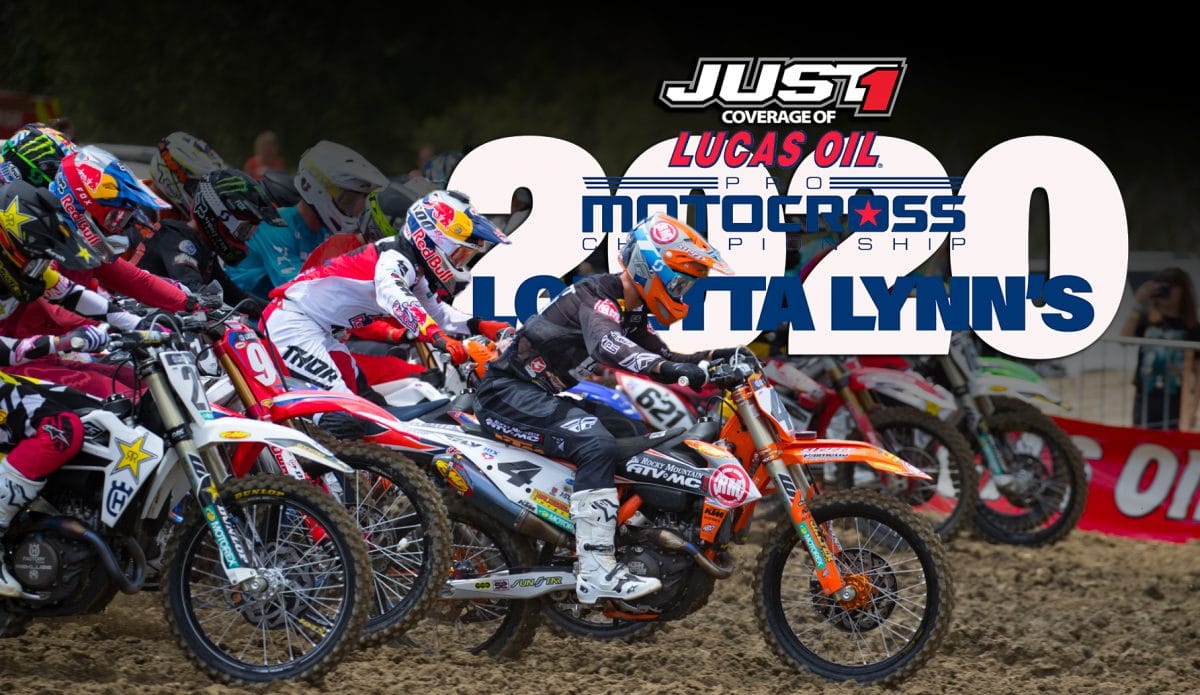 After a long wait and some concern that we may not see any racing this summer, the 2020 Lucas Oil Pro Motocross Championship is finally set to take off tomorrow at the historic Loretta Lynn’s Ranch in Hurricane Mills, Tennessee. With most of the racers in both the 250 and the 450 fields having come up through the amateur ranks coming to this track once a year for the amateur national, the forested venue adds a bit of nostalgia on top of the nerves of heading into round of the outdoor series, since most of the racers haven’t been here since they were young children and teenagers. So aside from the bit of a homecoming to many of the folks signed up to race this weekend, there’s plenty more to get into before we head into round one tomorrow afternoon: (for extended coverage of the 2020 Loretta Lynn’s National MX, click here.)

Like  most years, the 250 class has had a little shuffle in its overall roster with veterans of the class moving up to a 450 for the new season and rookies making the step into their professional racing careers for the first time. This year, racers like the 2019 250 class champion Adam Cianciarulo and two-time 250 class supercross champion Chase Sexton have made their transitions into the 450cc division, leaving the rest of their past competitors to duke it out during this condensed 2020 championship.

Monster Energy/Star/Yamaha Racing teammates Dylan Ferrandis and Justin Cooper are two of the returning 250 class competitors looking to capture the 2020 title, as they were both in the fight all the way down to the final motos of the 2019 season last year. After clinching his second consecutive 250 class supercross championship and with a nearing 450 career in his sights, Ferrandis will undoubtedly be looking to finish out his time on the 250 on a high note.

Both Hunter Lawrence and his younger brother Jett will definitely be forces to be reckoned with in this upcoming season. Throughout the chaotic Supercross season, Jett showed tremendous speed and that he wasn’t afraid to mix it up with all of the regular front runners. In his first three races during his pro debut last year, Jett was able to gather up a handful of good finishes, evening finishing the year out with a top fifteen overall at the season finale at Ironman. With even more time under his belt get used to the pace of the 250 class, expect to see those results improve this year. For Hunter, the same is true. Although he experienced his fair share of bad luck last summer, he also racked up a good few moto wins and overall podiums, which should only continue to add up this year.

Many of the regulars of the 250 class will also be in the hunt for moto wins throughout the course of the outdoor championship. You can never count out either of the Martin brothers, Alex having a number of wins to his name and Jeremy with his two 250 class championships. You also have guys in the class like Shane Mcelrath who are looking to cap their 250 careers off with a bang in order to secure a 450 ride starting next year. Aside from all of the regulars, there a few rookies making their jump into the pro ranks. Rockstar Energy/Husqvarna is bringing up Stilez Robertson after his run of success at the Loretta Lynn’s Amateur National just about a week ago, as he took home both the 250 and the Open Pro Sport championships. Other newcomers to the series include Joshua Varize, aboard an Orange Brigade KTM, Hardy Munoz on his Husqvarna FC250 and Mason Gonzalez, who also had good results at the amateur national last week, finishing just behind Robertson in both pro sport classes.

I think it’s safe to say the 450 class going into the 2020 Lucas Oil Pro Motocross series is pretty stacked, with at least a dozen guys who all have some form of professional national championship sitting on their resumé. Eli Tomac is going to be the man to beat, coming into this year’s series with not only just his three consecutive outdoor titles, but also with the momentum of earning his first 450 class Supercross championship just a couple of months ago in Salt Lake City.

Marvin Musquin wrapped up his 2019 Pro Motocross Championship strongly with a third overall in the series and a handful of moto wins throughout the series. Unfortunately for Marvin, just before the 2020 Supercross season, he suffered a knee surgery that left him out of competition up until now. On the bright side, he has had eight months to heal up and focus his attention onto this 2020 outdoor championship, so he should be strong and ready to go for tomorrow.

Earlier this week Ken Roczen made an announcement saying that he would be withdrawing from racing this summer in order to focus on his health and the birth of his first child, who Ken and his wife are expecting some time next month. To fill the spot under the HRC tent is Christian Craig, who has shown some phenomenal speed aboard the 450 Honda in past motocross seasons.

Joining Craig at the Factory Honda truck is 450 class rookie Chase Sexton. It’s no secret that the two of them hold a strong bond together, which will most likely make the transition onto the bigger bike a much more comfortable feeling. Sexton is also coming off of a dominant run to his second 250 class supercross championship, so that confidence will definitely play to his advantage coming into his first races aboard the 450.

Adam Cianciarulo made his jump up to the big 450 last year for the Monster Energy Cup and ended up taking the final moto win as well as the overall win in his first attempt in the premier class. He showed great speed during his rookie season of Monster Energy Supercross, but suffered some bad luck with crashes and injury. Although he didn’t have the supercross season he was hoping for, it wouldn’t be the first time he bounced back from adversity to rise to success…

Guys like Jason Anderson may not have been in the hunt for the championship toward the end of the season, but you definitely can’t count them out. Along with Jason, there are guys like Cooper Webb, Zach Osborne, Blake Baggett, Broc Tickle and others who all share the potential and the speed to fight for that 450 class title. This whole year has been pretty crazy so far, and the 2020 Lucas Oil Pro Motocross Championship looks to be no exception with a stacked field of riders. Weirder things have happened over the span of the last eight months, so there’s no telling what this season has in store for us.

Washougal Out, Loretta’s Back to Back Weekends

Just as a heads up to everybody, the second round of the 2020 Lucas Oil Pro Motocross Championship at Washougal has been cancelled, but will instead be held back at Loretta Lynn’s Ranch next weekend. Click here to read more.