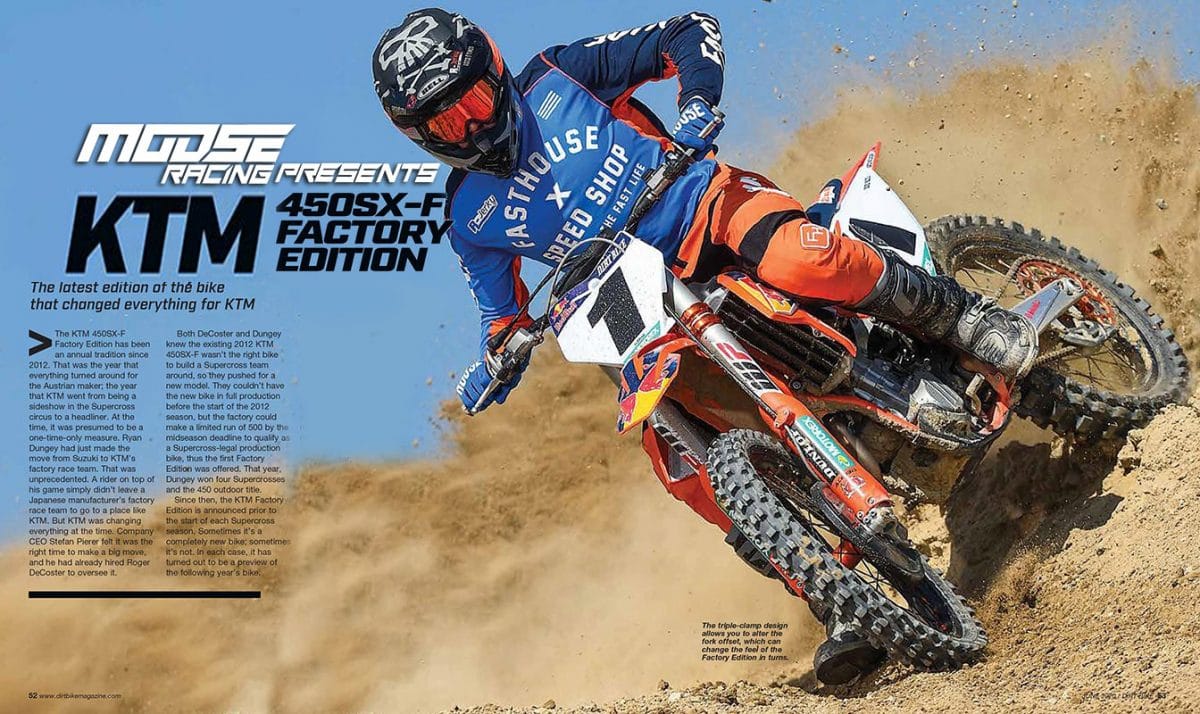 The KTM 450SX-F Factory Edition has been an annual tradition since 2012. That was the year that everything turned around for the Austrian maker; the year that KTM went from being a sideshow in the Supercross circus to a headliner. At the time, it was presumed to be a one-time-only measure. Ryan Dungey had just made the move from Suzuki to KTM’s factory race team. That was unprecedented. A rider on top of his game simply didn’t leave a Japanese manufacturer’s factory race team to go to a place like KTM. But KTM was changing everything at the time. Company CEO Stefan Pierer felt it was the right time to make a big move, and he had already hired Roger DeCoster to oversee it.

Both DeCoster and Dungey knew the existing 2012 KTM 450SX-F wasn’t the right bike to build a Supercross team around, so they pushed for a new model. They couldn’t have the new bike in full production before the start of the 2012 season, but the factory could make a limited run of 500 by the midseason deadline to qualify as a Supercross-legal production bike, thus the first Factory Edition was offered. That year, Dungey won four Supercrosses and the 450 outdoor title. Since then, the KTM Factory Edition is announced prior to the start of each Supercross season. Sometimes it’s a completely new bike; sometimes it’s not. In each case, it has turned out to be a preview of the following year’s bike.

2020½ IS HERE
This is one of those years when the Factory Edition has a very short list of updates. There’s nothing about it that would make it illegal in AMA competition; no changes to the frame or engine cases. It is simply a race replica with a big number-one plate to commemorate Cooper Webb’s 2019 Supercross Championship. The most important new feature is a rethink of the WP Xact air fork. KTM has reaffirmed that they love this fork, and it isn’t going away any time soon. As we all know, three of the four major Japanese companies went to air and then came running back. WP’s air fork was the best of them, and that was all the encouragement they needed to stick with the concept and continue development.

Interestingly enough, the changes to the new fork are unrelated to the air chamber. Most are redesigns of the valving system. Of them all, the most important is the fact that the mid-valve now has some “float.” Oil bypasses the valve stack initially, and that makes the valve stack more effective when it comes into play. There’s also a change from a hydraulic anti-bottoming system to a bump-stop rubber. There are a couple of changes to the air balance chamber, too. This is a self-filling chamber that works in opposition to the main air chamber. The passage that fills the balance chamber closes at a different part of the stroke, and the chamber itself has less volume. There are a great number of other suspension changes, mostly concerning friction.

Aside from the suspension changes, the Factory Edition gets new mapping and a long list of extras, starting with the Akrapovic titanium slip-on muffler. It also has a Hinson clutch cover, a machined triple clamp, a holeshot (fork hold-down) device, upgraded wheels and a whole lot of bling, including the orange frame. 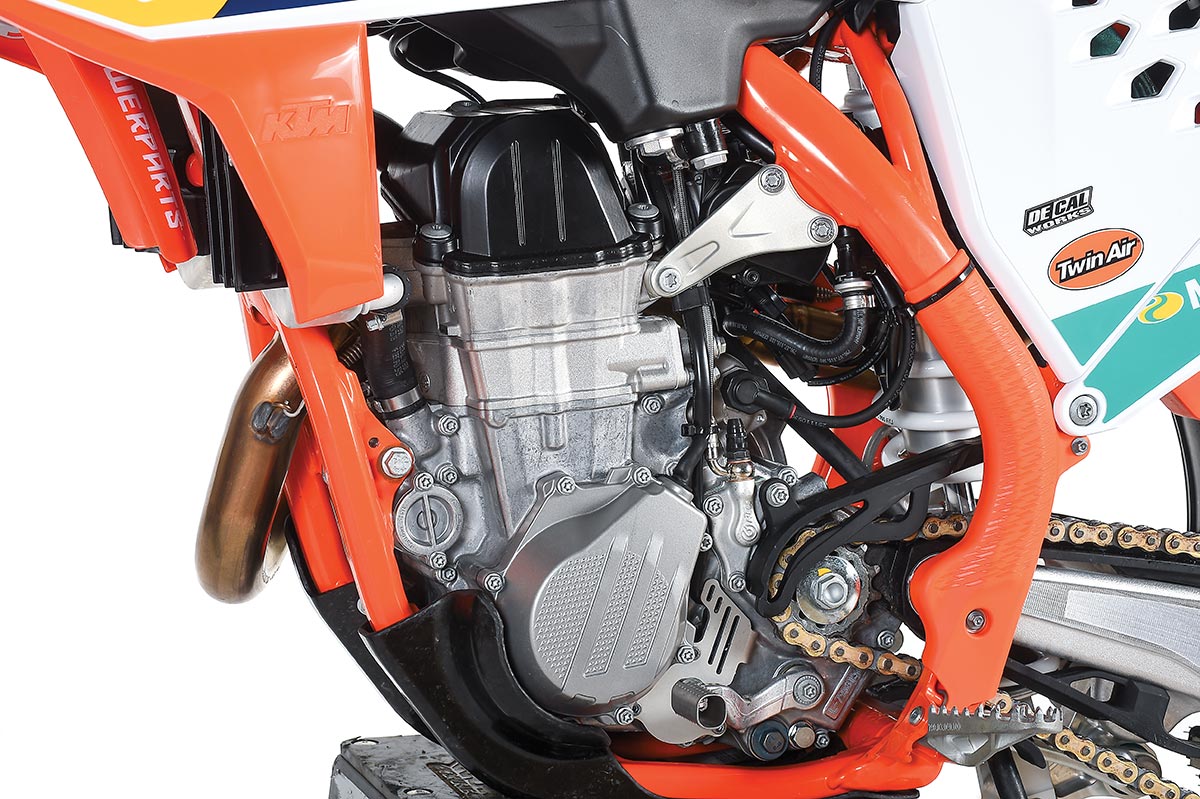 RIDE LIKE COOPER WEBB
Just to be clear, none of these new features and changes have anything to do with Cooper Webb’s bike. His fork is a works version of the WP cone-valve fork. His mapping is entirely different, and his engine is set up for a Supercross-winning Pro. Still, we’re pretty sure that he would approve of the changes to the air fork. We’re stunned at how such seemingly small changes can make a big difference. Our biggest complaint about the standard KTM 450SX-F is that it’s not comfortable. It has a hard, harsh-feeling chassis. The Factory Edition has the same frame, but the harshness is pretty much gone. The bike has a new, cushy, compliant feel that we could learn to love.

There’s also an even bigger difference between the two EFI maps that can be selected through the handlebar switch. Map 2 has more bark. This is much more noticeable than it was last year. Our test bike was delivered with the vented airbox cover, which makes the bike a little crisper through the middle. Between that and the Akrapovic pipe, the Factory Edition is a little more aggressive than the standard 2020 model. It’s still very smooth and controllable, which was always the bike’s trademark. Now, it just has a little more snap.

What hasn‘t changed is the overall handling. It’s still outstanding. Most of this revolves around the bike’s weight. It weighs 223 pounds without fuel in the tank but with all other fluids. We don’t understand how KTM gets its bikes so light when all the other 450 MX bikes are over 230 pounds—in many cases well over. We have heard the engineers at Yamaha say that a KTM wouldn’t pass their “drop test,” which is part of the Yamaha pre-production testing process. We will concede that a YZ450F is, indeed, a very durable bike. But, frankly, we have a few less scientific drop tests of our own that the 450SX-F has survived without issue.

The bottom line is that it’s a stable bike that turns extremely well. It’s easy to throw around and fun to ride. With the new fork, we got to explore a few new settings. In the past, we generally decreased air pressure and compression damping in an attempt to make the bike cushier. This time, we didn’t do that. Some riders concentrated much more on the rear end, typically increasing preload over the standard settings. As usual, it varies from rider to rider and track to track. For tight tracks, the KTM responds well to increased preload. For fast ones, less preload combined with more compression damping is the ticket. Your findings may vary.

FACTORY FACTOR
The 2020½ Factory Edition isn’t a world-changer. It is, however, a refinement of a very effective bike. The standard KTM didn’t need more power. It didn’t need less weight or a complete redesign of anything. The one area where it was lacking was comfort. That’s where it received attention. All the shiny parts are just a bonus. 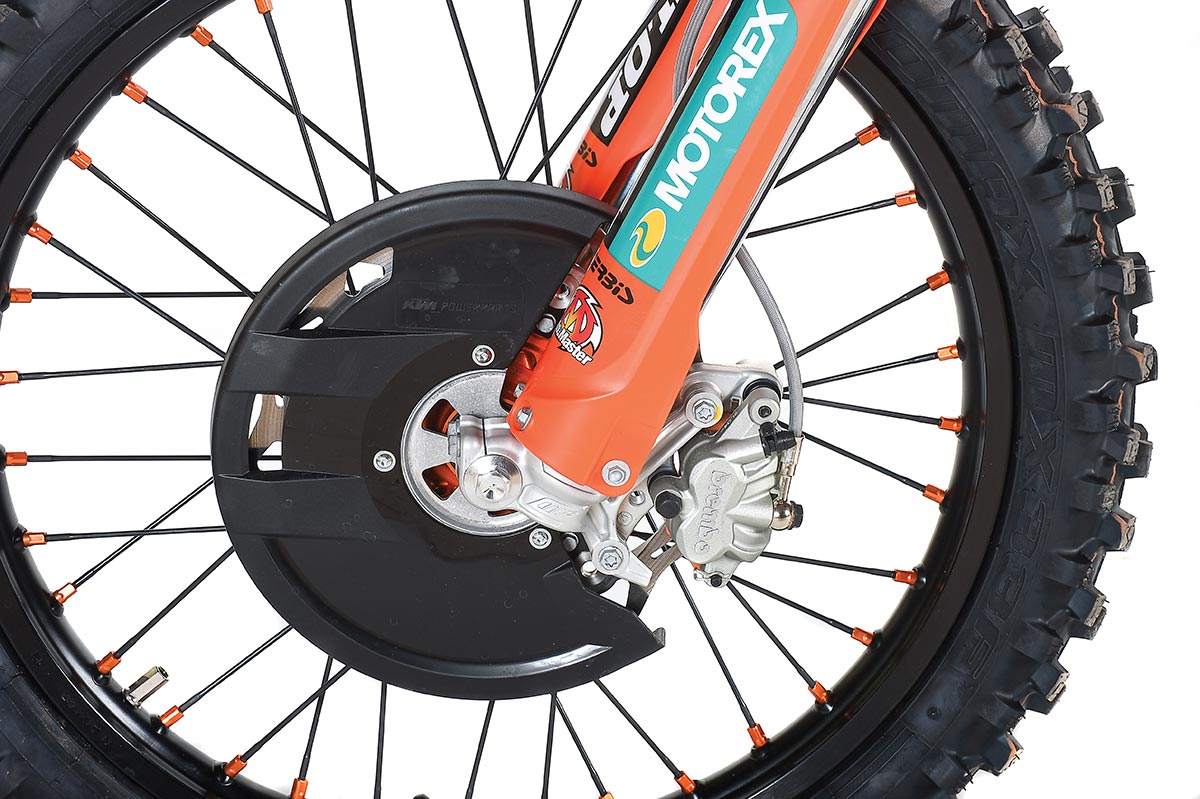