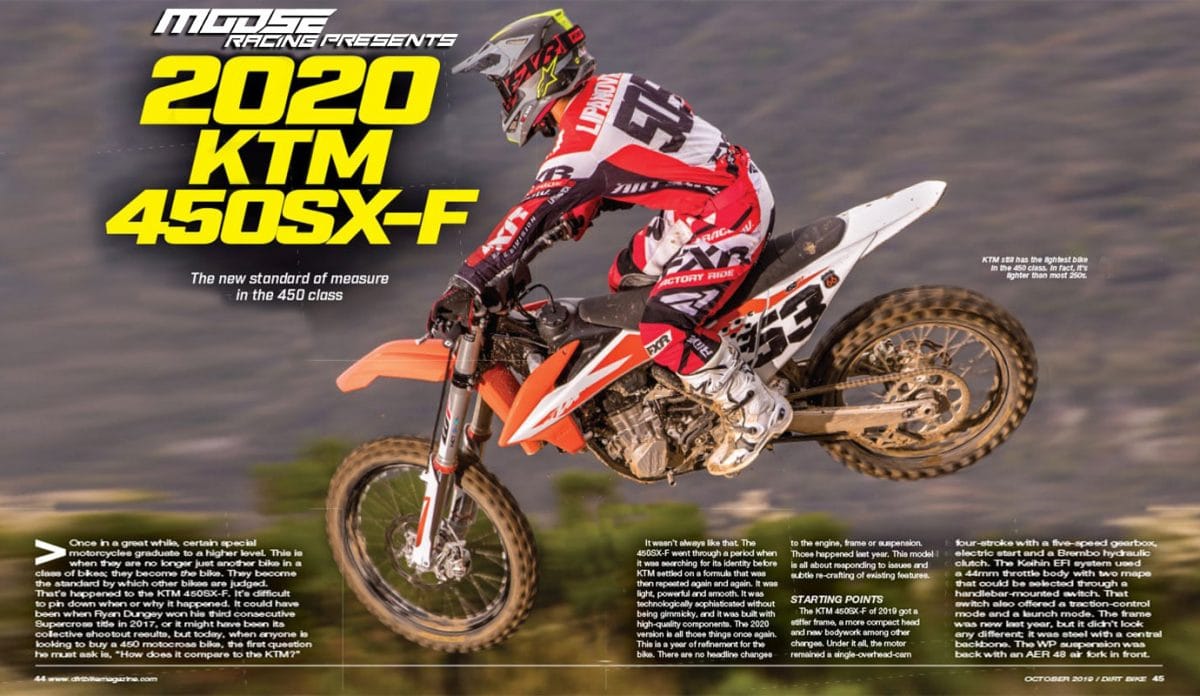 At one time, the KTM 450SX-F went through a period when it was searching for its identity. Then KTM settled on a formula that was then repeated again and again. It was light, powerful and smooth. It was technologically sophisticated without being gimmicky, and it was built with high-quality components. The 2020 version is all those things once again. This is a year of refinement for the bike. There are no headline changes to the engine, frame or suspension. Those happened last year. This model is all about responding to issues and subtle re-crafting of existing features.

STARTING POINTS
The KTM 450SX-F of 2019 got a stiffer frame, a more compact head and new bodywork among other changes. Under it all, the motor remained a single-overhead-cam four-stroke with a five-speed gearbox, electric start and a Brembo hydraulic clutch. The Keihin EFI system used a 44mm throttle body with two maps that could be selected through a handlebar-mounted switch. That switch also offered a traction-control mode and a launch mode. The frame was new last year, but it didn’t look any different; it was steel with a central backbone. The WP suspension was back with an AER 48 air fork in front.
Everything in that general description also applies to the 2020 model. The changes are mostly invisible. The suspension valving has changed, and WP rebranded the fork with a new name. It’s now called the Xact AER fork. The valving and piston changes within were previewed on the 2019 1/2 Factory Edition. The 2020 standard edition got a few more changes, starting with a new piston with a redesigned skirt. This was done mostly for reliability reasons. The EFI mapping was changed, and the rear sprocket was increased by one tooth to a 49.

KTM has always supplied a number of parts with the bike. This year there’s a big addition to that package. An extra airbox cover is included with a number of large pre-cut vents. This is in response to a common criticism of the 2019 model. When that bike arrived, some riders complained that it didn’t have the same snap off the bottom as the 2018 version. The knee-jerk response in the field was to go crazy with a cordless drill making holes in the number plate, allowing more air into the motor. KTM designers must have cringed at the ugly results, so now they’ve done it for you. The bike still comes with an unvented cover in place. The parts kit also includes an optional large throttle pulley to make the throttle turn more quickly.

THE TALE OF THE TRACK
If you’re a KTM fan, the 2020 model doesn’t have any surprises. It’s still the same basic bike and still the class standard; it’s fast, it’s light and it turns exceptionally well. The 2020 KTM 450SX-F comes in at the same weight as the 2019 model—223 pounds without fuel on our scale. That’s freakishly light. None of the Japanese manufacturers can even come close. The 2019 Honda CRF450R, for example, weighs 239 pounds, and it’s not even the heaviest. That, without any other factors, gives the KTM a head start on all other 450s. It affects everything, including real-world acceleration and braking power. But more than anything, it makes the bike super easy to handle. The KTM is already narrow and has good, neutral handling manners, and when you throw in the fact that it weighs less than the average Barcalounger, the bike’s overall handling is hard to beat.

The chink in the KTM’s armor has always been suspension, going back to the days when the company was an obscure name in the European cottage industry. A few years ago, KTM got in front of that issue by buying the Dutch WP factory and physically relocating it to Austria, down the street from the motorcycle factory. The corporate bosses made suspension a priority, and the performance of WP’s products began to improve. The AER 48 air fork was one of the first of the resulting products. It was designed in the heyday of air-fork hysteria and was a big contributor to the bike’s light weight. The main departure from the various Japanese air forks that have come and gone since then is the simplicity that it offers the end user. Don’t confuse that with conceptual simplicity—the AER uses a very sophisticated design that recharges its own balance chamber without the rider even knowing it’s there. The fork is simple to use because it has a single air chamber in one leg. The other leg has more or less conventional clickers on the top and the bottom.
Despite the fork’s new name for 2020, it still has the same overall design, and the performance is still quite good. It doesn’t offer the same plushness as some of the current Japanese coil spring forks, though. Honda and Yamaha are on top of the front-suspension pecking order for most riders, but only if you fall into the expected weight and riding style. The true wonder of air suspension is that it can work for anyone without the need for a new spring. The 2020 KTM front end has a sticker on the side with the recommended air pressure of 10.5 bar, which translates to 151 pounds. Most riders like it softer, but for different reasons. Hard-charging racers are generally younger and lighter, while the older, heavier riders aren’t as aggressive and want it more cushy. Everyone agrees that KTM upped the feel of the fork for 2020, particularly on small impacts. 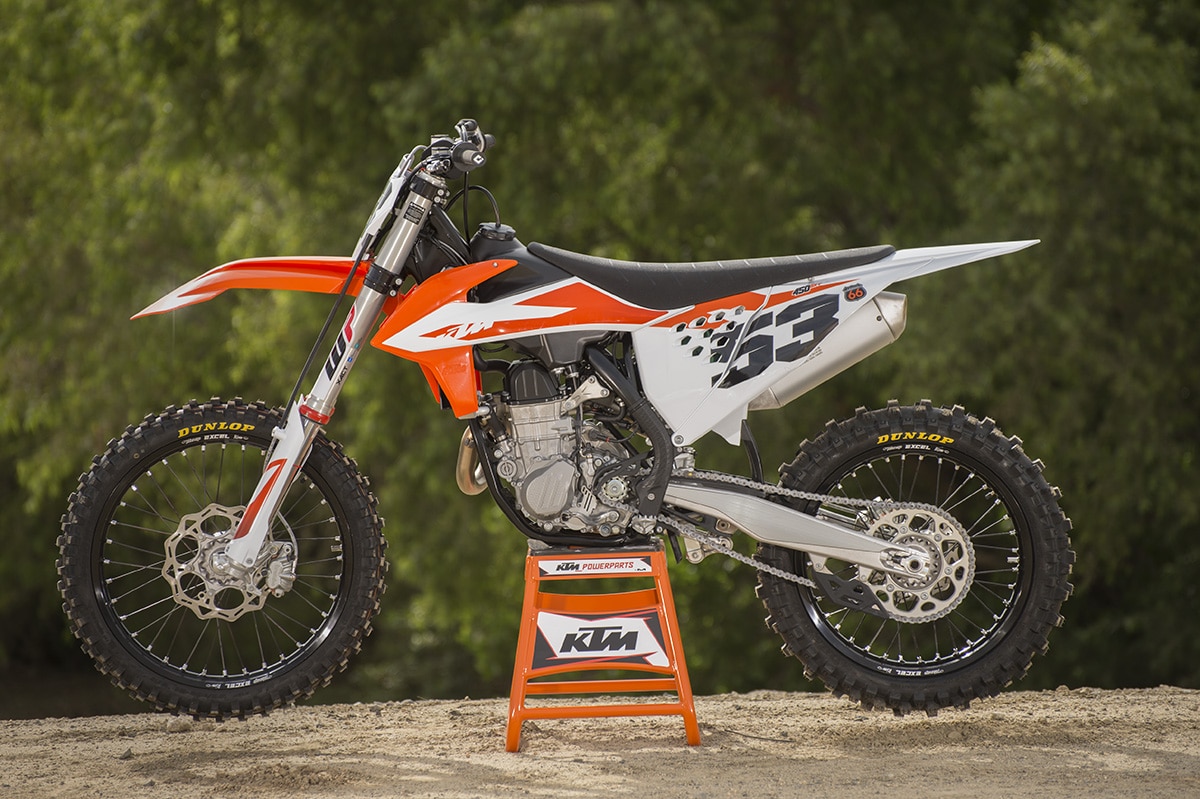 THE POWER OF THOUGHT
In 2019 KTM received complaints because the new bike had a softer power delivery than previously, prompting the frenzy of airbox modifications. For the record, we weren’t among those who went Makita-happy. The smooth power delivery gave the SX-F a friendly nature that belied its true power output. In the real world, most 450s are rarely given full throttle for more than a fraction of a second at a time, so there aren’t that many riders who can benefit from a more aggressive power delivery. Still, snappier power is exciting and fun, so who are we to deny riders that thrill? We started off with the standard airbox cover in place, and the KTM 450SX-F was the same smooth, controllable and powerful bike that we’ve come to know and love. With the vented cover in place, it gained a slight amount of power throughout the range. It didn’t necessarily get any more abrupt, but the difference was most noticeable down low. The real change didn’t come until we switched to map number two, which is supposed to be the most aggressive. Then the motor had considerably more snap. KTM engineers must have grown tired of people saying that they couldn’t tell the difference between the two maps. Now, it’s very clear. We still don’t know if it translates to quicker lap times, but it clearly made the bike a little more exciting, and even the most conservative test riders eventually admitted to liking map two with the vented airbox better. We also tried the larger throttle pulley, but universally our riders preferred the longer pull of the standard throttle.
Even in its most aggressive configuration, the KTM is still very mild and manageable by 450 standards. That is ultimately the goal for a modern 450 motocross bike. None of them are wanting for power. The trick is allowing riders to use the power that’s already there. 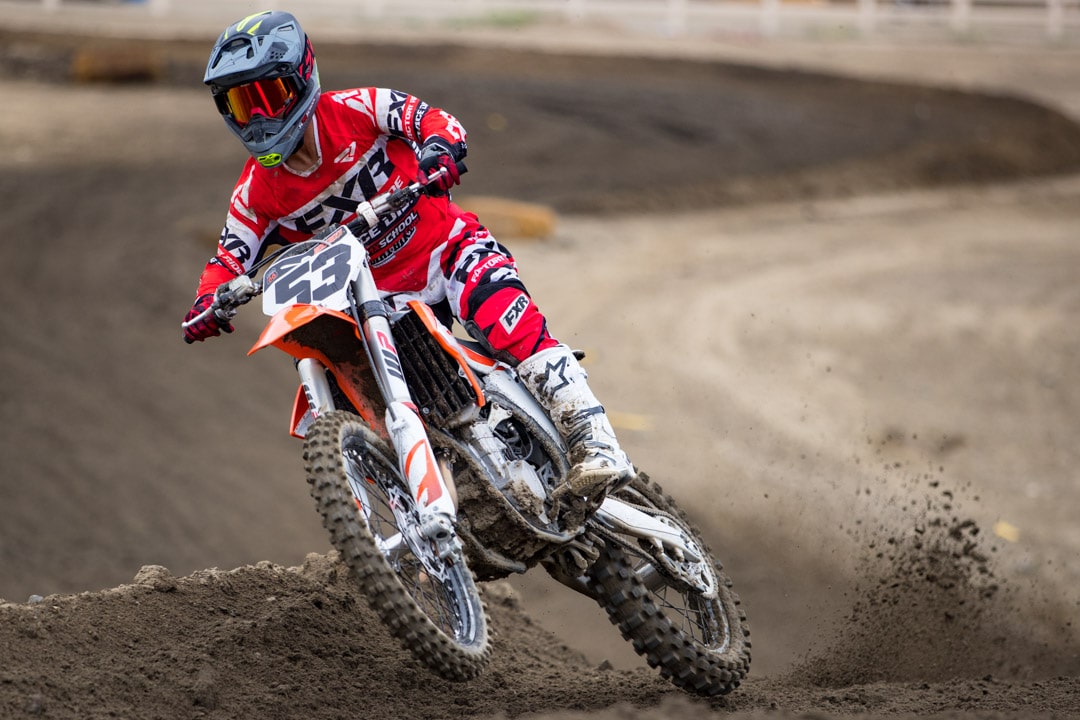 THE BIG PICTURE
As we said up front, the KTM is the measuring stick of the 450 class. It’s been that way for some time, even though it hasn’t always been the designated winner of the Dirt Bike 450 shootout. In 2019 Kawasaki copied the KTM playbook to the letter and came up with a bike that we liked slightly better. Are the subtle changes on the new KTM enough to help it retake the lead? That remains to be seen. Stay tuned.