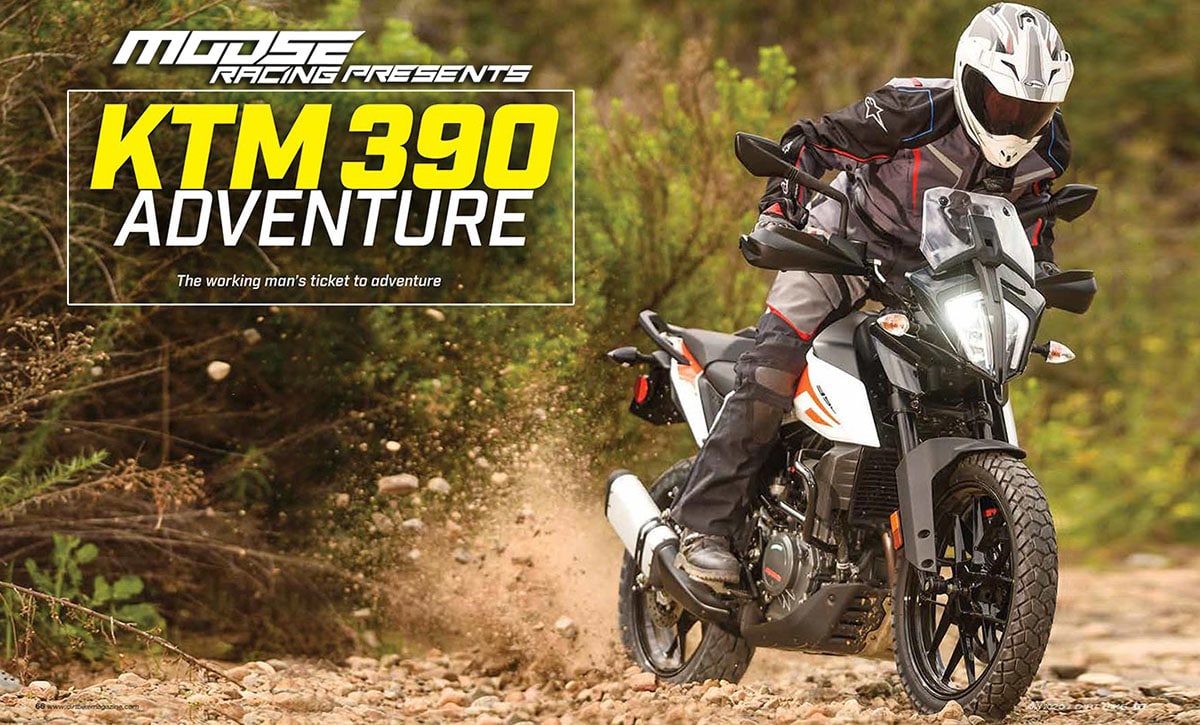 KTM knocked it out of the park with the 790 Adventure last year. It’s a stunning motorcycle that broke new ground in off-road performance and accessibility for a full-sized ADV machine. Even though the performance-to-price ratio was better than anything that came before it, the 790 was still out of reach of many would-be off-road world-trotters. That’s why the 390 is the perfect follow-up. If you can afford any new motorcycle, you can afford a 390. 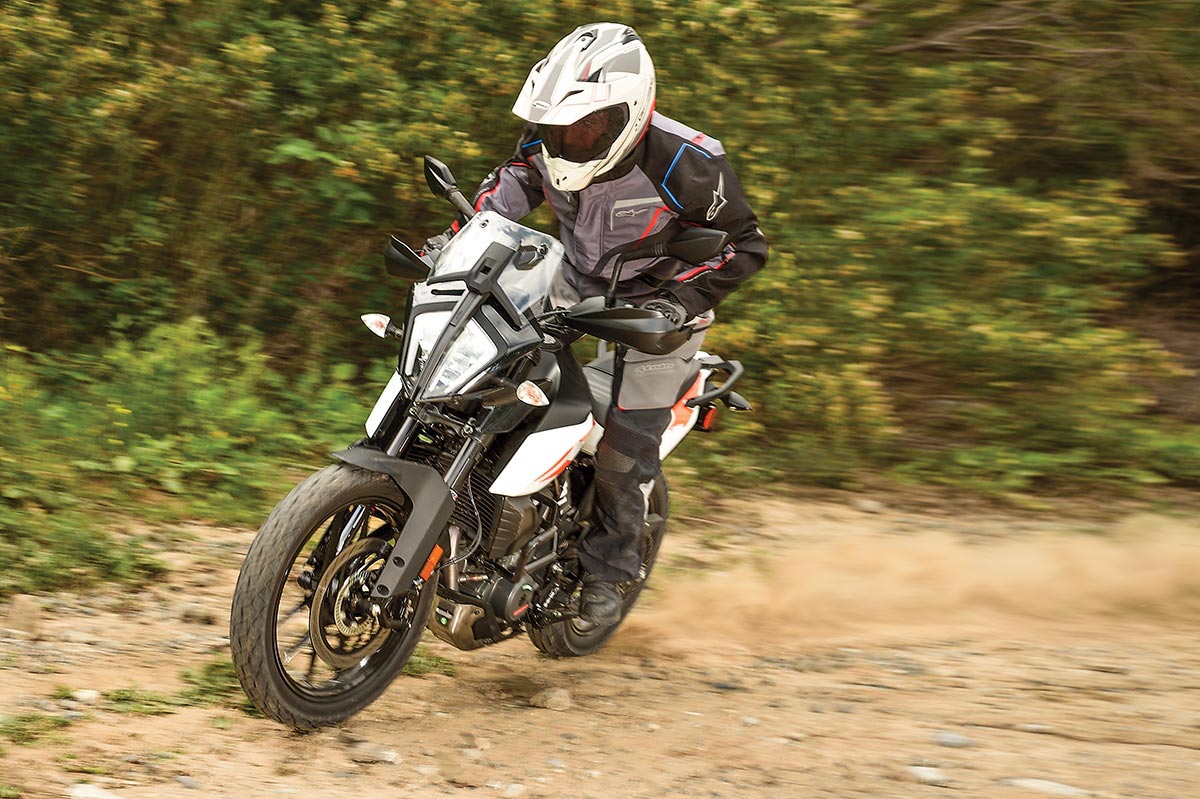 THE VOLKSMOTO
This bike is completely new to us simply because we have no foundation with its blood brother, the 390 Duke street bike. The Duke line has been around for a long time and has a cult following among street guys. The 390 Adventure is an outgrowth of that, with a motor that was designed in Austria and built in India to keep the price down.

The 390 motor is a DOHC, 373cc single with a 6-speed gearbox and a 10,000 rpm redline. It’s said to produce about 42 horsepower. The trellis frame of the 390 Adventure is similar to that of the Duke, if not identical. What makes it an adventure bike is everything else: the suspension, the subframe, the fuel tank, the bodywork, the instrumentation and the rider positioning. The engineers moved the footpegs about 4 inches forward with new brackets, gave it off-road-appropriate pegs (with removable rubber inserts), and new brake and shifter pedals. The suspension is what WP calls its Apex line. The fork has the compression-damping clicker in the left side and the rebound in the right. The shock is very basic with nothing other than a step-cam preload adjuster and a rebound clicker. It bolts directly to the swingarm sans linkage. KTM also developed off-road settings for the anti-lock braking, which is focused on the front wheel. The brakes themselves are Bybre, which is an Indian subsidiary of Brembo.

The real hallmark of KTM’s adventure line is the emphasis on traction control. On the 790, 1090 and 1290, traction is monitored by a digital program that opens and closes the throttle even when the rider doesn’t. The twist grip isn’t actually connected to the throttle body by anything as primitive as a cable; everything is ride-by-wire. The 390 has the basics of that same system, just not as sophisticated. There are only two settings—on and off. You can turn off the traction control easily, but when you do, every time you restart the motor again.

The reason this bike exists is all about price: $6199. That’s pretty amazing—for less than a 125 MX bike, you get a lot of technology and performance. It has none of the earmarks of a budget motorcycle. It has a tapered aluminum handlebar, handguards, a two-piece seat, standard-equipment crash bars and an instrument panel that looks like an iPad mini. 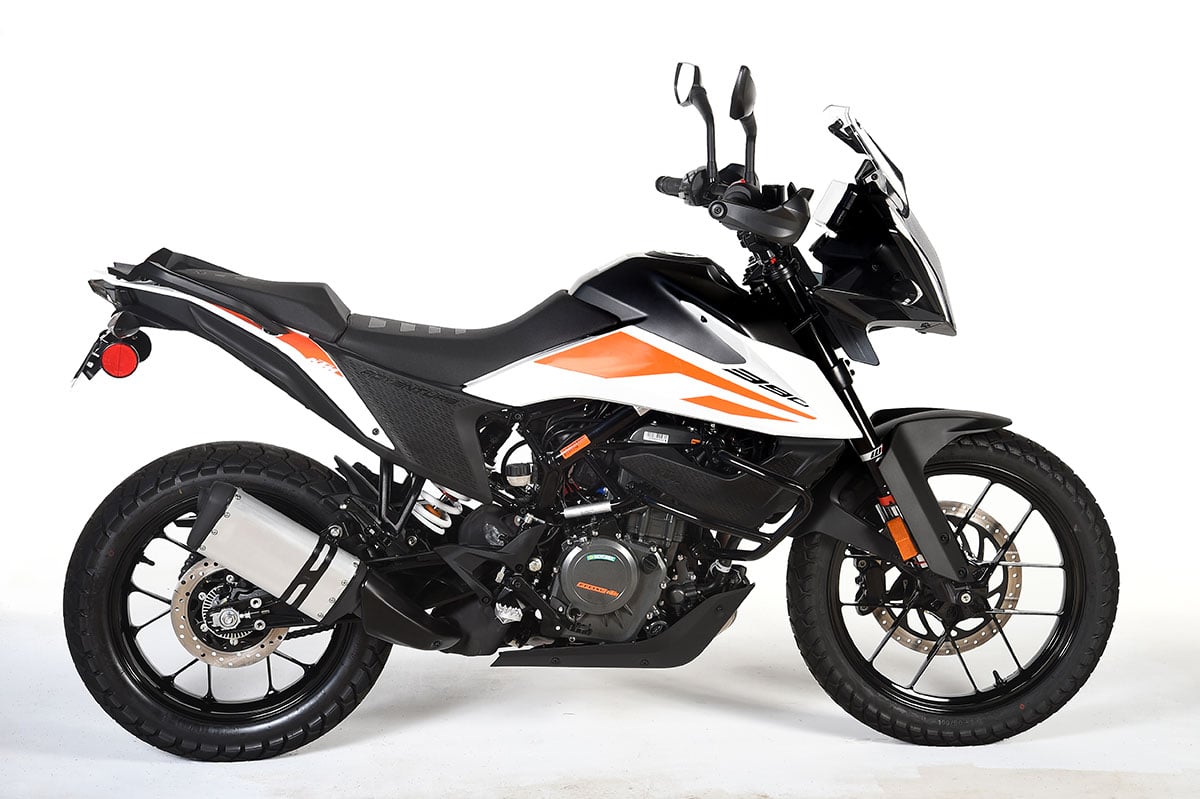 BIG ADVENTURE WITHOUT THE “BIG”
We can see why canyon racers love the Duke. The motor is quick, responsive and has surprising torque. KTM got way more power out of this motor than out of the 350EXC dual-sport, which is much more expensive and should be more sophisticated. Go figure. The bike accelerates fairly hard, and even when you’re up to freeway speed, it  has more acceleration left. If you’re on a street ride with your Ducati and BMW buddies, you might force them into seriously illegal activities by staying with them too easily. Eventually, they’ll be doing crazy high-speed stuff just to prove they can. Start baking a cake with a file now.

Everything about the 390 is easy. It starts, it isn’t especially cold-blooded, the clutch has an easy pull (even though it’s not hydraulic) and shifting is easy. As usual, you might have to raise the shifter and brake pedal because they’re in a very street-oriented position. Our bike didn’t have the optional QuickShift accessories, which is supposed to allow for easy shifts without the clutch. Frankly, we don’t know how it could be any easier than it is already. The bike does come stock with a slipper clutch, which reduces engine braking. You only notice this if you bang down a couple of gears on the street without slowing down much. In the dirt, it’s not particularly useful.

Riding the bike off-road is fun, because it has good power and it’s so much lighter than bikes like the 790 Adventure. The tires are a big limitation, though. The Continental TKC70s are pretty much full-time street tires that have little in common with the more accepted TKC80s. The rear tire size is 130/70-17, and we’re looking for something more aggressive before we get too serious in the dirt. That’s not a particularly common size in a knobby, but Kenda, Shinko and Pirelli have tires that are just a touch bigger and should fit.  Check back for a review in the near future.

Even with the stock rubber, you can maintain a decent pace on a twisty dirt road. The bike is so light and unintimidating that it puts you immediately at ease if you have any adventure bike experience at all. If you don’t, it’s a great place to start. You have to ride the 390 in what we’ll call the “adventure bike posture,” just like a 790 or a 1090. That means you never sit down unless you’re on a smooth, straight section. In any turn, the seated position puts you too far rearward to properly weight the front wheel. That’s standard fare for virtually all adventure bikes and even some of the larger dual-sport models. Traction control is usable in the dirt, but not nearly as advanced as the system on the 790. It works on level ground, but it kicks in immediately if you try to go uphill.

THE LONG HAUL
The 390 has all the right credentials to make a run at any organized ADV ride or Backcountry Discovery Route. In case you don’t know already, RideBDR.com is a non-profit that posts track logs, mileage and information for established off-road adventure rides in about 10 states. You need to be able to carry everything on your bike for days of riding and, in some of the longer sections, you might have to clear around 140 miles on a tank of gas. The 390 has a 3.8-gallon tank and always gets better than 50 mpg, so range won’t be an issue. KTM already has a number of accessories, including GPS mounts and soft bags in its PowerParts catalog, and you can bet there’s an avalanche of aftermarket accessories on the way. 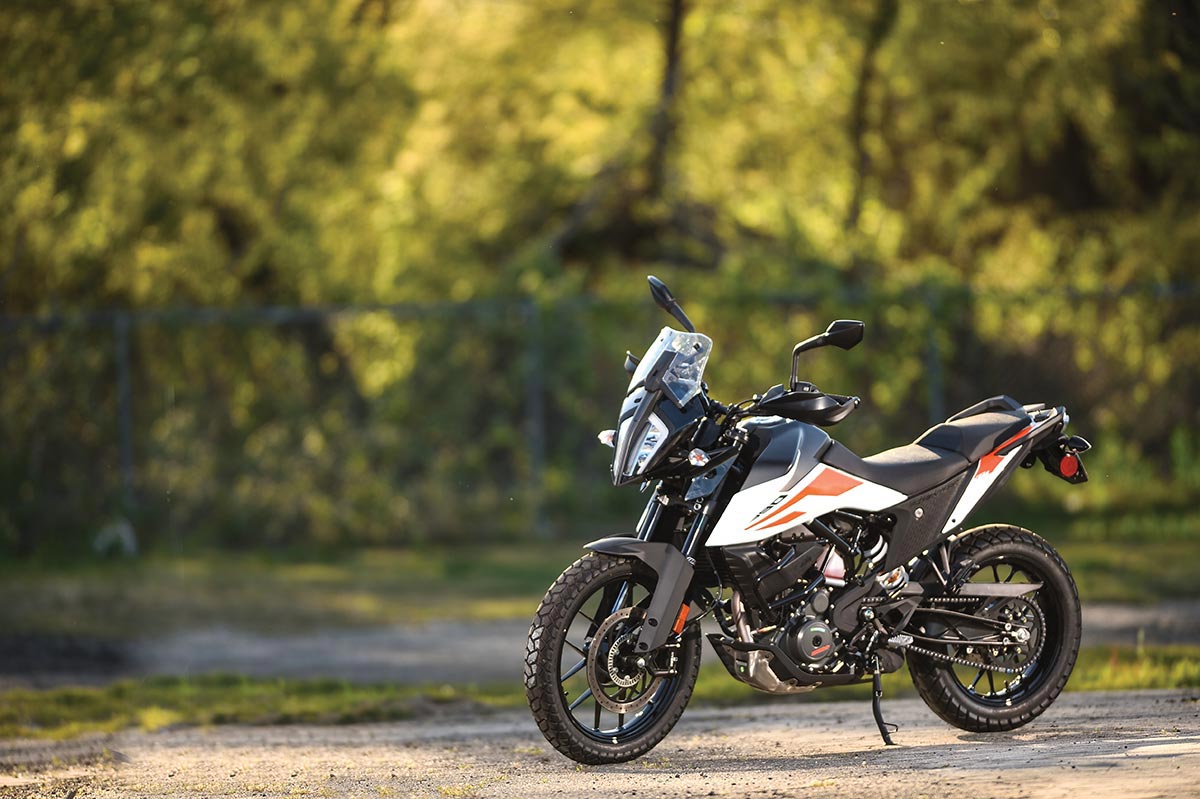 If you can see yourself in this kind of lifestyle, the 390 is a low-risk way to try it on. It offers much more than other bikes in the same price range, which is a short list. There are 300cc adventure bike offerings from BMW and Kawasaki, and there are budget dual-sport bikes from Honda, Yamaha, Suzuki and Kawasaki. All of them have less to offer than the KTM. The 390 goes beyond being a good choice for your first adventure bike. It could very well end up being the only one you’ll need.