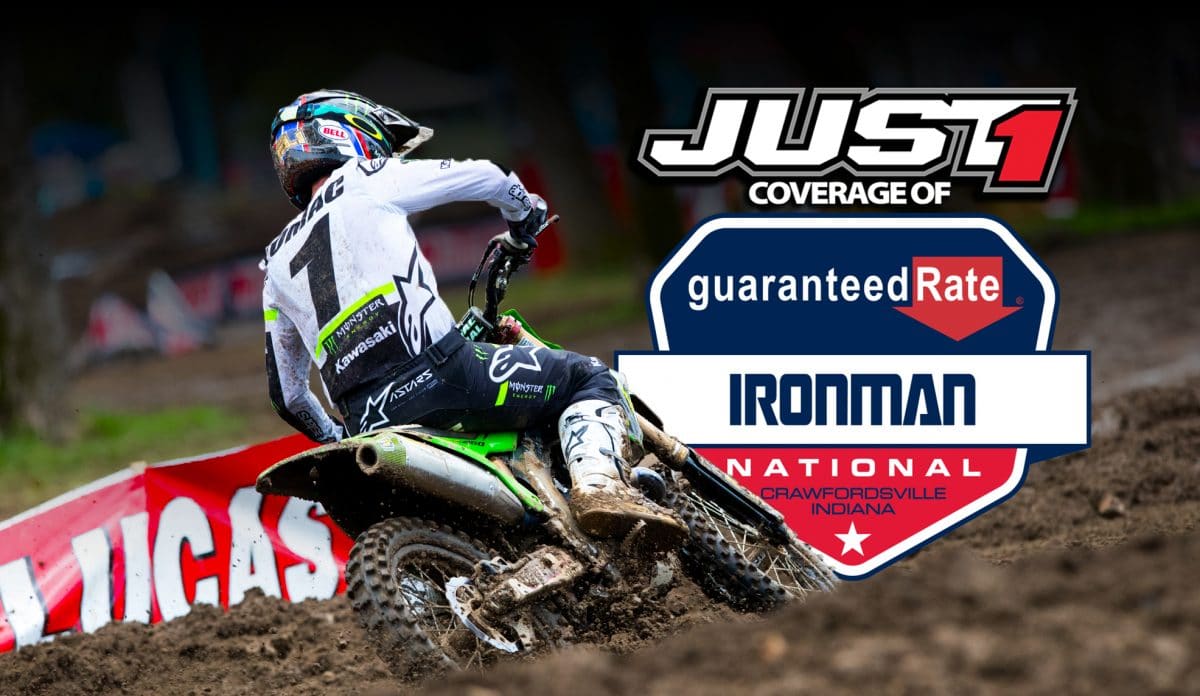 After two weeks of racing down in Tennessee, the 2020 Lucas Oil Pro Motocross Championship heads north to Ironman Raceway in Crawfordsville, Indiana for round two of the series. Series points leader in the 450 class, Zach Osborne made it two in a row at the Loretta Lynn’s Ranch last weekend to further extend his gap over the rest of the field, Eli Tomac DNF’d twice for 9-24 moto scores, the Martin brothers both shared some success in the mud in the 250 class, and there’s plenty more to talk about before going into tomorrow’s racing. (For extended coverage of the 2020 Ironman National MX, click here)

Zach Osborne has absolutely been on fire in the 450 class at the start of this 2020 Pro Motocross Championship. Of the four motos he has started, he won two and his worst finish in the other two was a fifth. During the first moto last weekend, Osborne even had to come from way back in the pack to make it back up to that top five finish. I would consider the Loretta’s track to be the main factor for his winning ways, but even he said after the first round that he didn’t feel all that good on it, so I think we’re simply just seeing a newly emerged Zach Osborne after he took his first Supercross win back in June.

Monster Energy/Kawasaki Racing’s Adam Cianciarulo had an impressive rebound from his gnarly get off at round one of racing at the Loretta Lynn’s Ranch, going 3-5 in the motos at the second round. His good finish last weekend softens the blow from round one a little bit, however, as of now he still sits 37 points out of the championship hunt.

Marvin Musquin has made a strong return to racing this summer after the knee injury he suffered before the Supercross season. A fourth at round one and a third at round two shows his slow progression, plus he would’ve been in the hunt for last week’s overall if it weren’t for an eighth place finish in moto one. Musquin has had some good finishes at Ironman Raceway in the past, so expect him to continue that streak this weekend.

Eli Tomac’s second weekend in Tennessee went from bad to worse pretty fast. During the first moto while running up front, with just a few turns left, his bike quit. Fortunately for him, he had lapped enough people that he was still able to finish ninth. The second moto rolled around, but this time Tomac was down in the first turn after making contact with his teammate, Adam Cianciarulo. While coming from behind, his bike, again, died a few turns from the finish line, but also with a couple of laps left which put him back in 24th for the moto and 16th overall for the day. The back-to-back-to-back reigning champ now sits 40 points out of the points lead.

If Justin Barcia gets a good start, he’s bound to have a pretty good moto, which he proved by winning the first moto by almost a minute over the rest of his competition. Unfortunately for him the bike let go on him during the second moto and he finished 32nd. Also, Fast Freddie Noren is really good at starts. There’s something about that Swedish/Suzuki combo that really suits him well.

Monster Energy/Yamaha Racing’s Broc Tickle has also made quite the return to Lucas Oil Pro Motocross Racing. He didn’t have the best of rides at round 1, but was able to turn it around and finish second in moto one in the mud last weekend and ninth in moto two for fourth overall on the day.

Over in the 250 class, Factory Connection/Geico/Honda’s Jeremy Martin has had an incredible first couple of rounds so far, finishing on the overall podium both times. In fact, he has had virtually the same moto scores at both races, too (2-3 at Loretta Lynn’s 1 and 3-2 at Loretta Lynn’s 2), except last weekend’s result earned him the overall win and little closure of the gap between him and Dylan Ferrandis.

Dylan Ferrandis returned to the Loretta Lynn’s Ranch after a dominant first weekend and scored an honest 2-4 for second overall at the second round of racing. The Frenchman still sits as the points leader coming into this weekend’s round three of Pro Motocross racing.

Big Al’, Troll Train, AMart, whatever you call him, be prepared to keep hearing his name throughout the rest of the series. A seventh in the first moto last weekend kept him from contending for the day’s overall win, but that didn’t stop him from crushing the second moto, winning by over a minute in front of his little brother Jeremy. The two now sit second and third in the points chase.

RJ Hampshire is another rider who had a bitter sweet weekend at the second Loretta Lynn’s national. After claiming second overall at round one and fighting hard for the first moto win last weekend, his second moto came to a screeching halt when his bike died a little over a lap from the end, which was a similar story for many of the racers that day. Regardless, RJ undoubtedly has the speed to continue running up front at the remainder of these races.

A HUSKY TX300 FOR THE NORTHWEST: THE WRAP