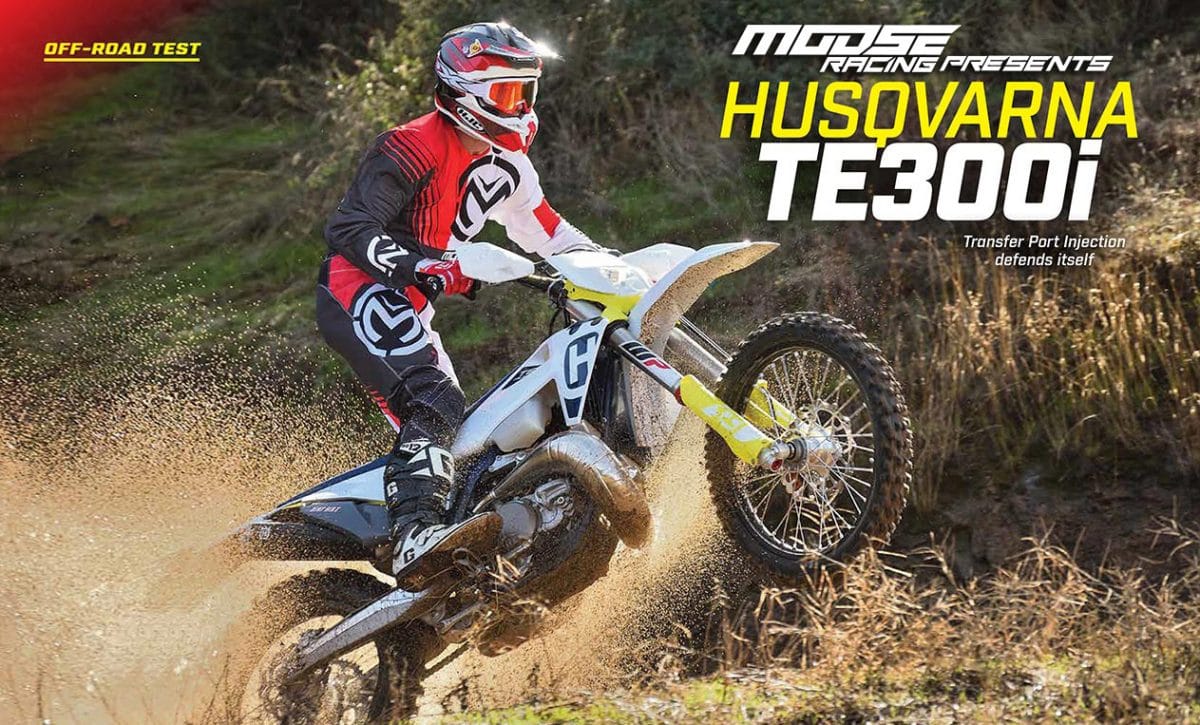 Husqvarna’s Transfer Port Injection is now in its third year, and still the focus of mistrust and controversy. The 2020 Husqvarna TE300i got a new frame, a new look and still more development on its  fuel-injection system. Its performance is so seamless that even the most hardcore two-stroke purist has to concede that the technology has arrived. The main question, however, is still tough to answer: is it better? 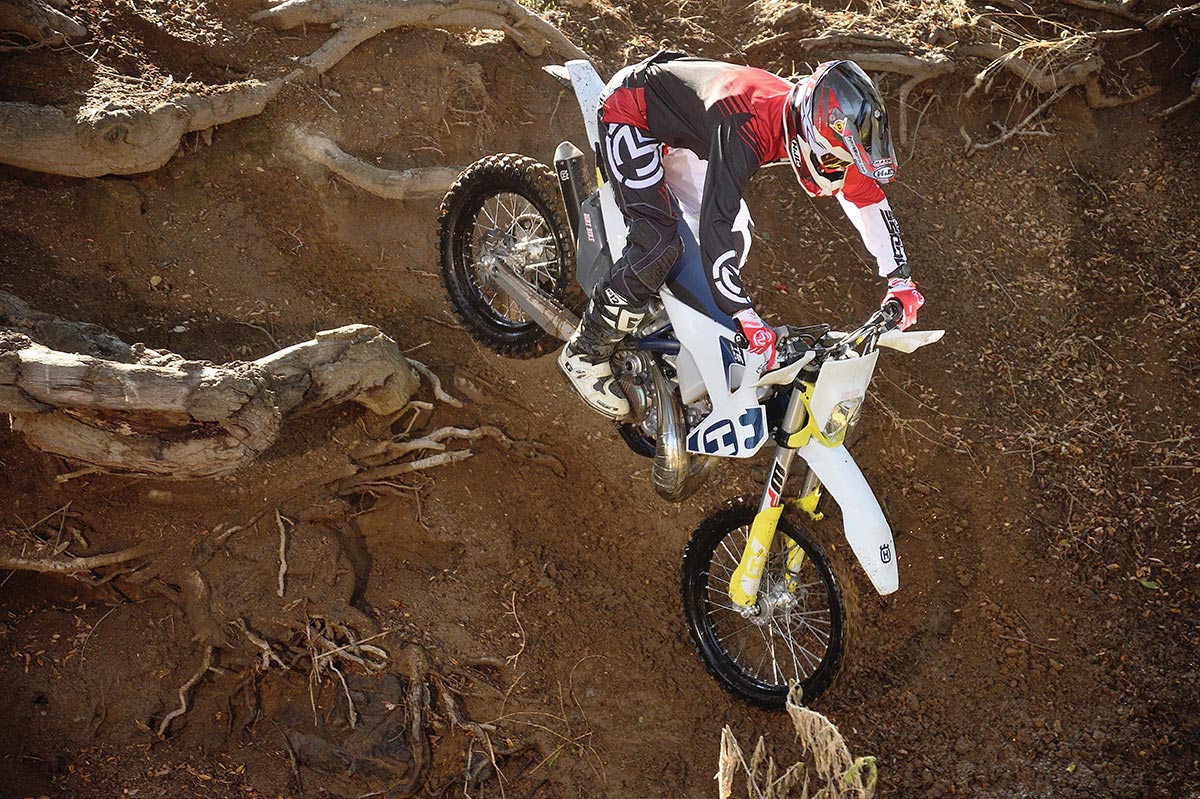 THE BIKE  AROUND THE TECH

The TE300i is an important bike for Husqvarna. Of all the models offered since the company’s rebirth seven years ago, it’s the one that most closely plays to Husqvarna’s fan base and heritage. It’s an off-road bike akin to something from the Malcolm Smith/Dick Burleson era, designed to be at its best in the worst conditions. The 300 two-stroke as a genre is already the subject of cult-like worship in off-road circles. It’s the right size and configuration to appeal to trail riders and off-road racers alike, and that’s a tough feat. The two-stroke remains a big seller for Husqvarna, and this basic platform is available in four different configurations. The most basic one is the TC250 motocrosser. It has a smaller bore, stiffer suspension and is stripped of nonessentials, including electric start. It also remains the only full-sized bike of any kind, four-stroke or two-stroke, with a carburetor. Then there’s the TX300, a cross-country racer with electric start, fuel injection and slightly softer suspension. The TE300 and its near-twin, the TE250, are aimed at the trail rider. They are non-competition models, but this year get frames that are identical to those of the racier TC and TX. Likewise, the TE bodywork is just like the TX’s, with the exception of the headlight and taillight.

The features that set the TE apart start with the suspension. The fork is the coil-spring Xplor 48, whereas the competition bikes have air forks. All use a similar WP Xact rear shock (with linkage), but the TE has off-road valving. The TE also has a slightly wider spread between first, second and third gears. Handguards, a kickstand and an 18-inch rear wheel are standard equipment. Like all of Husky’s off-road models, the TEs have Magura brakes, a Magura master cylinder for the hydraulic clutch, Pro Taper bars and D.I.D rims. The KTM model that most closely resembles the TE300 is the 300XC-W. That bike has the same motor and fork, but uses PDS no-linkage rear suspension, a different subframe and a number of different components. 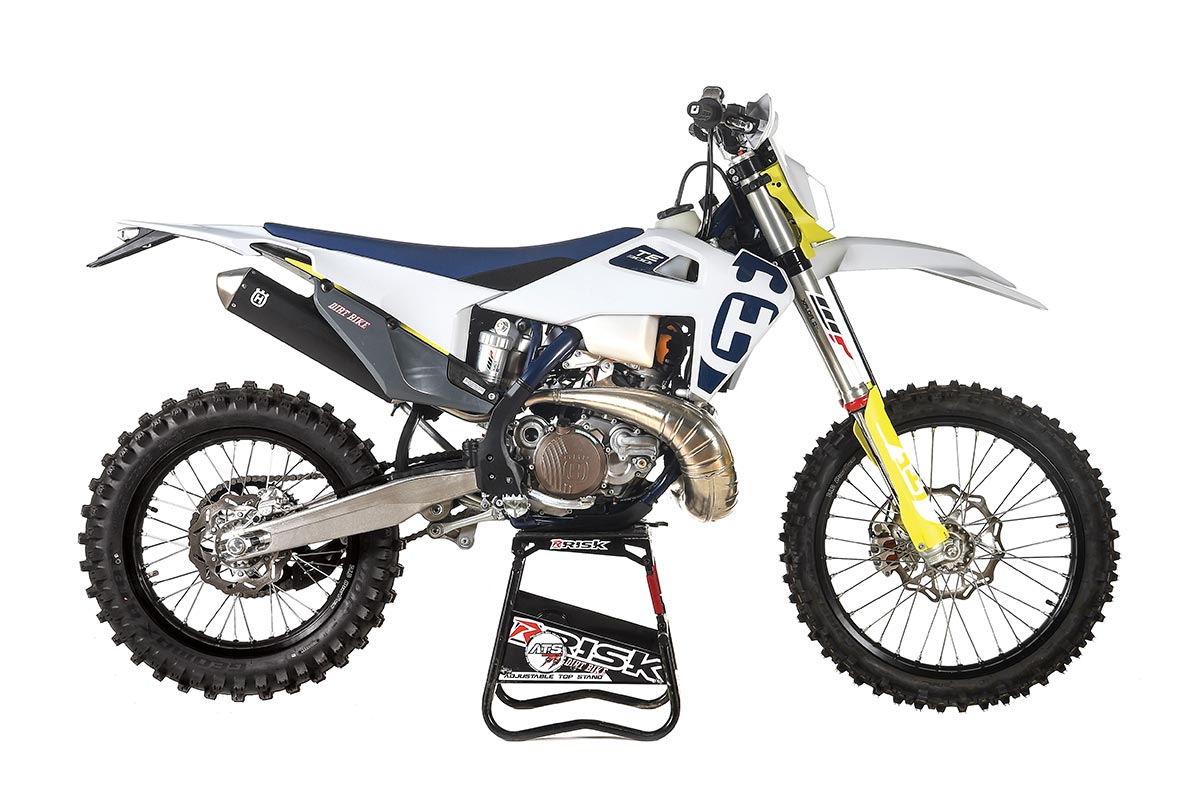 TPI REPORT CARD
Transfer Port Injection was originally developed to help two-strokes get past Euro 4 emissions requirements. Even with that technology, approval is difficult. The homologated version that actually passes has a super-restrictive exhaust system with a catalyst. In the U.S., no two-stroke motorcycle is currently approved for road use or even as an EPA off-road bike, but there has been some recent discussion that it might be possible with the next generation of Transfer Port Injection. The design uses a throttle body that is little more than a butterfly valve feeding clean air to a reed cage. In the intake tract, oil is added to the airflow before it goes down to the crankcase. The descending piston pressurizes the air/oil mixture just like any two-stroke, pushing it up through the transfer ports. That’s where the two injectors add fuel to the mix. The main advantage is less-sloppy fuel mixing and dramatically less oil consumption.

Like any modern EFI system, it’s all digitally monitored, and the mapping has been the subject of all the advancement since the system first came on in 2018. Those first models had a number of glitches that would pop up here or there. There have been updates along the way, and for 2020, Husqvarna felt optimistic enough to put the system on all of its full-sized two-strokes (aside from the TC250, although that almost certainly will come later). 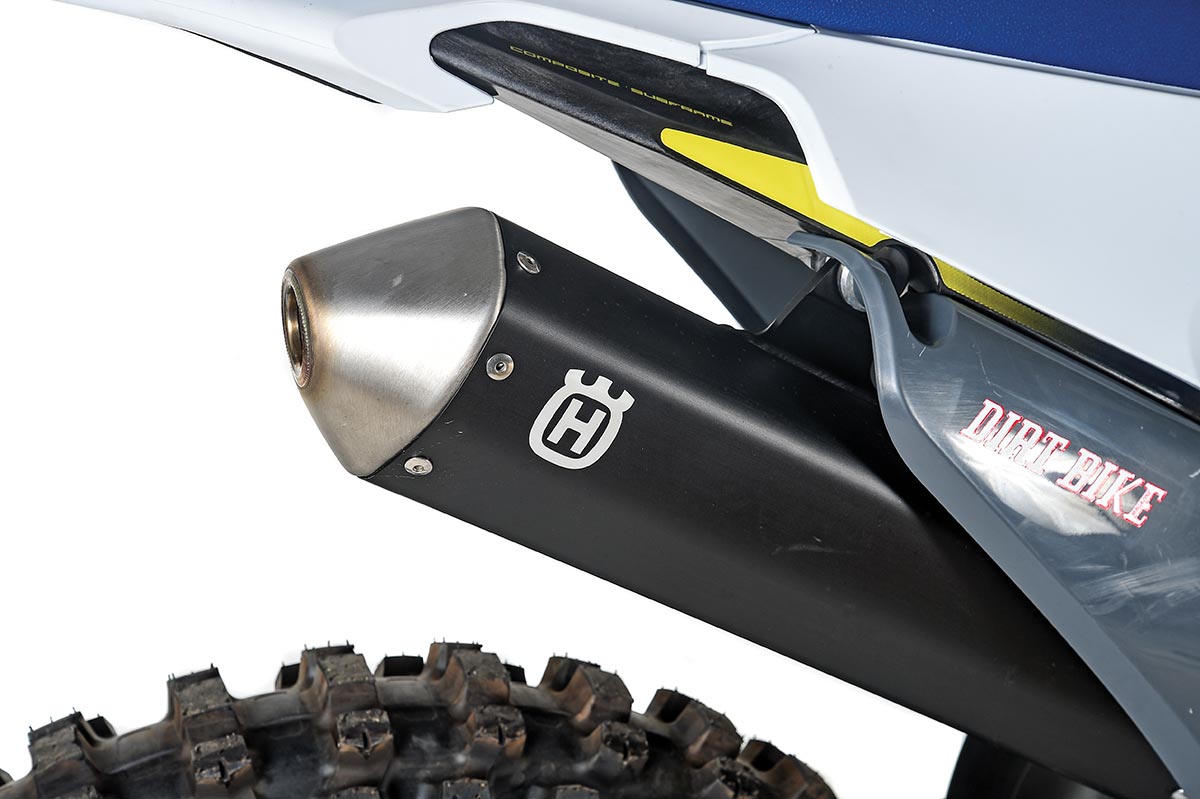 The TE is the more trail-oriented bike in the Husky line, but it still doesn’t come with a spark arrester.

PROGRESS, PROGRESS
Have all the TPI issues been dealt with? Yes and no. The “glitches,” for lack of a better word, are virtually gone. In that first year, the bike would occasionally cut out, as if you hit the kill button. This would only happen when the motor was put under a sudden load. That doesn’t happen now, but once in a while the motor still seems to power down when it’s under stress, such as hill-climbing. This is probably related to overheating; the bike has a number of sensors that are designed for self-protection.
Some things haven’t changed. The power is still very linear, with much less hit than a carbureted bike. This is a good thing. It’s hard to fault the 300’s power delivery. It is absolutely flawless at low rpm. The 300 has always been virtually unstoppable down there, and the TPI version is only better. After that, there’s still a rapid surge of power, but you don’t get the kick in the pants that the carbureted version gave you. Some riders still swear that the TPI bike has less power, but there’s plenty of evidence to the contrary. It’s just so smooth that it might not feel as fast.
Another thing that hasn’t changed is the weight penalty that comes with TPI. When we tested the very first version, we established that it weighed about 6 pounds more with the addition of a fuel pump and various pieces of hardware. There’s no longer a carbureted electric-start version to compare with the TE300, but its weight is still very good for a two-stroke. On our scale, the TE weighs 235 pounds. That’s with no fuel in the tank but with oil in the oil tank. We’re not sure if that’s unfair or not. More issues for jury deliberation.
A much more interesting issue that comes with TPI is price. The TE300 sells for $10,099. That seems expensive for a two-stroke of any kind, but KTM and Husky have already been pushing their prices higher and higher, long before the coming of TPI. The 2018 TE300 with the carburetor was only $700 less. Most of the other Husky models have gone up by about $200 in that time. We’re not going to blame the high price on TPI as much as demand.

THE REST OF THE SHOW
Setting aside the question of fuel injection for now, we have to say that we love this motorcycle so much that we wouldn’t care if it ran on ground-up unicorn hearts. It does all the things that we love in an off-road motorcycle and does them better than almost anything else. Its specialty is the super-tight trail with rocks, mud and chaos trying to stop you in your tracks. The TE doesn’t stop. It doesn’t stall, and it’s always mellow and easy to control. You can keep the bike in second gear through almost anything. In some situations, you might have to abuse the clutch, but the TE can handle it. The pull is easy and it never fades. If you get stuck, the worst thing that will happen is a brief boil-over.  The suspension is soft, as it should be. In the past, the Xplor fork was too soft in virtually every application. For 2020, Husqvarna has stiffened it up a little, but it’s still a very plush motorcycle at low speeds. When you find yourself in big whoops in faster sections, it’s best to back it down a little. The bike doesn’t do anything wicked, but it clearly wasn’t meant for that. Husqvarna targeted this model for less aggressive riders.

BONUS POINTS
Aside from limited-edition models and cottage-industry makes, this is one of the most expensive two-strokes you can buy. Not surprisingly, all the parts are very high-end, from the levers to the bars to the tires. There are some omissions, though. We don’t know why this bike wouldn’t come with a radiator fan like the FE four-strokes. And, we’re bummed that the kickstarter has become a thing of the past. We’re sure Husky will be happy to sell you both items from their hard-parts catalog. The bike does come with a handlebar-mounted map switch as standard equipment, so you can toggle back and forth between map one and the less-aggressive map two. For the most part, everyone likes map one best.
If you’re among those people who are determined not to trust new tech, then feel free to search out a 2018 TE300. No one will argue with the fact that it’s a great motorcycle. For us, we’re fine with the new bike and the new technology. We like the increased range and the oil injection. Plus, we’re a little intrigued to see what the future brings. The day has already arrived when you can download a wide variety of upgrades. That world is only going to become bigger and broader. In the meantime, the 2020 TE300 is just as good as ever.