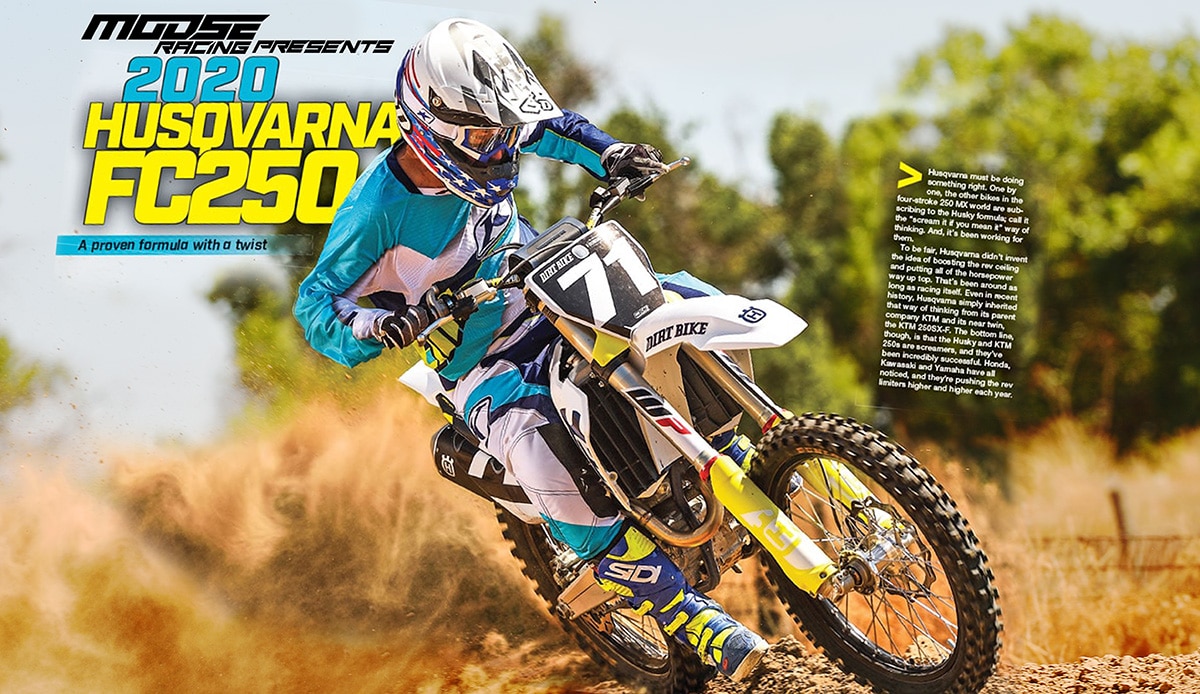 Husqvarna’s FC250  inherited the “Scream it if you mean it” way of thinking from its parent company KTM and the 250SX-F. The Husky and KTM 250s are both screamers, and they’ve been incredibly successful. Honda, Kawasaki and Yamaha have all noticed, and they’re pushing the rev limiters higher and higher each year. 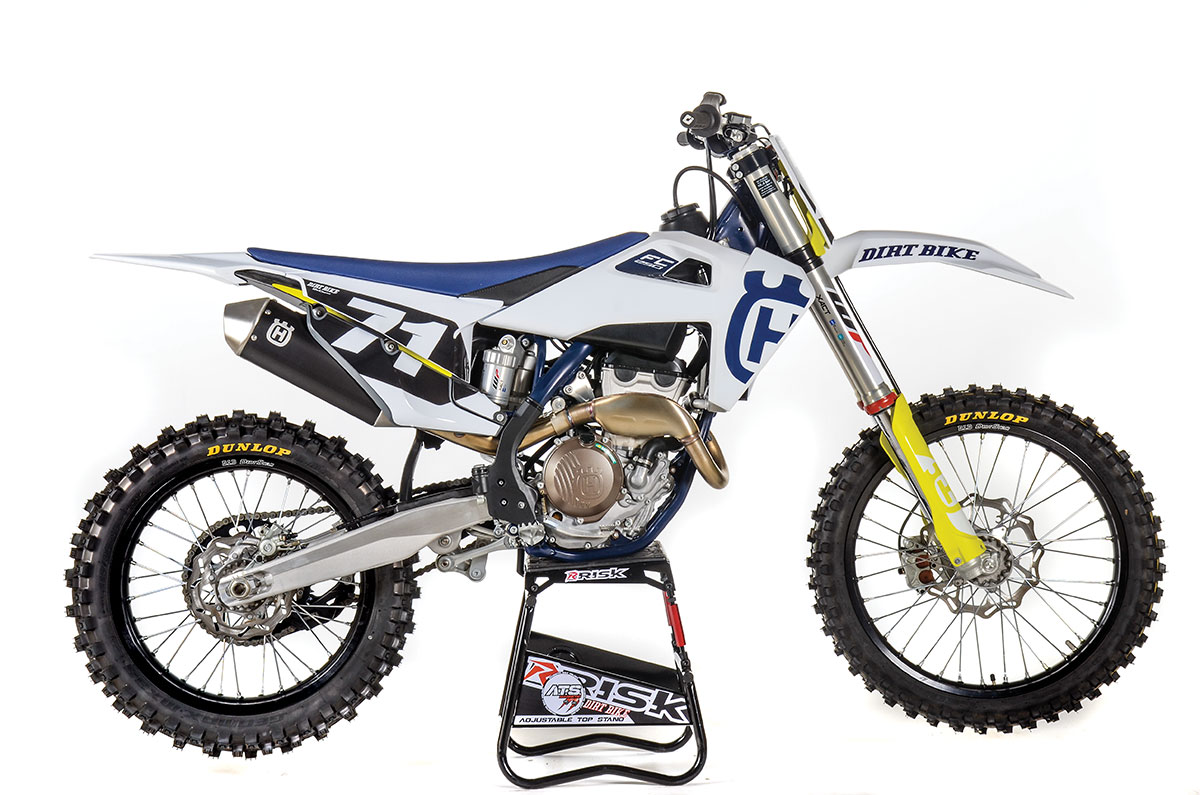 THE 2020 TWEAK
For 2020 Husqvarna hasn’t made many mechanical changes to the FC250. It remains a double-overhead-cam, electric-start four-stroke with a valve train that uses finger-followers between the cams and the valves. The followers were first introduced to the dirt bike world by the KTM 250SX-F a number of years ago, and it’s part of the rpm philosophy that other manufacturers are adopting. They allow a mechanical advantage so that a smaller cam lobe can create more lift without putting as much stress on the camshaft or the buckets, and both Honda and Kawasaki now use the same design.

As always, critics of the FC250 accuse it of being a KTM with different plastic. There’s certainly some truth there. As most people know, back in 2013, Husqvarna was acquired by Stefan Pierer, who also owns 51 percent of KTM. He quickly moved manufacturing to Austria with the specific intent of sharing as many parts as possible between the two makes. Since then, Husqvarna has incrementally been developing its own personality through different marketing, different race teams and different dealer networks. As far as the product itself, there have always been more differences than most people think. Just as in the past, the 2020 Husqvarna FC250 has Magura clutch hydraulics, a Pro Taper handlebar and D.I.D rims, whereas KTM uses other vendors. The FC also has a composite airbox, a different seat, different bodywork and a different silencer. This year the bike’s suspension has different valving as well. That’s a sign that Husqvarna has its own testing staff here in the U.S., and they have arrived at their own conclusions. The fork is still a WP air fork, but it’s now called the Xact 48. The recommended pressure is a tick higher than last year’s at 10.4 bar (151 psi), but the valving is initially softer.

Another interesting tidbit for 2020 is the fact that the bike comes with an additional airbox cover. The one on the bike is exactly like the 2019 version, but the extra has slots to allow more air into the motor. One of the consequences of having that composite airbox is that the Husky’s motor has a slightly different personality compared to the KTM’s. Some like it better, some don’t. A few riders went a little crazy drilling holes in the cover in hopes of gaining power. Now they won’t have to. As a side note, the new KTM also comes with a vented airbox cover of its own.

STILL SCREAMIN’
With or without the vented airbox cover, the Husqvarna FC250 is still a screamer. To get the most out of this bike, you hold it open until it goes supersonic, then hold it open a little longer. That used to be an unusual trait in the 250 class; now it’s par for the course. The Husky still feels a bit mediocre down low, meaning below 10,000 rpm, then goes a little nuts all the way to 14,000 rpm. It’s no longer fair to say the Husky has weak low-end power. According to the dyno results from last year’s 250 MX shootout, the FC250 is right in the hunt in terms of torque, simply because the other 250s have lost power down there in their attempt to be more like the Husky and KTM. Still, the FC250 gives its rider the feeling that he should never let the revs sink too far. The bike doesn’t like half throttle.

The airbox cover clearly adds a little power across the board. It isn’t a massive increase, but there doesn’t seem to be any drawback; it gains a little bit at the very bottom and a little bit way up on top. It isn’t even much noisier, although if it starts raining, you should have the standard cover handy.

As always, the Husky has a multi-function switch on the left side of the handlebar that allows you to change from map one (allegedly the mild map) to map two. The switch also allows traction control and launch assist. We were hoping that Husqvarna engineers would have developed a bigger variation between map one and map two, but the maps are still very similar. Map two delays peak power by a tiny amount, although we still wouldn’t really call it a more aggressive delivery. Same thing goes for traction control. It makes a noticeable difference, but it’s not a decisive advantage or disadvantage, regardless of how slippery conditions are. Launch control makes a very big difference, but we wouldn’t recommend using it in actual competition without first practicing—over and over. 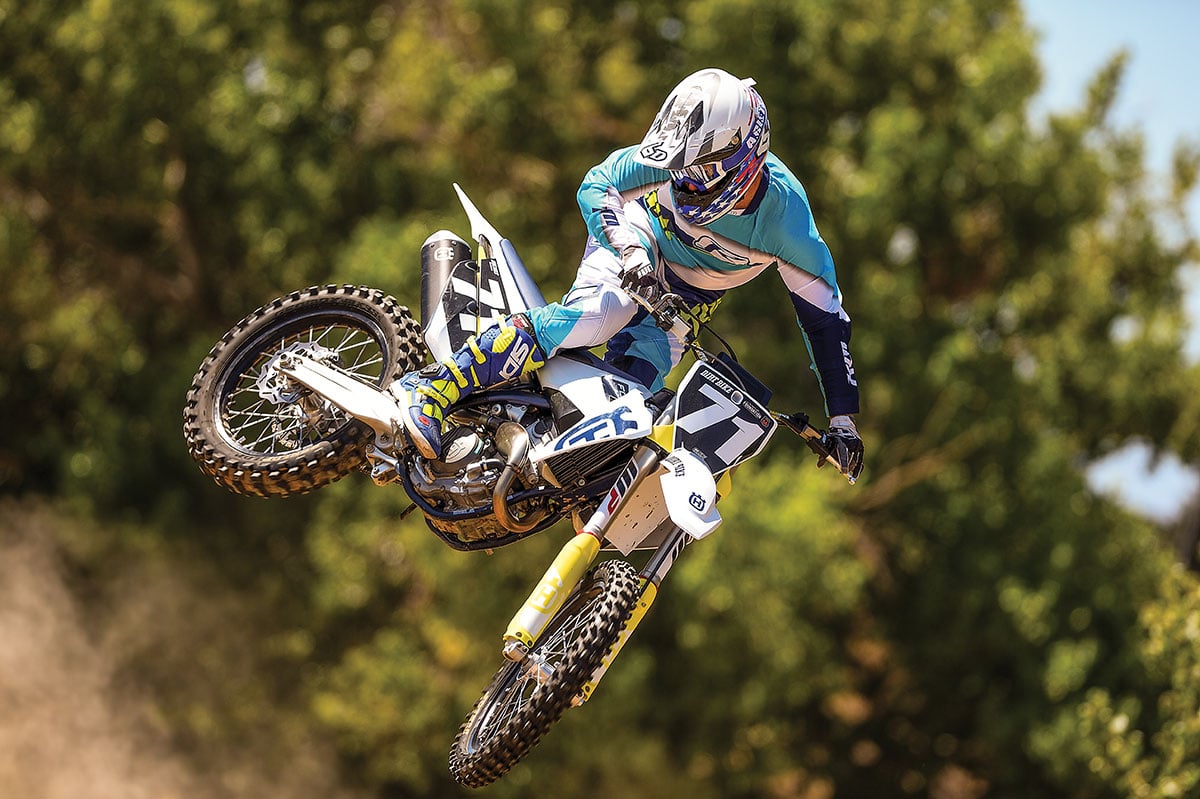 FIGHTING WEIGHT
When it comes to handling, the Husky’s light weight is clearly its biggest asset. It weighs 219 pounds without fuel, so it’s lighter than anything in the class aside from the KTM, which might or might not be a 1/2-pound lighter, depending on round-off error. The new Kawasaki, which still has no electric start, is close at least, but the other 250s are far heavier. The Husky feels light and easy to manhandle. It’s also very narrow, and that adds up to a bike that turns well. This year the slight changes in suspension are welcome. The WP fork is the survivor of the air-fork era because it was the fittest. The air chamber is contained in the right fork leg only, so there’s only one Schrader valve to check, and it takes a very long time before it loses any pressure. The criticism that air forks require so much more maintenance simply isn’t valid with the WP system. Riders can and do, however, complain that it doesn’t perform quite as well as the best of the coil-spring forks. That’s true, but only if the coil springs are the right ones for your weight and riding style. This year the WP fork feels a little cushier in the initial part of the travel. Then it firms up quickly. The ride quality is improved without the drawbacks of more dive or bottoming.

In the rear, the Husky is excellent. It was last year, and none of the changes are drastic enough to threaten that. We preferred the balance of the bike with 105mm of sag in the rear and the stock air pressure in front for most tracks. If you are outside the target rider weight, say 150 to 175 pounds, you can still make the stock 42 N/m rear spring work, but you’ll have to adjust the air pressure and/or the fork height to keep the bike balanced. If heavier riders find that the shock is topped out before they sit on the bike, it’s time for a stiffer spring.

THE MAIN QUESTION
The Husqvarna FC250 is one of the most expensive bikes in the class. Can it justify that? It depends on who you are and what you value. The quality is outstanding. The Magura hydraulic clutch is excellent, and so are the Brembo brakes and all the components. It’s easy to see why the Husky costs so much—$100 more than the KTM and $1300 more than the Kawasaki. The real question is: “Do other bikes offer more for the money?” At this point in the 2020 season, all we can say is that the FC250 will be among the very fastest, the very lightest and the very best-handling bikes in the 250 four-stroke world. It’s hard to go wrong when you have all that in your corner.