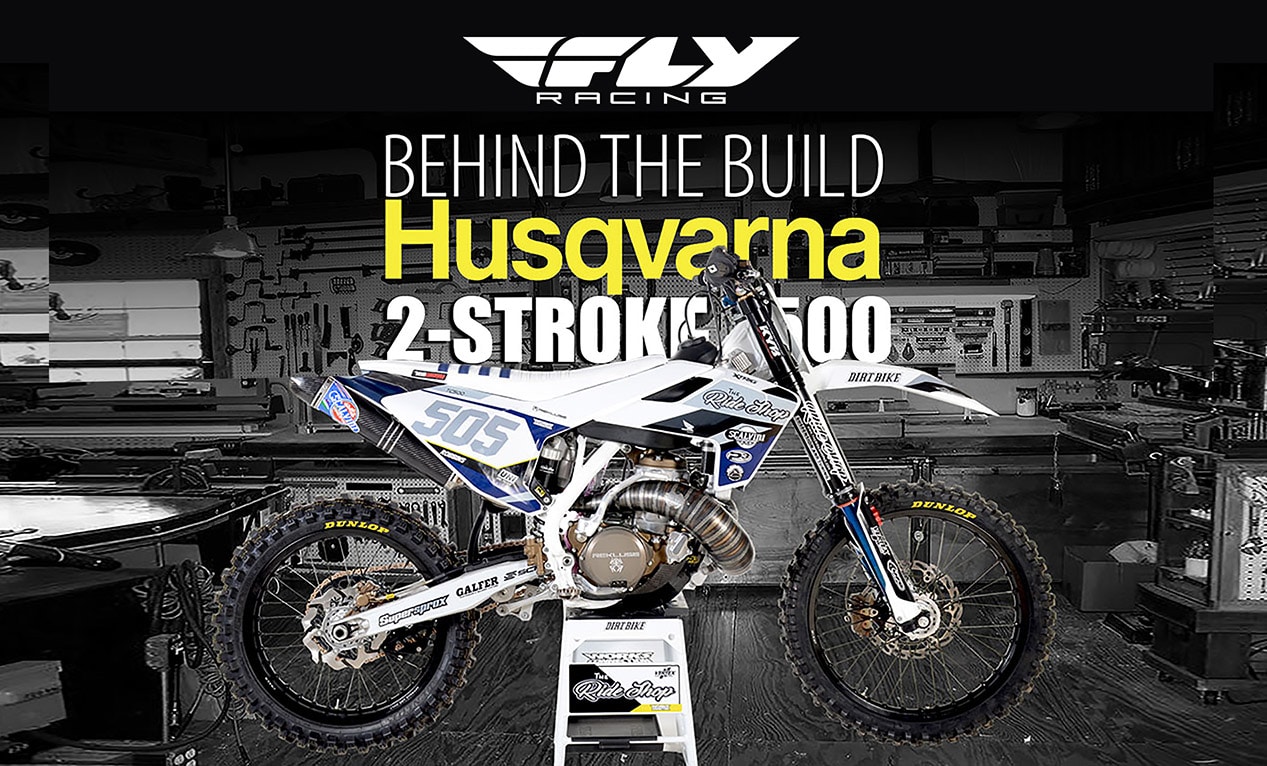 There have been plenty of 500cc two-strokes from Husqvarna throughout dirt bike history. But, since the brand’s rebirth a few years back, it has shied away from two-strokes above 300cc. We teamed up with former factory Kawasaki race team mechanic Jonny Weisman, who now owns The Ride Shop in Arizona, to build a modern Husqvarna TC500CR two-stroke of our own.

Some builds go from concept to completion very quickly without any issues at all. This was not one such project! This build was a long, slow grind with tons of fabrication on just about every aspect of the build. After all, a 2001 Honda CR500 engine doesn’t just drop right into a new-generation Husqvarna FC450 chassis. If it did, we would see them all over the place. Like we just mentioned, the chassis started off as an FC450, but it wasn’t bought all at one time. First, the main steel frame was purchased on eBay, and the entire lower engine cradle was removed. A new cradle was fabricated by Weisman that would later house the new 500cc Honda powerplant.

Surprisingly, once the main frame was modified, everything else was kind of straightforward on the chassis. The FC450 four-stroke air boot was removed and replaced with a unit off a TC300 two-stroke, but it didn’t just bolt right in place. Heat was applied, and the rubber was massaged into the correct form. Besides drilling some vent holes on the air-filter cover, the FC450 airbox was left unchanged.

With all the major cutting, welding and sculpting done, Weisman focused his attention on some of the finer details relating to the chassis. The stock Brembo braking master cylinders and calipers got a brown Cerakote finish. A Fasst Company rear-brake spring system was also added, replacing the OEM Husqvarna system that always seems to break. We also used Fasst Co. Flexx handlebars in hopes of reducing overall vibration, and added impact absorption is never a bad thing in our book.

The FC450 comes off the assembly line with an air fork setup from WP. This system is probably the best air fork design we have tested, but since this is one of those over-the-top projects, the decision was made to covert it over to a spring system. Sounds simple, right? Weisman is one of the first people to do this a few years back, and now it’s commonly referred to as the KYB conversion kit. In very simple terms, all the WP internals are removed, some minor modifications are performed on the remaining parts, and Kayaba spring internals are put back in. Yes, it’s a lot more complicated than that, but that’s the bottom line. While the suspension was apart, it received coatings just about everywhere. Yes, this gives it a cool look, but also reduces friction, allowing the parts to move freely and improved performance. Other bolt-on items added to the chassis include a GPR Version-4 stabilizer system, Seat Concepts custom gripper seat and an SRT complete wheelset wrapped in Dunlop MX33 tires.

Usually, when we get to this point on a two-stroke conversion build, it’s time to bolt in the engine, fire it up and go riding. Not the case on this build. There is almost more to talk about in regards to the powerplant of our TC500CR than the rest of the bike. This particular CR500 engine began life in 2001, and since then it has undergone a Terminator-type evolution that would make Arnold Schwarzenegger proud.

OEM Honda center cases are almost impossible to find, and if you do locate some, the price might stop your heart. Our TC500CR has center cases CNC-machined from solid billet aluminum by Built and designed to use all OEM Honda internals throughout. As you can imagine, they aren’t inexpensive and have a price tag of around $1,700 per set. The billet components don’t stop there. The ignition cover is also CNC-machined out of billet aluminum and doubles as a electric-starter mount. Panthera Motorsports out of Canada makes an entire system for the CR500 that includes starter motor, billet aluminum ignition cover/mount, billet flywheel, steel flywheel holder, stator, one-way bearing, stator backing plate, main ring gear, crown gear, intermediate gear, general bearing, gaskets, bolting insert, rectifier, starter relay and all the wiring required. Yes, it’s a long list and retails for around $2000. The outer carbon fiber cover was done by Weisman.

Internally, the entire transmission was gone through with deburring, polishing and tumbling everything, and the special treatment didn’t stop there! Oh, we almost forgot to mention the complete Rekluse Core Manual clutch with TorqDrive technology replaced the stock unit as well. Crank Works balanced, trued and installed their stroker rod. We also went 1 1/2mm bigger on the bore, so total cc on our engine is about 510. A Boyesen Rad Valve was heavily modified for fitment, Cerakoted to match the inner clutch cover and a 38mm Air Striker Keihin was attached to feed our TC500CR fuel. The last piece to the fabrication puzzle to the engine itself was a compression release built into the stock Honda head. It doesn’t get any cooler than a cone pipe on a two-stroke, and the Scalvini unit built for the Honda CR500 is a true cone pipe. There was some moving around of a mounting bracket or two, but other than that, the Scalvini exhaust bolted right on.

What would a big-bore 500+cc modern-day Husqvarna two-stroke look and run like? If it was like our TC500CR project, we guarantee they would have no problem selling every one produced. From start to finish this project took Jonny Weisman at The Ride Shop just over two years to complete, spending what some would consider a small fortune. The finished product is impressive on paper, but to really appreciate his work, you have to see it in person. Here at the magazine we love these types of builds because it takes vision, skill and creativity to make it happen. Sometimes they are all show and no go, and that’s kind of a bummer. The TC500CR is show with go that will make just about any big-bore two-stroke lover smile. It has tons of bottom-end grunt and loves to be short-shifted. Starting is a breeze, as you can imagine, and even kick-starting the TC500CR is fairly easy. We wouldn’t do it without a boot on that’s for sure.

Once comfortable with the power delivery of the TC500CR, Weisman dialed in the suspension with the race sag in the rear set around 105mm, and up front the fork at 5mm in the clamps. Each test rider liked different clicker settings depending on their speed, but in general they liked the overall plush, comfortable feel the setup provided. Cone pipe, carbon fiber, coatings galore, bolt-on bling and a fire-breathing powerplant, this project has just about everything a die-hard two-stroke enthusiast could ask for! The only question we have is, “How do we top this one?”