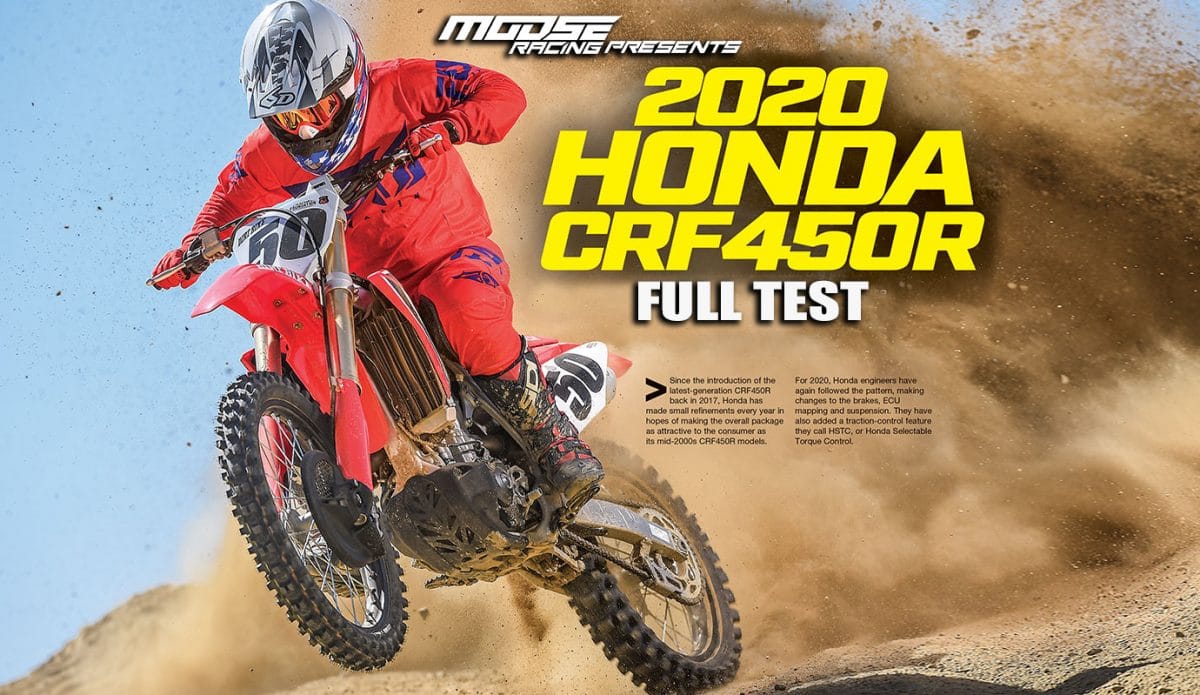 Since the introduction of the latest-generation CRF450R back in 2017, Honda has made small refinements every year in hopes of making the overall package as attractive to the consumer as its mid-2000s CRF450R models. For 2020, Honda engineers have again followed the pattern, making changes to the brakes, ECU mapping and suspension. They have also added a traction-control feature they call HSTC, or Honda Selectable Torque Control. 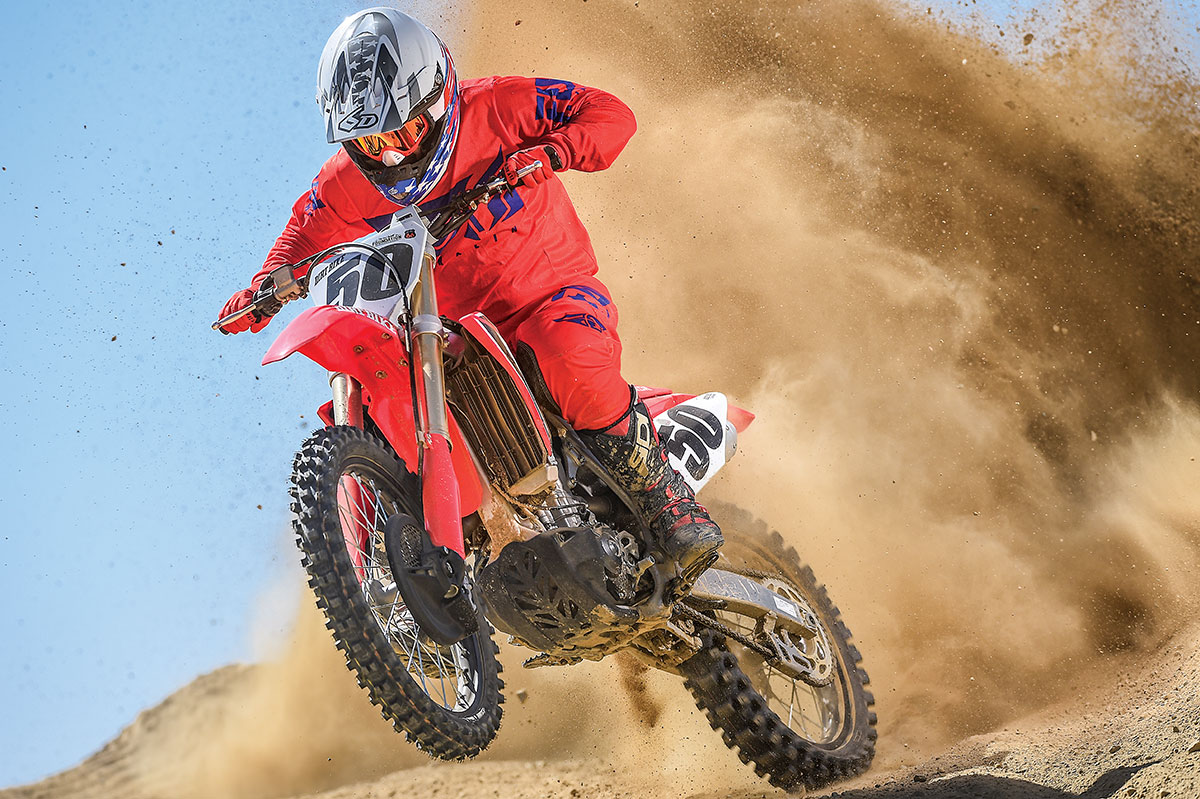 Since the introduction of the latest-generation CRF450R back in 2017, Honda has made small refinements every year in hopes of making the overall package as attractive to the consumer as its mid-2000s CRF450R models. For 2020, Honda engineers have again followed the pattern, making changes to the brakes, ECU mapping and suspension. They have also added a traction-control feature they call HSTC, or Honda Selectable Torque Control.

THE GOODS
Last year Honda made some big changes to the engine with new cases that eliminated the kick-starter capabilities altogether. The engineers also gave the engine more oil capacity. During long-term testing, it was evident that the engine parts and clutch components lasted longer with the increased oil levels on the 2018 model, so Honda incorporated this into the 2019 version, along with a revamped oil-management system.
The combustion chamber and head were changed with specific updates around the exhaust port. Honda was stuck with the single-overhead-cam layout they call the Unicam design and added finger-followers on the intake valves. Traditional rocker arms are used to operate the exhaust valves. The exhaust head pipe was also changed to match the engine updates with the dual-muffler design still in use. 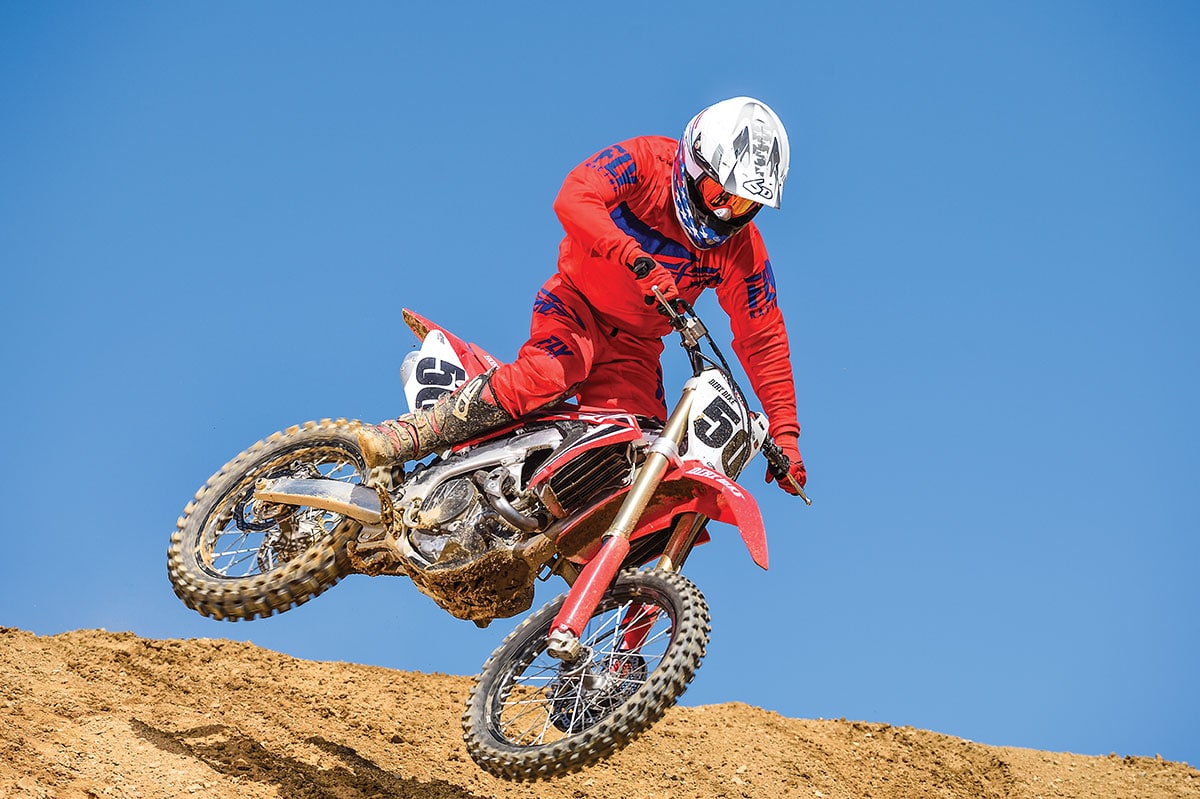 The big news in the power department for 2020 comes from updated ECU settings designed to give the machine more usable power throughout the entire power curve. In the past, the CRF450R had huge amounts of power, but it was all concentrated in the bottom and midrange, disappearing rapidly up top.

The interesting thing about all these different on-the-fly-activated electronics systems is that they all work together and can be changed independently from each other. So, technically, there are 27 different configurations that can be used straight off the showroom floor! Oh, and don’t forget the Honda CRF450R has a gear sensor, which allows the engineers to tune the power delivery for each gear. Those power delivery points were updated for 2019 as well. Now that’s adjustability.
Chassis-wise, Honda introduced a brand-new frame and swingarm configuration in 2019. For 2020 it returns with the same setup, but Honda made some very specific changes to other parts of the chassis. The battery tray has been lowered 28mm to move the center of gravity downward for more overall balance and improved handling. The fork is still a Showa coil-spring unit, and the shock still has the same design as in 2019.

Changes to the Showa fork and shock were made for 2020, with new valving on both ends to improve front-to-rear balance and mitigate the nervous handling traits at higher speeds. Stopping power was upgraded with an all-new brake pad material and elimination of the rear rotor guard altogether to improve heat dissipation.
Along with the updates Honda made last year, the engineers also increased the front-caliper piston size and made the hose stiffer to improve performance. Items returning for 2020 that make us smile include black D.I.D Dirt Star rims, Dunlop MX3S tires, Renthal fat bars, multiple handlebar mounting positions on the top triple clamp and a plastic skid plate that offers good protection.

THE SHAKEDOWN
Honda faithful will not be disappointed with the 2020 CRF450R model, and there is one very specific reason—it’s a Honda! The engineers didn’t try to reinvent the wheel here; they made some improvements but didn’t go too far. As a matter of fact, we wouldn’t mind them taking a couple more steps down the road they are on. We didn’t think it was possible, but the 2020 model is faster than the 2019 model and could possibly be the fastest, most powerful CRF450R that Honda has ever released to the public for sale. 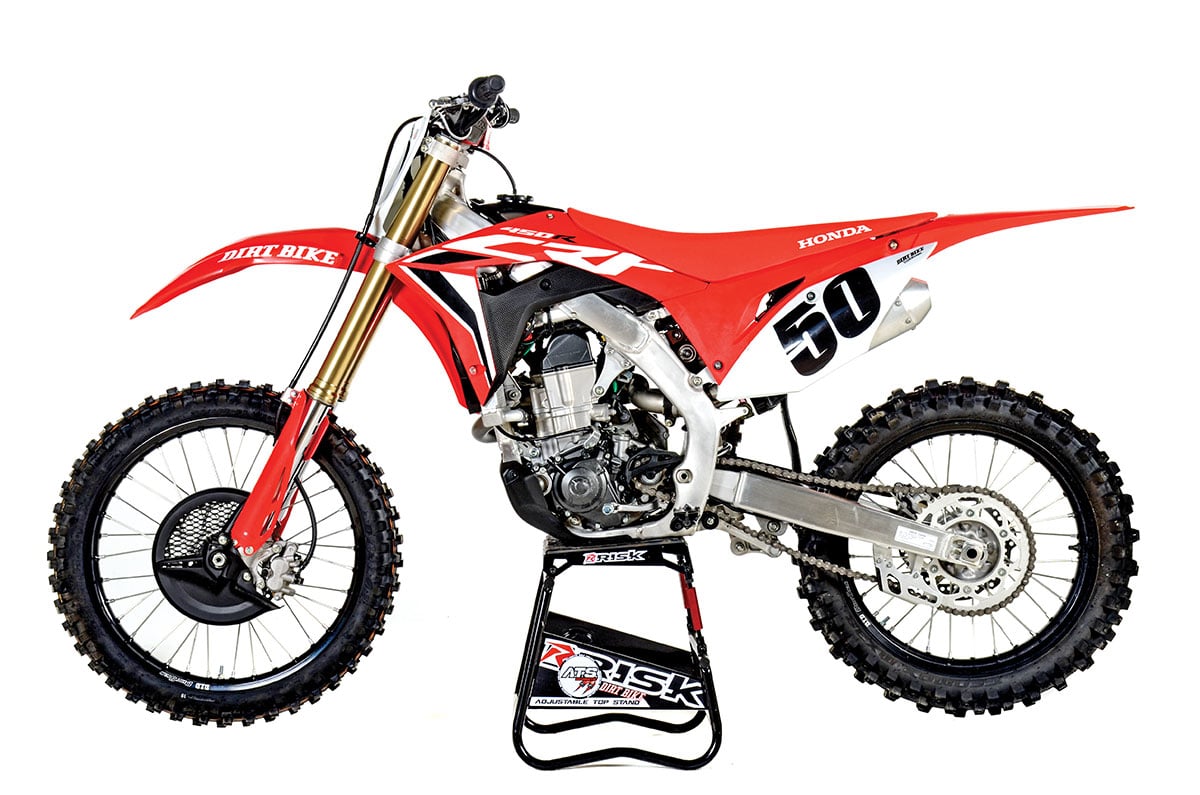 The main difference is that the power is usable from bottom to top with smooth under-tones. If you want to go faster, just twist the throttle. If that’s not fast enough, spur it with some clutch and it comes to life almost immediately. The new ECU mapping really brings this machine to life. Most test riders felt the standard map worked best for all-around power. The aggressive map brings the power lower in the curve with a slightly harder hit and signs off earlier on top, while the traction (or less aggressive) map takes all the lively power away, giving the bike a heavier feel. 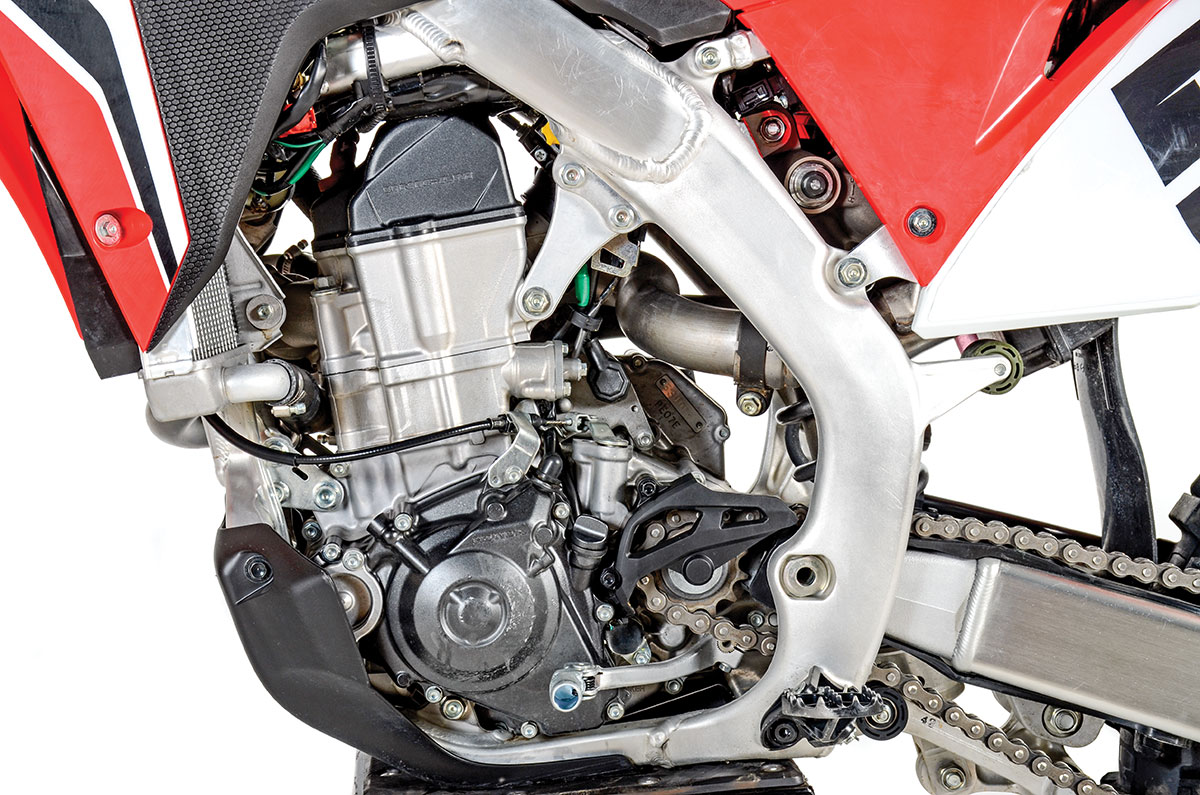 The clutch is one area of the engine that we wish Honda would address, and we have been very vocal about this since 2009. It still has a vague feel at the lever, fades with moderate to heavy use and has a stout pull compared to the other bikes in its class. Since Honda revamped the CRF450R a few years back, it seems to run on the hot side. We boiled over our 2020 test machine more often than previous models. This may have something to do with our clutch-fade issue as well. Handling is definitely improved, especially cornering and transition from one side to the other while changing directions. Front-end traction has been improved, giving the rider more confidence to steer the bike through ruts and flat corners.
At higher speeds, the bike tends to get a little busy like before, but it is still an improvement from 2019. We will be the first to admit the 27 different electronic-setting possibilities are intimidating at first, but once we got a handle on what each one did individually and how to physically change the settings, it was easier to wrap our minds around it all. Overall, the 2020 Honda CRF450R is a more rider-friendly package than previous models and possibly the best standard CRF450R model that has rolled off the assembly line in the last decade.