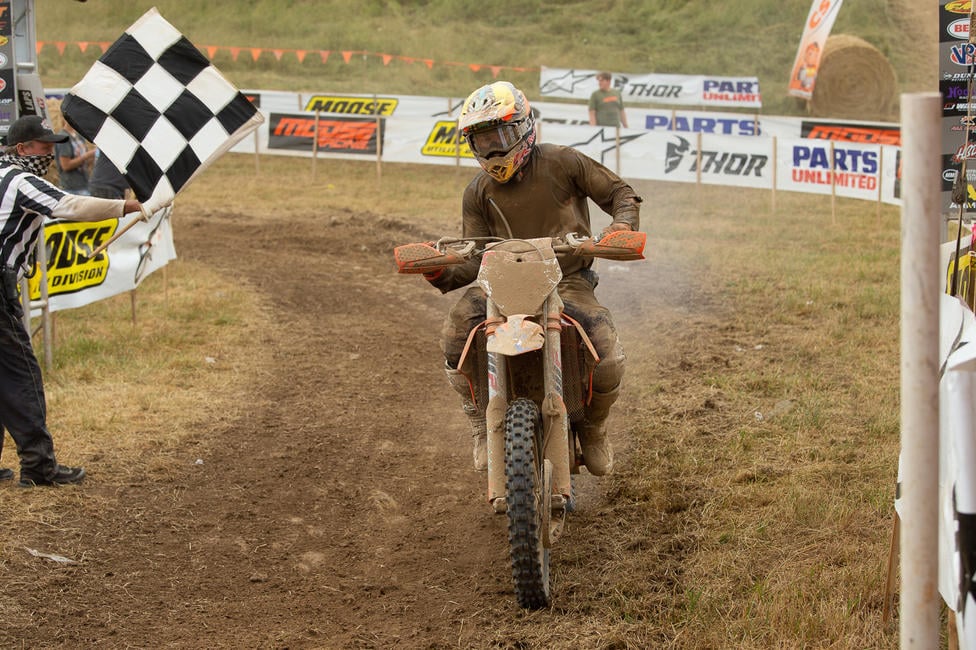 GNCC Racing is some of the most exciting off-road racing in to watch in the world ! The afternoon pro event is three hours of intense racing action and the overall win was decided on the final mile of the final lap between Red Bull/ KTM teammates Josh Toth and Kailub Russell.  Below is the High Voltage Race Report:

When they green flag waved it was FMF/KTM Factory Racing’s Josh Toth getting a great jump off the line to earn the $250 All Balls Racing XC1 Holeshot Award. As the riders navigated their way through the course on the opening lap, it would be Toth holding onto the lead as he came through timing and scoring 32 seconds ahead of his fellow competitors. RPM KTM/Klim’s Dante Oliveira held onto second early in the race, with FMF/KTM Factory Racing’s Kailub Russell charging back in third overall.

By the second lap, Russell had made the move around Oliveira and had his sights set on his teammate Toth. Toth, however, would remain in the lead with almost a 40 second lead as he continued to have a pretty open trail ahead of him. Babbitt’s Online/Monster Energy/Kawasaki’s Josh Strang had made his way to third by the second lap, making the pass stick on Oliveira.

When the lead pack came around on lap three, Toth’s lead had diminished to 22 seconds over Russell. Toth continued to push, and Russell continued to reel in his teammate. Strang would remain back in third, with FMF/KTM Factory Racing’s Ben Kelley charging ahead in the fourth place position. Lap four saw Russell continuing to inch closer to Toth with a 12 second gap between the two. Strang and Kelley would continue to push, with Babbitt’s Online/Monster Energy/Kawasaki’s Jordan Ashburn making his way into the fifth overall position.

Things were heating up by the competition of the fifth lap, with just an 8 second gap between Toth and Russell the battle was on as they headed through the pro pits and back into the woods. Kelley had moved within two seconds of Strang to battle for the third place position and Ashburn remained fifth with FactoryONE Sherco’s Grant Baylor running in the sixth place position. However, as Baylor headed back out he would be unable to finish another lap due to a mechanical issue. Baylor would ultimately finish 10th in the XC1 class.

When the leaders emerged out of the woods and began their descent to the finish line to complete lap six of racing, and receive the white flag, there was new leader, Russell had made his way around Toth and came through timing and scoring 3.45 seconds of him. Strang would remain in the third place position, but would still have his work cut out for him as Kelley was still just 2.5 seconds behind him. Ashburn continued to make his way in the fifth place position, and Phoenix Honda Racing’s Andrew DeLong was running sixth in the XC1 class. Unfortunately disaster would strike DeLong once again, and a mechanical failure would  take him out of the last lap. DeLong would finish the day eighth in the XC1 class.

Husqvarna/FXR/Thornhill Automotive’s Cory Buttrick and Rockstar Energy Husqvarna Factory Racing’s Zach Osborne were battling their way through the dust and riders, making their way around in the eighth and ninth place position on lap six. With one more lap of racing to go Buttrick and Osborne both continued to push to better their finishing positions.

With everyone’s eyes on the lead pack during the last lap of racing, Russell and Toth were bar-to-bar. Toth made the pass on Russell, but would get caught up trying to pass a lapper. This left a main line open for Russell, and he would capitalize making the pass back for the lead with less than a mile to go. With the checkered flag waving it was Russell coming through to earn his 67th career XC1 victory. Toth would finish second, just three seconds back from Russell. Strang would hold off Kelley to take third overall, but Kelley would hold onto fourth overall for the day.

Ashburn came through to take the fifth overall position at round eight. Buttrick would come through to finish sixth in the XC1 Open Pro class, and 14th overall on the day. And after a tough day of battling back from a bad start, it was Osborne finishing seven laps of racing. Osborne would come through seventh in the XC1 class and 29th overall. Osborne said it was not the result he hoped for, or thought he was capable of, but he hopes to return for some redemption at some point.

In the XC2 250 Pro class it was Trail Jesters KTM’s Jesse Ansley grabbing the $100 Hot Cams XC2 Holeshot Award. However, it would be Trail Jesters KTM’s Jonathan Girroir making his way to the front of the group early on in the race. Girroir would come through timing and scoring on lap one in the second place position behind Pennsylvania-native Benjamin Nelko, who held the lead on the opening lap.

Girroir would make the pass stick on lap two, and he would not look back. Girroir would maintain the lead, even after Rockstar Energy Husqvarna Factory Racing’s Craig DeLong applied the pressure halfway through the race. Girroir and DeLong would push each other until the checkered flag waved. Girroir earning his third win of the season, and moving himself back into second place in the points standings.

DeLong would cross the line in the second place position, making his eighth-straight visit to the podium. DeLong remains the XC2 250 Pro class points leader as the series goes on hiatus until September.

AmPro Yamaha’s Michael Witkowski worked his way up to third after a fifth place start to the day. Witkowski would make the pass during the third lap of racing, and put his head down to push for the remainder the of race. Witkowski sits third in the points standings, just three behind second place and 12 behind first.

Coming through to take fourth in the XC2 class was Beta USA’s Thorn Devlin. This is Devlin’s best finish thus far in the season, breaking into the top 10 overall with a ninth place overall finish on the day. Rounding out the top five in XC2 was Phoenix Honda Racing’s Jonathan Johnson.

Bringing home his first FMF XC3 125 Pro-Am class win of the season was Husqvarna/FXR/Enduro Engineering’s Jake Froman. After starting back in the sixth place position, Froman would put his head down and push towards the front. As the white flag flew Froman found himself sitting second and within striking distance. When the riders emerged from the woods, Froman would hold the lead and take the checkered flag first in the FMF XC3 class.

Moose Racing/Carolina KTM/XC Gear’s Zack Hayes made his way to the front of the class early on in the race, and would hold the lead as the white flag flew. During the last lap Hayes would battle with Froman, but would be unable to hold him off. Froman would make the pass, and Hayes would hold onto second place in the class. Hayes currently holds the points lead in the FMF XC3 class after eight rounds of racing.

Holding onto third in the FMF XC3 class was Canyon Motorsports/FXR/JDP Suspension’s Michael Delosa. Delosa would battle throughout the day, falling back to fourth for a period of time. However, he would make the move back into third and hold that position for the majority of the race.

In the 10 a.m. race it was WXC competitor, AmPro Yamaha’s Rachael Archer coming through to take her first-ever overall and WXC class win by 59 seconds. Archer jumped out to the early lead, and begin to place a gap over the rest of the field early on. Archer is currently ranked third in the WXC points standings.

BABS Racing Yamaha’s Becca Sheets battled her way to second overall and in the WXC class. Sheets would continue to push throughout the race, but would ultimately be unable to catch Archer for the lead. Sheets remains in the points lead after eight rounds of racing. Rockstar Energy/LanMills XC’s Tayla Jones worked her way from a mid-pack start up to third overall by the time the checkered flag flew.

Team Green Kawasaki’s Grant Davis battled with Coastal Racing’s Lane Whitmer throughout the 8 a.m. youth race on Sunday. Davis would come through to take the lead, and earn his sixth YXC1 Super Mini Sr. class win and youth overall win of the 2020 season. Whitmer held onto second overall, and remains fourth in the YXC1 points standings. Racing his way to third overall in the youth race was YXC2 Super Mini Jr. competitor, Nicholas Defeo. Defeo would earn the YXC2 class win, his second of the season, and heads into summer break just three points behind the class leader in points.

Noah Cooper would battle his way to third in the YXC1 class, rounding out the class podium. Andrew Segars and Logan Pellegrini came through to round out the final two YXC2 podium finishing positions at the High Voltage GNCC.

The 2020 High Voltage AMSOIL Moto Hero award was presented to Scott Dowlin. Scott has raced in both the ATV and motorcycle sides of GNCC Racing. This year Scott is focused on the motorcycle side, and has been racing in Super Vet C (35+) class. Scott has been a State Trooper for 14 years. He started out in Chambersburg, Pennsylvania for three years, and then transferred to Troop B in Uniontown, Pennsylvania for three more years. Today, and for the past eight years, Scott is in Troop B in Washington, Pennsylvania. He is a Field Training Officer and has been for 12 years, he trains new troopers in shield training, and he is a Federal Motor Carrier Safety Inspector. He also is a negotiator for the Special Emergency Response Team. Scott was also awarded a free set of Kanati Lite truck tires from GBC Tires, a $250 AMSOIL shopping spree and a commemorative American Flag courtesy of Columbia Flag and Sign company and a $200 Gift Certificate for their store.