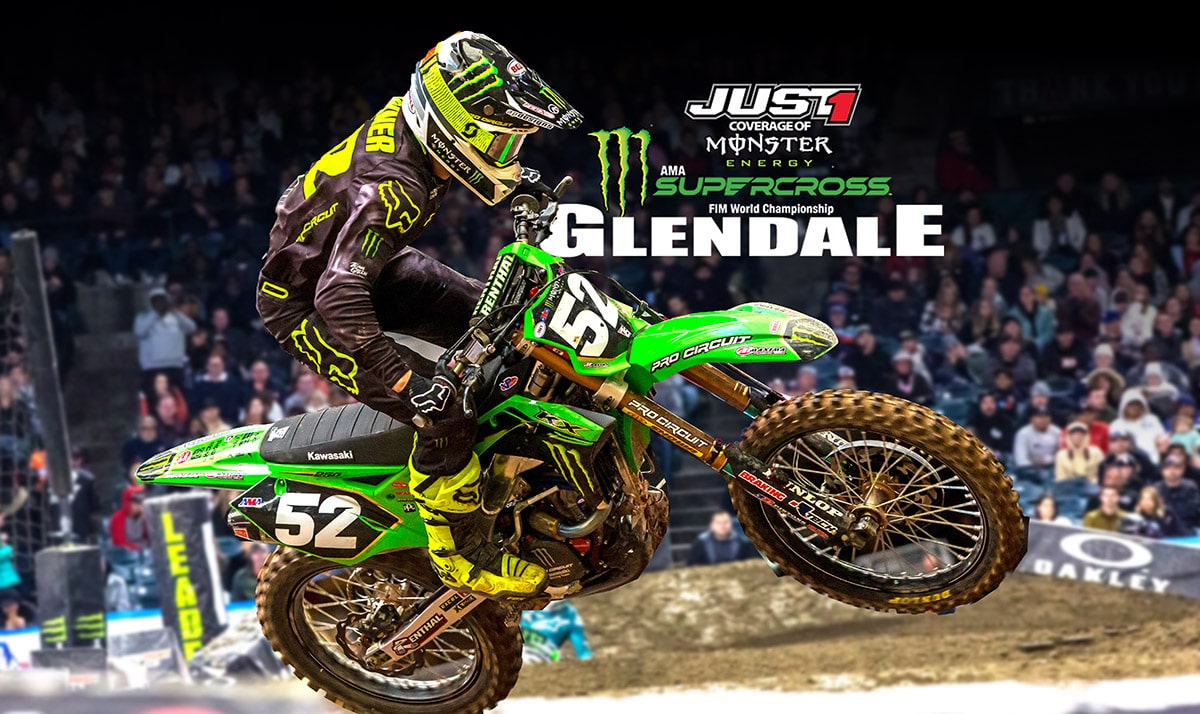 The Phoenix round of Monster Energy Supercross provided dramatic changes in fortune in the 250 West series, which served to tighten up the title chase. Point leader Justin Cooper suffered though a litany of minor crashes in the first two main events of the Triple Crown format, but rebounded to win the final race and retain his Red Plate by a scant three points.  Austin Forkner and Dylan Ferrandis continued doing what they do; in Forkner’s case, that included getting good starts in the first two races and doing damage control in the third. For Ferrandis, it meant coming through the pack again and again, coming out in second every time. For extended coverage of the Glendale Supercross, click here.

Christian Craig and Austin Forkner bumped in the first turn with Forkner coming out better and Craig running off the track. Within a few turns, Forkner passed Jacob Hayes for the lead and then Alex Martin and Michael Mosiman followed suit. Dylan Ferrandis was in fourth, but his teammate and points leader Justin Cooper when down at the end of the  first lap. It was almost a lap before he got going again. Mosiman passed Martin on the second lap with Craig coming all the way up to fifth. Ferrandis also got around Martin and stared closing on Mosiman. By the half way point, Ferrandis and Craig were third and fourth and the crowd clearly wanted a rematch from last week. As the race wound down, Ferrandis opened a little gap and then passed Mosiman. At the beginning of the final lap, Craig also got past Mosiman, but he was too far back to challenge Ferrandis or Forkner, who eventually finished with a four-second lead. Justin Cooper was 17th, starting the night in a deep hole.

Justin Cooper came from a terrible gate pick to pull the holeshot. Derek  Drake was second with Mosiman and Forkner behind. Ferrandis got bumped around on the first lap and ended up in 10th  just behind Craig. It was the start of the third lap when Cooper’s comeback fell apart. He went down and handed the lead to Drake. Shortly after that, Craig fell and pulled into the pits. All this helped Ferrandis move up to sixth. Drake continued to lead, riding smooth and fast, but Forkner was closing in. Midway through the race, Drake was still in front, Ferrandis was fourth pushing Mosiman, and Jacob Hayes was fifth. Ferrandis passed Mosiman briefly, then gave it back. With about four laps to go, Forkner moved past Drake into the lead and Ferrandis finally made it past Mosiman for good. Two laps later, Ferrandis also passed Drake and set out after Forkner, but that would be a tall order. Forkner went on to win his second Main of the night with Ferrandis three seconds behind and Drake in third. Cooper was ninth.

At the start of the final Main, Justin Cooper passed Martin Costello quickly for the lead and tried to get away while Forkner and Ferrandis battled for fourth.  Brandon Hartranft was a solid second for several laps. It took a while, but Ferrandis eventually moved into second. Forkner couldn’t seem to find the groove that he had in the first two races but finally moved into third. In the meantime, Mosiman was coming through the pack after a poor start. When he got into sixth, that was all he needed for the podium in the final tally. By the last lap, Cooper’s lead had shrunk slightly over Ferrandis, but the two of them were two turns ahead of Forkner. That was still enough to give him the overall win with a 1-1-3 over Ferrandis’s 2-2-2. Cooper’s spectacular final race couldn’t make up for his first two finishes, and he would get a ninth place overall, which was barely enough to retain his red plate.