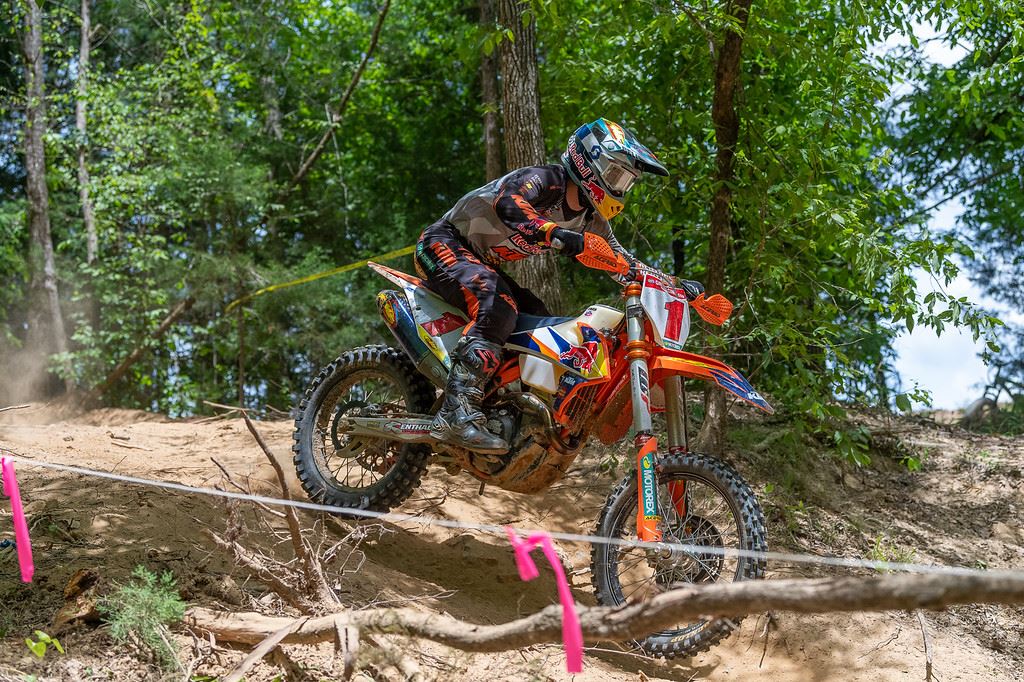 The return to normal has started ! GNCC racing is back and the race racing action in Georgia was on fire just like the temperature. A couple top contenders such as Thad Duval and Steward Baylor were not on the starting line for various reasons. Duval due to injury and Baylor parted ways with Sherco during the break in racing but the remaining riders were all in attendance.

As the green flag waved it was FMF/KTM Factory Racing’s Kailub Russell jumping out to grab the $250 All Balls Racing XC1 Holeshot. K. Russell headed into the woods first, and didn’t look back. As the race wore on, K. Russell maintained the lead throughout the duration of the race. K. Russell would face a last lap battle with Coastal Racing Husqvarna’s Ricky Russell, however, after a crash in the woods R. Russell would be unable to finish the race. K. Russell came through to the checkered flag 4.2 seconds ahead of second place.

Babbitt’s Online/Monster Energy/Kawasaki’s Josh Strang worked his way to another second place overall finish after starting his day mid-pack. As the white flag flew Strang turned it up a notch, closing the gap between himself and K. Russell. Strang currently sits second in the points standings after four rounds of racing.

Coming through to earn third in the XC1 Open Pro class and fourth overall was AmPro Yamaha’s Layne Michael. After a strong start to the day, Michael found himself second overall throughout the first two laps of racing. Michael would battle throughout the day, but would hold onto third place in his class at the completion of three hours.

Babbitt’s Online/Monster Energy/Kawasaki’s Jordan Ashburn put in a great ride at the Bulldog GNCC as he finished fourth in the XC1 Open Pro class. Ashburn ran a consistent pace for the duration of the race, keeping his fourth place position for the entire three-hours. Ashburn holds onto the third place position in the points standings.

Returning to racing in Georgia was FMF/KTM Factory Racing’s Josh Toth. After reinjuring his leg before the start of the season, Toth was forced to sit out the first three events. Toth would find himself swapping between the fifth and sixth place positions multiple times during the race. At his first race back in 2020 Toth would finish out the day with a fifth place finish in XC1.

After running eighth for majority of the day, it was FactoryONE Sherco’s Grant Baylor pushing throughout the last lap to make his way into the sixth place position. Baylor remains sixth in the points standings. Phoenix Honda Racing’s Andrew DeLong came through seventh in XC1, and currently sits eighth in the points standings after four rounds of racing. Rockhill Powersports/TI Dezigns/UFO Plast’s Evan Earl came through the finish line running eighth in XC1 Open Pro.

Rockstar Energy/Factory Husqvarna Racing’s Craig DeLong earned the $100 Hot Cams XC2 after a great jump off the starting line. DeLong would head into the woods on a mission. DeLong found himself in the overall lead on adjusted time, but as the race wore on his adjusted time fell off the leaders pace. However, DeLong was able to capture the XC2 250 Pro class win, and claim third overall on the day.

Earning second in the XC2 250 Pro class was XC Gear/Enduro Engineering/Husqvarna’s Ryder Lafferty. Lafferty had an excellent start to the day after coming through timing and scoring third in the class on the opening lap. Lafferty would move into the second place position, and remain there for the rest of the race.

AmPro Yamaha/St. Lawrence Radiology Mike Witkowski made his way into third after starting out the day back in the fifth place position. Witkowski would put his head down and push through the heat and dust during the three-hours of racing. With two laps to go, Witkowski made the final pass to take over the final podium finishing position.

Trail Jesters KTM’s Jonathan Girroir and Beta USA’s Cody Barnes rounded out the top five in the XC2 250 Pro class at the Bulldog GNCC. Girroir moves back to second in the points standings after four rounds of racing have been completed.

In the WXC race it was BABs Racing Yamaha/Maxxis’ Becca Sheets picking up where she left off at the last GNCC event, earning herself another overall win in the 10 a.m. race. Rockstar Energy/LanMills XC Tayla Jones battled her way through the pack, clinching second overall and in the WXC class. AmPro Yamaha’s Rachael Archer brought home a third place finish in WXC at the Bulldog GNCC. Jumping off the line first earning the $100 Trail Jesters Holeshot award was Enduro Engineering/MEPMX/Fly Racing/KTM’s Mackenzie Tricker.

When the checkered flag flew at the conclusion of the 8 a.m. youth race it was Team Green Kawasaki’s Jack Joy earning the overall win and YXC1 Super Mini Sr. class win. Fellow Team Green Kawasaki rider Grant Davis battled back and forth throughout the race, earning second overall on the day. Rounding out the youth top three overall was YXC1 Super Mini Sr. competitor Cole Forbes.