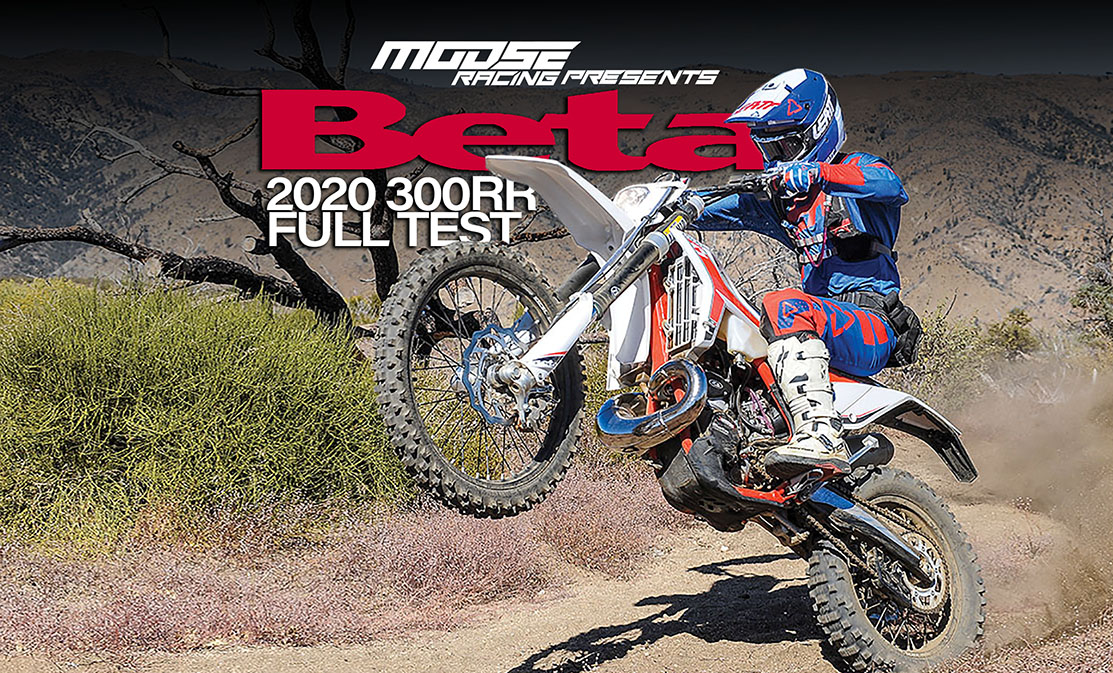 Beta has come out of the dugout swinging for the fences in 2020. While its 300 has a strong following, criticisms centered on the old-world feel of the powerband, excess vibration and lethargic handling. The 2020 300RR is pretty much a brand-new machine. Beta made big changes to the chassis, and the new engine and handling traits are making major headlines.

WHAT’S NEW FOR THE ITALIAN MACHINE?
The all-new frame features redesigned geometry and enhanced rigidity for improved agility and stability. Weight has been shaved and durability increased with precision-cast components, and vibration has been reduced via new head bolts. The frame is thinner, targeting maneuverability in technical off-road terrain. It is narrower at the base, which improves handling over difficult sections and typical off-road tracks. The subframe is an all-new composite design, which is stronger and now houses the air filter, electronics (battery) and oil reservoir for the oil injection. The bike sports new, wider aluminum footpegs, built-in grab handles in the subframe and a unique push-button removal system for the new seat, plus a more ergonomically friendly and larger-capacity fuel tank (2.55 gallons). The brakes are Nissin, and the tires are Michelins, with the rear being a shorter-knobbed Eco tire.

Sachs components are used again for both suspension ends, though they have been totally revised. The inner cartridge is new, lowering the center of gravity, and is valved for greater plushness and improved action on square-edged hits. On-the-fly adjustments are made easier, since the compression, rebound and preload adjusters are all on top of the fork. The Sachs shock is lighter and has been fit with a new top-out system that helps the rear tire maintain traction. The compression valving is more progressive, and a new shock bumper helps with bottoming resistance.

The big news is that the engine has been fit with a counterbalancer to fight vibration. It is a six-speeder, carbureted via a 36mm Keihin, and features electronic oil injection. A V-Force reed cage controls the fuel/air mixture flowing into the cylinder. It features a dual map switch that alters the engine mapping to meet the demands of varying terrain. The plated exhaust pipe is new. The muffler is long and lacks a spark arrestor, and Beta has updated the cooling system. The hoses are run inside the frame, and the coolant flows through more efficient radiators.

TRAIL TIME—LOVIN’ THE NASTY STUFF
This machine comes jetted superbly. Our machine started (via the button) instantly, and even though our testing starts at the desert floor at around 2,500 feet of elevation and rises to over 8,000 feet, the 300RR ran incredibly clean. For 2020, the 300RR still comes equipped with oil injection. This is another great feature that operated flawlessly during testing. The oil injection also keeps the exhaust tract much cleaner, as all of the unburnt oil doesn’t drip out of the silencer.
One ride on the 2020 Beta 300RR will make you realize how far modern European two-strokes have come and just how important a counterbalancer is. The Beta has very minimal vibration in the handlebars or the footpegs—much less than in years past. This is a huge improvement, especially for long days on the trail. 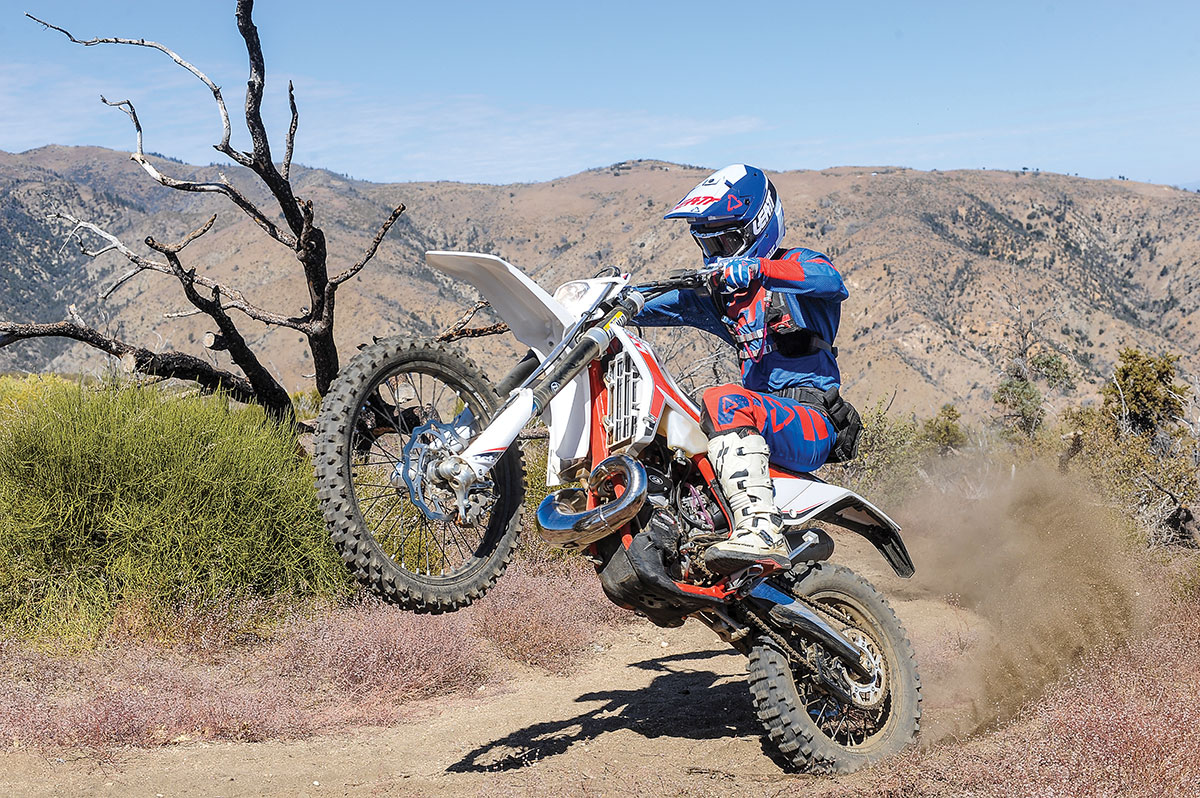 The Beta’s power is both pleasurable and easy to manage. It craves technical singletrack riding. It can be lugged down to a crawl without stalling, whereas most other bikes would flame out on you. The bike prefers to be ridden in the low- to midrange meat of the powerband, making it very easy to get traction in downright nasty situations. The bottom-end power feels much stronger and smoother than in years past, and short-shifting works well.

On top, the power is decent but not memorable or strong enough to make you want to rev it and stay pinned. It likes staying in the middle. This keeps the suspension relaxed and the rear tire snagging traction. It also helps with control. Oddly enough, the dual map switch is located on the steering head just above the fuel tank. It works really well. The rain map softened the hit and allowed for very smooth throttle applications. In the sunshine mode, it is definitely more aggressive, and you can feel the bike rev quicker and with more authority. For most of our technical testing, we rode the bike in the rain mode to get the most traction possible.

Beta has also improved its cooling system, routing the hoses inside of the frame and employing new radiators to help with heat transfer so that the bike can operate at a lower temperature in extreme conditions. We never boiled the bike over, even in intense enduro conditions, which is very impressive considering there is no fan on the bike. The Brembo clutch worked superbly with an easy and light pull, making slow, technical riding much easier on our clutch hand.

Beta redesigned its chassis for model year 2020, and this is another significant improvement. The bike is lighter than in years past, and the overall balance of the machine feels planted. It is much narrower through the seat and footpegs, and this makes the bike much easier to maneuver on the trail when you need to change direction in a hurry or weave through trees. As balanced as the chassis feels on the trail and over the rocks, you can feel the trials influence on the brand. The Beta steers and tracks smartly, requiring little input as you navigate obstacles. The cockpit is a bit compact but fits average-size pilots well. Our older, taller editors definitely wanted a thicker saddle and the bars mounted farther forward.

The evolution of the Sachs suspension has helped with the 300RR’s off-road appetite. The new fork definitely stays up in the stroke better than last year’s and takes in the harsh whack with more zeal. It’s not hugely plush on little hacky stuff, but did improve as we got more time on the machine. Kudos to the adjusters placed on top. We bounced around two to three clicks both ways on the compression, depending on the terrain and speeds. We left the preload adjuster where it was. In the backyard, we set the sag at 105mm with the rider aboard. Our tester Ryan Koch, who, at 5-foot-7 and 145 pounds, is on the slighter side, praised the machine’s planted feel and its natural tendency to go where he pointed it. In whoops, the machine feels light, both suspension ends are balanced, and it tracks straight, even under duress. In the loose rocks and tree-root-littered mountain trails, the fork and shock absorbed the trail debris with control and a consistent feel that resisted deflection. It’s a big improvement over last year, and the lighter feel and more precise handling help to solidify the package.

ODDS AND ENDS
The subframe is composite this year as well, and the bike also got a new airbox and air-filter design, making filter changes a simple task. Beta also tucked most of its electrical components away nicely and neatly in the new airbox, which enhanced the waterproofness. Wider pegs are also among the long list of changes, making standing on the pegs much more comfortable. The wider handlebars weren’t that noticeable, but there were no complaints, and the bend of the handlebar was very comfortable. A noticeable difference is the seat foam, which is softer than in years past, making seat time much more comfortable. The seat can also be removed with a very trick push-button system on the subframe and is much easier to line up than in years past. The Nissin brakes were strong and consistent, and we never experienced any fading with extreme use.

One other change is the wider kickstand foot. In years past, if you stopped on the trail, the bike would sink into the ground and fall over. Beta added a wider plate at the bottom of the kickstand so there is no need to fear dropping your bike at a trailside stop. There is also a redesigned speedometer and odometer with a slimmer overall size. The fuel tank is larger at 2.55 gallons, so we were able to do 50-mile loops on the bike easily. The smallish enduro headlight is not bright enough for serious night riding, but it is nice to have if you need to get back to your truck and it’s getting dark. The overall redesign of the bodywork is much slimmer-feeling and fits together much tighter, making for an extremely clean appearance. Also, the wheels are strong, and we never had any spokes come loose during testing.
It’s strange that this machine does not come stock with handguards. Did they forget that this is an off-road/enduro bike? The Beta also lacks a spark arrestor, something mandatory if you plan to ride on public land. For some, the lack of a kickstart is a concern. 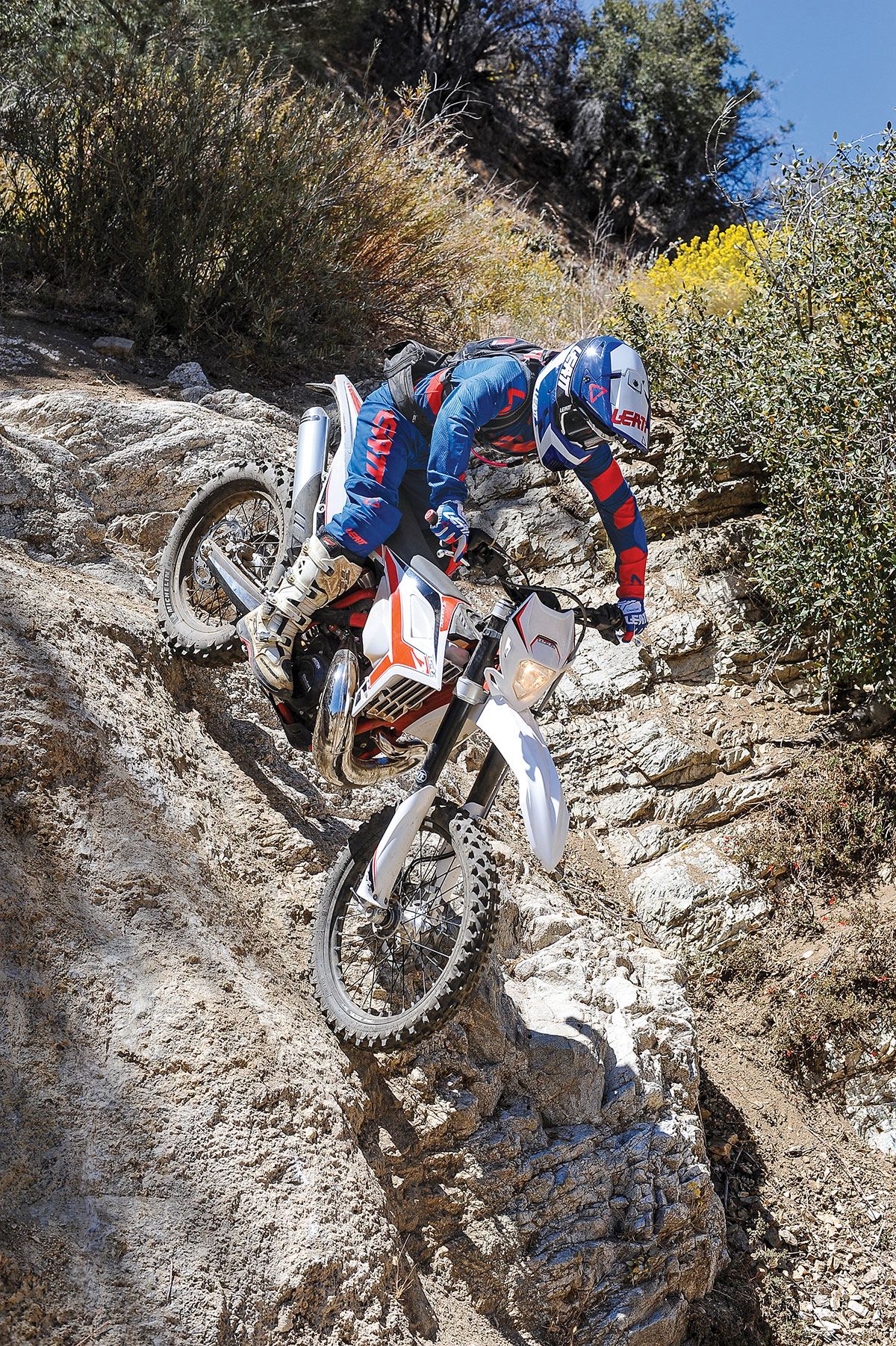 SO, WHERE ARE WE?
Overall, the Beta 300RR is an updated, refined and ready-to-ride machine. It is monumentally improved over last year’s machine. The chassis is thinner, more maneuverable and feels lighter. The suspension isn’t cushy, but it stays up in the stroke and helps with the bike’s handling manners. The engine loves the chug and track mode of conquering terrain. Hard enduro pilots and riders who prefer obstacle-charged riding will love the powerband, the six-speed gearbox, the hydraulic clutch and button start, all with less vibration. The bike requires very minimal setup and is easy to adapt to. With the updates and changes, Beta has made a huge jump into the modern world of two-strokes.
In the big world of competitive 300 off-road machines, the Beta is a player. Look for a comparison among the stars of that world down the road.