Just when it looked like the pecking order was established in the 2020 Monster Energy Supercross season, everything was shaken up at the Atlanta Supercross. Ken Roczen rode a flawless main event to win the race and recapture at least co-ownership of the points lead, but all kinds a chaos took place behind him. The bottom line is that Eli Tomac overcame a bad-starts, crashes and collisions to eventually climb back up far enough to avoid losing the red plate completely. So as we start the second half of the season, Tomac and Roczen are once again tied, while Cooper Webb and Justin Barcia made up ground. For extended coverage of the 2020 Atlanta Supercross, click here.

Ken Roczen led all nine laps of the first heat, but Jason Anderson and Justin Brayton were right there, keeping an eye on things. Justin Barcia had to make a few quick passes to get into fourth, but had difficulty making any more ground. Aaron Plessinger, Malcolm Stewart, Ryan Breece and Tyler Bowers also qualified straight out of the heat. 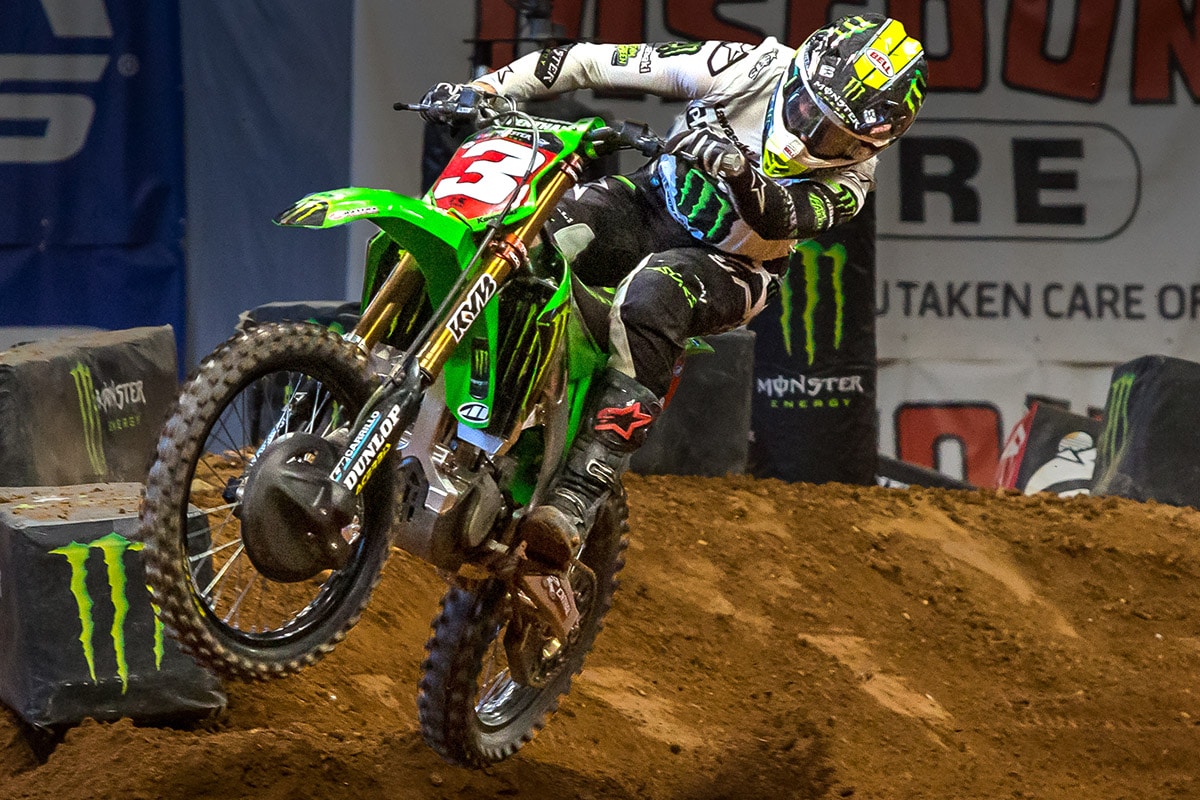 Eli Tomac asserted himself from the start of the second 450 heat. Martin Davalos looked great for a few laps, but started getting a little loose, allowing Justin Hill and Cooper Webb to get by. Cooper Webb was riding well, showing very little ill effects of his Arlington crash. Chad Reed took eighth, qualifying for his 257th main event.

Eli Tomac’s perfect night unraveled at the  start of the main event. He started poorly while Roczen grabbed the holeshot. Within a lap, Tomac somehow got up to 7th place , but he was surrounded by riders like Anderson and Baggett and Barcia, who wouldn’t give up easily. Anderson and Barcia both passed Tomac on the next lap, with Tomac coming back hard on Barcia a few turns later. In the meantime Roczen was beginning to get away from Martin Davalos and Justin Hill. Vince Friese and Dean Wilson were next. Tomac tried to pass Baggett on the fifth lap and it went bad, with both riders hitting the ground. Tomac went to 14th; Baggett lost a full lap. The wildest battle was then taking place around fifth place, where Anderson was chasing Barcia and trying to hold off Wilson, Webb and Plessinger. As the race progressed, Tomac worked his way into the top 10, but Roczen had built a 10-season lead over Davalos, who was having an increasingly tough time dealing with Hill, Friese and Barcia. Barcia passed both Friese and Hill and was suddenly pressuring Davalos for second. Shortly afterward, there was  a big pile up that sidelined Anderson, Friese and Wilson, and just like that, Tomac was up to sixth. With five laps to go, Barcia moved in to second. After that, Davalos had to worry about Webb and, amazingly, Tomac. On the white flag lap, Webb and Tomac both passed Davalos. Webb barely held off Tomac at the  finish. Roczen won with almost 20 seconds.