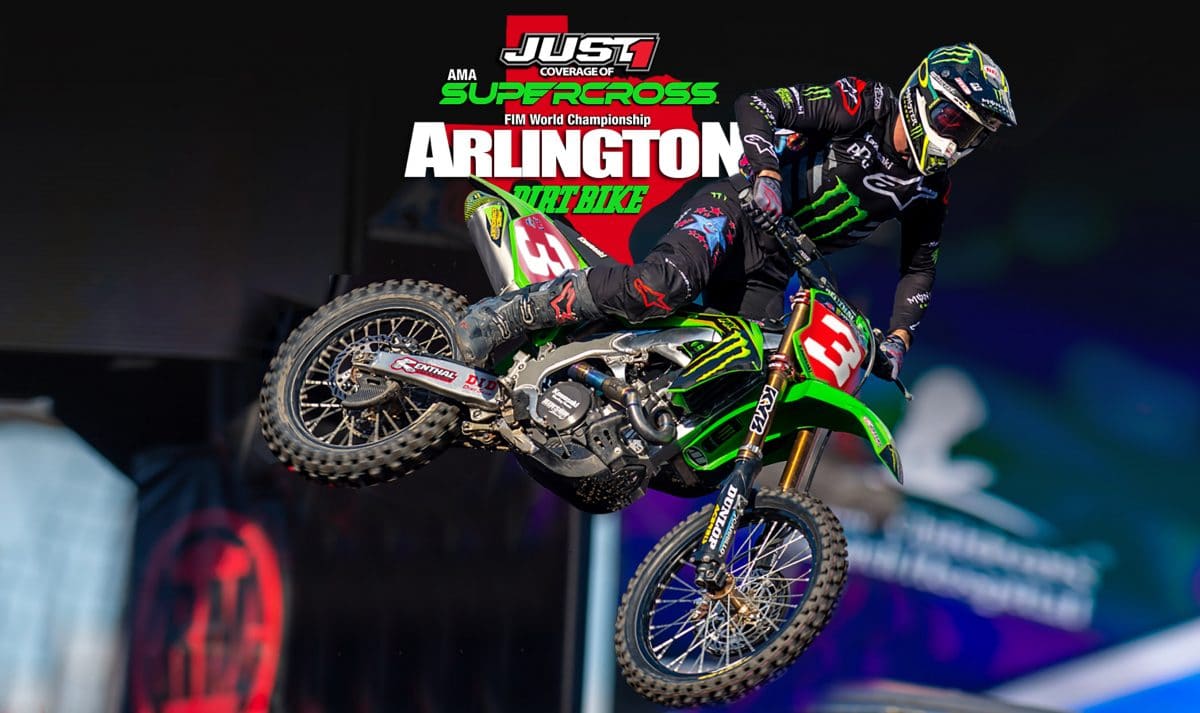 The Monster Energy Supercross season picked up outside of Dallas at Arlington, Texas with a new points leader. Eli Tomac got to wear the red plate for only the fourth time in his career as they lined up for the Triple Crown, where the riders would face off for three main events. By the end of the nigh, Tomac’s hopes of keeping that point lead improved dramatically. Not only did he win the overall, but Adam Cianciarulo suffered a crash in practice and broke his collarbone, then Cooper Webb crashed in the same spot in the second Main event. Webb would not be able to start the final race. For extended coverage of the 2020 Arlington Supercross, click here.

450 MAIN EVENT ONE
Jason Anderson and Cooper Webb both went into the first turn side by side with Webb coming out ahead. Roczen passed them both within a lap to take the lead. Fast qualifier Justin Hill went down on the first lap while Eli Tomac was buried way back in the pack. Roczen pulled away quickly with Webb second, Jason Anderson third, Justin Brayton fourth, Martin Davalos fifth and Zach Osborne sixth.  It took about three laps for Tomac to break into the top 10. Davalos and Justin Barcia both passed Brayton, but after that the pack settled down. As the race progressed, Webb couldn’t make up any ground on Roczen. Tomac spent most of the race behind Malcolm Stewart in ninth, but finally got past as the race came into its second half. Davalos then went down and within another lap, Tomac was in sixth behind Brayton and Barcia. Then Brayton went down in the whoops, giving Tomac yet another spot. In the final laps, the order was set with Roczen 3 seconds ahead of Webb, Anderson, Barcia, Tomac and Justin Hill, who made an amazing come back after his first-lap crash.

450 MAIN EVENT TWO
Blake Baggett got a great start, but Eli Tomac had him within a lap. Malcolm Stewart was right there, as well. Almost immediately, Tomac began to squirt away. Roczen was in ninth and Webb was 10th . Justin Hill got past his teammate Stewart, while Jason Anderson watched from fifth. Soon, he passed Stewart for fourth. Within the next few laps, Webb was moving forward and Roczen was going the other way, getting passed by Justin Barcia in 10th. Up front, Tomac had a solid 5-second lead while Anderson moved past Baggett for second. In the middle of the race, it looked like Webb was the only one moving forward. He passed Stewart for fifth, then closed on Baggett–who promptly fell down. Just like that, Webb was closing on Justin Hill for a podium spot. With two laps to go, however, Webb suffered a horrendous endo, landing hard on the cement. It was almost the same sport where Adam Cianciarulo broke his collarbone earlier in the night. Tomac won over Anderson, Hill and Osborne.

450 MAIN EVENT THREE
Eli Tomac’s stock went up dramatically as they lined up for what would be an epic third main event. Not only was Adam Cianciarulo out after a practice crash, but Cooper Webb also was out following his crash in the second Main. Tomac’s biggest problem for the night was Jason Anderson, who was slightly ahead for the night’s overall tally. Zach Osborne and Blake Baggett were 1-2 at the start, with Anderson third.  Tomac’s start was typically mid-pack. Anderson passed Baggett on the second lap and set out after Osborne. Roczen soon moved into third. Before long, Tomac was up to fifth. Then Baggett went down, giving him another spot. That set the order for the next few laps, with Osborne having one of his best rides all year. Justin Barcia, Dean Wilson, Aaron Plessinger and Vince Friese followed at a distance. Anderson passed Osborne for the lead at the halfway mark. Shortly afterward, Tomac and Roczen started banging bars for third, passing each other several times. Tomac was riding aggressively, passing Roczen , then passing Osborne on back-to-back laps. With three minutes left in the race, Tomac passed Anderson. A lap later Roczen also passed Anderson, but then immediately lost the position. On the final lap, Anderson went down in the whoops, giving second place once and for all to Roczen.