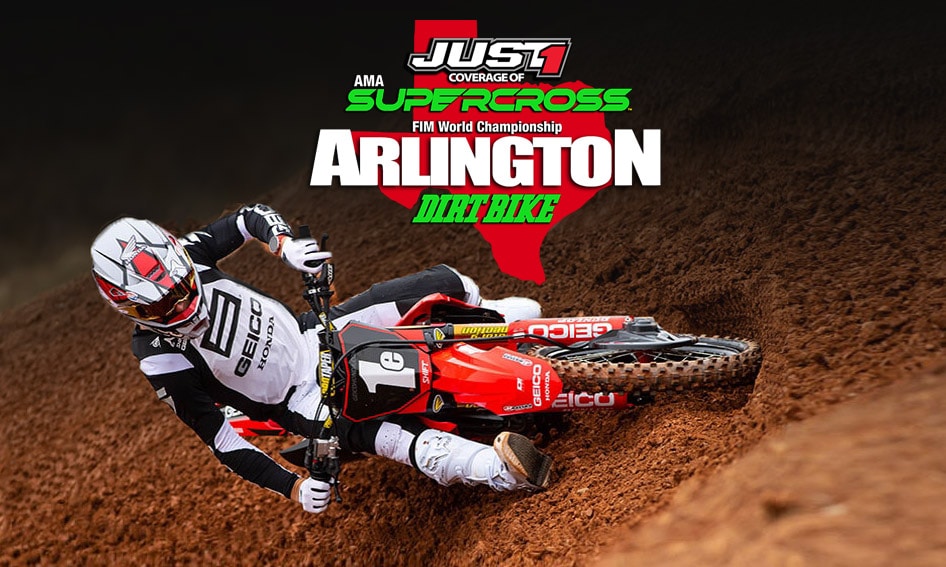 Chase Sexton got even with Shane McElrath as the 250 East riders rolled into AT&T Stadium just west of Dallas, Texas for round two of their series within the 2020 Monster Energy Supercross season. All eyes were on the two of them after they went 1-2 at Tampa last weekend. This was a Triple crown event. That means the 22 top riders were prequalified earlier in the day before three separate main events. When it was all over, RJ Hampshire, Sexton and McElrath had wins, but it was Sexton with the overall. He would also become the co-owner of the red number plate of the points leader.

For extended coverage of the 2020 Arlington Supercross, click here.

250 EAST MAIN EVENT  ONE
Chase Sexton swapped bikes just before the start of the first main. Then it was Jordon Smith who pulled the holeshot, only to be passed by RJ Hampshire quickly. Sexton was in third and Shane McElrath was buried in the pack. Hampshire pulled a few bike lengths ahead, and Sexton soon passed Smith while Jeremy Martin watched from fourth place. After a couple of laps, McElrath was up to sixth. At the halfway point, Sexton passed Hampshire for the lead, but then Hampshire came back hard and Sexton hit the ground. He picked it up only to be passed by McElrath for fourth. Both McElrath and Sexton passed Martin as the race came into its final laps. The two of them were racing hard and not leaving much room as they closed on Smith. McElrath bumped Smith off the track and moved into second place, but then Sexton passed them  both a lap later. On the final lap Smith had his hands full with Martin, who closed the door again and again. Hampshire won the race with a few seconds over Sexton, McEltath, Smith and Martin.

250 MAIN EVENT TWO
Josh Hill got the holeshot with Chase Sexton in second. Shane McElrath was mid-pack while Jordon Smith and RJ Hampshire were at the tail end of the entire pack. Within a lap, Sexton got into the lead and McElrath was up to fifth, going back and forth with Garrett Marchbanks. Joey Crown moved up into second past Hill, while Sexton pulled away.  By mid race, McElrath was up to third behind Joey Crown.  Jordon Smith had made up a lot of time, but tangled with Jason Owen and they both went down. That gave RJ Hampshire a boost into eighth. Soon, McElrath was second, but Sexton had a 10 second lead by that time. Crown then had his hands full with Jeremy Martin, who soon moved into third. In the final laps, McElrath could do nothing to reel in Sexton, who eventually took an easy win.  Martin was third ahead of Marchbanks and Crown. Hampshire passed Hill at the line for sixth.

250 MAIN EVENT THREE
It was looking good for Chase Sexton as they lined up for the third main event. He didn’t have to win, but he couldn’t allow another rider between McElrath and himself. McElrath got the start with Sexton right on his tail. Enzo Lopes was third head of RJ Hampshire, Jordon Smith, Jeremy Martin and Joey Crown. Smith got  up into third on the third lap. Martin also got past Lopes. Hampshire then knocked down Smith and took over third. In the next few laps, Sexton did what he had to do, staying close to McElrath and pulling away from Hampshire.  Martin was all alone in fourth for most of the race, with Garrett Marchbanks moving up to fifth.