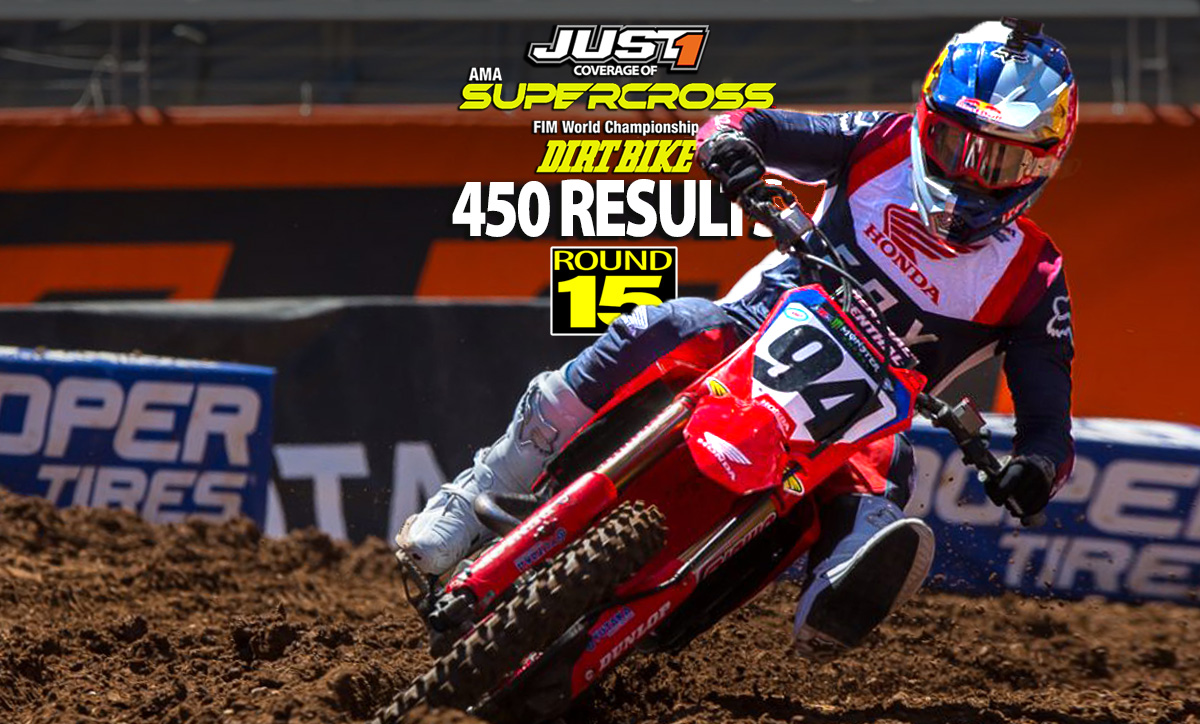 So far, this final run of the 2020 season has been a standoff between Kawasaki’s Eli Tomac and KTM’s Cooper Webb, but Kenny Roczen made an amazing comeback this weekend to re-insert himself in the chase.  The factory Honda rider had tested positive for shingles, which is a painful nerve disease related to chicken pox, but seemed to shake that off and was the dominant rider of the day, winning both his heat and the main. As it stands, Tomac now enjoys a 24-point lead, which means his still safe, but might not be able to wrap up the championship with a race to spare. For more coverage of the 2020 Monster Energy Supercross season, click here.

After setting the second fastest qualifying time of the day, Benny Bloss continued one of this best days ever by taking the heat one win. For most of the race, Martin Davalos  was in front, with Bloss close behind. When Davalos went down with three laps to go, Bloss inherited the lead, but Dean Wilson was right on his heals. Wilson made a pass, with two laps to go, but Bloss came right back. “Wilson passed me, but I said ‘I’m this close to my first ever heat race, I’m not letting it happen!” said Bloss afterward.

The second heat was loaded with all of the series favorites and it was Kenny Roczen on top when they rounded the first run. Malcolm Stewart was second and after a lap, Eli Tomac was third ahead of Jason Anderson and Blake Baggett. Within a few laps, Baggett went down and Tomac passed Stewart for second. In the final laps, Tomac never made a serious challenge for the lead The biggest battle on the track was Cooper Webb pushing to take fourth place away from Jason Anderson, but it never happened.

The 450 LCQ had some heavy hitters, with both Bake Baggett and Croc Tickle going down in their respective heat races. Baggett took a relatively uneventful win wit Tickle taking second ahead of Ryan Breece and Mason Kerr.

All the favorites were up front in the first turn, but it was Cooper Webb who ended up with the lead. Tomac was rattled around a little in the first turn, but recovered for sixth place. Jason Anderson, however, went down early, leaving Webb and Kenny Roczen in front. Four laps into the race, Roczen took the lead from Webb while Zach Osborne held on to third and Malcolm Stewart was fourth. Tomac then came up to join those two. The order rearranged itself with Tomac taking third, Stewart fourth and Osborne fifth. Benny Bloss, Vince Friese, Justin Hill and Jason Anderson all were involved in a pile up just before the halfway mark. Through the next few laps Roczen’s lead grew, then stabilized and Tomac couldn’t seem to close  on Webb. In the end, Roczen took the win and moved back into second in the points, while Tomac seemed content to let his massive points lead shrink only slightly.

SALT LAKE CITY 5: FORKNER VS FERRANDIS, ONE ON ONE

2020 SUPERCROSS POINTS STANDINGS AFTER ROUND 15