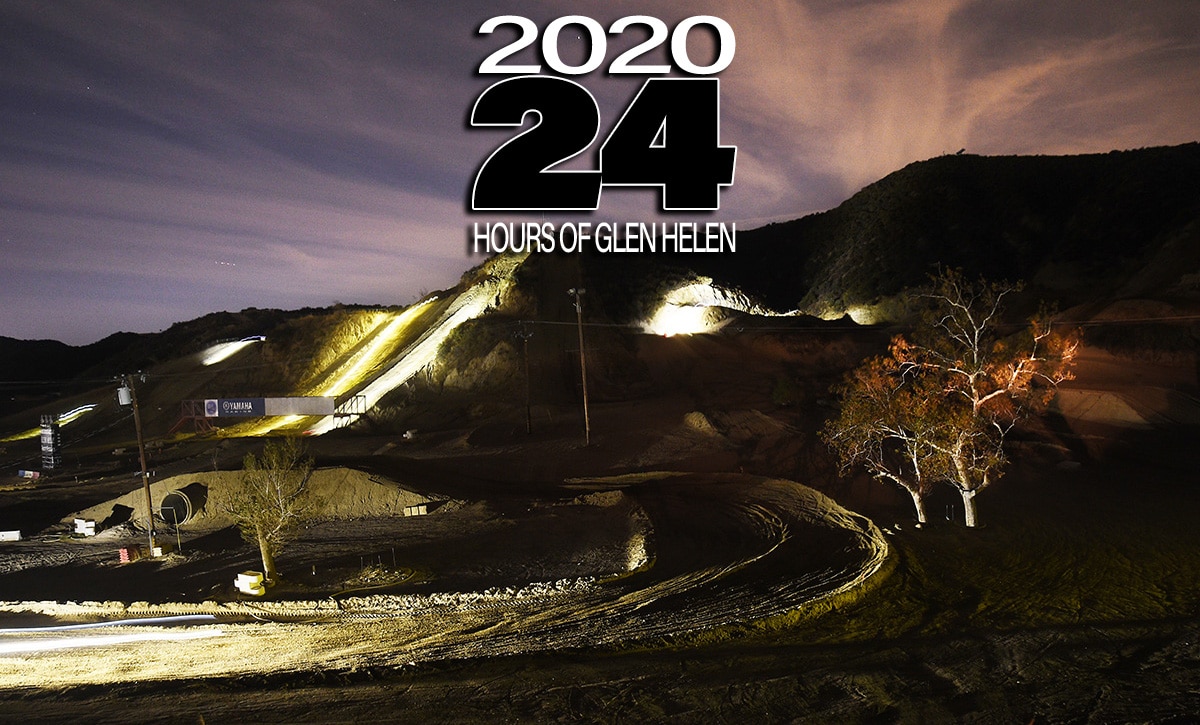 The 2020 3-Bros 24 Hours of Glen Helen took place over the weekend and, as usual, it was a battle to the finish. This year there were a number of stacked teams, not only in the Pro class, but in the sportsman ranks. This is one of the few races where elite riders of the off-road world are pitted against National caliber MX pros. The course was a 9-mile affair that linked the national motocross course with the REM track, the Glen Helen Truck Stadium, the arenacross track and the trails surrounding Glen Helen Regional Park. The race started at 10 a.m. Saturday and continued for 24 hours without break. Glen Helen’s staff did its best to maintain the course with the race in progress, but with each hour, the riders had to contend with more and more difficult conditions even as they battled fatigue. Pro teams are limited to four riders and one bike, while sportsmen teams can have up to six riders and two bikes. The extra bike is expected to remain in impound until it’s put into action–at which time the primary bike is impounded.

This year saw an official Pro Circuit entry return to the list of Pros. Josh Mosiman of Motocross Action Magazine was instrumental in organizing a team consisting of Zac Commons, Carlen Gardner and Preston Campbell.  They were the favorites going in, but it was the Husky-mounted Blayne Thompson team with Ryan Surratt, Jeff Loop and Danny Cooper that set the pace for the first few hours. Tyler Nicholson, Thomas Dunn, Cody Simpson and Christian Clark put together a team that was in the mix up front, as well. Derek Ausserbauer, Colton Udall, Nic Garvin and Evan Kelly teamed together as did Nick Stover, Brandon Gravley, Colton Aeck and Trevor Hunter. All five of those teams were within a couple of minutes of each other well into the race, then Thompson’s team started having bike issues. For a hot minute, the Stover team was leading, but then the Pro Circuit team got in front and gradually started pulling ahead.  By nightfall, they had a two-lap lead, but that’s rarely enough in this race. It was about midnight that things started going wrong. The Pro Circuit Honda lost fourth gear, forcing the riders to do without. Somehow, the rest of the gearbox held together for the remainder of the race, giving the Pro Circuit boys the win over Ausserbauer’s team. Nicholson’s team was third ahead of Stover’s team.

Fifth overall was the top AA team, which had Matthew Canepa and Mike Metzger. Behind them was a team led by Jesse Canepa. The riders who are the most impressive each year are the minis and the Ironman. There was only one mini team this time. It consisted of Trystan Alvarez, Dustyn Davis, Brennan Watson, Kyle Miller and Max Esquiviel.  The Ironman winner was Michael Fichera. For full results, go to www.Glenhelen.com.