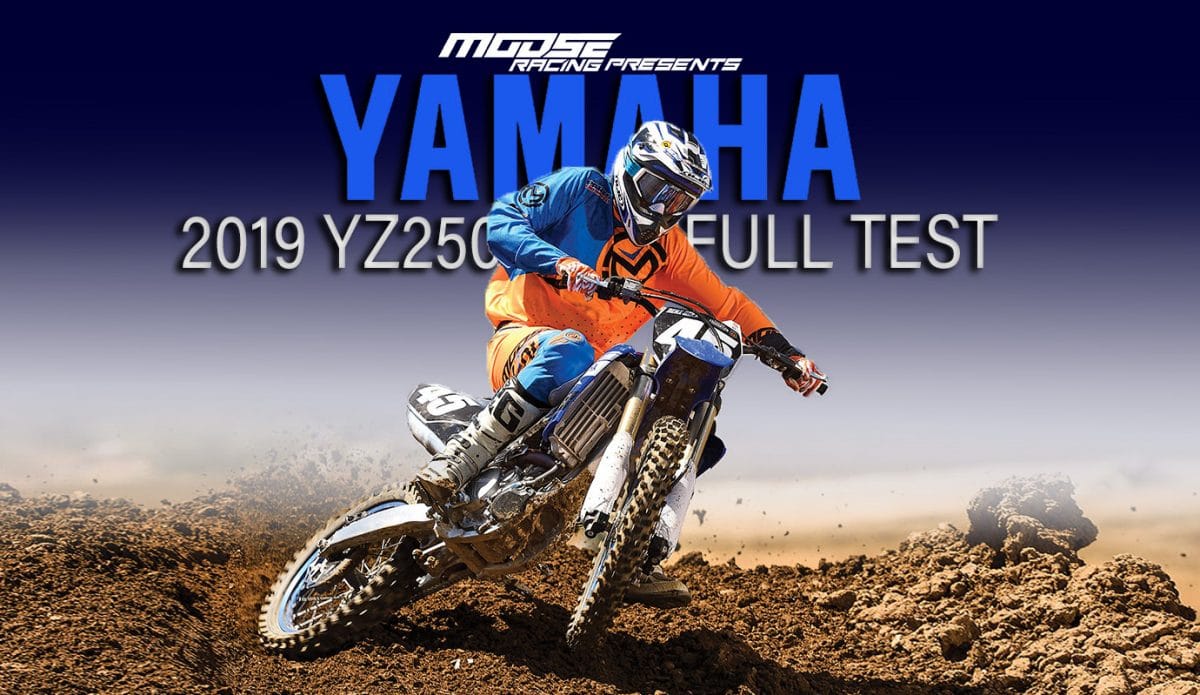 We’ll miss the previous version of the Yamaha YZ250F. We loved it so much that we almost didn’t want to put a bullet in its head. But we did it anyway, of course. In the 2018 Dirt Bike 250F motocross shootout, it didn’t win. It didn’t finish second, and it didn’t finish third. Despite being virtually every test rider’s sentimental favorite, the Yamaha YZ250F finished in fourth place. We buried it behind the barn and told all the innocent novices and beginners that it was on vacation in a better place, with perfect traction and dark, moist dirt. A more accurate description of heaven for the old YZ250F would be a place where there are no KTMs and where electric start hasn’t been invented. There, it could still rule supreme, just as it did from 2011 to 2016. We can still salute the old YZ, and it still has fans everywhere. But it’s gone now, and the 2019 version is completely and totally different.

HOW DIFFERENT?
Virtually everything on the 2019 YZ250F is different from the old bike, but it’s not really accurate to say the bike is new. The chassis is almost identical to that of the 2018 YZ450F. It has the same frame, same bodywork and the same suspension, albeit with different spring and damping settings. The 450, of course, was stunningly new last year, and it didn’t take any special insight to see that the 250 was next. The headline is that the bike now has electric start, but that’s not surprising or even the most important aspect of the bike. The motor was redesigned in search of more peak power. The head still has the exhaust in the rear, but it’s been reconfigured, and the top end sits more upright by 1 degree. Yamaha didn’t adopt the finger-follower design that we’ve seen on other bikes, but apparently achieved similar results with much wider valve-actuation buckets. The Star Racing Yamahas used by riders like Aaron Plessinger were modified in this way, which is no small re-engineering task. The wider buckets allow for much more aggressive cam profiles.

The intake valves have considerably more lift, which created the need for stiffer valve springs. The shape of the valve ports is straighter, thanks to a new two-step machining process, and the piston is new, too, giving the motor a higher compression ratio (13.5:1 compared to 13.8:1). Everything in the lower end received attention, except for the crankshaft itself. The gear material is new, and the clutch is considerably larger. The plate diameter is up 7mm, there’s a sixth clutch spring and the number of friction plates has been reduced from nine to eight. Yamaha has gone much further than any other company in granting access to the inner workings of the bike’s brain. The Yamaha Power Tuner smartphone app was introduced with the 2018 YZ450F, and now the same system is used on the 250. You can download a free phone app that allows you to alter the EFI map and the spark advance. This is a far cry from the locked EFI systems that we saw at the dawn of the digital age. In order to do this, Yamaha switched the EFI system from Keihin to Mikuni, and now each bike broadcasts its own Wi-Fi signal. You insert a user code into your phone that prevents outside tampering, and now that the system has been in use for a year, it has proven to be fairly reliable.
As far as the chassis itself, it’s not just similar to the 450’s—it is the 450’s. The beams have new shapes, and the motor mounts have been relocated. The bottom line is that it’s much more rigid than the old 250 frame. Yamaha claims that vertical rigidity is up 25 percent, horizontal rigidity is up 9 percent and torsional rigidity is up 15 percent. Along with the frame comes all the 450’s bodywork, with a lower seat and a flatter transition from rear to front. 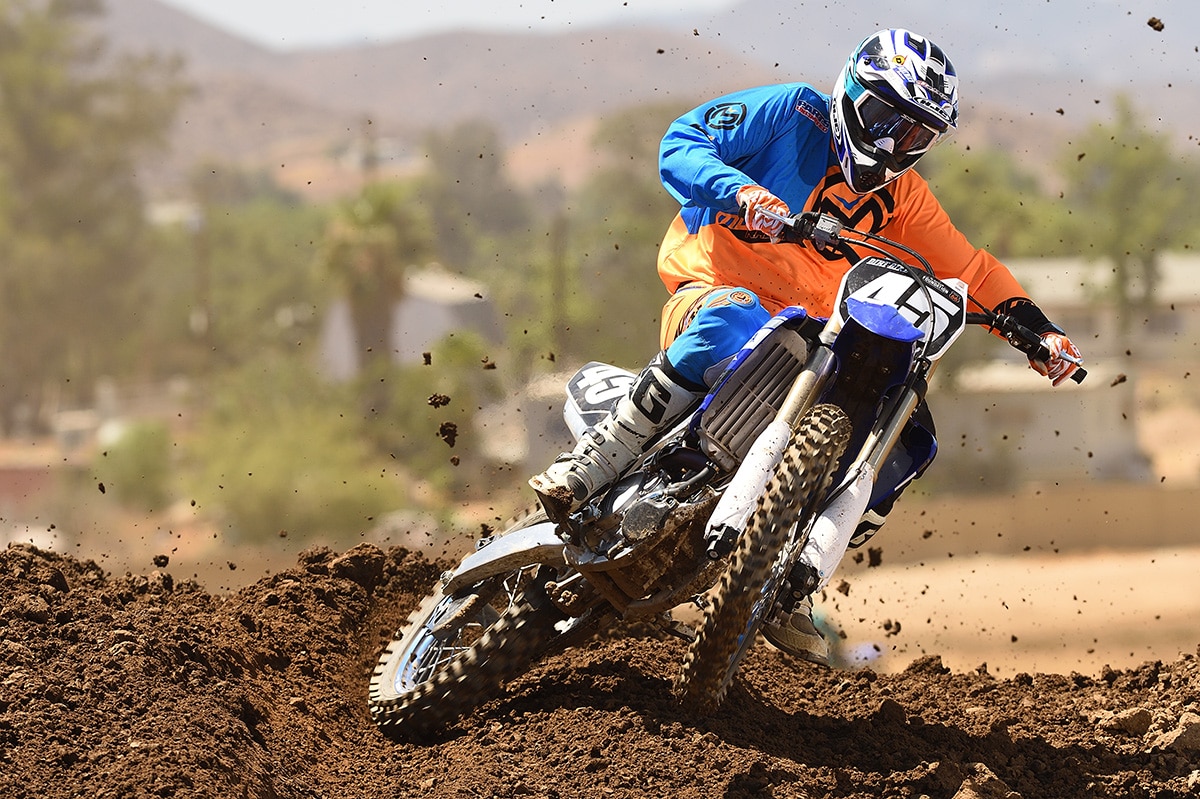 As far as suspension goes, Yamaha’s philosophy of sticking with a coil-spring fork has clearly won the war of ideas. Japan has emerged from the era of air forks. The KYB fork on the YZ250F has a number of changes, including a larger piston and cartridge, a redesigned mid-valve and stiffer springs. The rear shock has a larger reservoir and a stiffer spring. Weight-wise, the rear spring is actually lighter. Yamaha also shaved off a little weight in the rims and handlebar, but the overall weight is up, as you might expect with the advent of electric start. The bike weighs in on the fantastic Dirt Bike analog scale at 227 pounds without fuel. That’s up 5 pounds.

THE MAIN EVENT
It wasn’t the kickstarter that cost Yamaha its place on top of the 250F class. It wasn’t weight or handling, either. It was peak power, plain and simple. That’s no longer a problem, because the 2019 YZ250F now has serious firepower. You almost never talk about a “hit” when you ride a modern 250F. The feeling of a sudden burst of power at a particular point in the rpm range is usually associated with two-strokes and 450s. But, there’s no question about it—the YZ barks. It makes the old one seem like an enduro bike. Way down at the bottom of the rev range, the new bike probably isn’t as torquey as the old one, but when you get into the midrange, it comes on hard and fast. In the middle of the powerband, the Yamaha is like nothing in the 250 class; it seems more like something with an aftermarket big-bore kit.
Will the Yamaha get the honor of being the fastest in its class? It will be close. The KTM, Husky and Honda are no match for the YZ on the bottom and through the middle, but those bikes might be more willing to scream. The Yamaha can’t be coaxed very far beyond its power peak. It stops cold when it reaches its 14,000-rpm redline, so you learn to shift on cue. Expecting more is just greedy.
This is where the Yamaha Power Tuner could come into play. With the stock map, the bike peaks as it hits the rev limiter. You can’t change the max rpm, but you can alter fuel delivery and spark advance at high revs to make the power peak arrive earlier. The YZ also has an annoying pop on deceleration that we would like to tune away. We’re still testing, but we will publish our findings on www.dirtbikemagazine.com, so check in.

NO RELATION
There are hecklers in the crowd who complain that the YZ450F isn’t especially good in turns. Those critics are absolutely quiet where the YZ250F is concerned, despite the fact that the two bikes share the same frame. The YZ250F is stable in the straights and excellent in corners. That’s the way we described last year’s YZ250F, too, but don’t think they feel the same. The new bike has a very different layout and overall feel. The seat is lower in the rear and the bars are higher, which means you have to ride the new YZ with your weight more deliberately forward. Yamaha’s in-house test riders still feel strongly that the bike works best with 100mm of rear suspension sag; no more, no less. We can’t complain about the results. The Yamaha’s suspension is absolutely phenomenal. We were a little worried about the stiffer rates because we felt that the previous version was already stiff for the target 250F rider, who is around 150 pounds. The new model doesn’t feel stiffer. It’s a plush ride.
Big riders might be less at home on the new bike, not because of spring rates, but because the riding position is cramped up in the knees. Even riders of average height might want Yamaha’s optional tall seat. Otherwise, the bike is agreeable to everyone. The new clutch has a freakishly light pull, the shifting is easy and the brakes are good, although not the strongest in the class.
Is all that enough to put the YZ250F back on top of the 250F world? It would be if this were last year, but the 2019 crop of 250s has changed yet again, with Suzuki, Honda, KTM and Husqvarna making big changes and talking smack. This is going to be fun.