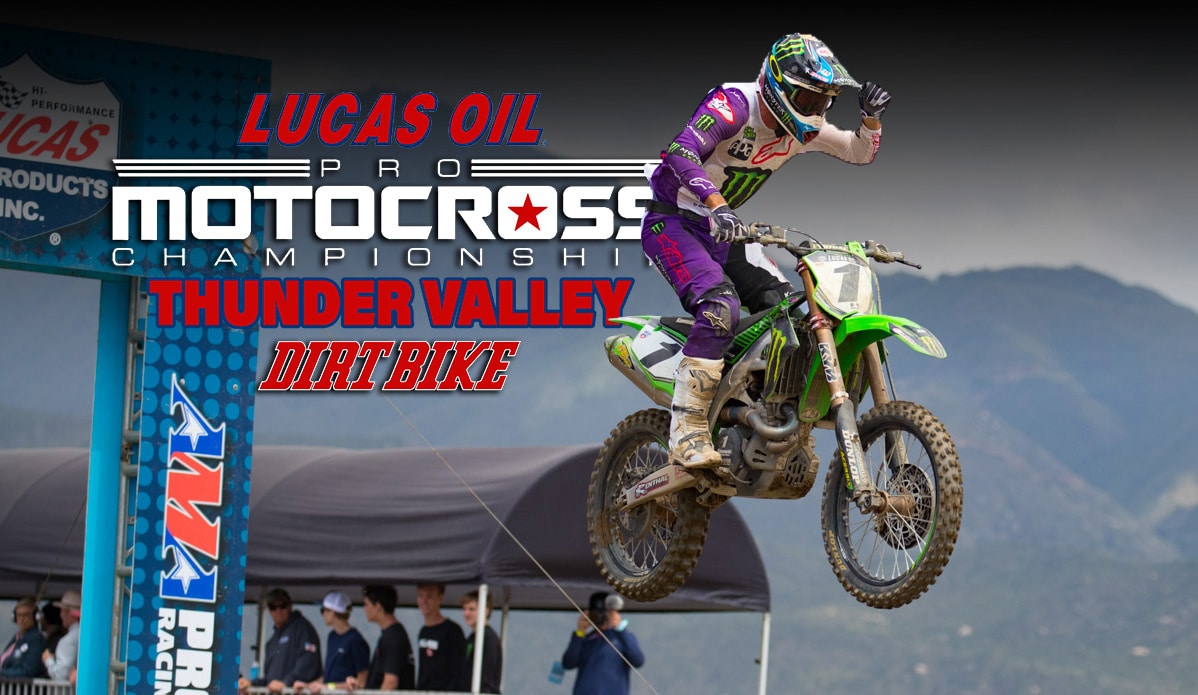 This weekend marks the 15th Annual Lucas Oil Pro Motocross National hosted at Thunder Valley Motocross Park. The track in Lakewood, CO consists of some long, fast sections and a few bigger jumps that, combined with the location’s 6000 foot elevation, will leave many of the riders struggling a bit to clear. Over the years, we’ve seen some memorable things happen at Thunder Valley. In 2008, the first and only national raced at night was held there (as the heat and elevation would have been too much to bare during the daytime) where James Stewart took the 450 class win, on his way to a perfect 24 for 24 moto-win season, and Ryan Villopoto took the lites class (now the 250 class) win, going towards his his final little bike championship. 2010 brought the Motocross of Nations, where the American team of Ryan Dungey, Andrew Short and Trey Canard took home the victory, their second to last most recent win (the most recent being in 2011). Thunder Valley is also the track that we saw James Stewart crash at in 2012 while leading the first 450 class moto, after being distracted by a race official crossing the track just in front of him. Eli Tomac’s perfect season run ended early in Colorado back in 2015, when he suffered a crash while leading the second moto of the day and was left with a dislocated shoulder. A track that is packed full of so many memories in its short 15 year history on the circuit, what else is there to expect out of the facility come Saturday? After two rounds of racing, the riders are ready and raring to go. Here’s how they stack up heading into round three of the Lucas Oil Pro Motocross Championship at Thunder Valley Motocross Park. (For extended coverage of the 2019 Thunder Valley National MX, click here) 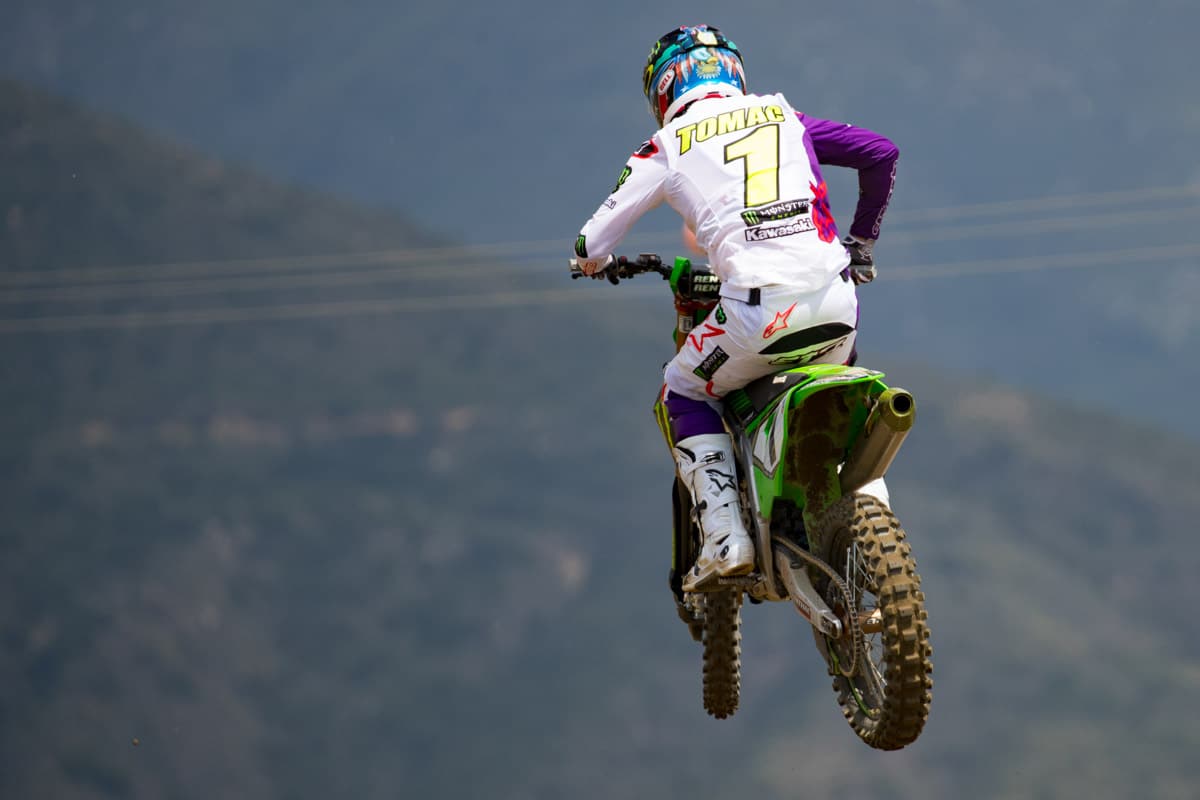 After the first two rounds of racing in the 2019 Lucas Oil Pro Motocross Championship, reigning back to back champ Eli Tomac has shown once again that he has the speed to get things done and go after his third consecutive title. The Monster Energy/Kawasaki rider has now won three of the first four motos, landing just off the podium in moto one at round one. Tomac grabbed the red plate back from Ken Roczen last week in Pala, CA after spending the weekend without it and will be representing as the points leader coming into his hometown race in Colorado tomorrow. Eli was also able to pick up his first 1-1 moto scores since he did it last at Washougal last year. He will undoubtedly be wanting to pick back up where he left off last weekend.

HRC Honda’s Ken Roczen has clearly gotten back to his normal feeling self, or at least close to it. The German rider snagged the overall win at the opener a couple weeks ago at Hangtown and even after leaving Fox Raceway last weekend sitting second in the championship standings, has managed to lead more laps than anyone else amongst the 450 field, a whole 10 laps more than the current points leader Eli Tomac. So, even without the red plate on his bike, Ken Roczen has obviously started feeling more comfortable again and could rebound back this weekend from his third overall finish at round two.

Marvin Musquin has quickly progressed since his first gate drop this season, going from 7-4 moto finishes and a sixth overall in Sacramento to a 3-2 moto score for second overall at the previous round at Fox Raceway, where he was also able to lead the first half of the second moto. Making continuous progress in every moto so far this year, it will be no surprise to see Musquin land on the top step of the box in Colorado tomorrow.

It has been no surprise to see Adam Cianciarulo having the success he’s had so far this outdoor season. After a disappointing finish to his 2019 Supercross campaign, Adam wanted to put the past behind him and not let it make a negative impact on the Lucas Oil Pro Motocross Championship as well. Thus far, he’s done just that, winning two of the four motos he’s lined up for, both overalls and continuing his points lead into Thunder Valley this weekend. He’s also been the only rider in the 250 class to land on the podium in every moto, continuously showing he has the speed to stay at the front of the pack.

Star Racing/Yamaha’s Justin Cooper is the only other member of the 250 division to be able to win motos so far this year, winning both first motos at the first two rounds. The rider out of New York has undoubtedly proved he has what it takes to win at the Lucas Oil Pro Motocross Championship, but just hasn’t been able to put together a solid second moto. Thunder Valley could be where we see him turn things around.

Dylan Ferrandis has consistently been close to the front of the pack, but has yet to crack past third place. At round one, he was edged out by his teammate Colt Nichols for third overall after tying in moto scores, but the French rider landed inside the top three overall at the last round after going 7-3 in the motos, which aren’t finishes we normally see out of a podium finisher. As many people say, the championship doesn’t really start until you’re out of California, so we may see a newfound level of speed from the 2019 250 West Coast Supercross Champion.

Last weekend we saw RJ Hampshire have an impressive ride in the first moto, finishing second behind Justin Cooper. After that solid start to his day, a busted water pump kept him away from his first overall podium finish of the year. Expect to see him back toward the front of the pack again this weekend.

We finally got a glimpse at what Hunter Lawrence has in store for the 250 class in the second moto last weekend, leading much of it until a small tip over let points leader Adam Cianciarulo back by. Lawrence did make another incredible charge at the lead, but his efforts were too late. However, the results showed the Australian’s capabilities when it comes to the outdoor racing and we expect to see more of that at round three tomorrow.