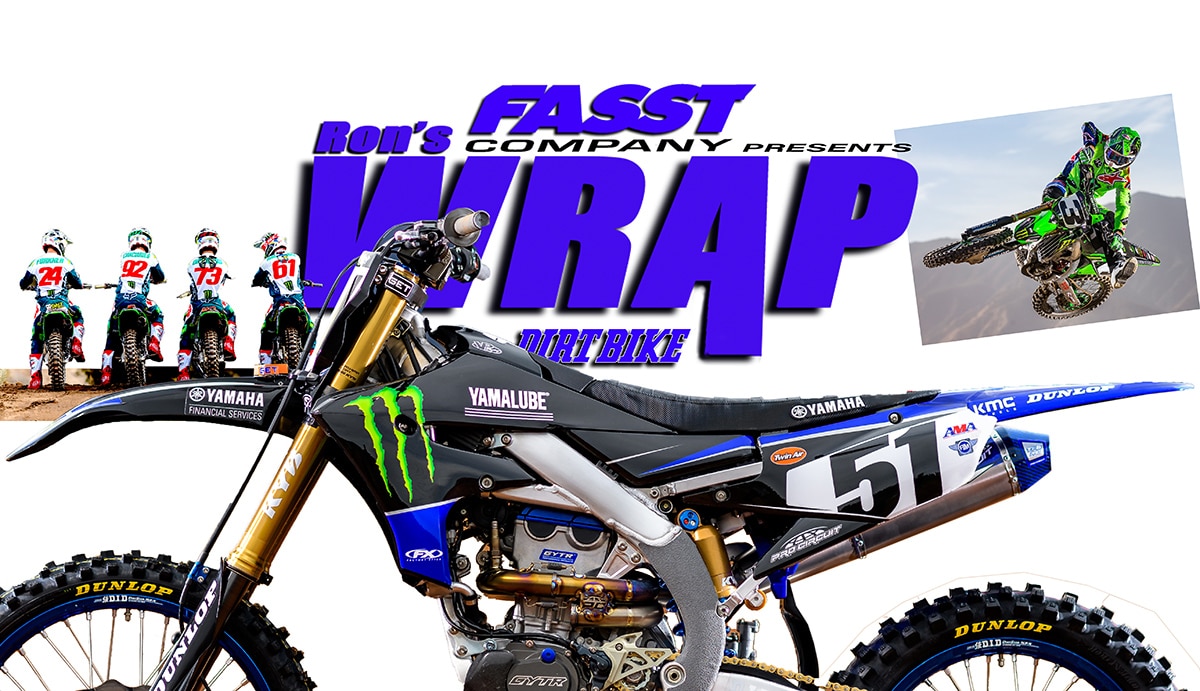 Supercross starts tomorrow! This is going to be a wild season–it certainly was last year. If you’re going to be at A1, or just watching it on TV (Remember, it’s now on NBS Sports Network), here are some of the bikes you’ll see. 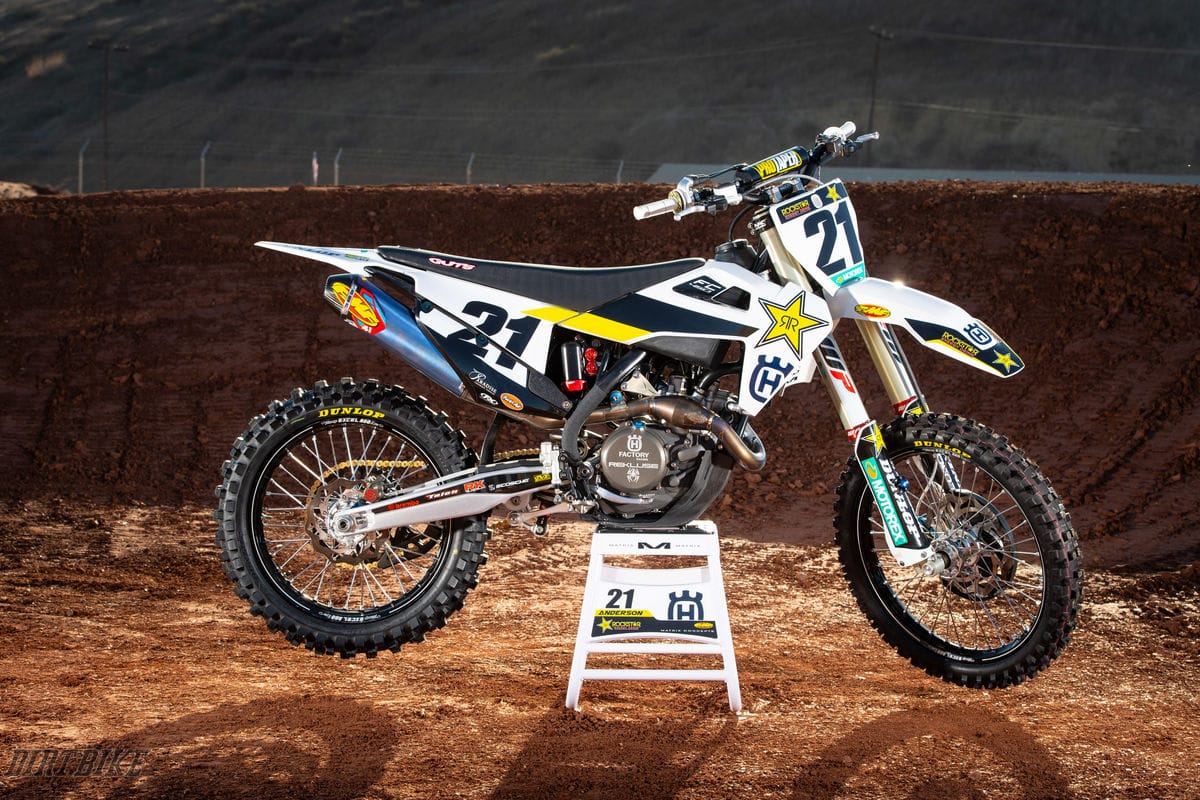 Jason Anderson will, of  course, be the star of Team Rockstar Husqvarna. His bike will be sporting a big number one and he is said to be healthy. The same can’t be said of his 450 teammate Zach Osborne, who broke his collarbone this week.  Dean Wilson had already secured factory-level equipment from Husqvarna prior to Osborne’s injury; now he will likely have more official status. Their bikes will be essentially the same as the one that Jason used to win the 2018 title. There are no frame or engine case changes for the new Rockstar Edition. 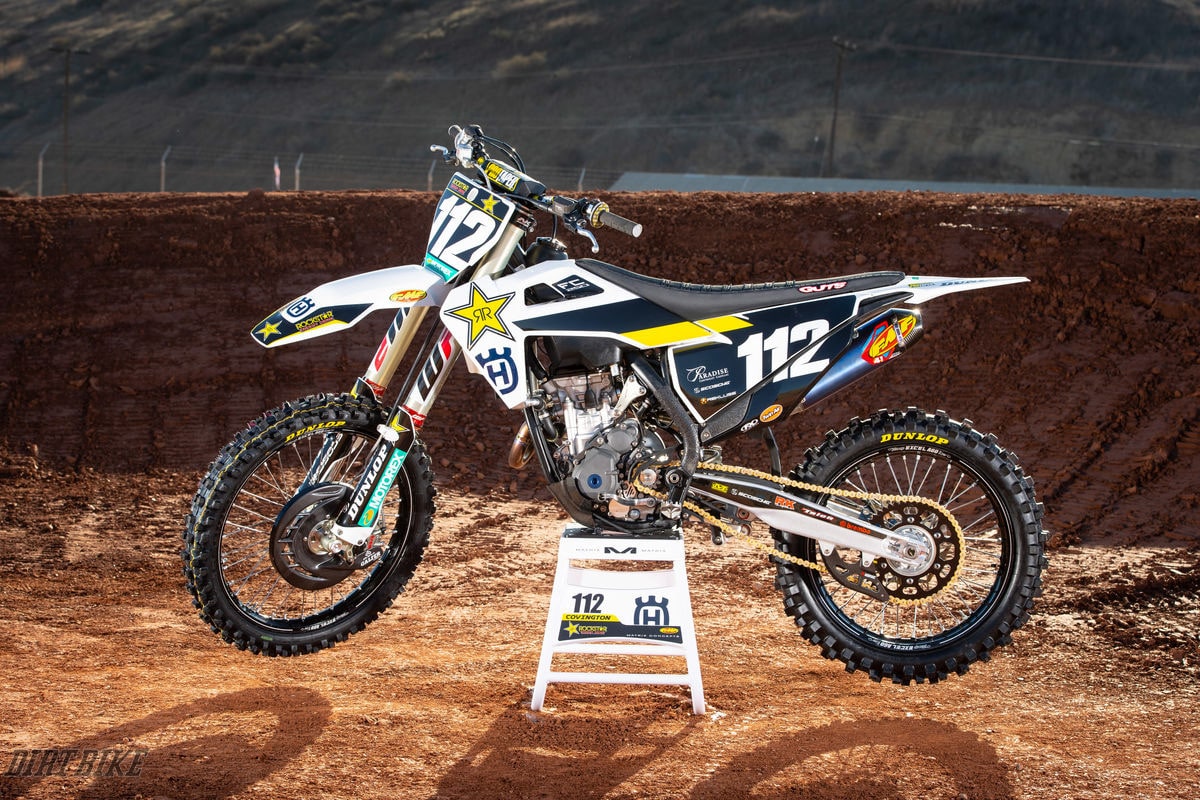 In the 250 class, Husqvarna will be represented by Michael Mosiman, Thomas  Covington and Jordan Bailey. Of the three, only Mosiman will be riding the west series and starting at A1. For 2019, there is no Rockstar Edition for the 250 class, and the bikes are not expected to have changed dramatically for the new season. 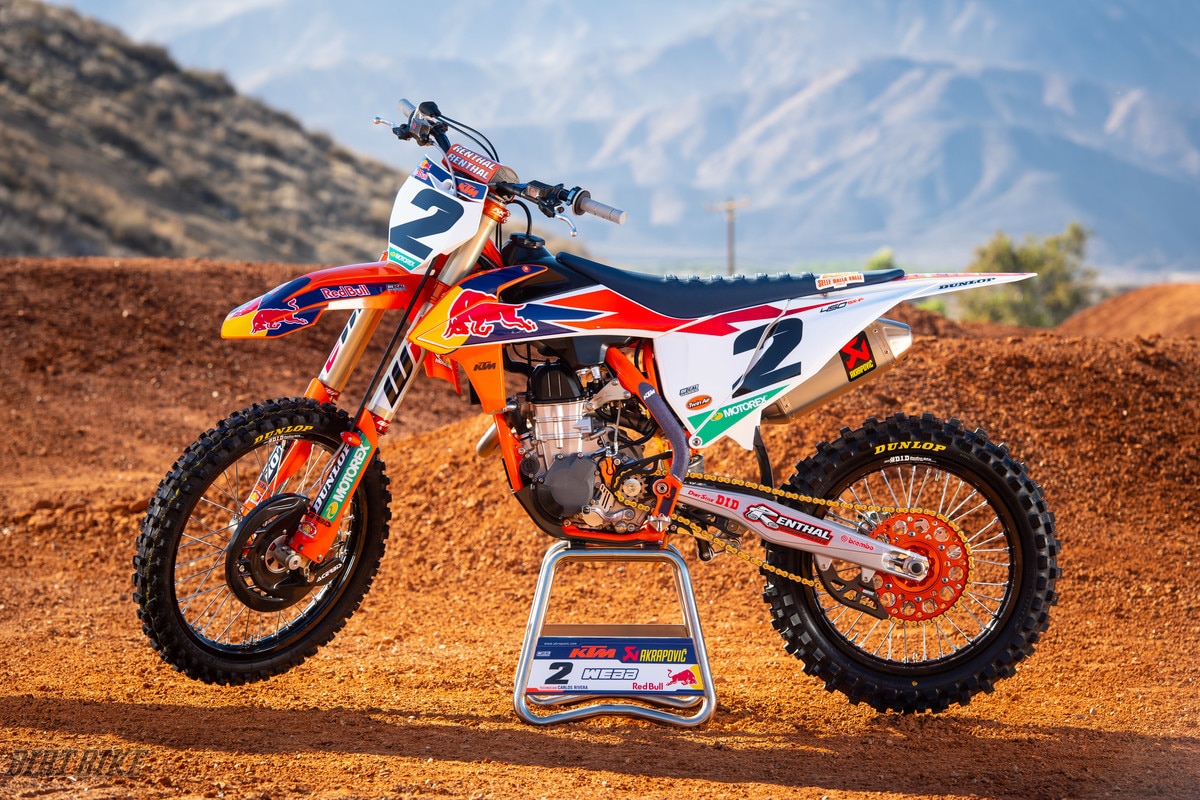 Cooper Webb will be joining Marvin Musquin on the  Red Bull KTM team. Everything has changed this year for Webb; his bike, his mechanic and he’s training with Aldon Baker. The KTM factory bikes don’t have substantial changes for the 2019 season. Webb is said to be healthy, but Musquin missed much of his off-season testing time because of a knee injury.  Last year’s KTM Factory Team member Broc Tickle was fired mid-season because of a positive result on a drug test. His case is still under review, but in the meantime, he’s suspended. 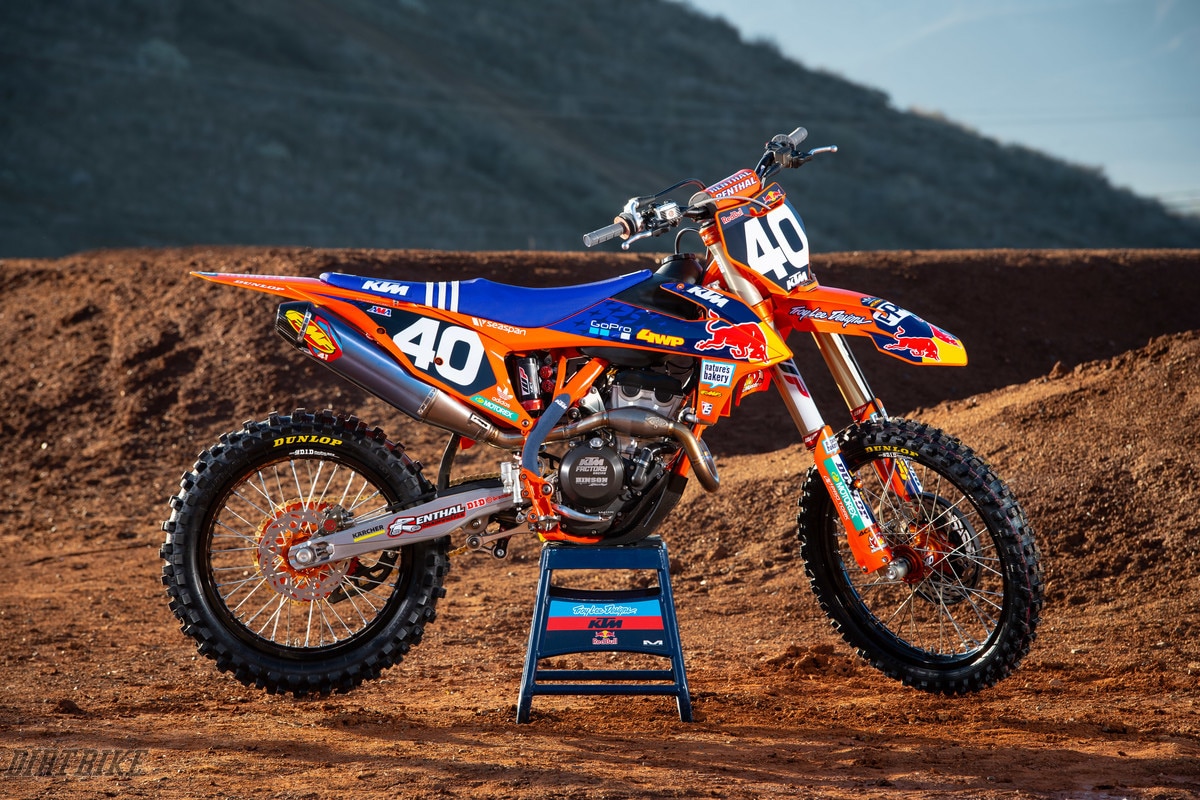 The Red Bull Troy Lee KTM team in the 250 class will be represented by Shane McElrath, Mitchell Falk, Sean Cantrell and Jordon Smith. The west coast riders at A1 will be McElrath and Cantrell. 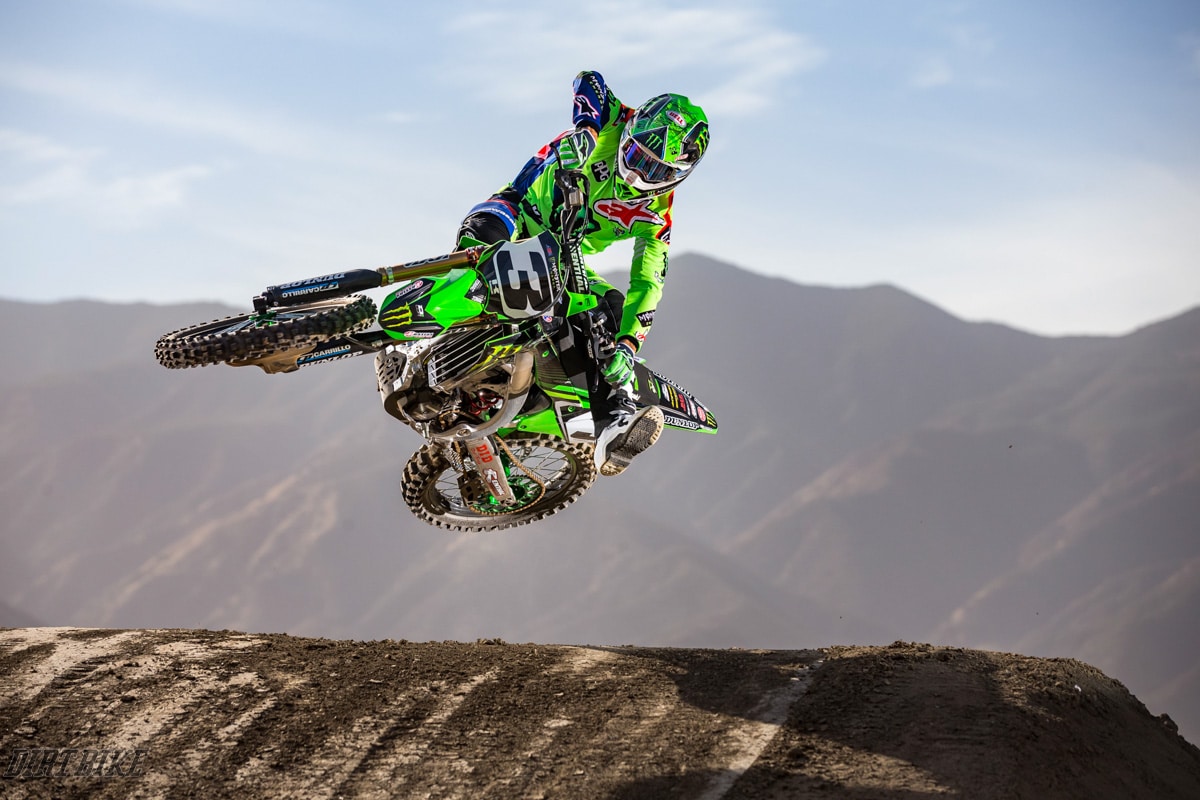 Eli Tomac already rode his brand new factory KX450 with $1,000,000 of success at the Monster Energy Cup, so there’s no question about him adjusting to his new ride. His health is a little unclear. He’s recovering from a back injury, but has been riding. 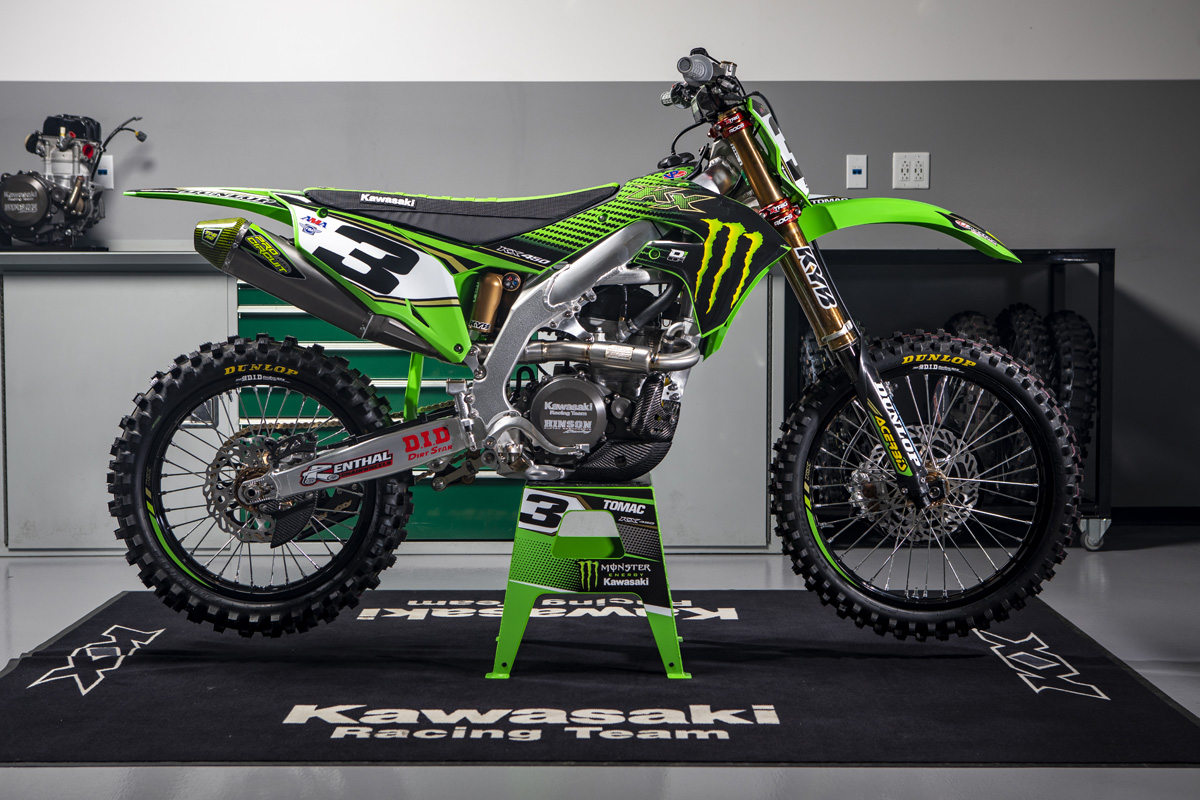 The 2019 Kawasaki KX450 that Eli rode at the Monster Cup will have most of the same parts. He also rode the new bike at the Motocross of Nations. The Pro Circuit 250 team will have Austin Forkner, Adam Cianciarulo, Martin Davalos and rookie Garrett Marchbanks. We haven’t yet heard who is riding west and who is riding east. Pro Circuit released the  following stats on its riders: 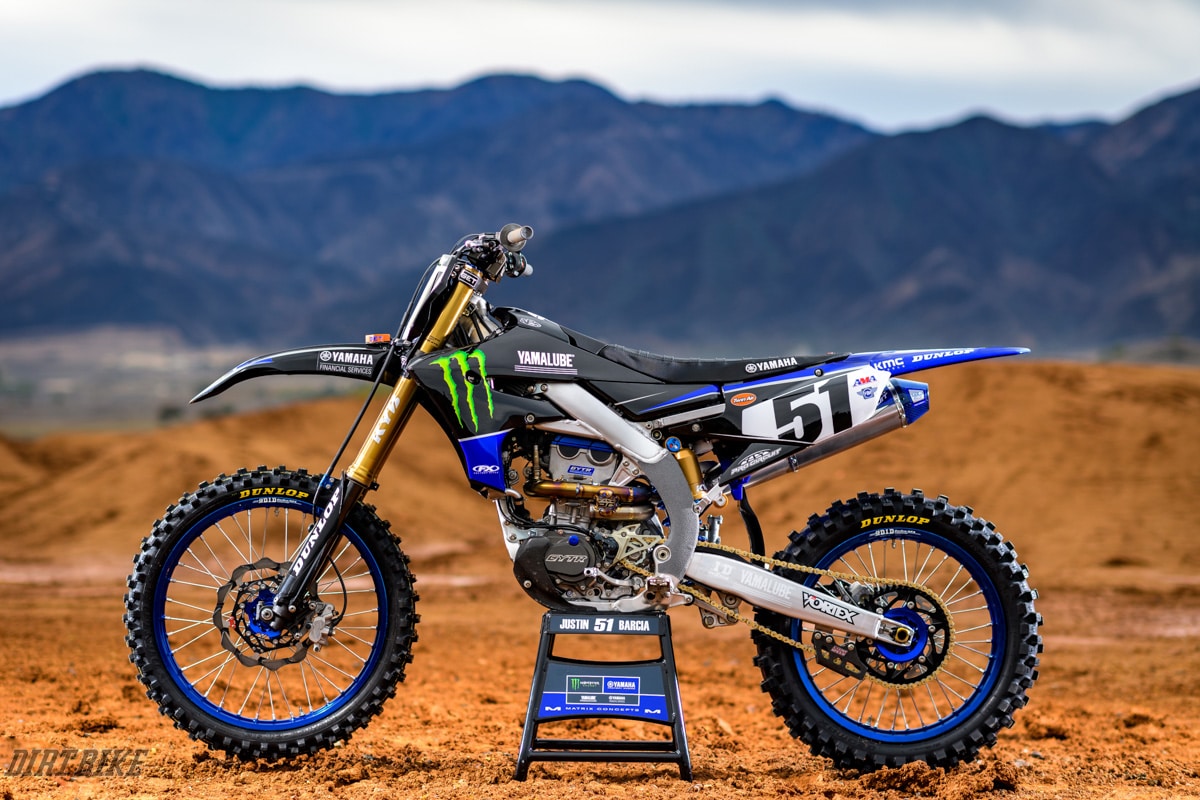 Justin Barcia’s bike will have a new look with a lot more Monster and a lot less Toyota. Under the new graphics, there shouldn’t be many changes. Pro Circuit, GET and GYTR are still the major players. 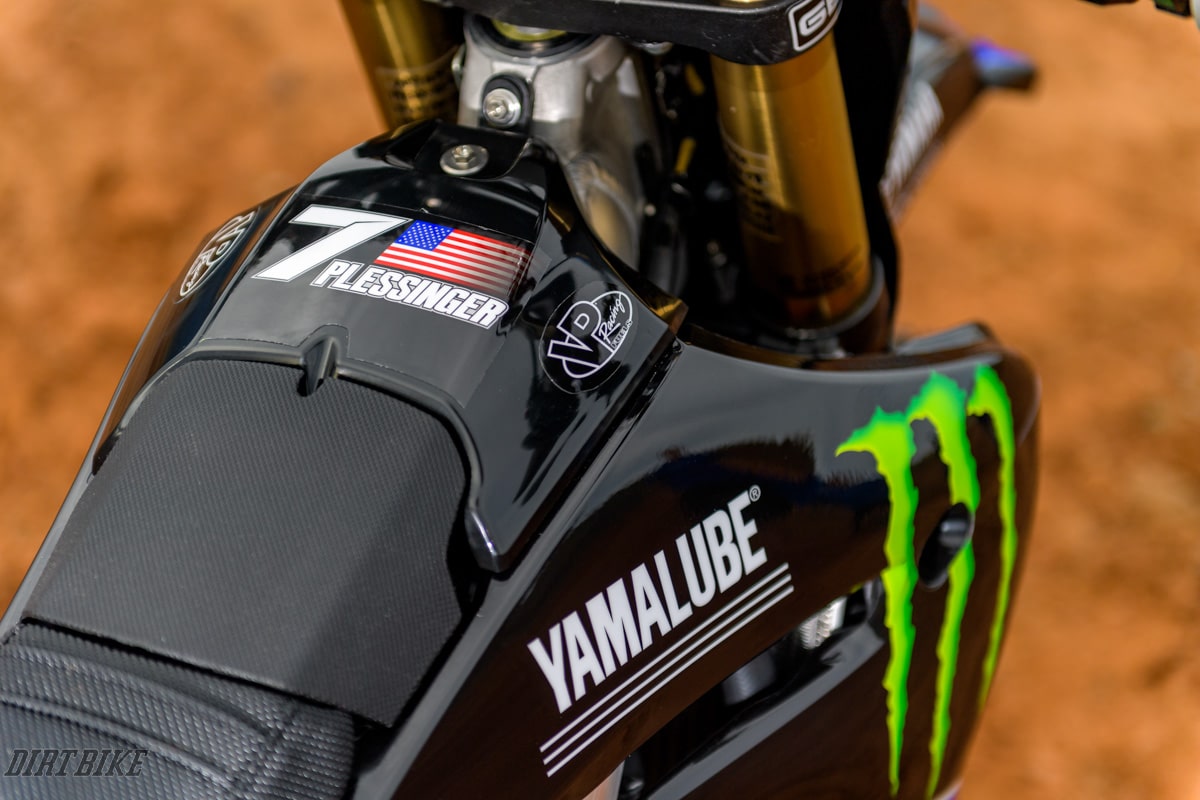 Aaron Plessinger will be making the step up to the 450 class, and he will be inheriting the number 7 from James Stewart, thanks to his 2018 250 Outdoor National Championship. His bike will be similar to Barcia’s. Aaron is another rider who missed some of the off-season with a back Injury. The Star Yamaha Racing team will again be handling Yamaha’s 250 class efforts. Colt Nichols, Mitchell Oldenberg, Dylan Ferrandis and Justin Cooper will be riding in 2019, with Nichols and Ferrandis at A1. 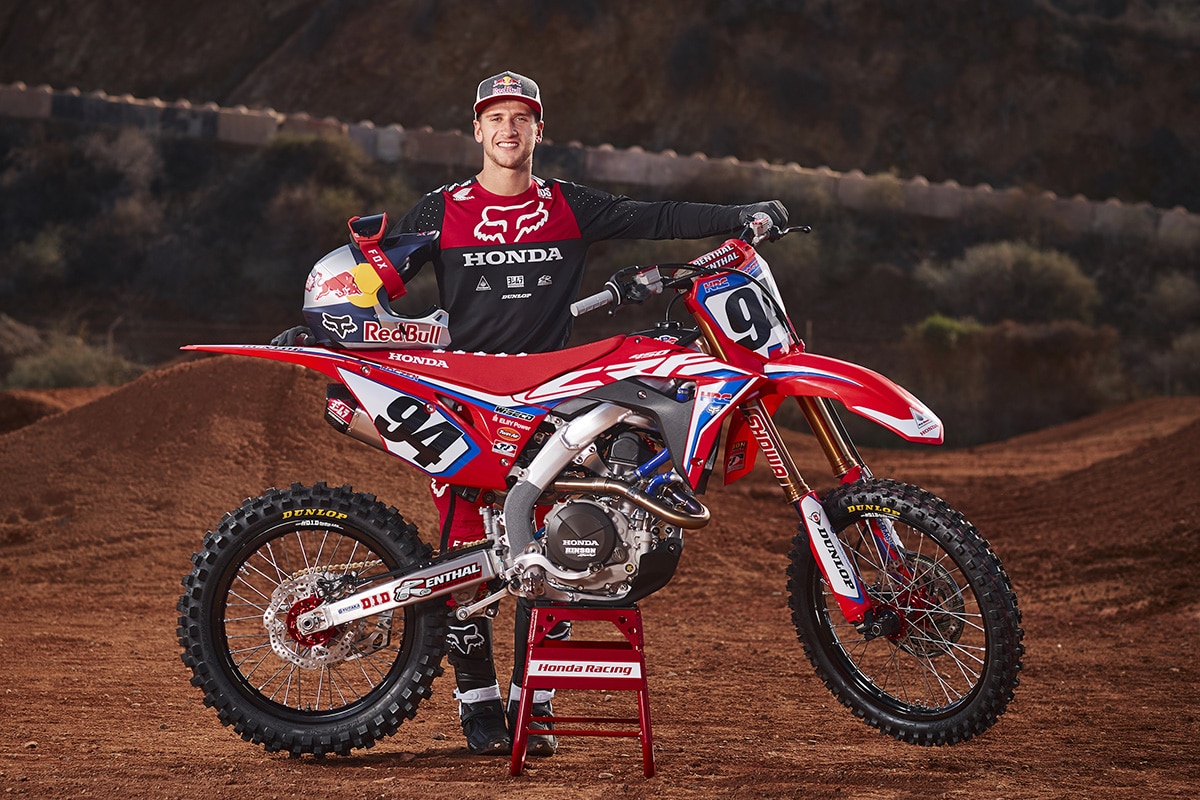 Ken Roczen is back on Honda and said to be healthy. He will be riding with Cole Seely again, who is also in one piece. For a closer look at his HRC Honda, click here. In the 250 class, the Geico Honda team has Jeremy Martin, Christian Craig, RJ Hampshire, Chase Sexton, Cameron McAdoo and Hunter Lawrence. Martin is still considered part of the team, but he will not ride in 2019 because of complications from the back injury he sustained near the end of the outdoor season. Sexton and Craig are also injured, bu expected to be ready for the east series, where they will join Aussie import Lawrence. That leaves McAdoo and Hampshire to race in the west. 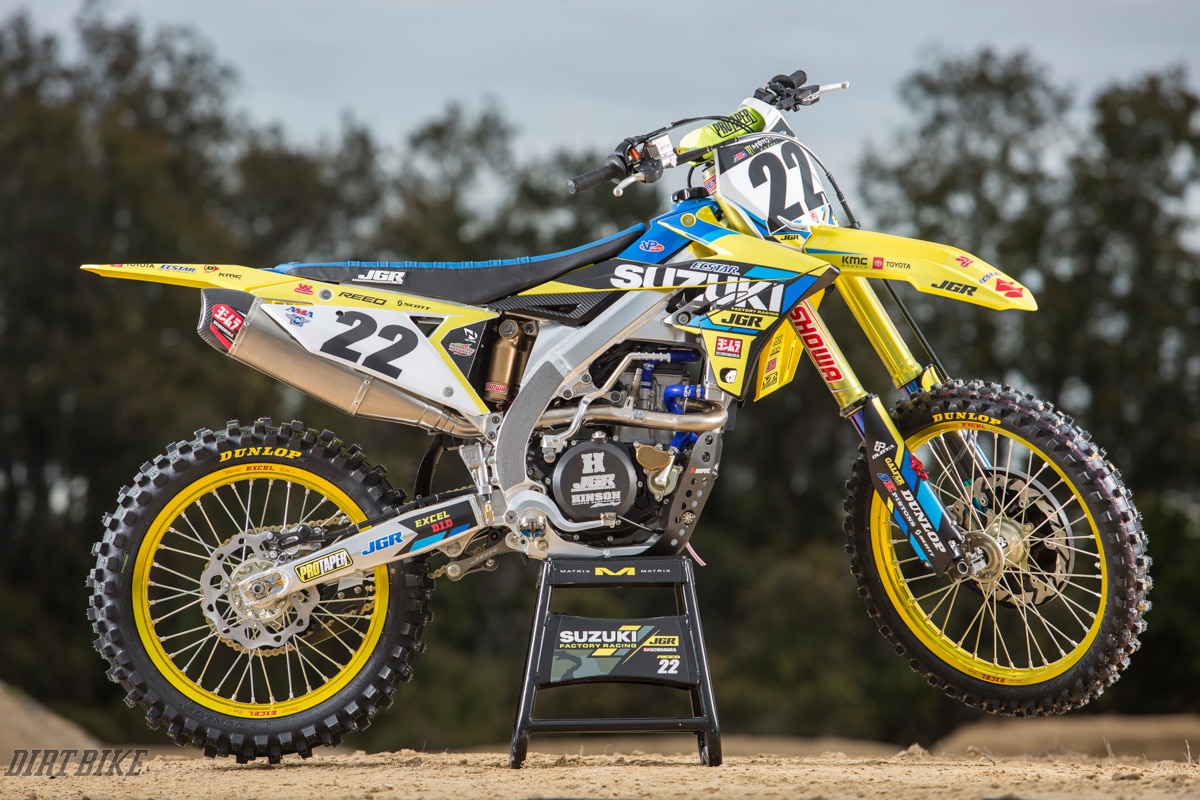 Chad Reed will be leading the JGR Suzuki team in 2018. Justin Hill will be his 450 teammate. They will be easy to spot; they will be the only guys kickstarting their bikes on the start line at A1. Weston Peick is still on the team, but it will probably be some time before he is healed from his Paris Supercross crash. 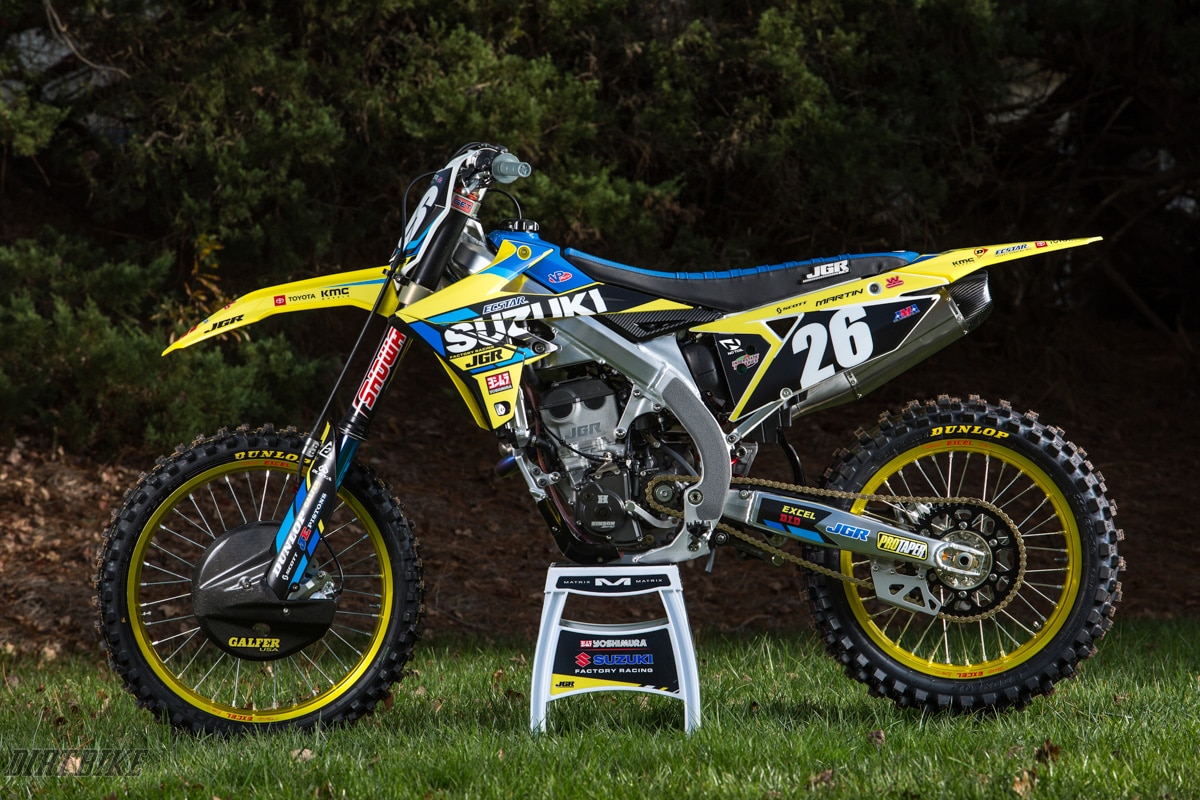 The JGRMX/Yoshimura 250 team will include Alex Martin this year.  Jimmy Decotis, Enzo Lopes and Kyle Peters will be back. Decotis and Lopes will be riding at A1.

Even if the Suzukis do have kickstarters, they are considered among the most effective factory bikes, particularly in the 450 class.

The most interesting aspects of the A1 track are the over-and-under and the two sections of whoops. The forecast has some rain, but it probably won’t be enough to make the track truly muddy. It will probably present the riders with some vision issues.