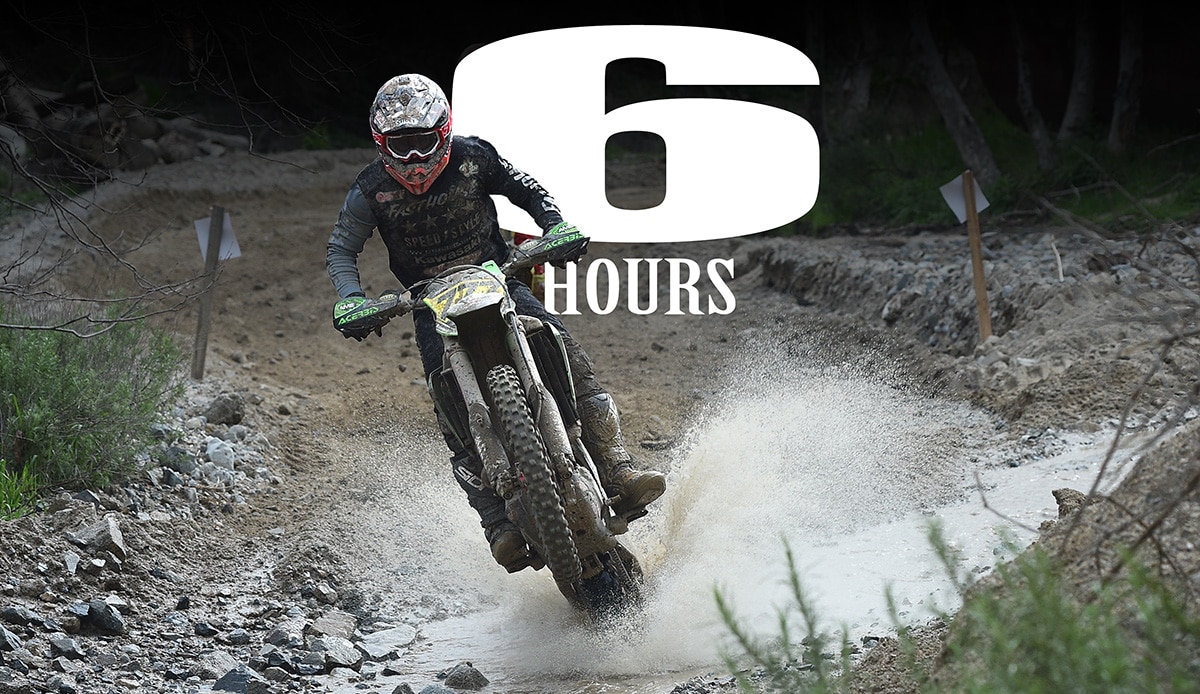 The 3Bros Six Hours of Glen Helen should have been a nice, easy race, with moist dirt and good weather between storms in Southern California. As it turned out, the race was far more demanding than anyone expected. The surface appeared to be dry and solid on the single track around the Glen Helen facility, but weeks of rainfall had saturated the ground so thoroughly that it didn’t take long for sections to turn into Blackwater West. Section after section of the nine-mile course had to be taken out as the race progressed. In the end, it was still a long, challenging course, but a pro lap time was under 16 minutes by the end of the day, where it had been over 20 at the start. Through all the drama, the Precision Concepts team of Blayne Thompson and Dylan Bennett was in control of the race. Blayne got the holeshot and never lost the lead. The Nick Stover/Evan Kelly team stayed within a few seconds in the early laps on a KTM 250XC, leading the 250 Expert class in the process.

Third place overall and second in the 250 Expert class went to the Gravity TM team, which included Robby Schott, Ty Cullins and J Levvitt. They didn’t have the greatest start but came through the pack. Same goes for the ZipTy Racing Gas Gas team of Jacob Alvarez and Trevor Blanton. They struggled with bottlenecks on the first laps and spent most of the race catching up. In the end, they were fourth overall and second in the open expert class. In the overall standings, there was considerable drama late in the race. Thompson’s Kawasaki started running poorly, so they switched to a back-up bike. The same thing happened to Stover. Both teams survived without losing position. The biggest class was the Ironman division where Wes Nemec won. He held the lead throughout most of the race, only dropping back for a few laps in the middle. Zipty Racing organized the Junior Challenge again, with several minicycle teams. Jett Lessing and Lane Forbes finished on top. Dustyn Davis and Tristin Alvarez were second head of Kyle Heald and Brock Smith. Peyton Maas, Louis Lord and Jesse Miller rode a Husky 65 and finished 11 laps, finishing 93rd overall ahead of 32 adult teams. For full results, go to www.glenhelen.com.