In part two of the 2019 off-road buyer’s guide, we focus on youth models. For part one, dealing with full-size off-road bikes for 2019, click here. 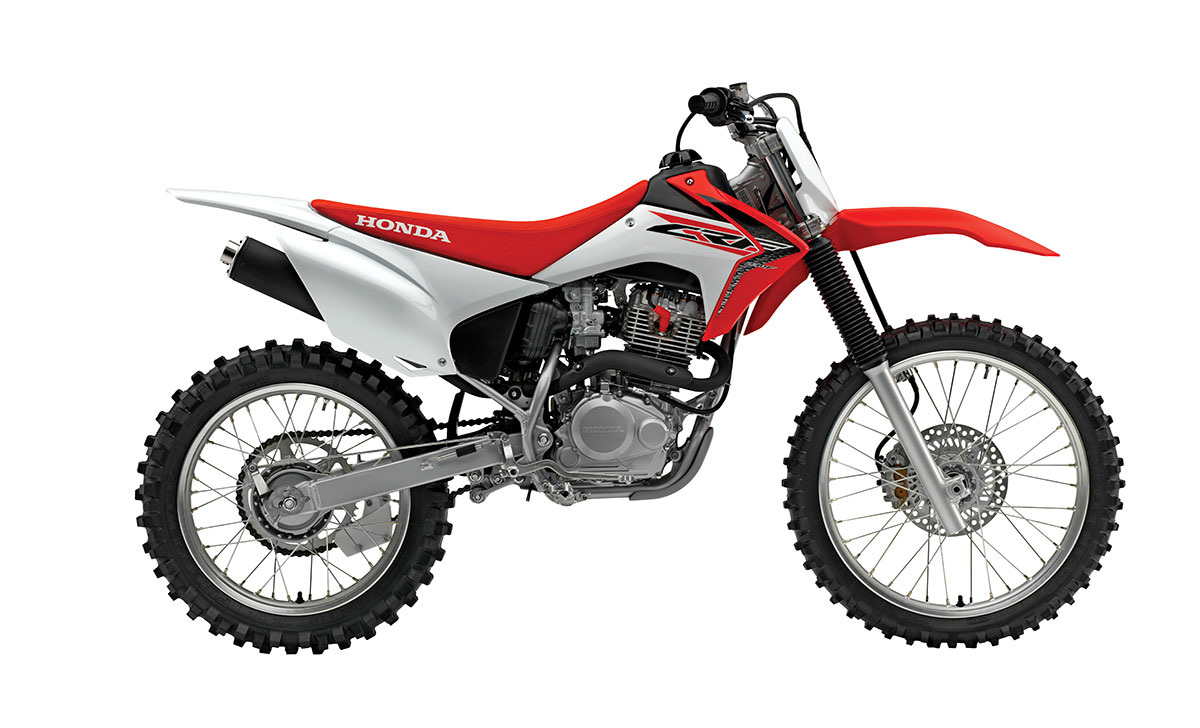 HONDA CRF230F: $4349
Honda brought back this middleweight play bike after leaving it out of the line in 2018. The 230 is old-school and mild-mannered but has a reasonably low seat height for young adults and teens. The technology is straight out of the ’80s with its air-cooled, two-valve engine, CV carburetor and drum rear brake, but the 230 does have electric start. The clutch is manual and the gearbox is a six-speed. In 2019, the bike coexists with the new Honda CRF250F, feauted in part one of the 2019 Off-Road Buyer’s Guide. 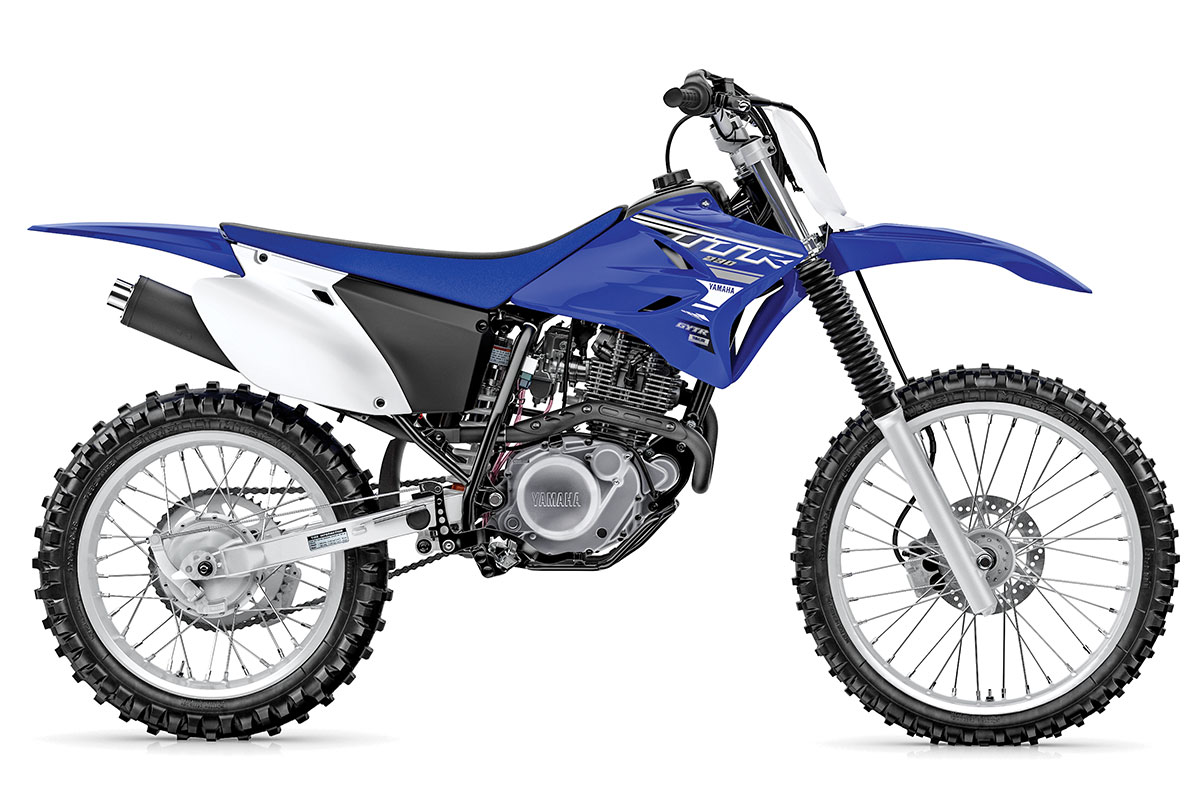 YAMAHA TT-R230: $4399
Yamaha bridges the gap between minis and full-size bikes with the TT-R230. It’s designed to come in at a reasonable price, and that’s why it has a carburetor and is air-cooled. All the tooling has long since been paid off. The bike does have electric start and a six-speed, manual gearbox. The wheels are a full-sized 18/21 combo, but the seat height is around 34 inches. The exhaust is very quiet and the bike is off-road legal. 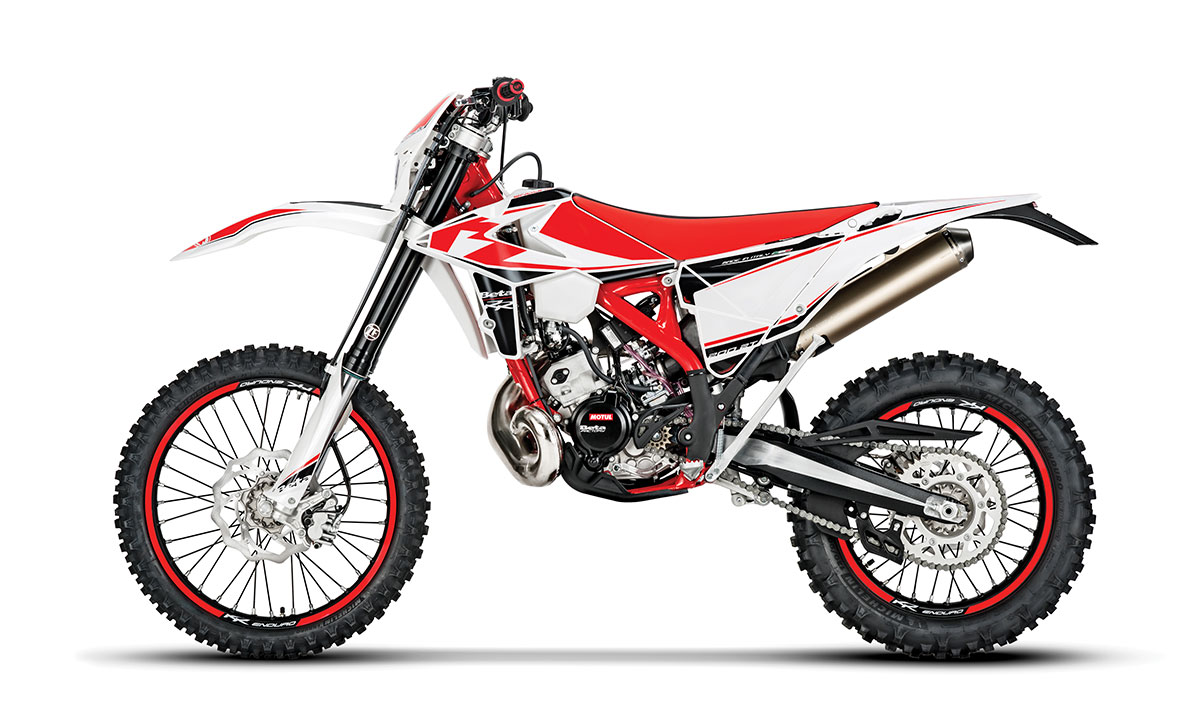 BETA 200 RR (TWO-STROKE): $8399
The 200 class has returned! The Beta 200RR is based on the 125RR, which was new for last year but has increased in both bore and stroke to arrive at 190cc. The 200 also has some features that the 125 doesn’t, like the oil-injection system and electric start. Despite that, the 200 is said to weigh only 8 pounds more. A kickstarter kit is available as an option. The suspension is Sachs. 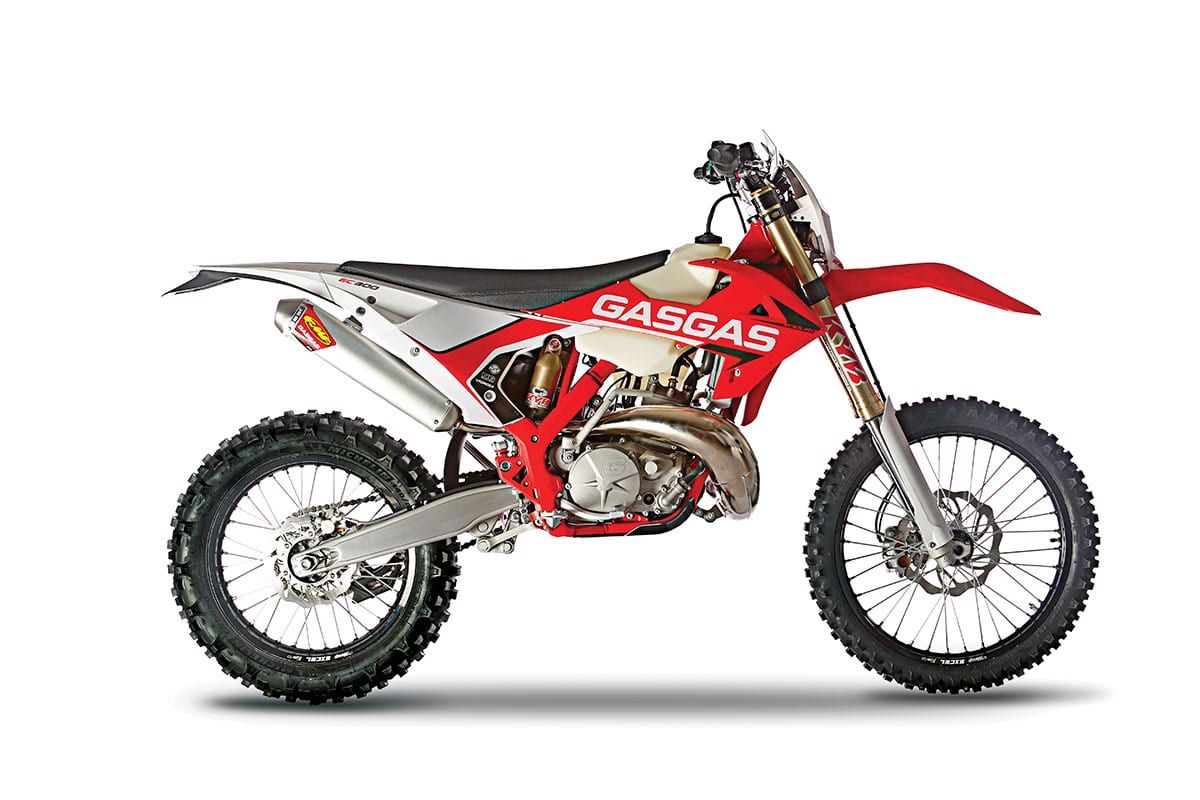 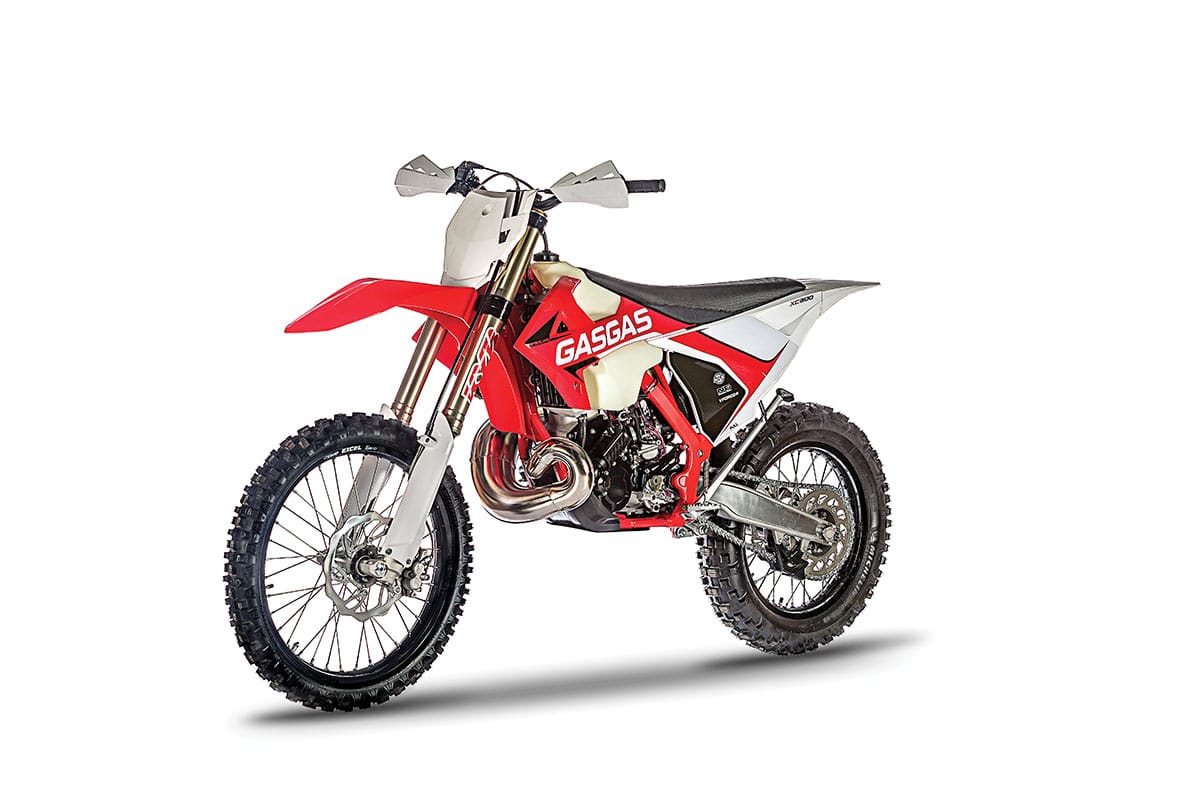 GAS GAS XC200 (TWO-STROKE): $7999
Like the larger two-strokes in the Gas Gas range, the 200 is available in a cross-country configuration. The XC200 has no headlight, but it does get an FMF expansion chamber. The bike comes with KYB suspension, electric start, Nissin brakes and a new 28.6mm Neken handlebar. There are upgrades to the side number plate and graphics, plus it gets the new map switch too. 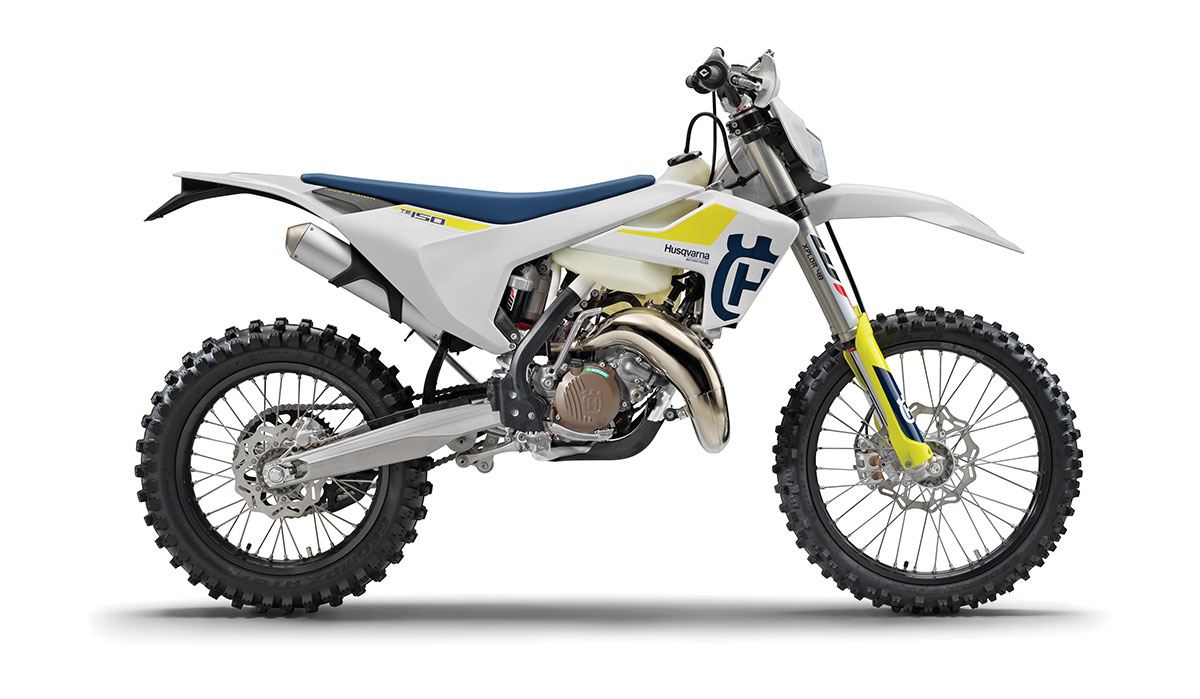 HUSQVARNA TE150 (TWO-STROKE): $8499
This is an off-road bike based on the TC125 motocrosser. The features that separate it from its MX cousin are electric start, a wide-ratio six-speed, a larger bore bringing the displacement to 144cc, softer suspension, a WP Xplor 48 fork, an 18-inch rear wheel, a kickstand, handguards, a headlight and a heavier flywheel. For 2019, the 150 gets a diaphragm-spring clutch and traction control. It still uses a 38mm Mikuni carburetor. 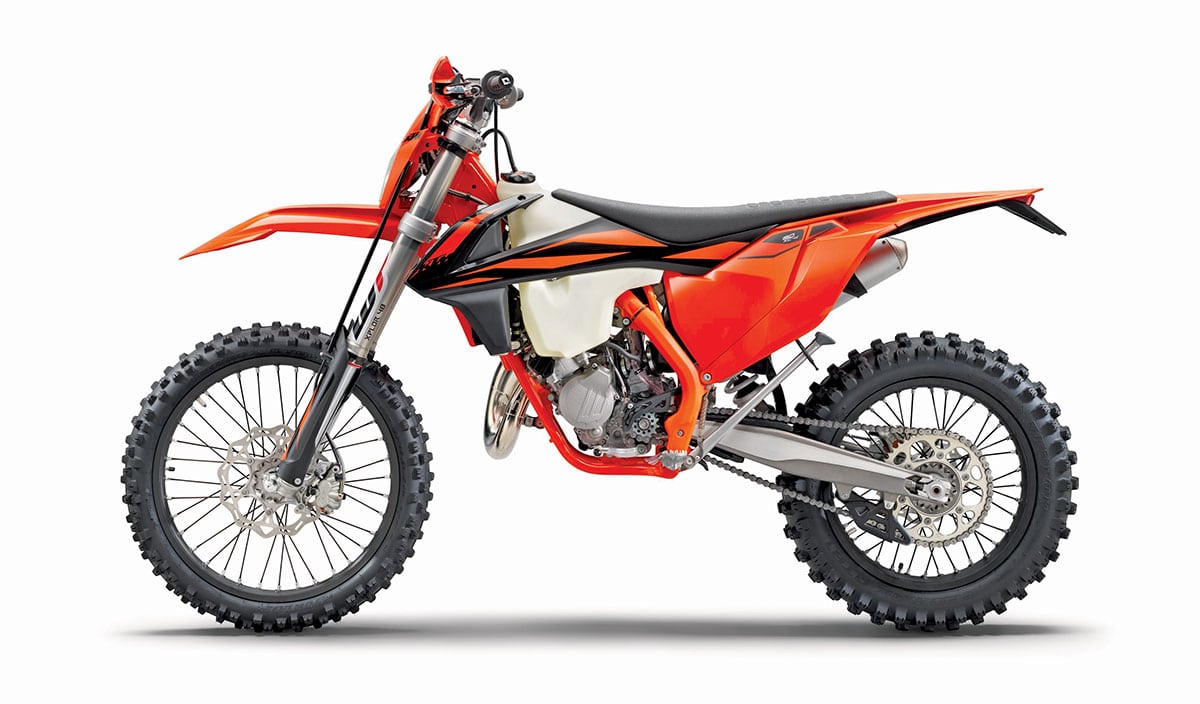 KTM 150XC-W (TWO-STROKE): $8399
This bike is designed to appeal to cult-like followers of the long-gone KTM 200XC-W. It’s actually a very different bike, but in most cases the differences are improvements. The 150 is incredibly light, has electric start and is much more powerful than the old 200. It doesn’t have the smooth low-end torque of the 200, so it isn’t quite as well-suited for true beginners. It has PDS no-linkage rear suspension. 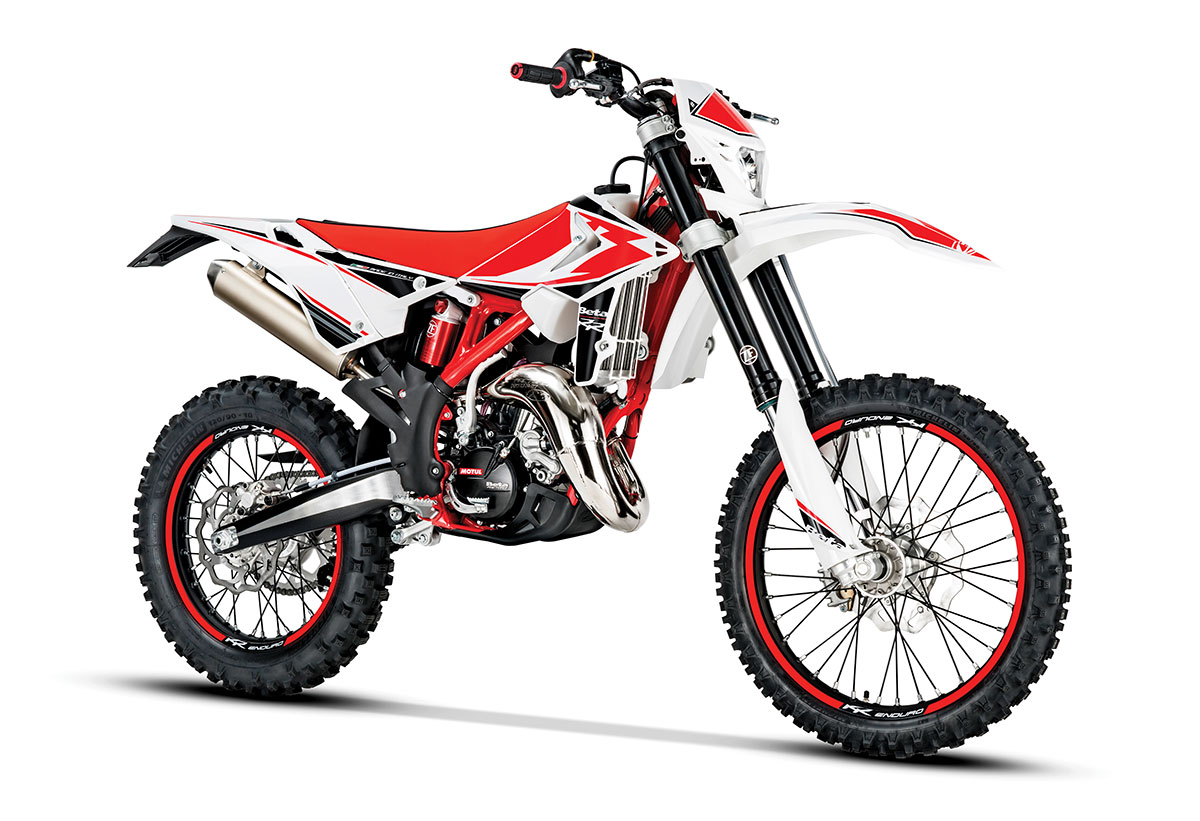 BETA 125 RR (TWO-STROKE): $7999
When Beta introduced the 125RR in 2018, it was an all-new bike, built from scratch, with no grandfathered-in parts from other bikes. It’s a purist’s two-stroke, with no oil injection, no electric start and no battery. Refinement continues in 2019 with a new ECU, a stiffer clutch cover and new suspension. The new ZF Sachs fork has both adjustable preload and rebound damping in the top caps, while the new shock is significantly lighter. 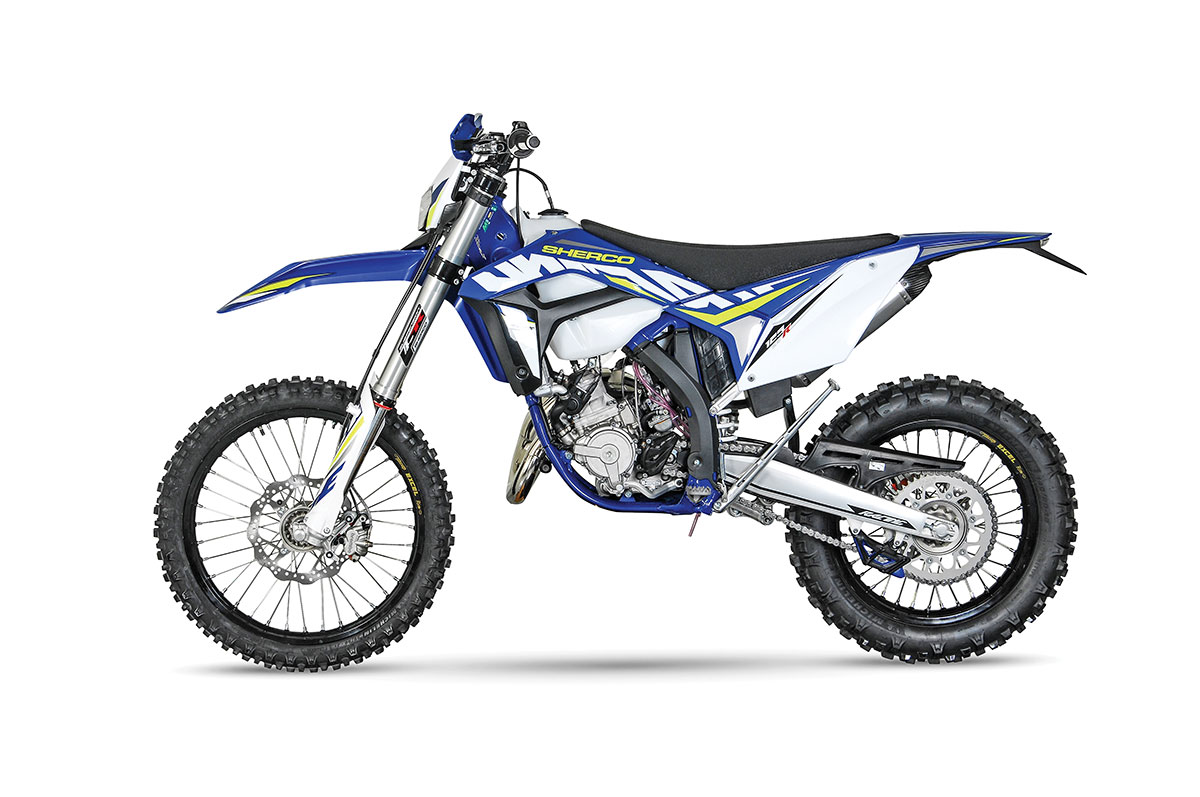 SHERCO SE125 RACING (TWO-STROKE): $8400
There’s clearly a movement back towards 125 two-strokes, and Sherco is a key player. The SE125 arrived late last year with an electronic power valve, a six-speed transmission, electric start and a 36mm Keihin carb. The 2019 model gets a new piston and changes that are designed to result in better crankcase lubrication. A cross-country version will be available for $8600. 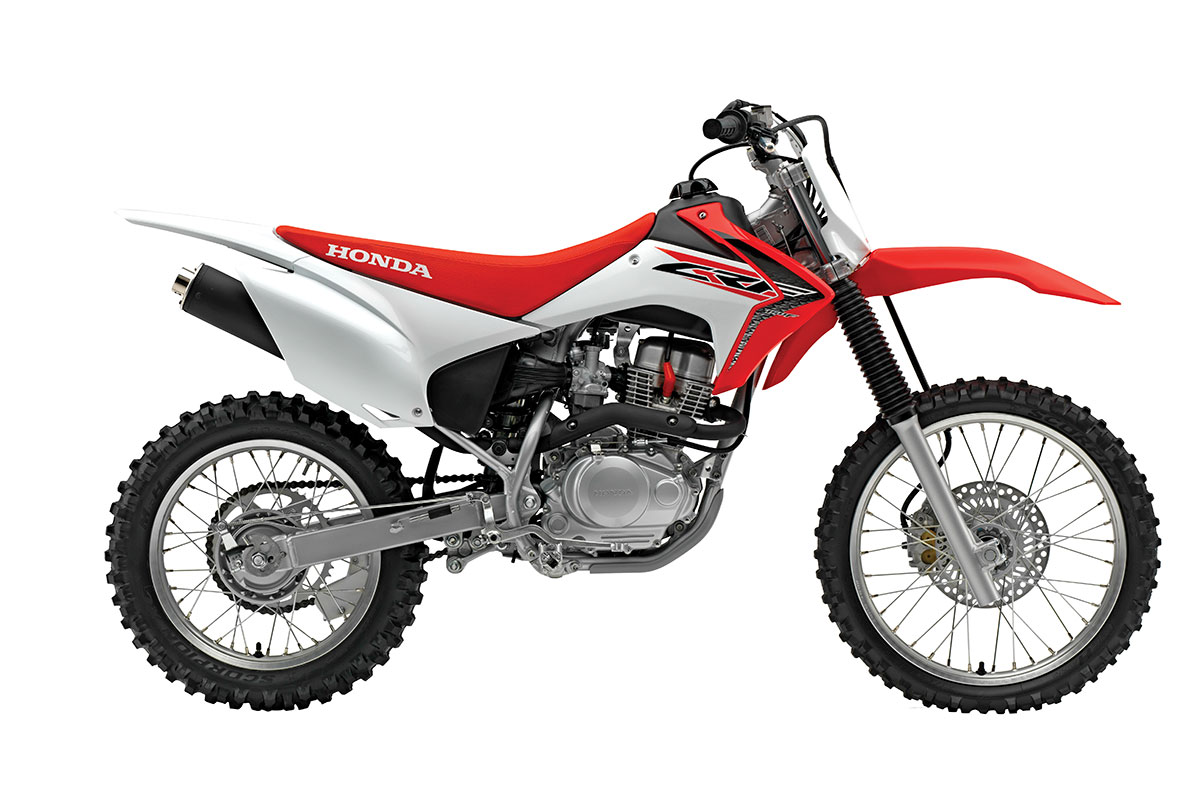 2018 HONDA CRF150F: TBA
In Honda nomenclature, the “F” suffix stands for “Family,” meaning those bikes are designed to get the whole family out riding. The CRF150F is sized for big kids, young adults and women, and has a 16-inch rear wheel with a 19-inch front. The clutch is manual, the gearbox is a six-speed, and the technology is distinctly old-school. It does have electric start. 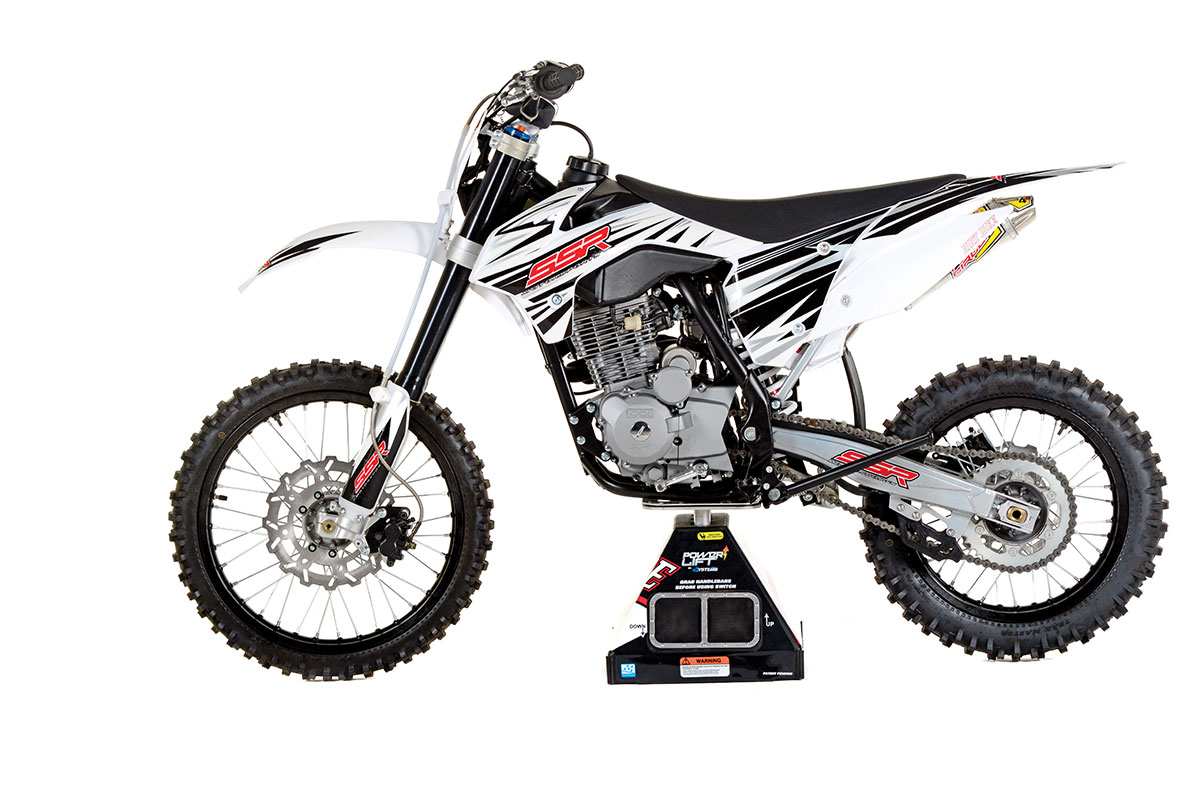 SSR SR150: $1999
SSR offers the most features for the money in this size bike. The SR150 has electric start with a kick-starter backup, a five-speed gearbox, disc brakes and an air-cooled motor that is said to produce over 13 horsepower. The wheels are 14 inches and 17 inches, but there’s also a 189cc version with big wheels. That model has over 15 horsepower and sells for $2399. 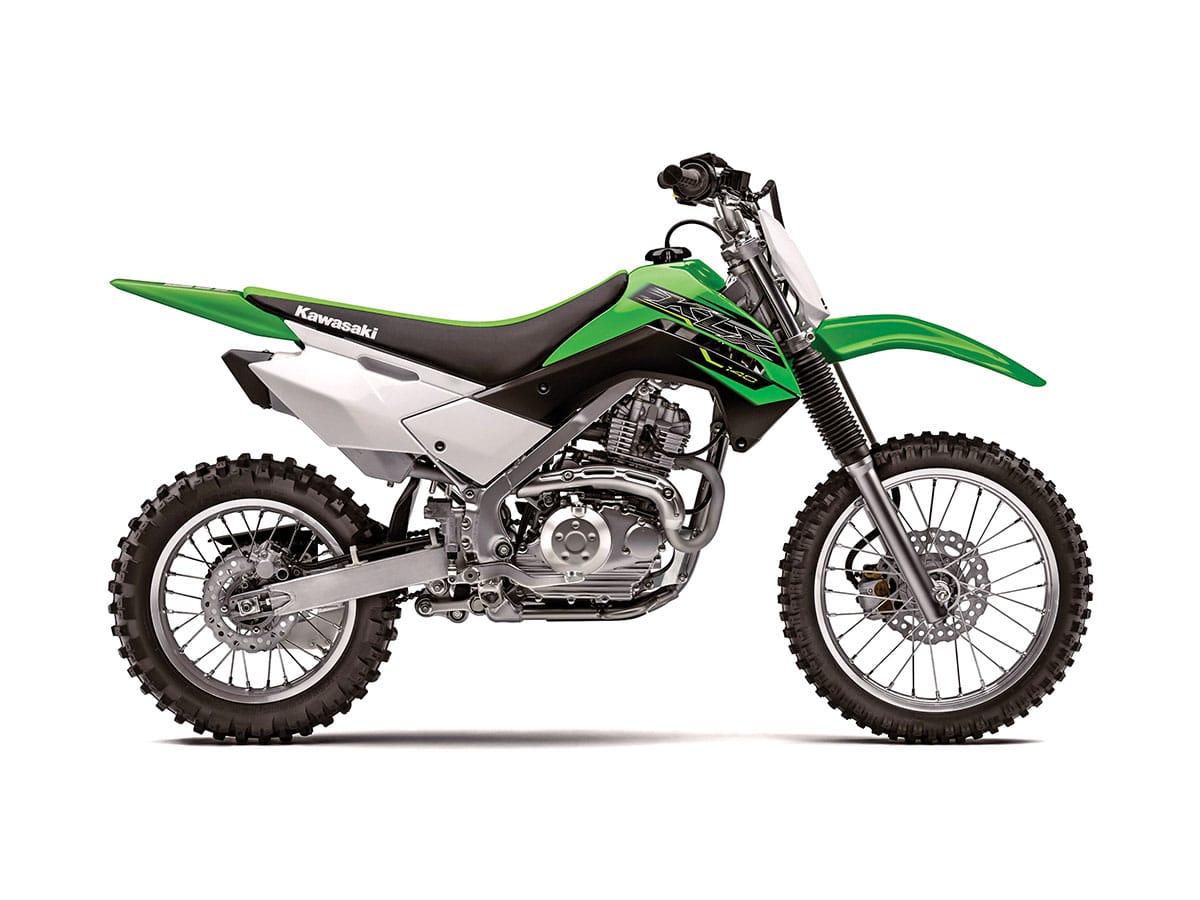 KAWASAKI KLX140: $3099
Kawasaki’s electric-start, 144cc, air-cooled play bike is the biggest and most powerful of the bikes in this class, although it’s still a very tame, entry-level machine. The chassis of the base model has a 14-inch rear wheel and a 17-inch front wheel. The frame is steel with a perimeter configuration and both brakes are hydraulic discs. 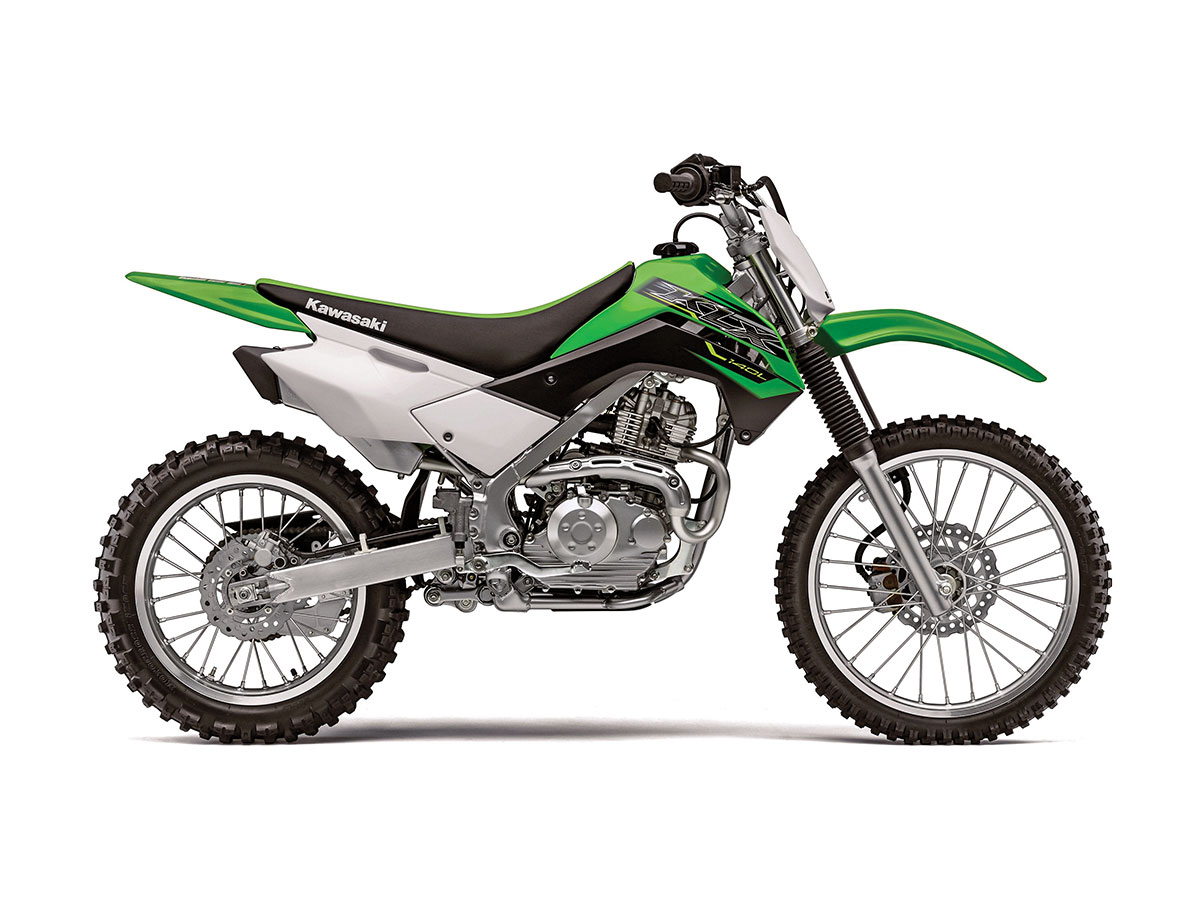 KAWASAKI KLX140L: $3399
The people at Kawasaki like the KLX140 so much that they made it available in three different varieties. If they were labeled like Starbucks drinks, the KLX140L would be the Grande. It has a taller seat height than the standard KLX (we’ll resist calling that the “Tall”), thanks to its 16-inch rear wheel and 19-inch front. Everything else is the same, besides the price. 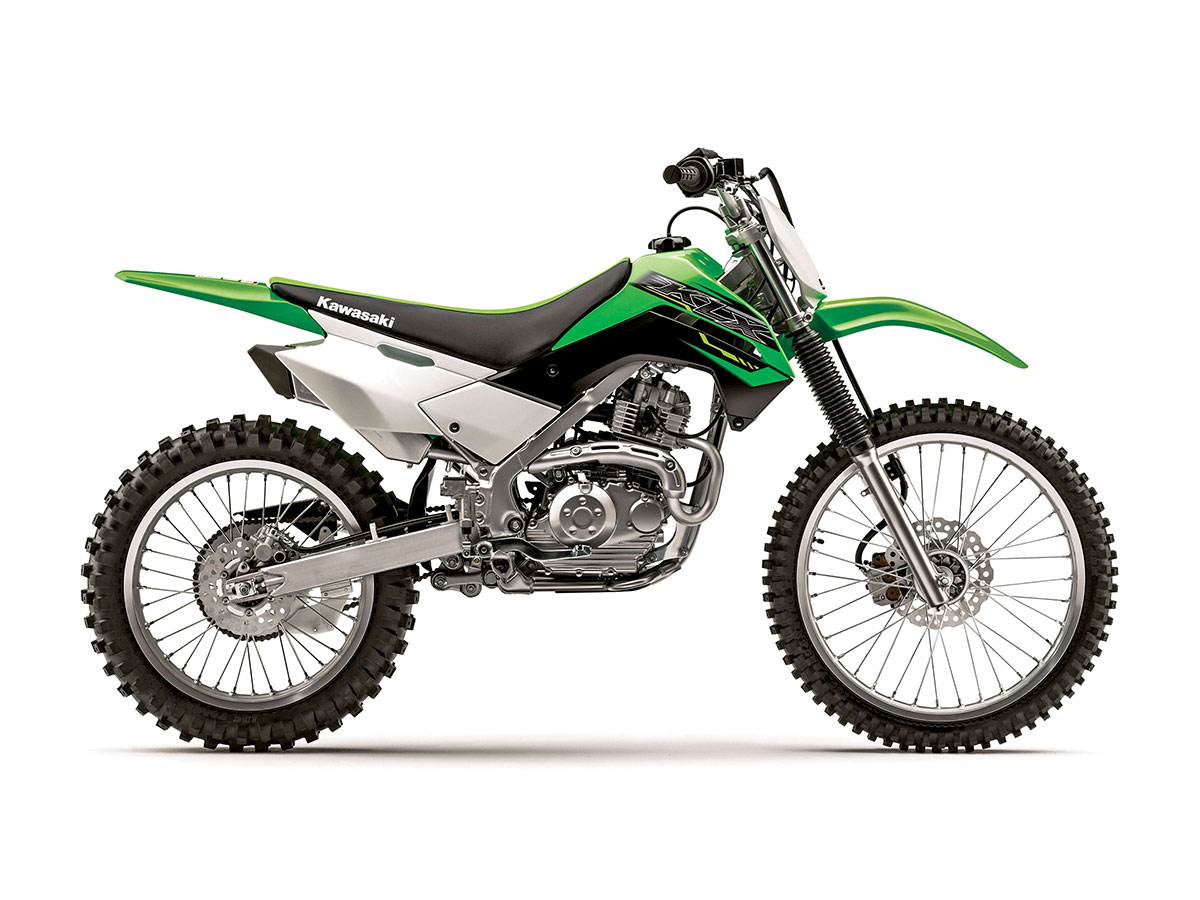 KAWASAKI KLX140G: $3699
For adult-sized riders who have a lot of inseam but don’t have the experience or the desire to ride a full-size motorcycle, the KLX140G is the tallest version of the 140 family. It has an 18-inch rear wheel and a 21-inch front wheel, along with a few frame changes. The seat height is taller than the other KLX140 siblings, but the footpeg-to-seat spacing is unchanged. The motor is also the same.

Honda’s CRF125F got a major redesign for 2019 with a perimeter frame. The bike is still designed for younger riders who aren’t necessarily interested in racing. The motor is an air-cooled two-valver with a four-speed gearbox. The rear brake is a drum, the front is a disc, and the bike has both electric start and a manual kickstarter for backup. There’s also a big-wheel version with a 16-/19-inch combination for $300 more. 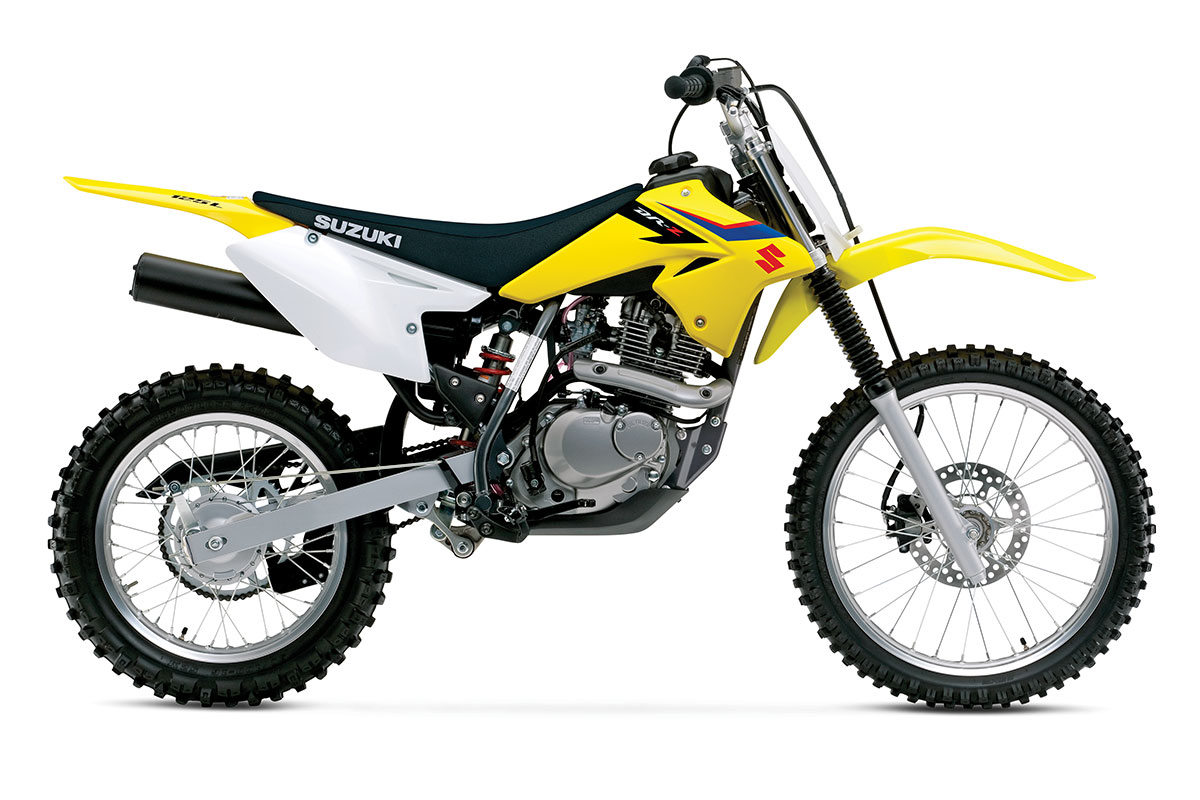 SUZUKI DR-Z125L: $3299
Suzuki has resisted the call of electric start in order to keep the price of the DR-Z125 reasonable. It is one of the few mini cycles still made in Japan, rather than being farmed out to southeast Asia or mainland China. It has a manual clutch and a five-speed gearbox. The DR-Z125 is only available as a big wheel with a 16-/19-inch wheel combo. 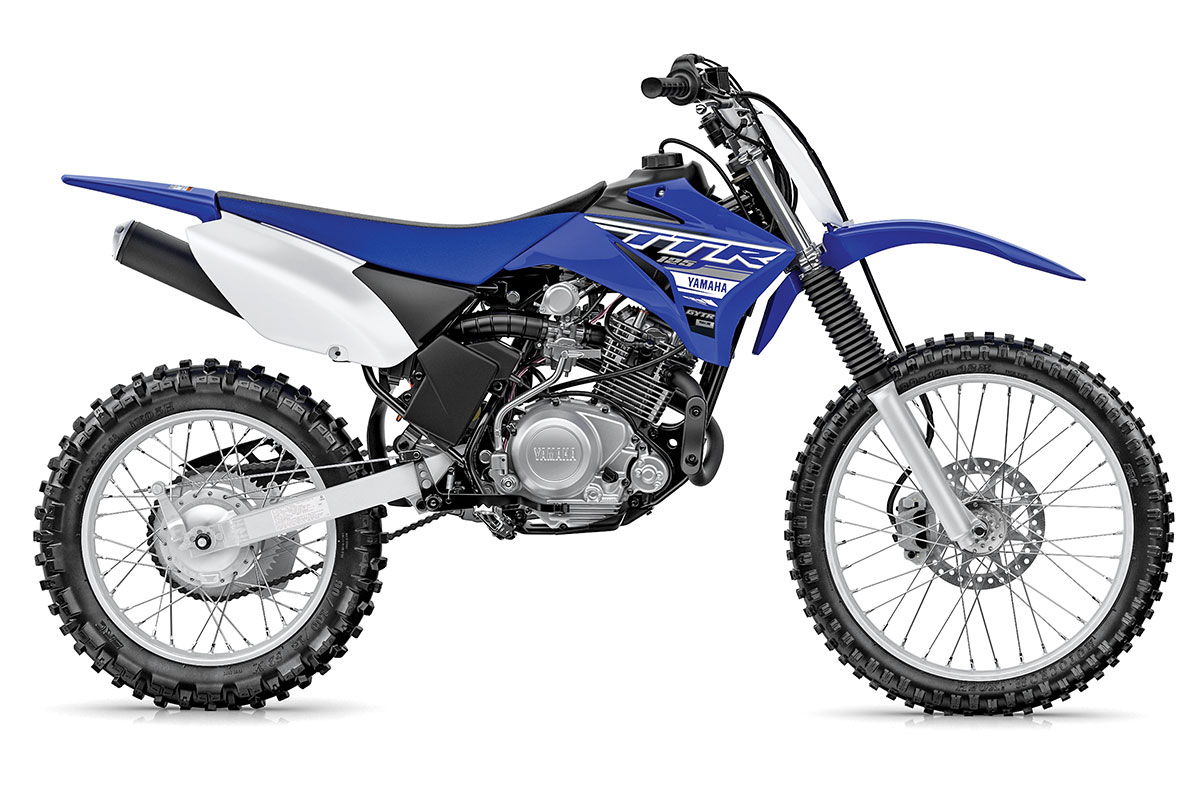 2018 YAMAHA TT-R125LE: $3299
Yamaha once had a whole family of TT-R125s but has whittled it down to this one model, the TT-R125LE. The “L” means it has a 16-inch rear wheel and a 19-inch front wheel, and the “E” means it has electric start. The bike has a sweet, reliable, air-cooled motor with a manual clutch and a five-speed gearbox. It still has a kickstarter as a backup. 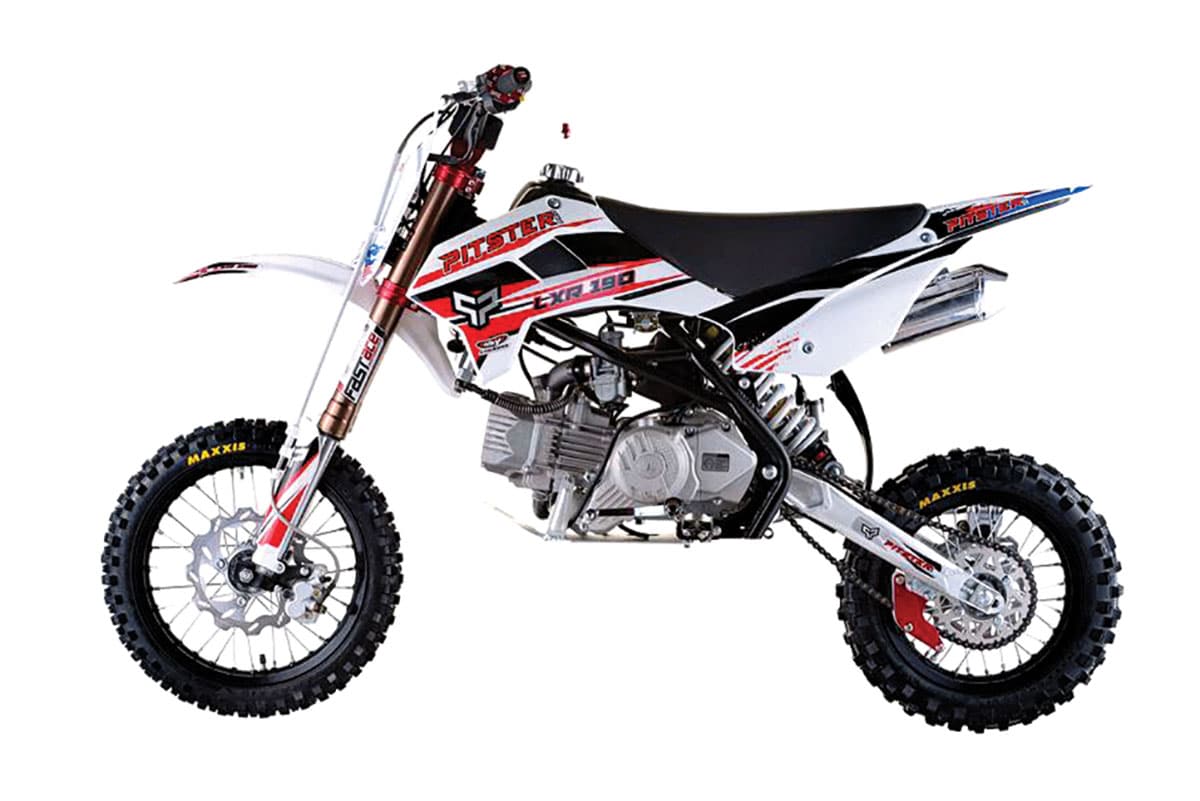 PITSTER PRO MINIS: $799–$2799
No company has embraced the mini and pit-bike market as fully as Pitster Pro. The company offers 10 models ranging from the XJ60, which is comparable to the Honda CRF50F and sells for $799, all the way up to the LXR190F, which is similar to the Honda CRF150F and the SSR SR189.

This bike got a big remake for 2019 with all-new styling and fuel injection. It still has electric start. The clutch is automatic and the gearbox is a four-speed. It has a 12-inch rear wheel and a 14-inch front wheel and is aimed at entry-level riders. 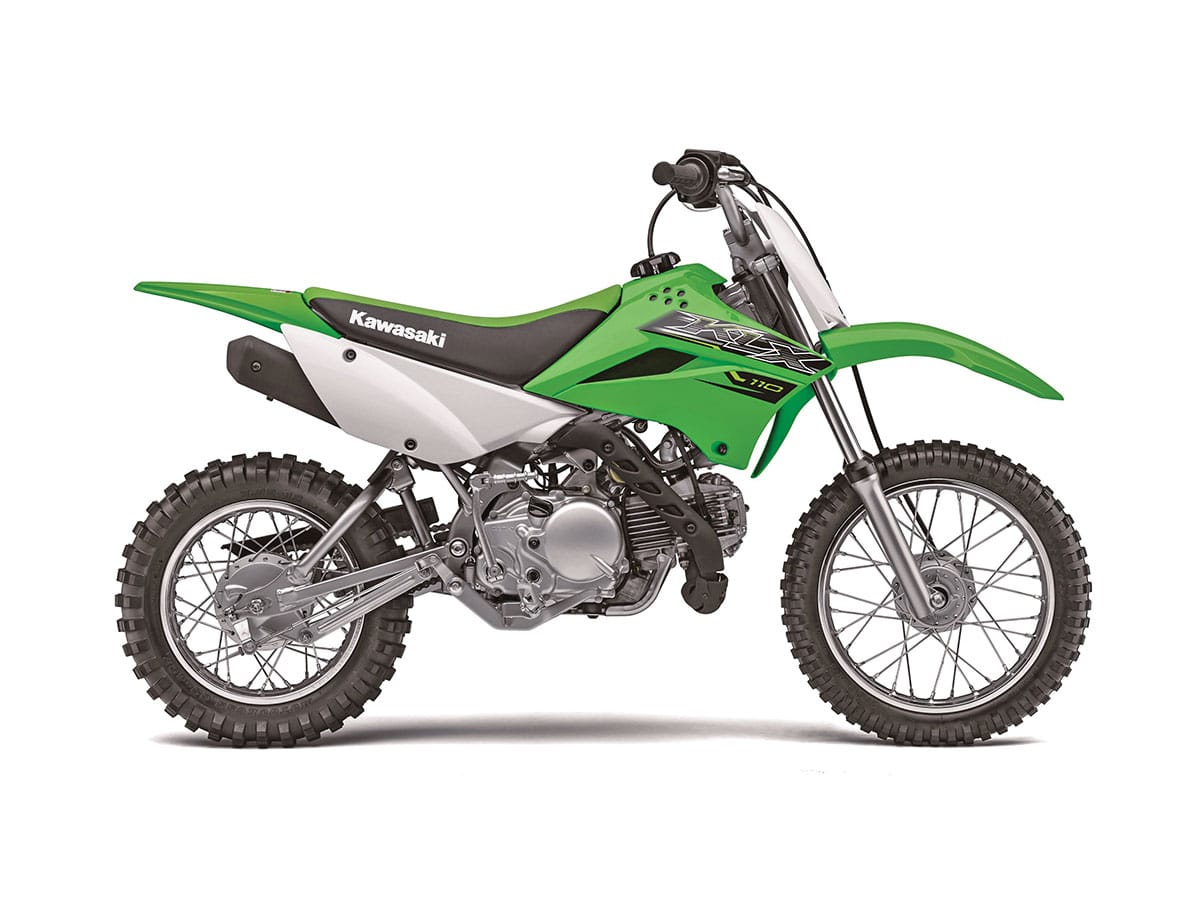 KAWASAKI KLX110: $2299
The standard version of the Kawasaki KLX110 once sparked a cult-bike movement, and the aftermarket went crazy with upgrades. Today, the KLX110 remains popular, although its fan base is mostly kids learning to ride. The clutch is automatic. The gearbox has four speeds, and the seat height is modest. Both wheels have drum brakes. The bike still has an old-school kickstarter in addition to electric start. 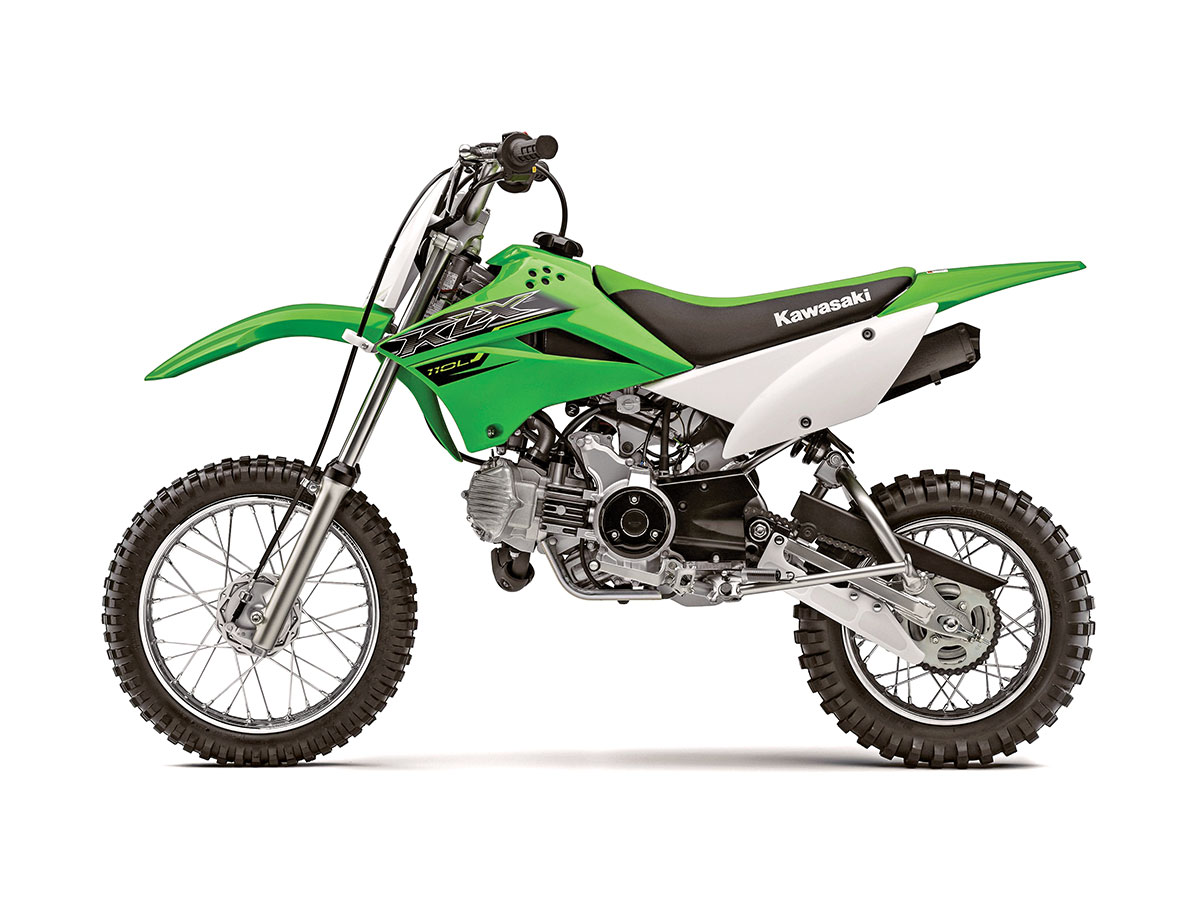 KAWASAKI KLX110L: $2499
Kawasaki says this is an entry-level machine, but we suspect it exists for company executives who race it around in the warehouse after hours. It has a taller seat height compared to the standard KLX110, thanks to an additional inch of suspension travel, plus it gets a manual clutch. It has electric start and still has a kickstarter. 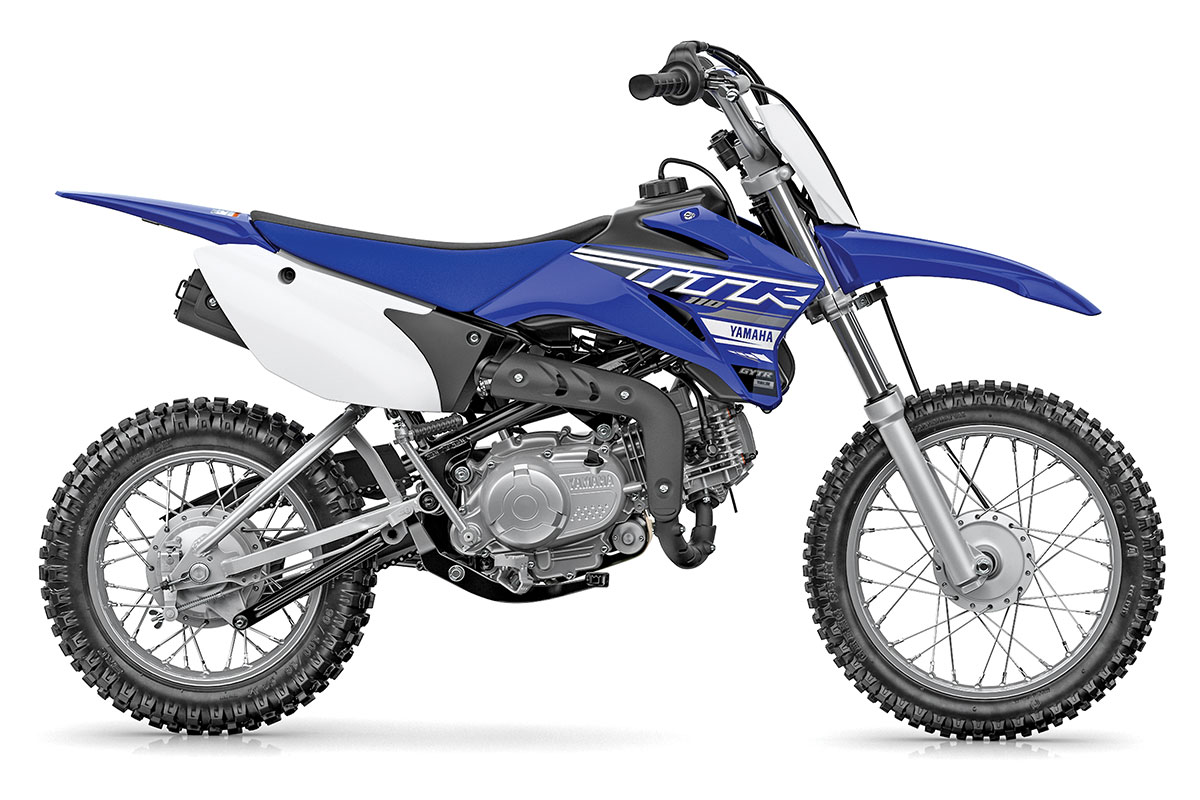 YAMAHA TT-R110E: $2299
Yamaha was one of the first companies to add electric start to a mini, and the TT-R110E has evolved over the years. Now it has a 110cc air-cooled two-valve motor with an automatic clutch and a four-speed gearbox. The wheels are 12 inches in the rear and 14 inches in the front with drum brakes. The seat height is just 26.4 inches. 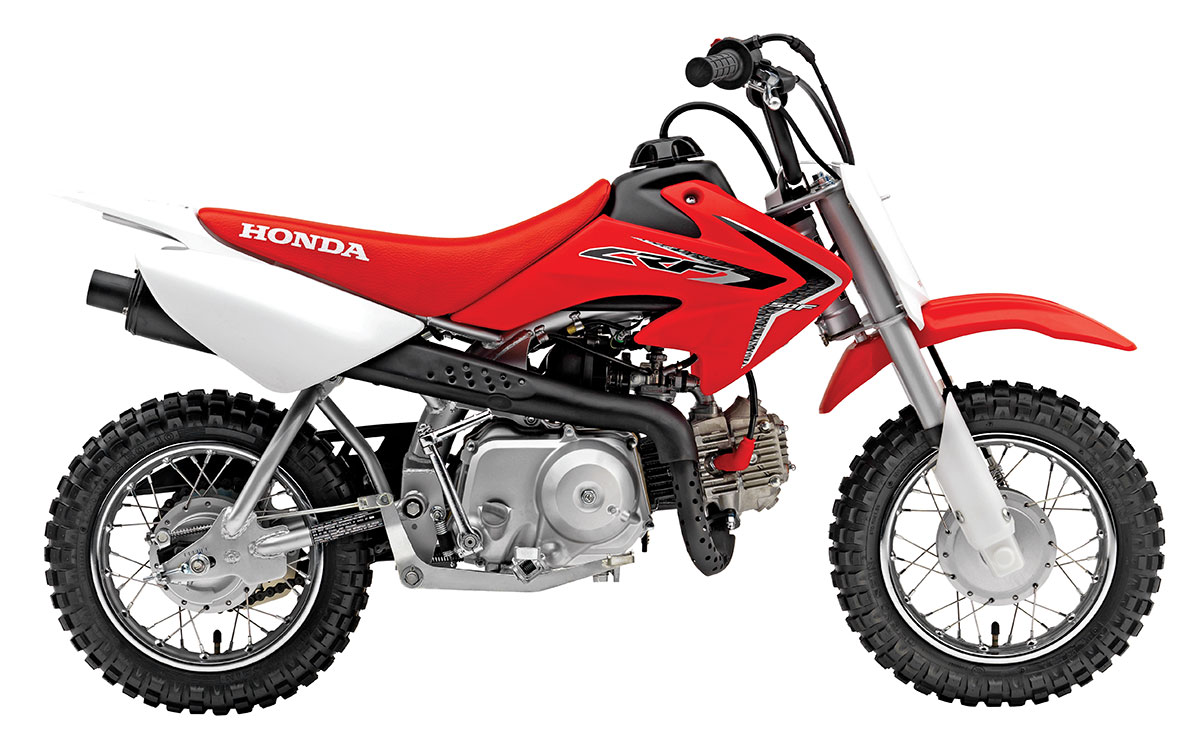 HONDA CRF50F: $1499
Honda has repackaged this bike a number of times over its 50-year history, but it’s still an icon in the mini world. Today’s Honda 50 still has an automatic clutch, a three-speed gearbox and 10-inch wheels front and rear. The short seat height allows first-time riders to feel confident from the start. The bike still doesn’t have electric start, but most parents are fine with that. It gives mom and dad a little more control over the situation. 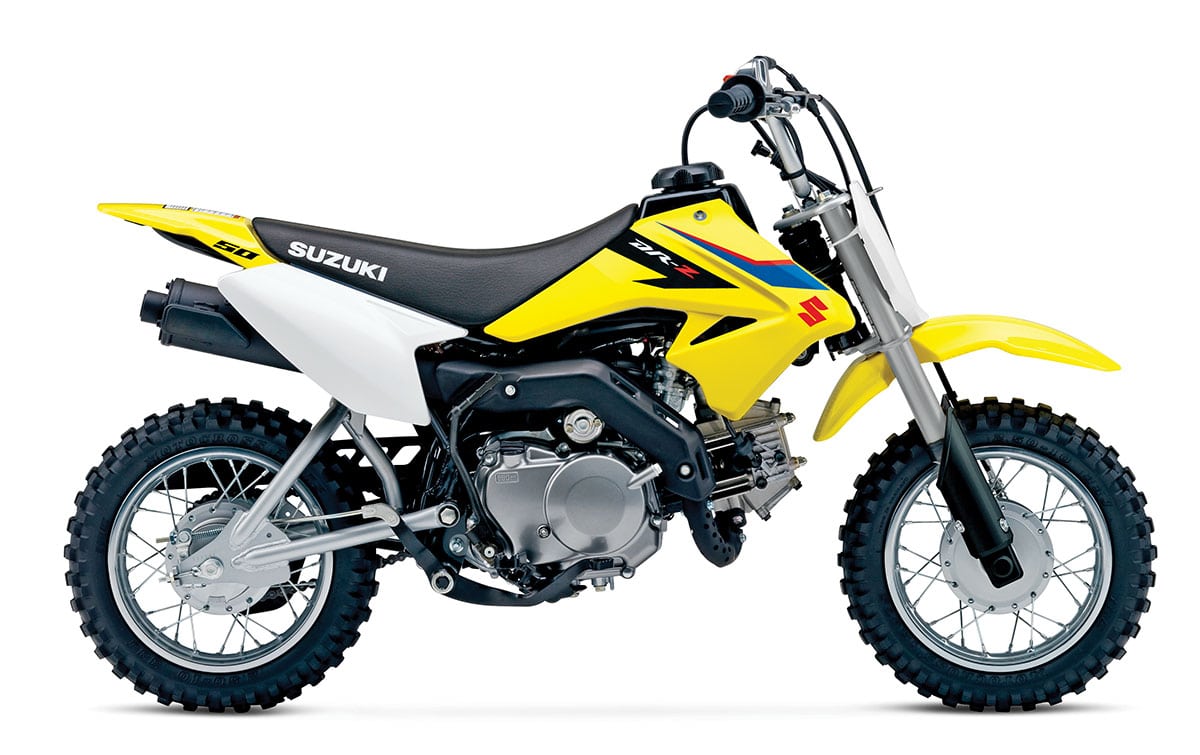 SUZUKI DR-Z50: $1749
Suzuki’s DR-Z50 only dates back a couple of years. It replaced the kick-start DR-Z70 and is aimed at smaller kids. The 50 has electric start, and the 10-inch wheels bring the seat height down to 22 inches. The clutch is automatic, and the gearbox is a three-speed. Suzuki gives this bike a six-month warranty. 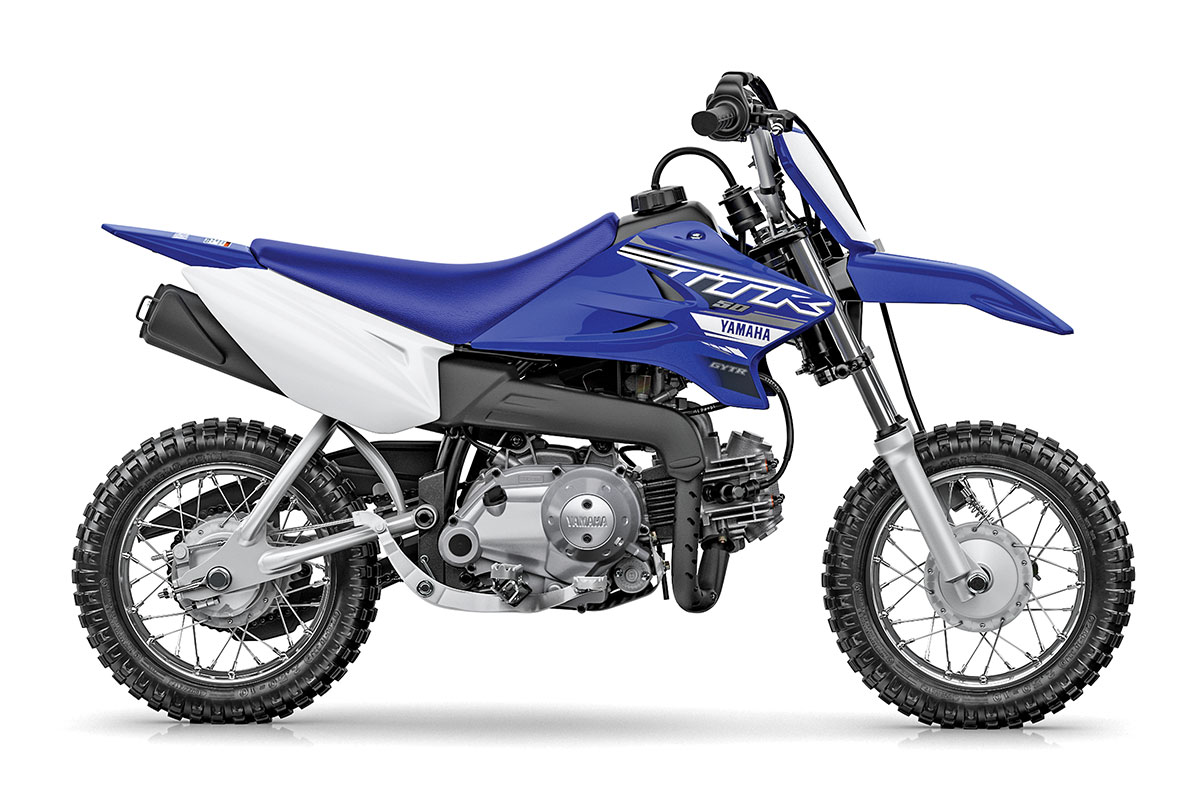 2018 YAMAHA TT-R50E: $1699
Yamaha’s TT-R50 was one of the first entry-level minis to offer electric start. It’s aimed at the same buyer as the Honda CRF50F but has the button to allow any 6-year-old more independence—for better or worse. The wheels are 10-inchers. The clutch is automatic, and the gearbox is a three-speed. Yamaha gave the bike a keyed ignition that can be ransomed for homework. 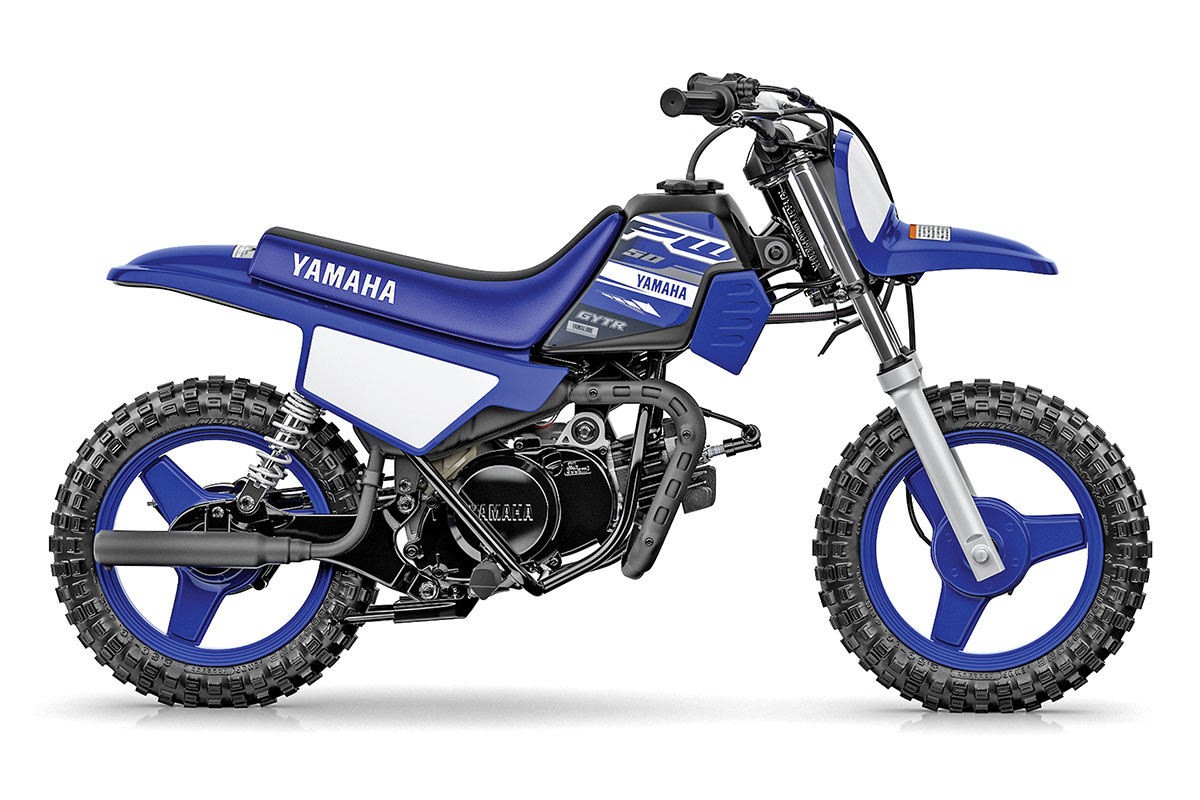 2018 YAMAHA PW50 (TWO-STROKE): $1499
This is the bike that taught most of today’s MX stars how to ride. It might have even taught some of their dads to ride. The Yamaha PW50 has been around since 1981 with its automatic clutch and transmission. The super-low seat height and the driveshaft mean the bike is not intimidating to young riders, and the reliability means most of them are still out there, being passed from one generation to the next.