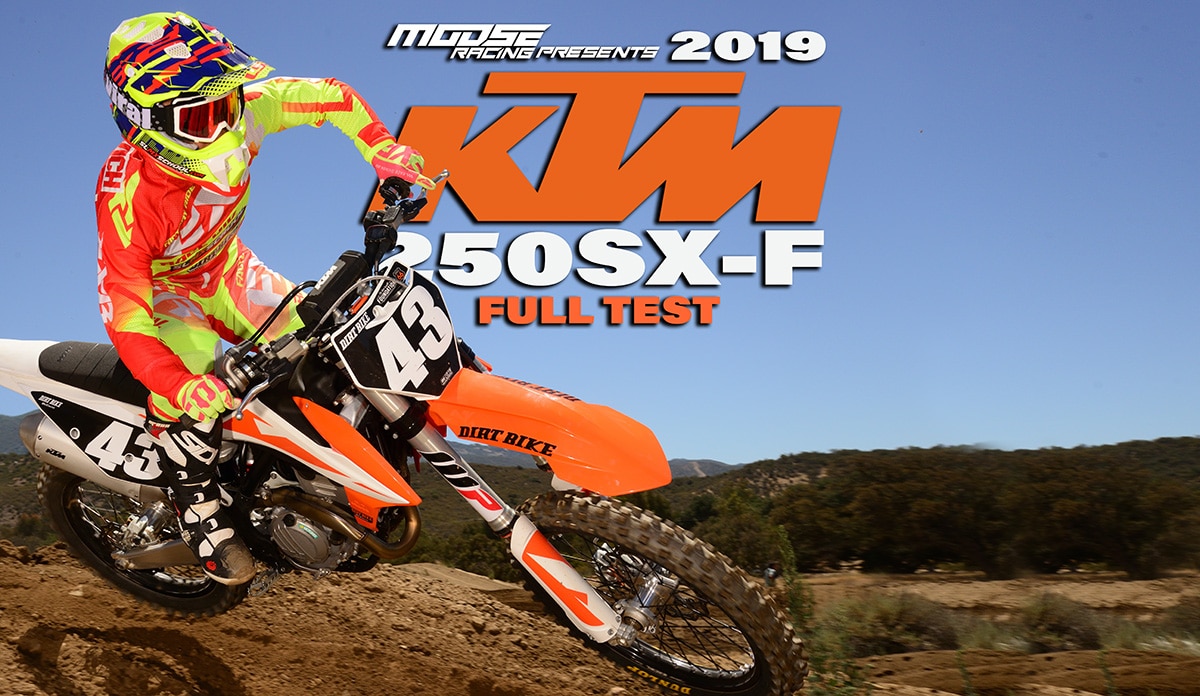 KTM has survived on top of the 250F motocross class for three clear reasons: 1) it’s the fastest; 2) it’s the lightest; and 3) it doesn’t do anything else so poorly to override the first two reasons. The engineers at KTM aren’t dumb, though. They know that other MX bikes are coming, and rather than wait, they decided to start moving now. The 2019 model has a bunch of changes that might allow it to stay ahead of the hounds.

CHANGES ON SCHEDULE
If you know your recent KTM model history, you already expected all the changes lined up for the new 250SX-F. The mid-season release of the 2018 KTM 450SX-F Factory Edition saw a new frame and bodywork along with significant motor changes. All the KTM motocross four-strokes traditionally share chassis parts, so it was only a matter of time before the 250SX-F would look like the 450 Factory Edition. The new frame isn’t exactly like the 450’s, but it’s very close. All the main dimensions are the same, only the parts to make the motor fit are different. That means it became stiffer in the off-season. KTM says it’s 10 percent more rigid torsionally and 2 percent stiffer longitudinally. The new frame places the radiators, which are also new, 12mm lower in the frame. New head stays are made of aluminum. There are also some new brackets on the frame that make it possible to add a glide plate. The swingarm is new, too, although it looks pretty much the same. The giveaway is the longer chain-adjustment slot. KTM also gave the bike a longer subframe, mostly to brace up the rear fender better.

The motor looks the same, but it has some significant internal changes. It remains an electric-start five-speed with a short stroke and a counterbalancer shaft. The biggest change is the switch to KTM’s DDS clutch design, which uses a diaphragm spring rather than coil springs. This was already in place on the 450 and on all the big off-road bikes, and we were a little mystified as to why it wasn’t previously on the 250SX-F or 350SX-F. KTM used to say the clutch demands were different on these two motors, but now they apparently have all the bugs worked out of the design. The bike still uses a Brembo hydraulic clutch master cylinder and slave cylinder.  Another invisible change is the supplier for the gearbox, which is now Pankl. What this means, besides being evidence of an Austrian vowel shortage, is that KTM is becoming more vertical in its manufacturing philosophy. KTM’s parent company owns Pankl, as well as WP, which manufactures the suspension, frame and radiator.

All the bodywork is new, although not dramatically different in overall lines. The biggest suspension change is in the WP AER 48 fork. It has a smaller air volume in its balance chamber now. This is the chamber that opposes the main air compartment. Most riders don’t know it’s there because it isn’t externally adjustable on the WP fork; it’s self-charging as the fork moves through its travel. The recommended pressure in the main chamber is unchanged at 156 psi. The remaining new items aren’t world-shaking. The frame is gray, and KTM now sells the bike with a large plastic triangle/kickstand that can be placed on top of the front tire and used as a brace to keep the fork from being overly compressed during transport.

IS IT STILL ON TOP?
We don’t yet know if the KTM 250SX-F will be the fastest production 250 four-stroke of 2019, but we do know this: anything that beats it will be insanely fast. The KTM makes amazing top-end power and revs like crazy. If you know how to hold a bike wide open, the KTM has a top-end punch that can’t be beat—not yet anyway. This hasn’t changed at all for 2019. We do believe that the bike has gained a little through the midrange and bottom. There were changes to the pipe and the mapping that were aimed at this, and we have to say it was clearly needed. We still wouldn’t say this is a low-end bike. You have to hold it wide open and wait to get the most out of the bike.

As we’ve pointed out before, the KTM’s powerband isn’t narrow. It actually makes good usable power over a broad range—at least broad by 250F standards. It’s just that the range starts late and ends late. There’s a learning curve required to fully indoctrinate a rider to the 250SX-F world. On day one, he revs it like a normal bike and comes home disappointed. On day two, he discovers that there’s a whole new world of horsepower that takes place after his previous shift points. On day three, he’s adjusted to life above 10,000 rpm, and it will be tough to ever go back.
Novices and beginners might struggle with this way of living, and many change the final gearing dramatically. Going to a 13-tooth countershaft sprocket (from the stock 14) isn’t unusual. Looking to the handlebar-mounted map switch won’t do much for you. The difference between the soft map and the aggressive map is noticeable if you test them back to back. But, if someone else sets the switch, you’ll have only a 50/50 chance of guessing which one it is. Traction control is more noticeable, but most riders like it turned off. Launch mode, on the other hand, is dramatically noticeable and shouldn’t be used until you invest time practicing with it.

THE SPRING THING
KTM still has us contradicting ourselves when it comes to air suspension. We already went on the record saying that air forks are a passing fad. Yet, we love this air fork. The WP AER 48 is simple to adjust, nearly maintenance-free and it works well everywhere. At first we loved it simply because it replaced the universally loathed WP 4CS. After the honeymoon was over, we still liked it, and KTM has improved it with every generation. For 2019, the fork is a little more expert-oriented than before. It rides higher in the travel, which is good for going fast and not so good for going slow. In general, you can get away with lower air pressure than before for natural-terrain tracks. But, don’t go crazy. If the front end rides too low, the rear suspension struggles with braking bumps.

Overall, the KTM’s handling is excellent because of one overriding trait—it’s light. You feel like you can get away with anything and recover quickly. That makes you less reluctant to really commit; in other words, it makes you a better rider. This year the bike didn’t lose any weight, but it didn’t have to. At 218 pounds without fuel, it’s already the lightest bike in the class by a big margin. While we still haven’t put any other 2019 250Fs on our scale, we’ve seen the figures and know the others only got heavier. The KTM, on the other hand, might feel even lighter than it really is because of the narrower bodywork and the lower radiators that come on the 2019 model.

WORKING MAN’S MOTO
The days when KTM had the only electric starter, the only hydraulic clutch and the only top-quality handlebar in the motocross world are rapidly coming to a close. For now, though, it’s the only bike that combines all those things in the 250 class with the lightest weight, the most power and best brakes. It’s an overwhelming package. Will it stay in front of all those who are trying to hunt it down in 2019? Stayed tuned.      http://www.ktm.com