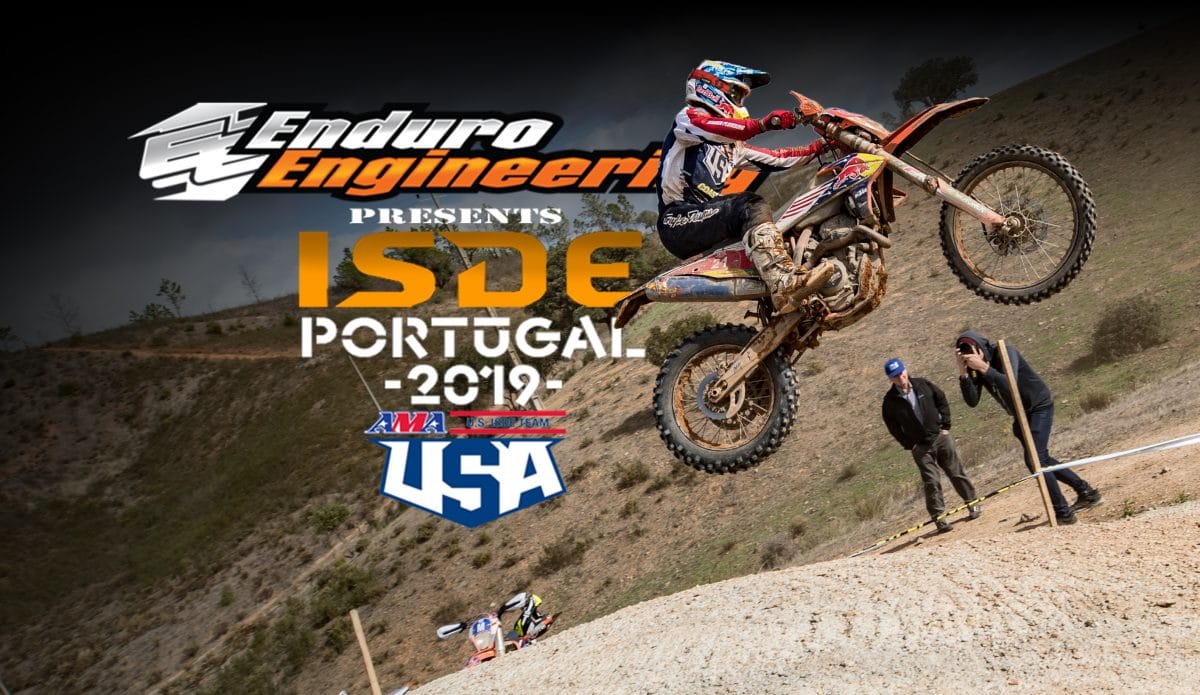 Day three of the 2019 International Six Days Enduro here in Portimao, Portugal threw a lot of different elements at them today, including very slick conditions after a bit of rain to start the morning off, the top thirty or so trophy riders getting lost early in the day and then the day getting cut short for the club team riders. On top of all of that, the progressive standings changed for some of the different classes. Here’s all that happened during day three of the ISDE: (for extended coverage of the 2019 International Six Days Enduro, click here.)

Finishing day three of the ISDE is always great news, because that means you’ve survived through the first half of the most prestigious enduro in the world. The midpoint of the week is usually when you start to see the problems happen or for front runners to show face, because if they’ve ran up front for this long it’s probably no fluke. With that being said, as the third day of racing came to an end, a new leader in the World Trophy division emerged. Team USA has pushed up into the lead going into the second half of the race, even with over a one minute gap now over second. Ryan Sipes made up some ground today, as well, moving himself back into second in the E1 class, while Taylor Robert and Kailub Russell continue to fight for the E2 class lead, and Steward Baylor falls back to fourth in E3.

Australia’s Daniel Sanders continues to keep the rest of the team afloat as much as possible by himself, but with two of the Aussie riders sitting outside the top fifteen, there’s only so much he can do alone. Sanders is still, however, leading the individual overall standings by a good margin, over a minute now to Josep Garcia in second.

Third place in the World Trophy standings remains unchanged from day two, as Team Italy continues on in that final podium position. The gap between them and Australia is pretty considerable, about six minutes, but luckily for them so is the difference between them and the Finnish team at just over four minutes. Individually, Davide Guarneri is the top contender from the Italian team, currently sitting eight in the week’s results so far. Both Guarneri and teammate Matteo Cavallo have stayed put in their respective classifications, but E3 rider Rudy Moroni has moved up to third in those standings.

Team Australia is still holding onto their lead in the Junior Trophy division, with over a four minutes lead now over the next closest team. Each of the “Joeys” are still doing well in the individual classification, as well, with Lyndon Snodgrass in 10th overall, Fraser Higlett in 12th and Michael Driscoll up to 22nd now.

The American Junior Trophy team, too, hasn’t moved up or down in the standings so far this week. The team as whole has pretty much kept up a consistent pace over the last three days, which isn’t bad but it has allowed the Aussies to open up over a four minute lead now, which is even further back than yesterday.

Just like the two teams ahead of them, Team Italy’s Junior Trophy division standing has yet to change since finishing day two yesterday. They have a bit of ground to make up if they want to catch up to the American’s, but they definitely don’t have much room for comfort with the French team sitting only 18 seconds behind them. Italy’s lead man Andrea Verona is still having a very successful week, though, as he currently sits third in the E1 standings as well as sixth in the individual overall results.

The American Women’s Trophy team of Brandy Richards, Becca Sheets and Tarah Gieger continue to lead the charge in their division. Although the Australians were able to take the day three victory by a couple seconds, the American girls were able to still maintain their plus-one minute lead now over the Aussies. Team Germany is still falling down through the ranks each day, back now to fifth overall by over fifteen minutes. In Germany’s downfall, Great Britain and and Spain have each moved up to fill the void.

Three days into the ISDE and the XC Gear Club Team from the United States still marches on as the dominating force in the club division. With plenty of moisture soaking the tests early this morning, the slicker slowed the Americans down a bit, but as the day went on and dried a bit, their pace picked back up to their normal speed. The gap between them and the second place Team Lozere AMV 4 (team of current club class leader Antoine Meo) now at about 10 minutes, so with the expected rain in the latter parts of the week the Americans should have enough leeway to remain on top.

THE WEEKLY FEED: THE GLORY DAYS OF MOTO, CRASHES AND HOT NEW PRODUCTS

GASGAS EXPANDS RACING WORLDWIDE WITH COLDENHOFF, BLAZUSIAK AND OTHERS