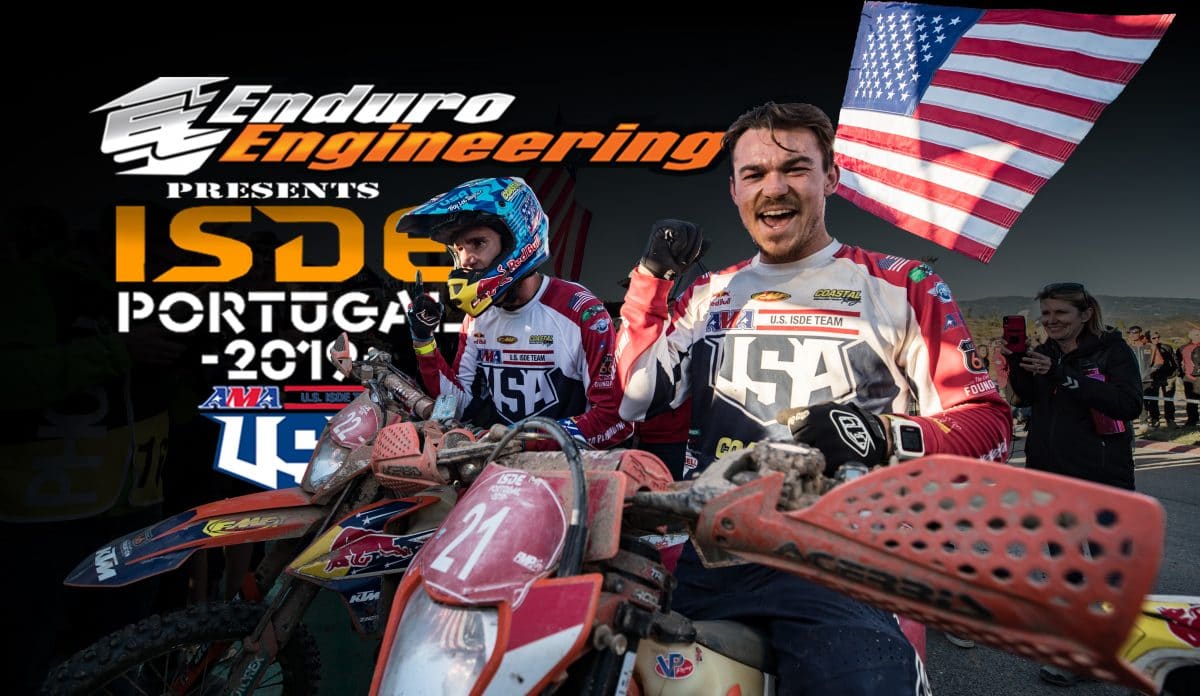 After a long and grueling six days of racing at the 2019 International Six Day Enduro in Portimao, Portugal, the World Trophy, Women’s Trophy and Club Team award all belong to the United States of America, while the top honors in the Junior Trophy division are claimed by the Australians. The overalls were all pretty much decided before even starting today’s final motos, but crazier things have happened that could’ve resulted in things being drastically different. Here’s how the final motos of the sixth day at the 2019 ISDE went: (for extended coverage of the 2019 International Six Days Enduro, click here.)

For just the second time in the last 94 years of the International Six Day Enduro, the United States of America was crowned as the World Trophy champions. Half of this year’s American Trophy Team were also on the team back in 2016 when they first won (Taylor Robert and Kailub Russell), so their was no lack in knowledge of how to get the job done. A slow start to the week almost saw the American’s chances of winning again this year slip away before the half way point, but all four riders (Steward Baylor and Ryan Sipes being the other two) picked up the pace and were able to finish out the week with the victory. Their win didn’t come with ease, though, as they were pressured all week long by the Australian team of Matthew Phillips, Joshua Green, Luke Styke and Daniel Sanders (2019 overall ISDE winner). Phillips’ early retirement from the race put some added pressure on the Aussies to make sure they had no further issues, but that was the last of their problems. By the time the sixth day rolled around, they had a two minute gap to try and close in the final moto, but it was too little too late for the Australian team this year. Behind Australia came teams Italy, Spain and Finland, in that order.

In the Junior category, the stories were almost reversed completely, as the Australian Junior Trophy team was able to see victory at the end of their 2019 Six Days. Building up an eight minute lead by then end of day five, the Aussies had nothing to worry about heading into the final motos other than an unlikely mechanical failure. That didn’t stop the USA’s Junior squad from trying their hearts out in the final motos, though, but it without something drastic they had no chance of gaining back that much time in the short motos. Rounding out the podium was the Spanish team, who capitalized on the Italian team’s misfortune by moving up through the ranks. Portugal and Belgium rounded out the Junior Trophy top five for the week.

The Women’s Trophy team from the USA, Brandy Richards, Becca Sheets and Tarah Gieger also held a large gap over the second place team of Germany coming into today’s final motos, which did relieve some of the stress of finishing out the ISDE, but it didn’t stop Richards from going out and leading the final moto from start to finish. Her win gained her an extra six and a half seconds back toward the lead, but with over a minute gap between her and Germany’s Maria Franke, it just wasn’t enough. Settling for an individual second isn’t as tough when you and your teammates also just won the Women’s Trophy title instead. Great Britain, Sweden and Spain all came in to finish out the top five Women’s teams.

Team USA’s XC Gear Club Team rider Dante Oliveira definitely turned some heads this week and came out with the results to show for it. Winning multiple tests throughout the week and consistently staying in the hunt for the overall club lead were just some of the highlights of the American’s 2019 ISDE. Even at the final motos of the week, he was able to win by a margin of 17 seconds over multi-time World Enduro Champion Antoine Meo, who ended up winning the individual club rider overall. The XC Gear team’s success wasn’t only reliant on Oliveira by any means, though, as Ricky Russell and Austin Walton both were always running up inside the top ten on most tests, even topping the charts themselves.