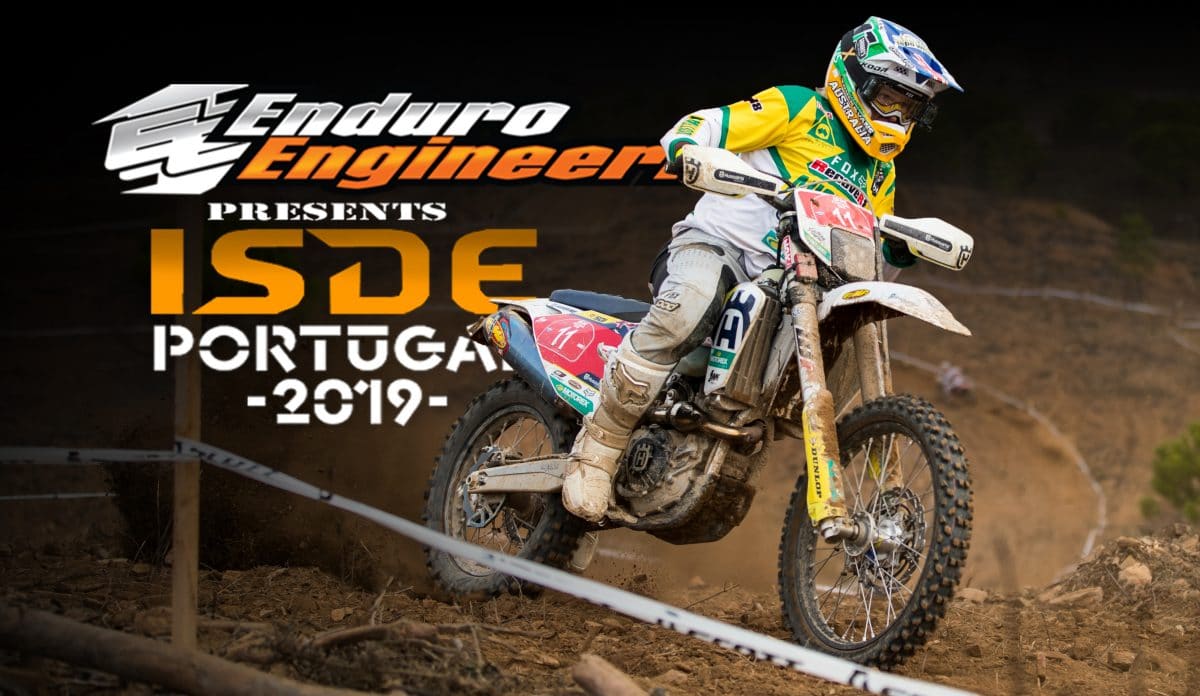 All of the prep is done, the tests have all been walked, so now it’s time for the best riders from around the world to take on the 2019 International Six Days Enduro here in Portimao, Portugal. They all did just that, with day one wrapping up just a few hours ago. Here’s all that happened in the opening stages of the 94th edition of the ISDE: (for extended coverage of the 2019 International Six Days Enduro, click here.)

The defending champions, Team Australia (consisting of Daniel Sanders, Matthew Phillips, Joshua Green and Luke Styke), got back out in front of the rest of the world after day one was said and done. Daniel Sanders came out and made the biggest statement of the day, winning five of the day’s seven total tests and accumulating an over 30-second individual lead over the next fastest rider, with his teammates all finishing within three minutes of his day one time. Sanders also leads the E3 class as well as the ISDE overall.

Behind the Aussie team by about 20 seconds sits the American team of Ryan Sipes, Kailub Russell, Taylor Robert and Steward Baylor. The crew of KTM riders seemed to have sort of a slow start to the day, but by the end found their pace and were able to have at least a few of them in the top ten of each test. Although the team currently sits second overall, Taylor Robert and Kailub Russell sit first and second in the E2 category, while Ryan Sipes sits second in E1 and Baylor is currently in third for the E3 class.

Third in the World Trophy classification after day one is the Italian team of Thomas Oldrati, Matteo Cavallo, Rudy Moroni and Davide Guarneri. The team as a whole is a bit further back from the lead, by just over two minutes, but with five days of racing left, they’re far from out of it.

Just like their World Trophy counterparts, the Australian Junior Trophy team holds the lead after day one. Of the three junior riders, Michael Driscoll, Lyndon Snodgrass and Fraser Higlett, Driscoll is the only one to have raced in last year’s six days where the team finished fifth in the junior category. The changes to the team have proven beneficial so far, as the team goes into day two tomorrow with over a one minute lead to second. On top of having the Junior lead, Faser Higlett also currently sits third overall in the E2 division.

The Junior Trophy team from the USA, with Josh Toth, Grant Baylor and Ben Kelley, also sit second in their specific classification, a bit more than a minute behind the Australians. Both Ben and Grant are having good rides in the E2 division, as well, as Ben currently sits in fifth and Grant in seventh. Toth is currently in 15th in the E1 class.

Following their result from last year, the French team of Theo Espinasse, Leo Le Quere and Till De Clercq continues into the 2019 ISDE sitting third in the Junior Trophy division after day one. They sit just under another minute behind Team USA in second, but just four seconds ahead of the Italian Junior Trophy team in fourth, so it’s close racing within the top five countries.

In the Women’s trophy division, the German team of Selina Schittenhelm, Anne Borchers and Maria Franke currently hold a five second lead over the American team of Brandy Richards, Becca Sheets and Tarah Gieger. Even though as a team the US is sitting second, Richards currently sits a little over fifteen seconds ahead of Germany’s Franke in second. The fight between the top two is currently the only close battle, as Australia is back about a minute in third, almost another two minutes down to Great Britain in third and another two minutes on top of that to Spain in fifth.

Alongside all three of the trophy team divisions are the club teams, who (at least in regards to the American team) are riders who have qualified to be apart of team USA for the year. So far this year, all of the teams are doing well, especially the XC Gear club team of Ricky Russell, Dante Oliveira and Austin Walton, who currently lead the club division after day one. Both Russell and Walton carry serious talent with them into their first attempts at the ISDE, being helped along by Oliveira, who is attending his second six days now. Dante showed incredible speed all day long, earning second overall amongst all of the riders (trophy riders included) during his run through test two. Another club team doing well is USA’s District 37 team of Jacob Argubright, Nathan Ferderer and Blayne Thompson, who are back in third place by just over three and a half minutes. In the individual categories, JT Baker of the Gas Gas USA team, holds a 43 second lead in the C3 class after just one day of racing.