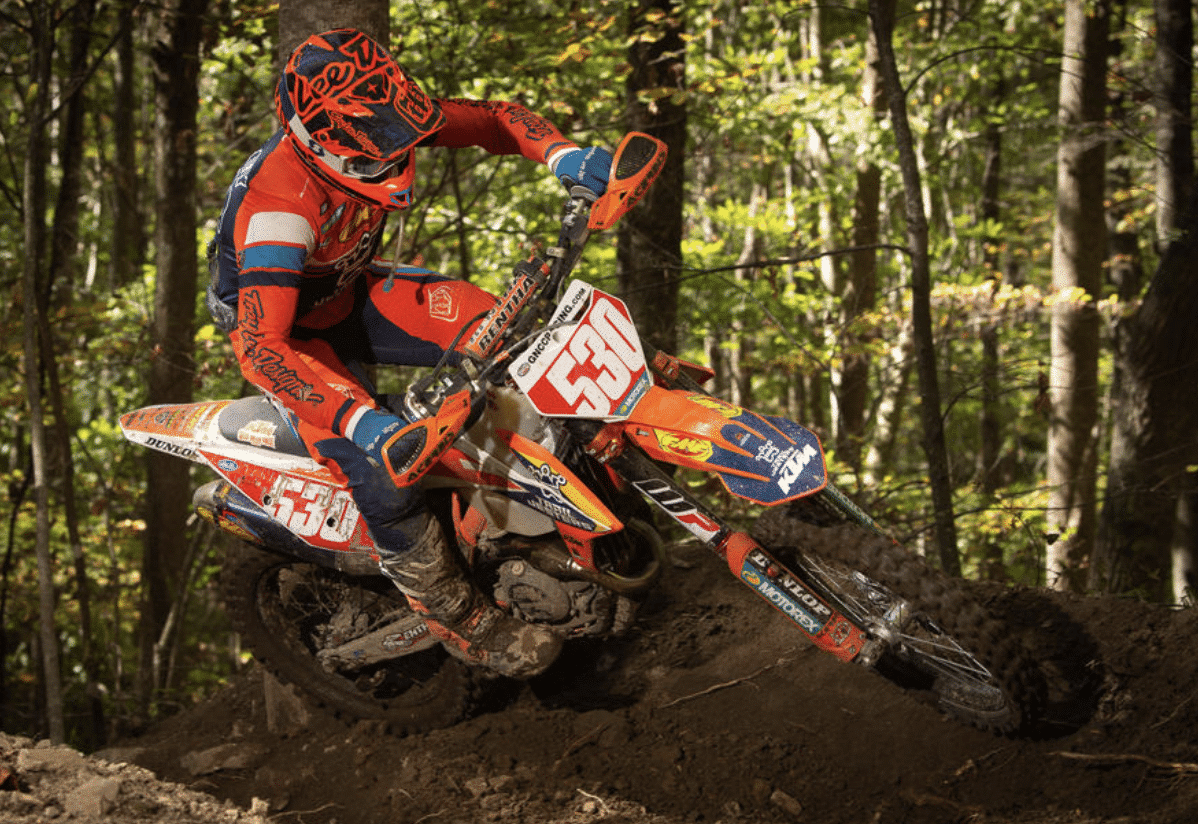 With two of the top riders Thad Duvall and Kailub Russell out with injury and the championships in both classes already locked up the 2019 Ironman GNCC would be wide open for new faces on the podium. Sunday’s motorcycle racing at Ironman Raceway in Crawfordsville, Indiana saw the rain let up, the muddy conditions would begin tacking up and becoming slick in spots throughout the day.

The slick and tacky conditions wouldn’t stop Trail Jesters/KTM’s Ben Kelley from making his way through the pack after an almost dead last start off the line. Kelley would come through on the first lap already sitting third overall. Kelley would consistently get faster each lap, and by the time he came through on lap number two he would be sitting first overall. Kelley was not looking back as he maintained those fast lap times until the checkered flag flew. Kelley has now earned two overall and XC1 Open Pro class wins in a row, and moved into the third place position in the National Championship points standings for the year.

Rockstar Energy/Factory Husqvarna Racing’s Trevor Bollinger maneuvered his way through the pack after a fifth place start to the day to come through second overall and land his fifth podium finish of the season. Bollinger was on a mission to end the season on a high note, and he did just that by battling at the front for the duration of the race. Bollinger concludes his 2019 season sitting fourth in the National Championship standings.

Coming back from a mid-pack start to round out the overall podium at the season finale was Tely Energy Racing/KTM’s Steward Baylor Jr. After running sixth and fifth for majority of the day, Baylor Jr. was able to capitalize on the last lap and take third overall to end his season. Baylor Jr. holds onto fourth in the points standings.

Tely Energy Racing/KTM’s Grant Baylor steadily worked his way up through the pack after a 10th place start to his day. As the race wore on, the track began to come together more and more, making riders lap times faster. Baylor would use that to his advantage making the passes stick on fellow competitors and moving his way up to fourth overall as the checkered flag flew.

FMF/KTM Factory Racing’s Josh Toth found himself back to fifth by the time the checkered flag came out. Toth ran fourth for the duration on the race, but would find himself battling with G. Baylor during the final lap of the race for the position.

Babbitt’s Online/Monster Energy/Kawasaki’s Jordan Ashburn and his teammate Josh Strang came through sixth and seventh overall at the 2019 finale in Indiana. Ashburn would start out the race by grabbing the $250 All Balls Racing XC1 Holeshot Award, and running in the lead position for the first lap. Ashburn would continue to run in third until the final lap, where he would find himself entangled with fellow competitors. Ashburn would remount and recover for sixth. Strang would derail his chain on the first lap, and have to battle back for his seventh overall on the day.

Phoenix Honda Racing’s Andrew Delong was on the gas at the Ironman GNCC, pushing to keep a consistent season alive, and his top 7th place position in the points standings. Delong would ride to an eighth place position in XC1 and 10thoverall on the day in Indiana. Delong will head to Japan next weekend to race against Japan’s top off-road racers in the JNCC season finale.

Coming through second on the first lap was AmPro Yamaha/Moose Racing/Parts Unlimited-backed rider Ricky Russell. However, as the lead group came through Russell would not come through, instead Russell would be seventh. Ultimately Russell found himself ninth in the race, and would cross the finish line there. Russell rounds out the season sixth in the standings, even after being unable to race at the first four events of the season.

FXR/Husqvarna/SRT/Hoosier’s Layne Michael came through to take home another top 10 finish in the XC1 class. Michael sits just outside the top 10 in points with an 11th place standing. Michael was unable to compete at six events throughout the season due to injuries.

In the XC2 250 Pro class it was Coastal Racing/Husqvarna’s Craig Delong coming away with second-straight win the class, while also coming through eighth overall in Indiana. Delong would battle throughout the day swapping positions multiple times, but ultimately coming away with another win. Delong holds onto second in the XC2 class points standings for the year.

Tely Energy Racing/KTM’s Liam Draper earned another podium finish at the season finale, and holds onto fifth in the year end points standings. Draper put up a fight for the lead position and for his podium position throughout the duration of the race. Draper would hold off his fellow competitors though and take the second place finish by a couple minutes.

FXR/Promotion MX/G2 Ergonomics’ Jonathan Johnson landed himself a podium finish to end the year, with only a couple hours on a brand-new bike. This was Johnson’s first-ever XC2 podium finish, which helped him secure his eighth place finish in the class standings.

Lojak Cycle Sales/Yamaha’s Chase Colville earned his first FMF XC3 125 Pro-Am class win of the season after a handful of podium finishes throughout the year. Colville sits third in the points standings. Nathan Ferderer and Logan Kittock rounded out the class podium with a second and third.

Taking home the top amateur honors at the season finale was Trail Jesters KTM/Edelmann Sales’ Simon Johnson. Johnson clinched his class championship, while also announcing he would move to the XC2 class for the 2020 season. MXTire.com/Jeff Cernic/Bell Helmets’ Ryder LeBlond came through to earn second overall and second in the 250 A class. After earning the youth overall championship earlier in the season Tely Energy Racing/KTM’s Joseph Cunningham made his way to the top amateur podium to end the 2019 season.

KTM/MEPMX/Fly Racing’s MacKenzie Tricker came through to earn the WXC class win at the conclusion of Sunday’s morning race at the Ironman GNCC. AmPro Yamaha’s Rachael Archer would come through to finish second in the WXC class with Fly/Maxxis/Pro Circuit/KTM’s Becca Sheets rounding out the final WXC podium of the season. However, attention would be turned towards Rockstar/Husqvarna/Moose Racing’s Tayla Jones as she clinched her third WXC National Championship after a hard-fought battle all year long. The 125 B/C competitor, Tommy Fortune would come through to take the overall win by over three minutes.

In the 8 a.m. youth race it was Kawasaki’s Grant Davis taking another youth overall and YXC1 class win. Indiana native Jack Joy would come through second overall in the morning youth race after starting in the second row. Canon Kuneff came through third rounding out the youth overall podium at Ironman. YXC2 competitors, Cooper Jones and Nicholas Defeo rounded out the top five youth riders overall.