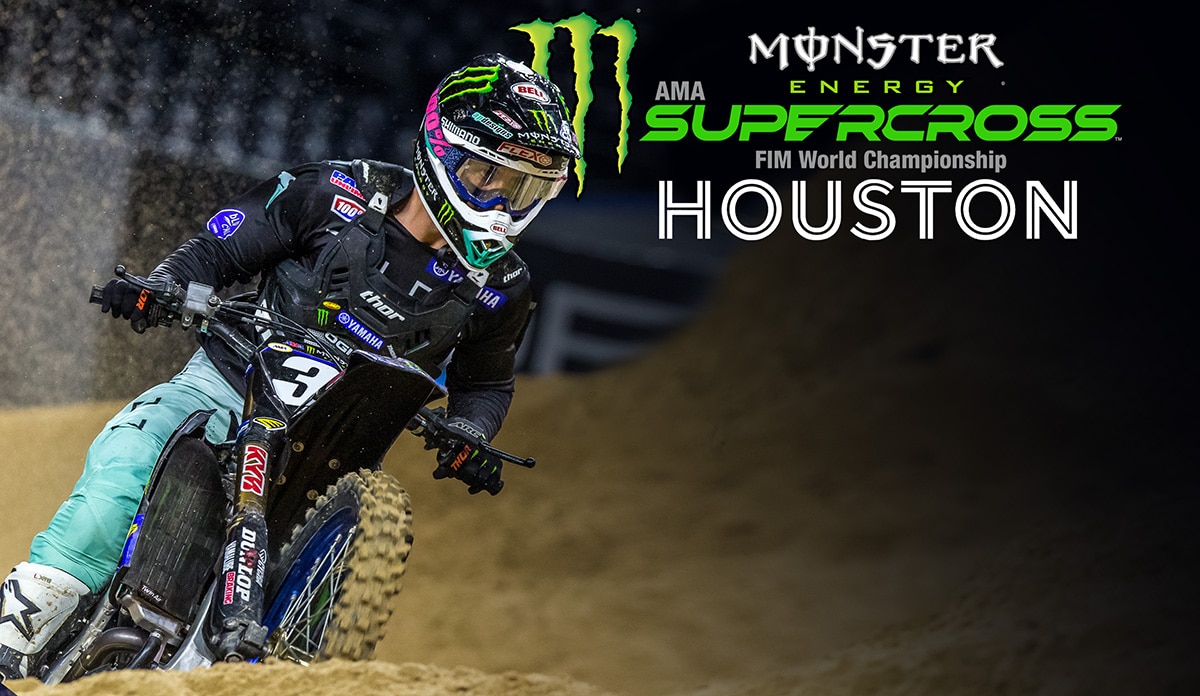 Adam Cianciarulo of the Pro Circuit Kawasaki team had the 250  West points lead coming into the 2019 Houston Supercross, but Star Yamaha’s Dylan Ferrandis was riding well and looking good after his first career Supercross win the previous week. It was the final Triple Crown race of the year, which means there were three main events in the evening show. Only the overall results will pay toward the championship, and there were 12 points separating Cianciarulo and Ferrandis at the start of the day, with two rounds after Houston.

It was a crazy night for the 250 west riders. Adam Cianciarulo and Dylan Ferrandis were on another level, and it looked like it might be a real one-on-one battle between those two. They never quite met on the track, however, with poor starts hitting one or the other in each of the three main events. In the end, it was the second win in a row for Ferrandis, closing up the points race to five points. 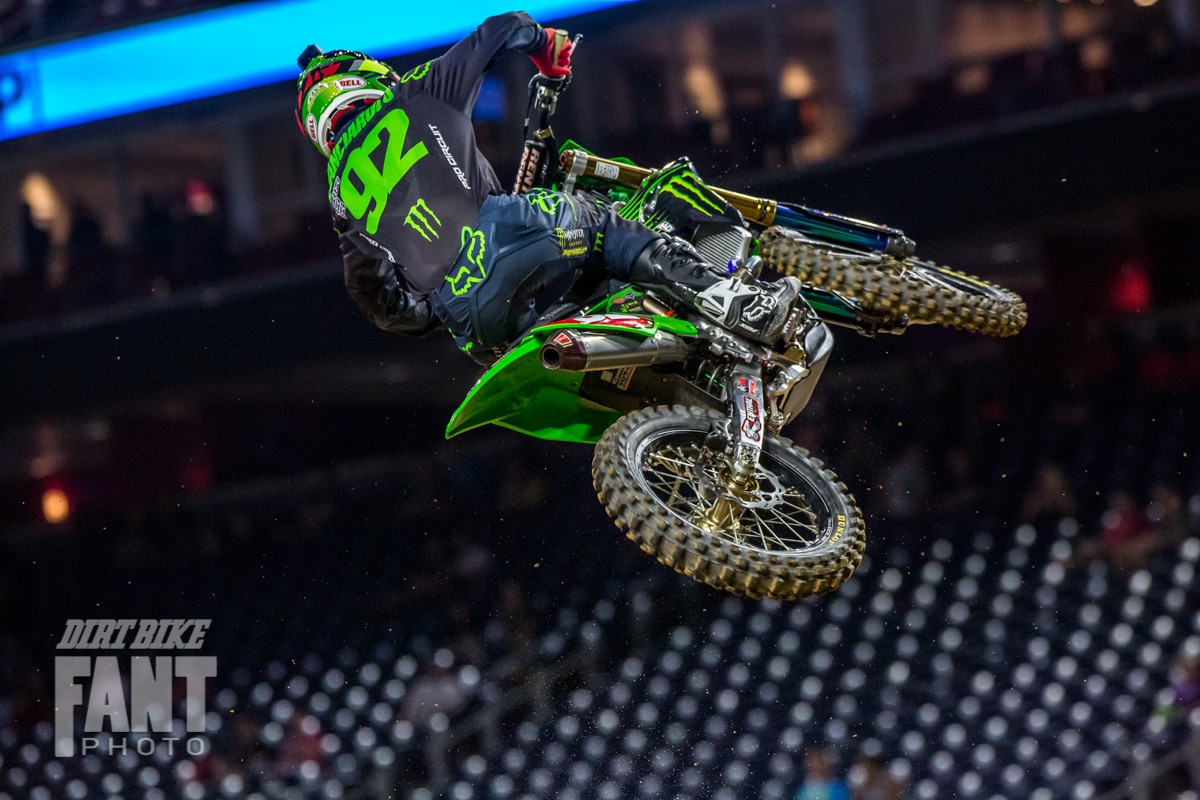 Adam Cianciarulo emerged from first turn carnage with the lead, while Cameron Mcadoo made an off-track excursion. Dyan Ferrandis didn’t come out of the chaos very well, and ended up around 10th. Jimmy DeCotis kept pressure on Cianciarulo in the early laps, but eventually he faded back, probably feeling the effects of a bad practice crash.  RJ Hamshire moved past Decotis about halfway through the race. In the following laps, Ferrandis was the fastest man on the track, catching up to Hampshire and setting up a  battle for second place.  At the start of the final lap, Ferrandis moved into second, but there was no hope of catching Cianciarulo. Hampshire was third. 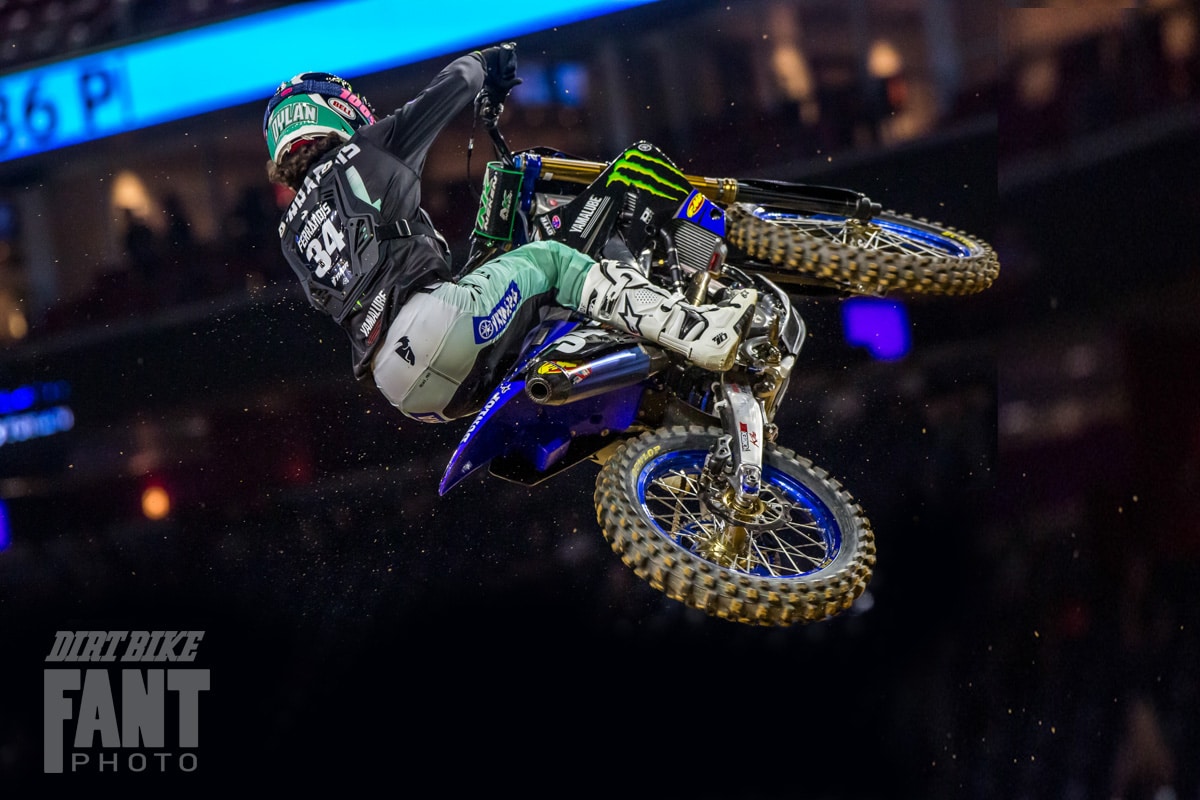 Adam Cianciarulo got a good jump, but went off the track after the first run. He came back outside the top 10, but  things would only get worse for him. Chris Blose was in the front with RJ Hamshire and Dylan Ferrandis close behind. Ferrandis passed Hamshire immediately and a few laps later, he tangled with Blose trying to take the lead. Blose got the short end of that, and then Ferrandis set sail. Cianciarulo then crashed on the blind side of a jump and had to watch as his bike was run over. He made a quick trip into the pits, but when he came out, he was all the way back in 18th.  In the remainder of the race, Cianciarulo was able to catch up to 10th place. Hampshire was second ahead of Cianciarulo’s teammate Garrett Marchbanks. 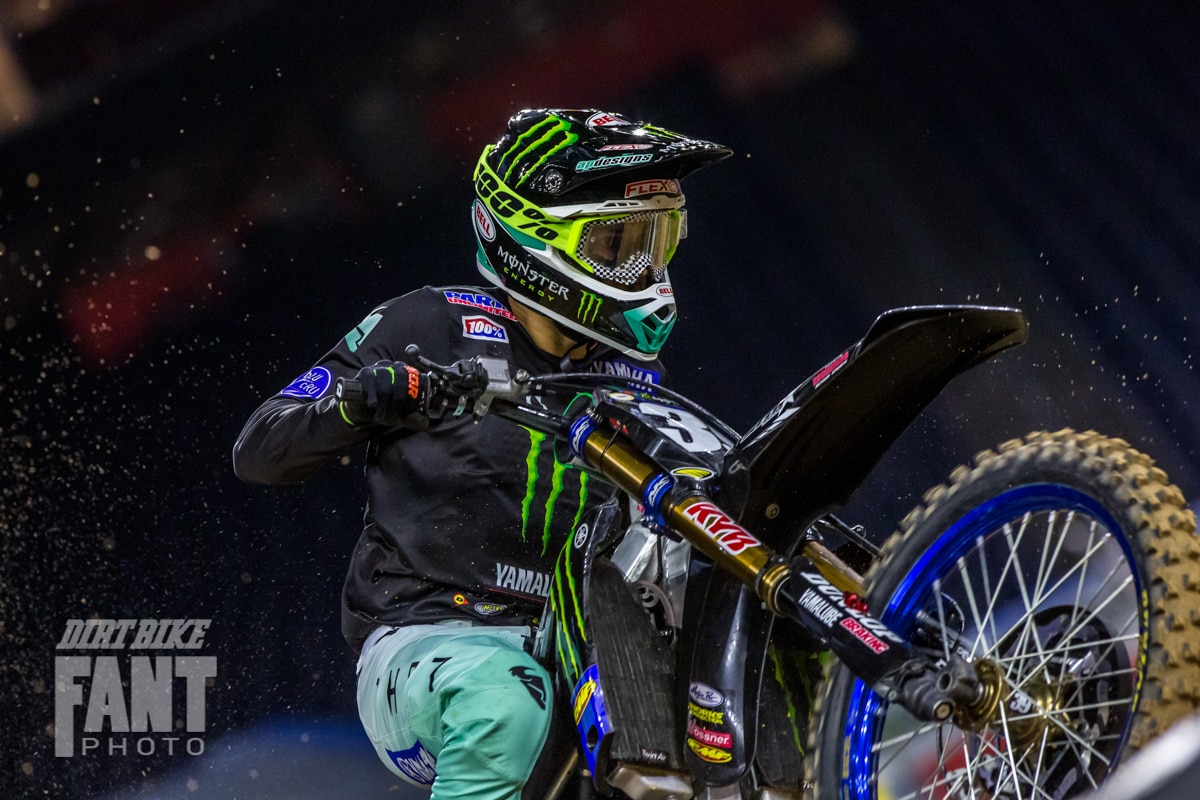 The evening continued to disintegrate for Adam Cianciarulo at the start of the third main event. Once again he had trouble getting through the first turn clean while Colt Nichols and Dylan Ferrandis were up front. To make things worse, Adam tangled with Sean Cantrel and then hit a downed Michael Mosiman in the whoops and lost more time. Nichols continued to lead with Ferrandis playing it cool in second throughout the race. Cianciarulo caught all the way up to a distant thrid.  “It comes down to it all being my fault,” said Cianciarulo. “I could say this guy went down in front of me or that happened, but I put myself in those positions.  Man I felt so good tonight, it just didn’t work out. I like a good battle, so it’s on.”

After both timed practices, it was clear who would be on top in Houston in the 250W class. Adam Cianciarulo and Dylan Ferrandis were far in front, and clearly inspiring each other to push harder. In the end, Cianciarulo had the fastest time by a fraction of a second. In the 250B ranks, it was Michael Leib making his debut Supercross of 2019. His best time put him in 14th and guaranteed a spot in the main event(s). After the top 18 riders, the rest will go to the Last Chance Qualifier.

Brandon Leith made the final cut with a win in the Last Chance Qualifier. Killian Auberson and last week’s near miss Mathias Jorgensen also made it. Martin Castelo fell in the second turn and finally made it to the final transfer spot.

250 A QUALIFYING PRACTICE ONE

250 B QUALIFYING PRACTICE ONE