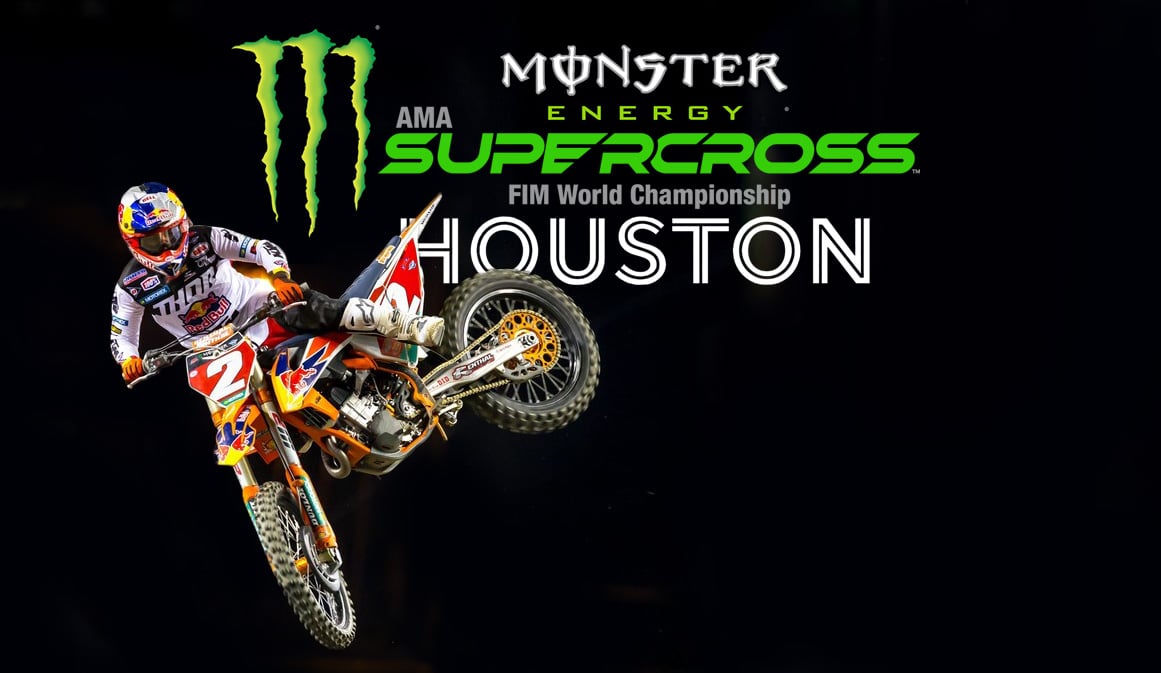 Cooper Webb, Marvin Musquin and Eli Tomac came to the 2019 Houston in the heat of a points battle for the 2019 Monster Energy Supercross championship. Red Bull KTM rider Marvin Musquin was definitely on a hot streak, having won the last two main events, but a 7-point penalty from the previous week gave his teammate Cooper Webb a little breathing room in the title chase. Musquin had a second-lap transgression where he jumped while the red cross flag was out for downed riders Chad Reed, Justin Brayton and Kyle Chisholm. That allowed Webb to keep his 14 point lead. Houston was the 13th round of the 17-race series, and it also was the last of the Triple Crown  races. This is a series within a series, using a different format. All the qualifying is done beforehand, and the night’s racing consists of three main events. The riders are scores using the Olympic system, with one point for first, two for second and so forth. The lowest score is the overall winner. Highest finish in the third race is the ultimate tie breaker.

The expected battle between teammates Marvin Musquin and Cooper Webb materialized at Houston in dramatic fashion. Both riders were aggressive and if there were any team orders to play nice, neither paid attention. In the end a number of pointless mistakes cost Musquin dearly. Webb, on the other hand, is riding more and more like a champion. For full coverage of the 2019 Houston 250 class, click here. 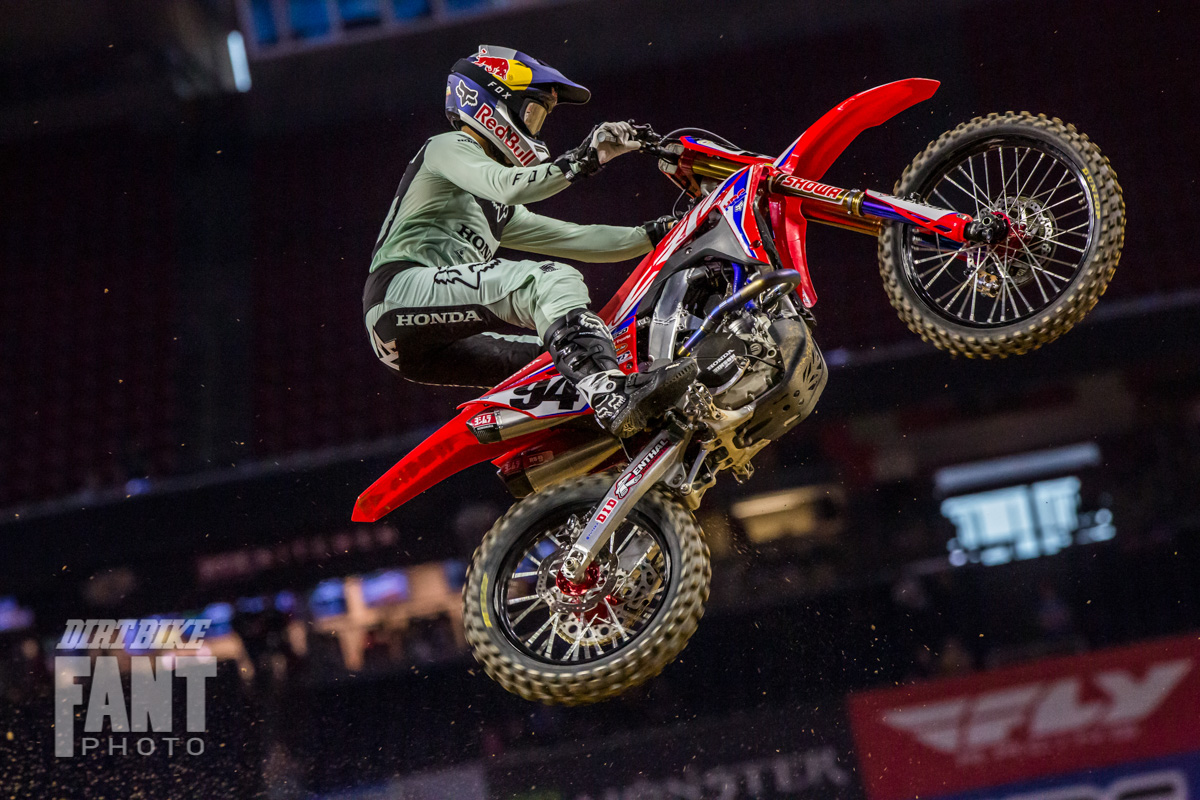 Ken Roczen and Cooper Webb were side by side coming out of the first turn. Marvin Musquin immediately made an aggressive pass on Webb, and Dean Wilson passed them both.  For the next five or six laps, Musquin and Webb raced hard, making contact again and again. Eventually, Webb knocked Musquin off the track, putting him back to sixth place. All this allowed Roczen to get away.  Halfway though the race, Roczen had a five-second lead but Wilson, Webb and Tomac were racing in tight formation.  Later in the race, the best action was watching Musquin  move forward. He passed Tomac, and was trying to pass Wilson (who had just lost a place to Webb). That didn’t go well, and Musquin went down, dropping back to sixth once more. He got up quickly and made a finish-line pass on Tomac, who mysteriously chopped the throttle at a critical moment. Roczen won with a 10-second lead.

Ken Roczen was having the best race of his season, right up until the start of Main Event number two. He got a poor jump, then hit Dean Wilson’s rear wheel going into turn one. He went down, injuring his leg. Then Roczen pulled off  after a brief attempt to ride. Cooper Webb, in the meantime, got the start with Dean Wilson close behind. Musquin was a few places back, and once again he started to cut through the pack. Musquin eventually moved into second, but couldn’t quite close the last two second to Webb. Cole Seely, Eli Tomac, Justin Bogle and Zach Osborne traded blows for the rest of the race. On the final lap, Musquin went down and was passed by Wilson with Seely close behind. 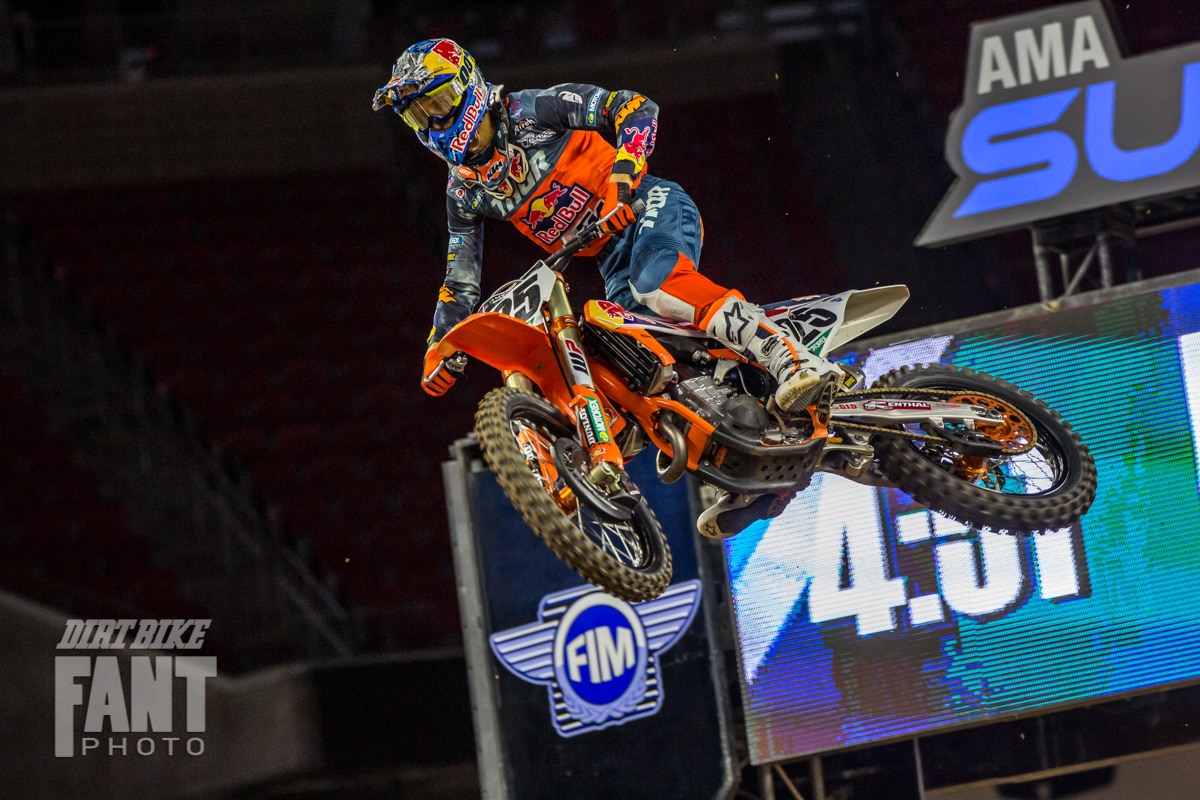 Marvin Musquin simply looked like he was trying too hard all night, being overly aggressive and making mistakes. For the third Main Event, it was a different story. He got the holeshot and basically rode away from the field. Cooper Webb was clearly riding a defensive race. He started in third behind Musquin and Zach Osborne,  then moved into second by lap six. Eli Tomac had been shadowing Webb that whole time, and he took second away two laps later. Osborne hung on for fourth ahead of a very quick Dean Wilson. For the 450 standings, click here.

Ken Roczen wanted it more than any of the other riders in timed qualifying. He set the fast mark in the first  session and left it to stand through the rest of the afternoon. There were 10 riders within a second in the final tally. The good news for Josh Grant was that his 17th place time was good enough to earn a gate in the Triple Crown program tonight. His debut for the Monster Energy Yamaha team last week ended in the last chance qualifier.  Scroll down for the LCQ results.

Austin Politelli said he had been over-riding the track all afternoon and that he just had to smooth out in order to win the LCQ. Adam Enticknap was the guy who qualified 19th, one spot out of an automatic transfer, so he felt the pressure in the LCQ. He was second ahead of Carlen Gardner and Charles LeFrancois from Folligny, France.

450 GROUP A QUALIFYING PRACTICE ONE

450 GROUP B QUALIFYING PRACTICE ONE