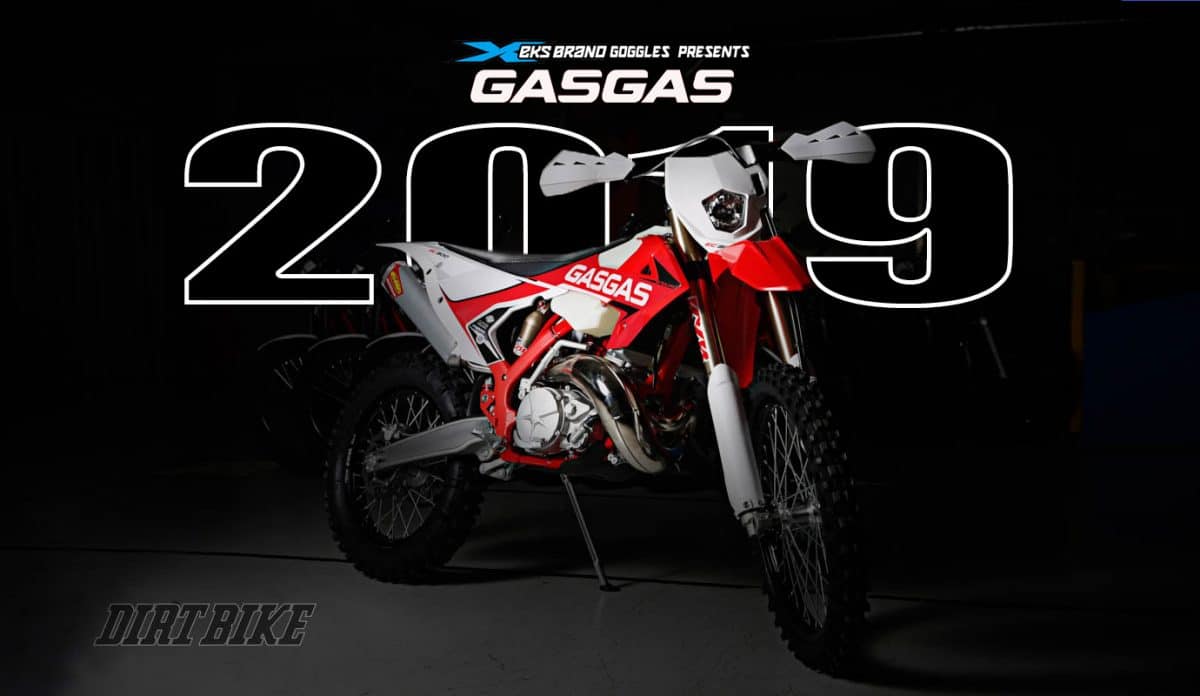 GasGas announced its 2019 line of two-stroke off-road bikes today. The following information is directly from the company in Girona, Spain:

The highly competitive GasGas EC enduro and XC cross-country models
renew their image by incorporating improvements in the frame and
suspension, the engine and the electrical system. The brand from Girona
updates the looks of its enduro while keeping intact the wild, attractive
line of its unmistakable two-stroke off-road models.

After the profound renovation experienced last year in the enduro range, the
prestigious dirt-bike brand takes another step forward in the evolution of its great icon
in this discipline with the launch of the new 2019 GasGas EC and XC.
More than two decades after Paul Edmonson made history conquering the first of the
nine World Enduro Championships for the factory from Salt, the latest in the line to
inherit those mythical EnduroCross initials takes up the challenge of that World
Champion bike and together with GasGas’s vast experience to make a new qualitative
leap with the presentation of the new EC and XC enduro range.

The natural evolution of a model that has managed to adapt as none other has to
the demands of the toughest of discipline, to keep growing until it has become
the best version of itself, a true dirt-bike symbol. A versatile, powerful, resistant
all-terrain machine designed to meet the needs of today’s enduro rider, whatever
their level, Thanks to the quality and versatility of a bike that, in 2019, renews its
image with a special graphic design where the red is kept as the emblematic color
of the brand, although this time introducing black and white strokes also.
With a dry weight just over 100 kilograms positioning it as one of the lightest
bikes on the market, the new GasGas EC and XC models show off improvements
in its engine and frame and suspension, in addition to its electrical system -with a
new starter and greater capacity battery system- and the novelty of the double
switch map, to get the most out of dry or wet terrain.
With regard to the engine, the new GasGas 250 and 300 cc bikes, have a new
cylinder head. New technology that allows an increase in the thermodynamic
performance of the engine and an increase in power for the 2019 versions,
achieving a more linear delivery of torque throughout its range.

As with its revolutionary predecessor, GasGas has made a firm commitment with
its new models for the maximum quality of their components and details to
highlight the fact it is a benchmark in the world of two-stroke enduro bikes. A
complete list of components, often surprising to see on a production bike, endow
the entire GasGas Enduro range with an exclusive character, equipped in its
entirety with suspension from the prestigious firm Kayaba, a Magura clutch
pump, FMF exhaust, Kehin carburettor, Neken handlebar, and Excel wheel rims
are among the most outstanding features of this 2019 edition.
Components to which more new features in the 2019 GasGas Enduro range are
added, this time concentrated mostly at the front end, which in this new model,
incorporates a new 28.6 mm diameter handlebar, without central tension bar,
and a new protector designed specifically by GasGas for this type of handlebar. A
new handlebar that is helped by the new supports -designed to provide greater
rigidity to the steering column- and the new Neken brand grips to increase the
grip, improve the feel and offer a greater sensation of stiffness and control of the
steering column.

The new electrical system is where much of the efforts of the GasGas technical
department have been concentrated for the new enduro range, which now has a
new electrical installation, a new optimized electric start system and, as a new
feature, incorporates a double “Sun/Rain” double switch map for the first time to
adapt power delivery to the conditions of terrain offering greater traction and
feeling to rider. New features include a new mounting system for the display.
The new 2019 GasGas Enduro series is made up of the EC 300/250/200 versions for
Europe and the XC 300/250/200 cross-country -not homologated- destined mainly for
the US market and use in closed or motocross circuits.