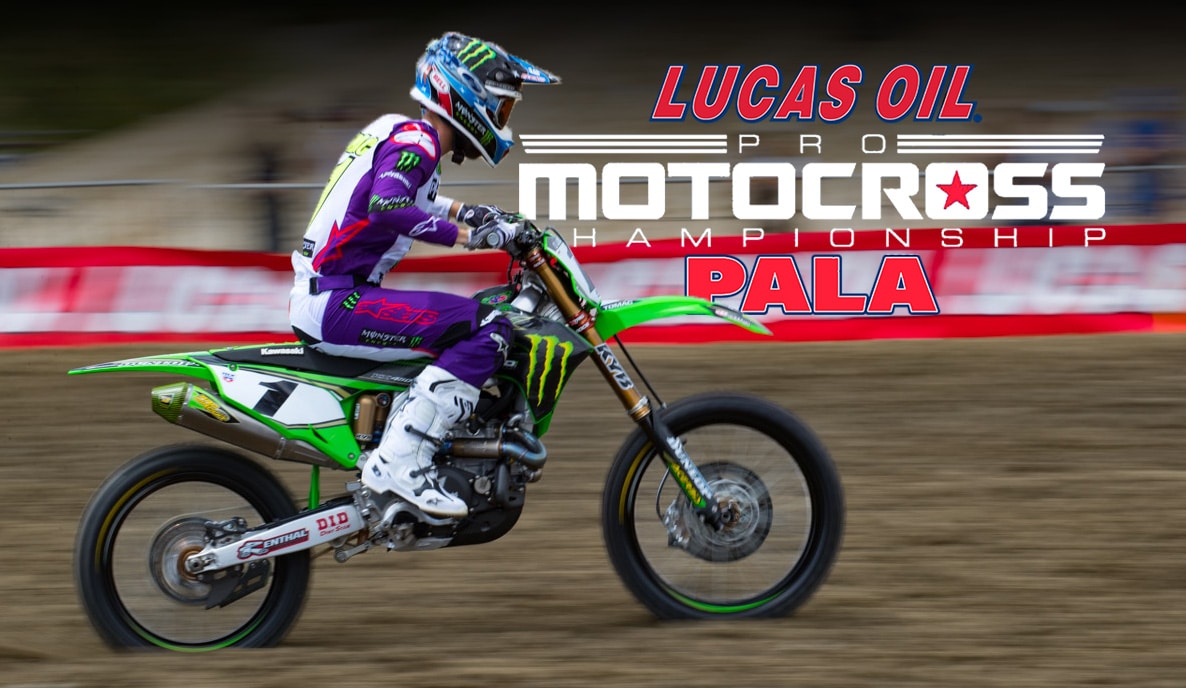 Round two of the Lucas Oil Pro Motocross Championship was held at Fox Raceway (formerly Pala Raceway) in Pala, Ca for the first time in eight years, and it provided for some of the most exciting battles we’ve seen in years. After the riders had to deal with the sloppy second motos last weekend in Sacramento, many of them were looking forward to the dry conditions waiting for them in southern California. On Friday, we got a first look at some of the riders on the returning facility’s course and how that track was going to shape up over the course of the weekend. By the end of the press session, the wind had picked up enough to dry out the track, leaving it pretty dusty and hard packed in places. Nonetheless, the track crew had it taken care of, completely flipping the conditions of the track around for Saturday, leaving practice in the morning to actually be kind of muddy and the rest of the day to be perfect. With one round in the books, perfect conditions ahead and the racers having a better idea of how to prepare for the rest of the season, here’s what we saw at the 2019 Fox Raceway National: (For extended coverage of the 2019 Fox Raceway National Motocross, click here.) 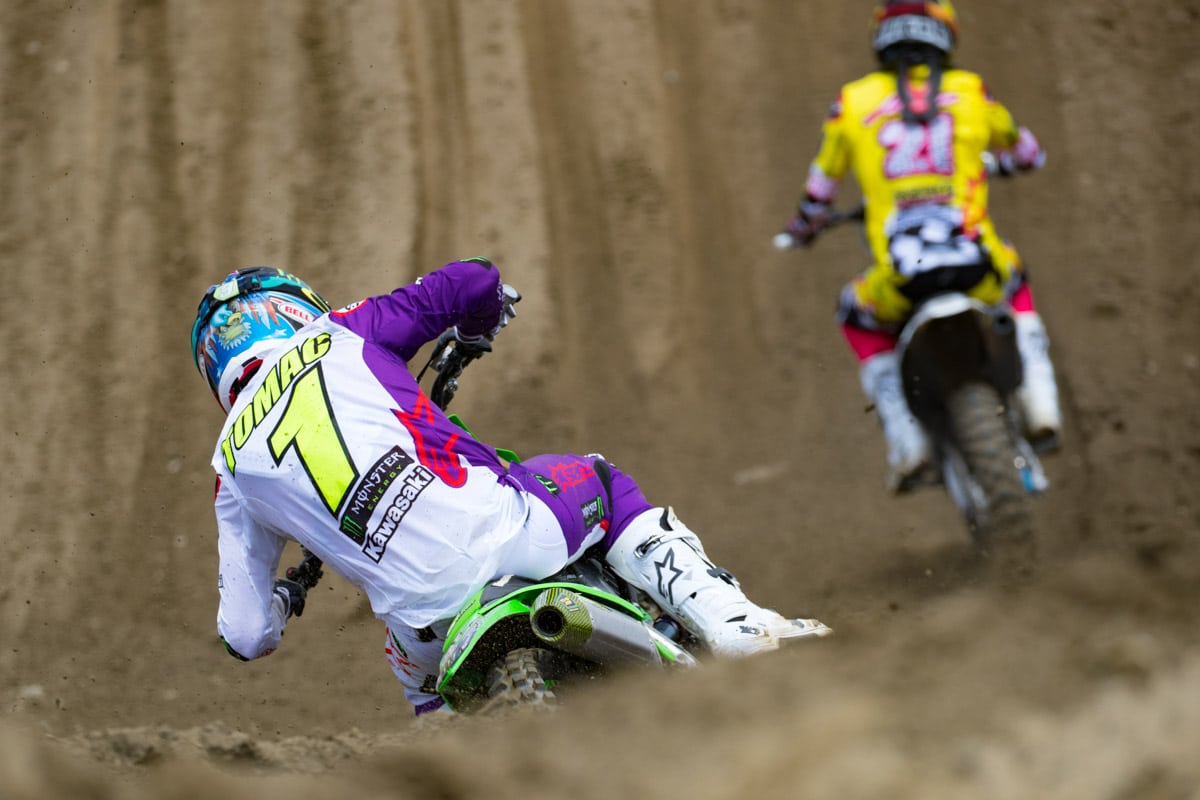 All eyes were on Monster Energy/Pro Circuit/Kawasaki’s Adam Cianciarulo after taking the overall win last weekend and taking control of the 2019 Lucas Oil Pro Motocross 250 Championship early on. Brand new red backgrounds graced Cianciarulo’s bike for the first time in his career for the outdoor series and fans wanted to see how he would back up his finish at the opener at Hangtown. Adam went tactical when choosing his gate for the start of the first moto, electing to go to the farthest outside gate pick in order to avoid the softer dirt that lay farther inside on the gates. Even with all of the pre-meditation into his spot and a flinch of the gate that had many of the riders jump, coming around the first turn the rest of the pack swooped underneath him and a bad start in moto one had Adam fighting through the pack, but making incredible charges toward the frontrunners and eventually making his way into third. In the second moto, he again started the race mid-pack, but made a much quicker run to the lead and later took the moto win and the overall with his 3-1 moto scores. Adam now carries the red plate and his 92 points into Thunder Valley next weekend.

Adam’s victory did not come uncontested, however, as MXGP transplant Hunter Lawrence gave one heck of a fight for the lead, swapping positions a couple of times. The Geico Honda rider, who had yet to show his speed that so many had heard about coming into the season, finally had his time to shine in the second moto. Lawrence would lead a couple laps of his own during the second moto, only to make a bit of a mistake allowing Cianciarulo back by. Another late moto charge made it look like he might be able to reel Adam back in, but to no avail. He ended up going 37-2 for the day, a DNF in moto one leaving him out of contention for the day’s overall.

Star Racing/Yamaha’s Justin Cooper had another outstanding ride in the first moto, taking his third career moto win only to back it up with a fourth in the second race, which was just two points shy of the overall victory. Another second overall keeps him second in the points, just six behind Cianciarulo. This also makes for the third time Cooper has been able to win the first moto and not also win the overall, but with two moto wins already this year out of the four (just like Cianciarulo), we expect to see Justin take his first overall here soon.

The rest of the day’s results came in a bit odd, as Star Racing/Yamaha’s Dylan Ferrandis finished a sub-par seventh in moto one after getting tangled up and going down in one of the first few turns, but came around for third in the second moto which was good enough for third overall on the day. With his turn around ride from Pala, Ferrandis still sits third in the championship and 22 points out of the lead.

Geico Honda’s RJ Hampshire put in a great ride and ran at the front of the pack for the first time this outdoor season in the first moto. The second moto just didn’t go his way, as he and Alex Martin came together causing RJ to go down pretty hard, but a broken water pump is what gave him his second moto DNF, leaving him 10th overall for the day.

Troy Lee Designs/Red Bull/KTM had a new rider, Wilson Todd, under their tent this weekend. The Australian had a great first round up at Hangtown, going 15-9 in the motos to put him 12th in the overall. With Mitchell Falk unfortunately breaking his collarbone at round one and Wilson Todd already having connections with the TLD group, he got the call to fill in starting in Pala. A nasty first turn pileup and a twisted up bike left him back in 29th during the first moto, but he rebounded to a 14th in moto two for a 19th in the day’s overall. 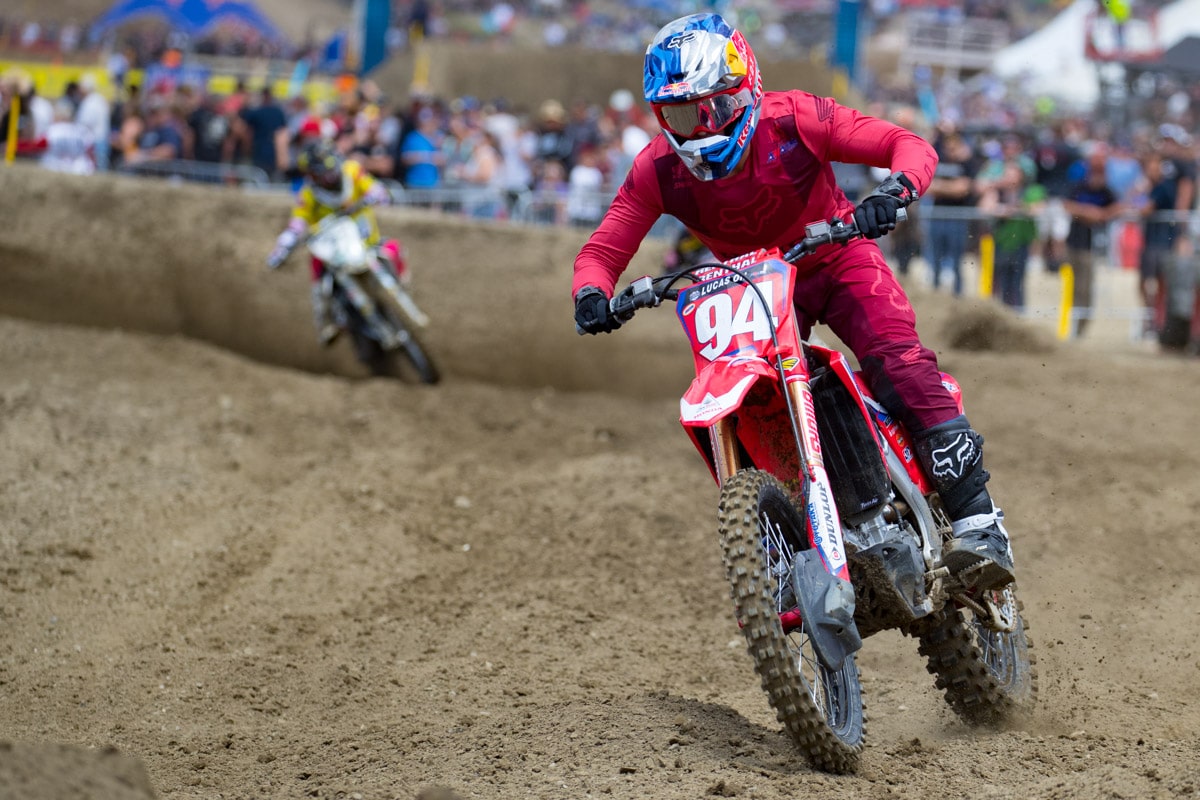 Monster Energy/Kawasaki’s Eli Tomac has seemed pretty disappointed with how he started out his first moto of the season last weekend in Sacramento, finding himself outside the top three going into moto two. He did turn it around to grab the second moto win, but it was only good enough for second overall. He came into the Fox Raceway National with a bit of a chip on his shoulder from that, and throughout the day proved again why he has that number one plate on his bike. Not getting the best of starts in moto one set him back, but inside the top ten. It wasn’t until late in the moto, though, that he was able to get around HRC/Honda’s Ken Roczen and take the first moto win. He got out to a much better start in the second moto, sitting behind Marvin Musquin and Justin Bogle, but made quick work of Bogle to come around the first lap in second. It wasn’t until about the midway point of the race that Tomac was able to get by Musquin for the lead, but once he did he amassed an eleven second lead to finish out the moto, making for perfect 1-1 moto scores. With the day’s overall, he also grabbed the red plate back from Roczen and takes a four point lead going into his hometown race next weekend in Colorado.

Red Bull/KTM’s Marvin Musquin rebounded after finishing back in sixth overall last weekend at Hangtown, taking a third in moto one, leading much of the second moto and eventually finishing second for 3-2 moto scores. The Fox Raceway National was a much better ride for the Frenchman and a better look at what we’ve come to expect of him from past results, as he now sits third in the championship and 19 points out of the lead.

Ken Roczen had all of the attention on him coming into round two of the Lucas Oil Pro Motocross Championship, taking the overall victory at the first round in Sacramento just a week ago and carrying the weight of that red plate with him to Fox Raceway. He got his day off to a solid start, once again being the fastest qualifier in the morning, a feat he had accomplished at the first race as well. He kept that momentum rolling into the motos, where he led the first thirteen laps until Tomac eventually took the spot away. The second moto he had to fight his way through the pack after a starting outside the top five. He would end up third in the second moto, tying Marvin for second, but being edged out with Musquin having the better of the second moto scores. Kenny heads out of California just four points behind Tomac in the championship.

After a third place overall finish at the first round last weekend in Sacramento, Rockstar Energy/Husqvarna’s Jason Anderson came into round two with a solid start to the season after not being on the bike until just over a month ago. He would go 4-5 in the motos to tie with his teammate Zach Osborne, but Zach edged him out having the better of their two moto scores.