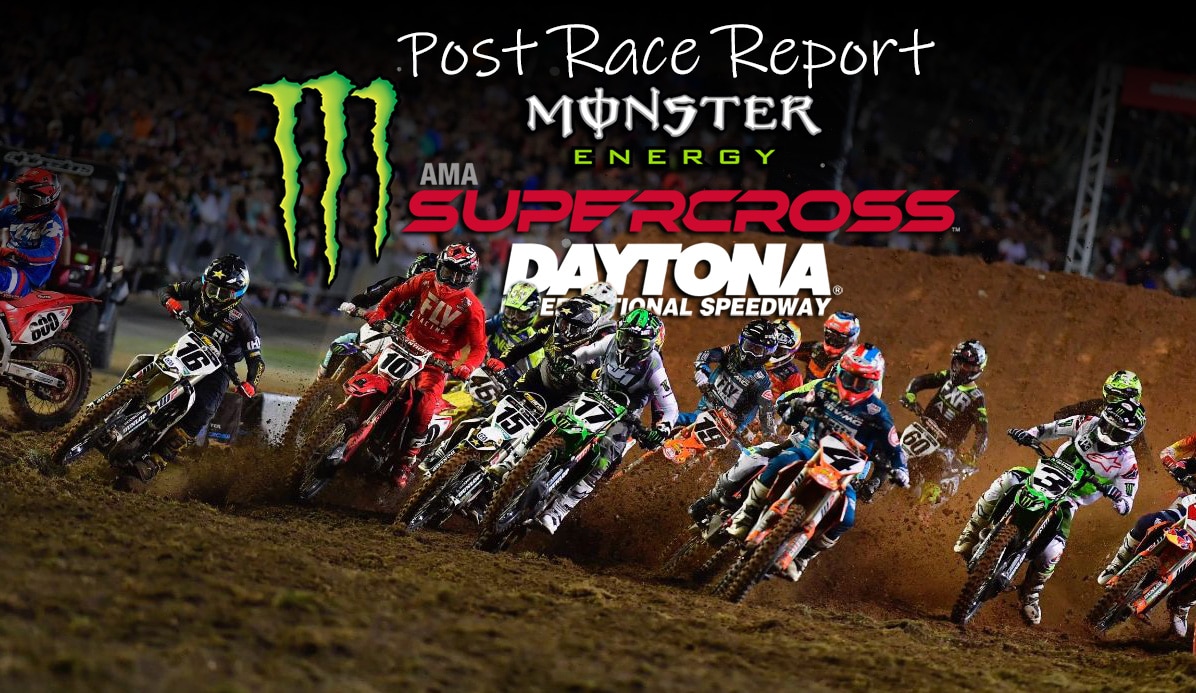 Eli Tomac joined an exclusive club by winning his third career Daytona Supercross. There are only seven riders who have done that: Ricky Carmichael, Jeff Stanton, Ryan Villopoto, Bob Hannah, Mike Kiedrowski, Jeremy McGrath and Chad Reed. The first name on the list, Ricky Carmichael, went on to win five in total, while Stanton and Villopoto won four apiece. Tomac reported that we was questioning himself after the first practice when “Marv” was so much faster. But he kept plugging away at it all night and in the main event, he turned the fastest lap time of the race–a 1:09.445–which was over a second faster than anyone. Cooper Webb, of course, was happy with the night as well because he comes away with a bigger point lead–now up to 19 points–with Tomac and Musquin tied for second. The loser in the points battle for the night was Ken Roczen, who finished eighth because of a first-turn crash with his teammate Cole Seely. Another hard luck case was Aaron Plessinger, who crashed hard and possibly broke his heal.

One of the riders who left Daytona with a smile was Zach Osborne, who has had nothing but trouble in the 450 class until now. “Sixth-place, that’s my best finish so far.”  Osborne said. “I had some good times in qualifying and I’m starting to find my feet in this class and starting to kind of flow and know my place a little bit. This is something that I can definitely build from and move forward from. It’s been a rough, tough start to the season with an injury before the season and obviously trying to get back at it has been a tough deal but I’m still here, still plugging away, and I know the work that I’m doing during the week will pay off soon and it’s going to be good.”

Another happy rider was Shane Mcelrath, who lined up against the 450s on his KTM 250SX-F, but to get some seat time while the 250 West riders were idle. McElrath earned a direct transfer into the Main Event with an eighth-place finish in the 450SX heat race. In the Main, McElrath came from outside the top-15 on the opening lap to ultimately finish 12th in the premier class. 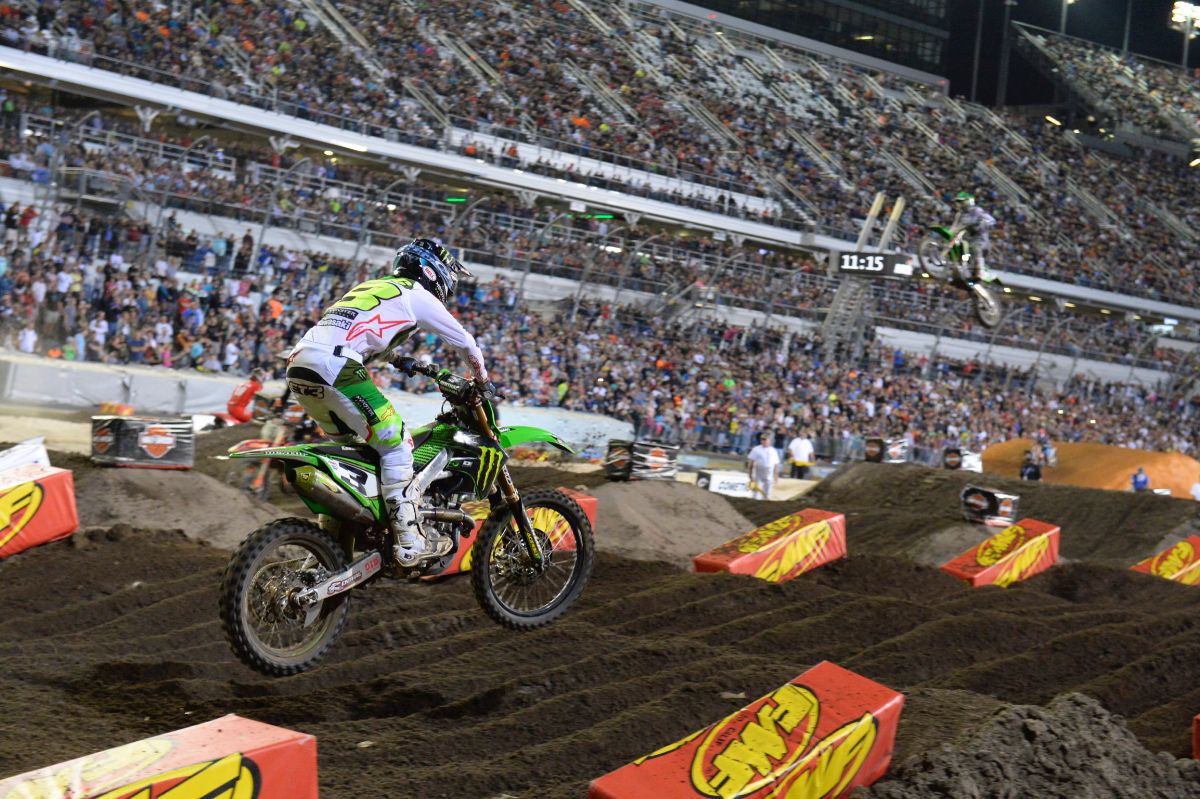 Eli Tomac: “Man, what a good night! It feels great to be back up here on top of the box in Daytona. This round is such a unique race and I’m always pumped when we can come in and get a win in front of this crowd. I was able to get a good start in the main tonight, which was so crucial. This win is pretty special to me and I’m honored to be one of the five riders to have won here three times. I’m excited for Indy next weekend and ready to keep this momentum going.”

Cooper Webb: “I got a really good start in the Main Event and just made a bunch of mistakes the first lap – I missed the rhythm and got passed by a few guys, went back to about sixth and had some work to do. I made some great passes and it was a great battle all night. It was cool to battle Blake and Marvin, we were all making mistakes but also kind of going for it. Once I got into second, I tried to make a run on Eli and I made some mistakes and also had some pressure from Marvin, so I was kind of in a weird spot. I struggled in a few places – the whoops being one of them – but overall, it was a good night.”

Marvin Musquin: “Daytona was overall a great day. The riding was good but unfortunately, I started making a couple mistakes by stalling the bike and that cost me a lot of time. I’m a little bit bummed because the speed was better than the guys in front of me but I was in third place. It’s good to be on the podium obviously but I’ve got to minimize the mistakes and be a little more consistent to be ahead of those guys.” 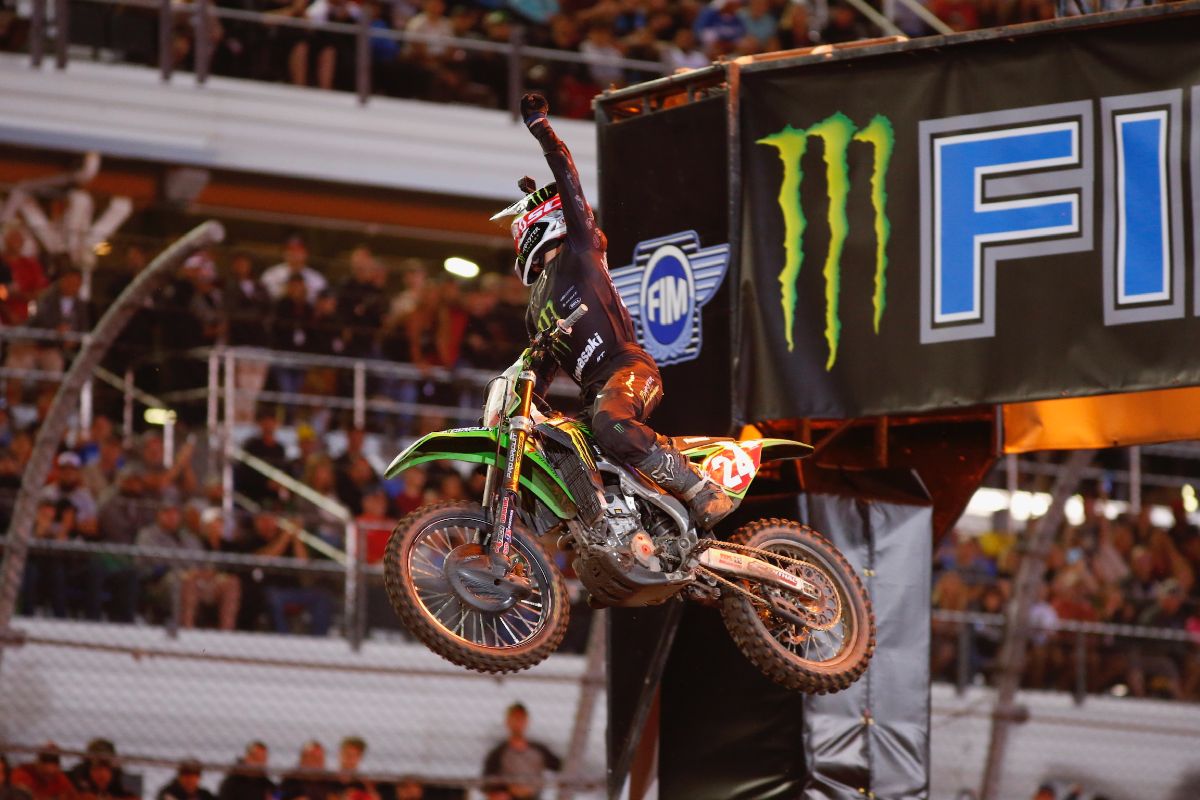 Austin Forkner was in a class by himself in the 250 East class.

Austin Forkner: “This is like a dream come true to win Daytona supercross! The track and fans here are so unique and unlike anything else. My Monster Energy/Pro Circuit/Kawasaki KX250 was once again a rocketship that allowed me to run up front all day and night, from qualifying to my heat race win, to being out front early in the main event and set my own pace. Tonight was a night I will remember forever, as I have never gotten to do a burnout on the pavement. I was just holding it wide open as the crowd was cheering me on!”