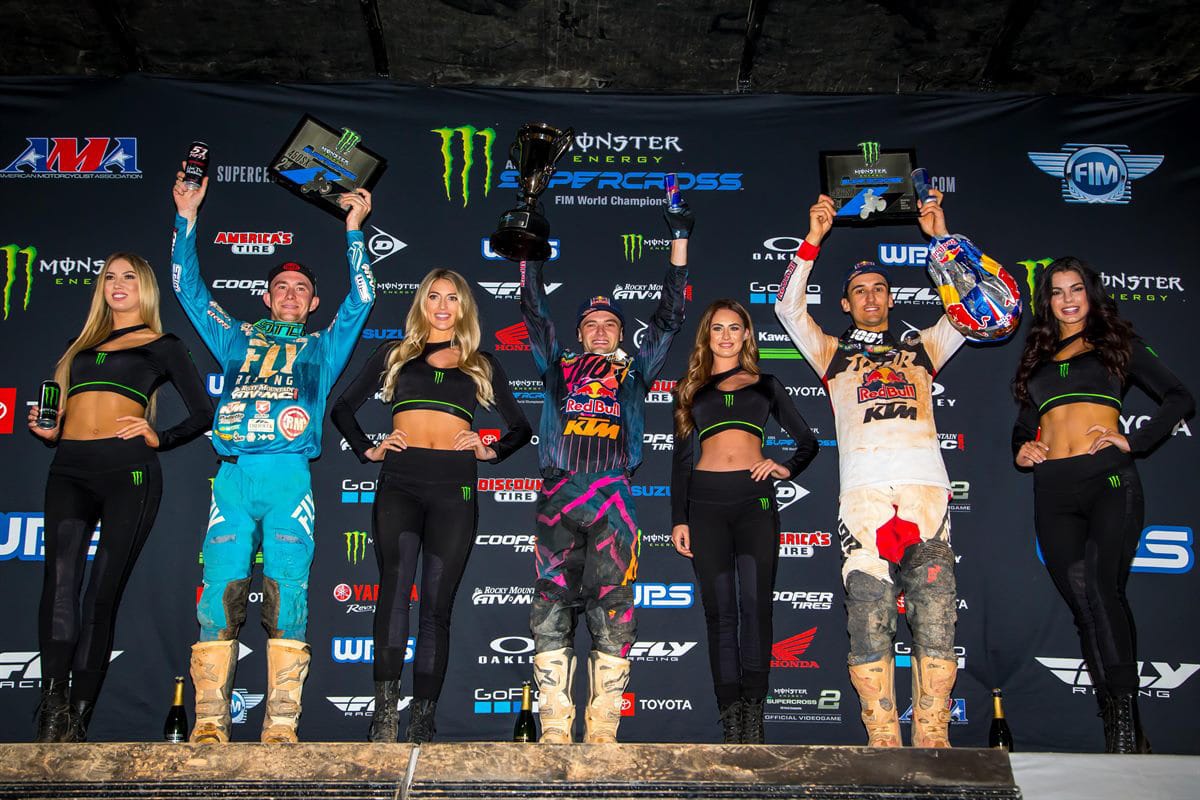 Cooper Webb: “Atlanta was a great night for me. The Main Event was awesome! I got a holeshot and led from start to finish. I had a lot of pressure from Marvin and also a lot of pressure from Baggett, so it was cool to stay comfortable, stay loose and get another win. The fifth win of the year is incredible and I’m just blessed to be in this position at the halfway point, it’s exciting.”

Blake Baggett:“ I would like to get another race win, but Coop’s been swooping them from us pretty quick, so I’m going to keep plugging away. It’s only halfway and a lot can happen. I had some good races but then I had that one DNF at Minneapolis, so that hurt me.”

Marvin Musquin: “It felt like it was going to be a better race for me – I had a great start so I was running second, which was good but I was eating a lot of sand in the sand section it was definitely tough. I was pushing really hard – I was better than Cooper in some areas of the track, so I was able to really put pressure on him in some areas but then I would go through the sand and I had to go in the main line because it was the safest and the quickest line but you kind of had to follow. I made a mistake and went off the main line and then Baggett got me. At this point, I just could not make the pass on Blake, even though I showed some really good speed. It’s only a third place tonight and I’m not very happy with the result.”

Adam Cianciarulo: “It’s kinda scary out there. If you don’t get a good jump, they’re going to push wide in the first rhythm section and you’re going to be tenth. I was able to make that adjustment and just stay patient behind Chase and make a move on him. Obviously I didn’t want to do anything stupid. It was the first thing that came to my mind. I was able to have a good race. A mistake-free race. I learned a lot throughout the night. In my heat race I rode terrible. I just kept a positive attitude and got it done.”

Dylan Ferrandis: “Last year I left here with a broken arm, broken jaw, broken teeth, so for sure it’s good to be this year on the podium. I tried not to think about it, but I was riding with a little with fear maybe. We showed that west coast is faster. AC rode good tonight. I’m happy.”

Austin Forkner: “They were a little faster than me, probably everywhere, but specifically in the whoops. I had two crashes there in practice so I told myself I’m going to jump through these and I’m not going to go any faster through them. I didn’t want a repeat of practice. I was doing that and I tried to latch on to Adam, and boom, Dylan got me. I kinda latched on to him for a couple of laps and saw that I had a pretty big gap behind me and thought ‘know what? This is a win as far as I’m concerned for east coast’ and with the day that I’d had, I was happy to salvage a third.”