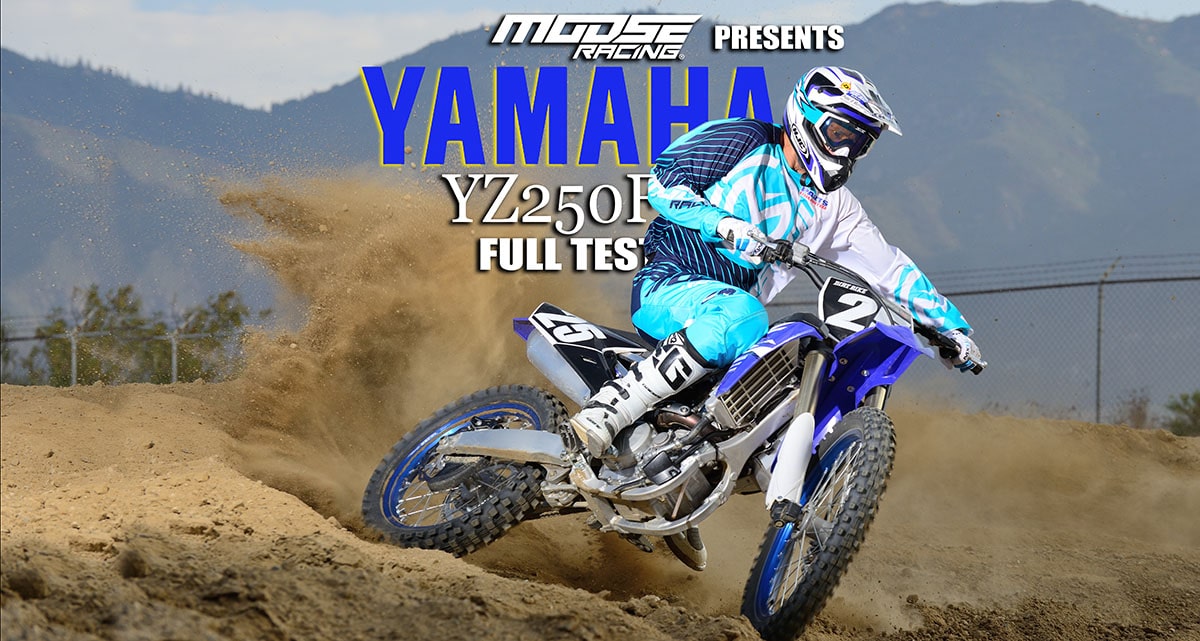 There’s a very good chance that the 2018 Yamaha YZ250F will go down in history as the one to have. It might be the one bike that commands a little more on Craigslist and pops up first on most search engines. It happens occasionally; check the cross reference under 2008 Honda CRF450R, 2007 Suzuki RM250 and so on. The current bloodline of the YZ250F goes back four years, and it has been the people’s choice in the 250 class for all that time. In 2014 it got the reverse-head, rearward-tilted-engine treatment, and for this particular bike, it really worked. Novices loved it because it was easy to ride. Pros loved it because it had the best suspension on the market, and it became the best seller in the class. It was tweaked and refined over the next few years, and now it’s back without any changes beyond cosmetics. This year Yamaha’s YZ450F got a complete redesign. If the historical pattern holds true, that means the YZ250F is up for some very big changes next year. That’s cause for concern for those who love it as it is.

THE YZ250F TIMELINE
Right now the motocross world is reinventing itself for one simple reason. Electric start has arrived. KTM proved that electric starters are reliable and don’t necessarily make a bike too heavy. The YZ250F was designed before this was apparent, so it will be one of the three 250Fs that doesn’t have it. But, that might not be so bad. Even though the KTM e-starters are light, the Honda and Yamaha 450s both gained weight with the change—and so will the Honda CRF250R.
Even though the Yamaha hasn’t changed dramatically in four years, it’s certainly not old-fashioned. When it went to fuel injection in 2014, the whole bike was reconfigured with the air filter in front of the fuel tank, right above the throttle body and the engine intake. The exhaust exits the rear of the cylinder, wraps around the head once in order to have the proper head-pipe length, and then has a muffler canister mounted in the middle of the subframe. Yamaha already had several years’ experience with the layout on the 450, so the YZ250F skipped over that painful shake-down period. In 2016 it got a new piston and crank, along with a bigger front brake rotor. In 2017 it got a new head, intake boot, remapping and a noticeable increase in power. Now the YZ comes with blue rims, new graphics and a white color option. Likewise, four of the five other bikes in the 250F class are almost unchanged for 2018. Only the Honda is different.

YZ LIFE
There are some things you should already know about the YZ250F. It’s a kick-start-only bike, and it’s not the lightest or the fastest in the class. The bike weighs 222 pounds without fuel, which is reasonable for a 250, but the Kawasaki is a pound lighter, and both the KTM and Husky are 4 pounds lighter apiece. The YZ owes its success to other factors, and on the top of that list is suspension. When the rest of the industry was experimenting with air forks and single-spring configurations, Yamaha stuck with the two-spring KYB SSS fork. It was heavier and probably more expensive to build, but Yamaha’s test riders were adamant that it was still the best in performance. It was a good thing. Yamaha’s success with this front end has influenced the industry, and now air forks are an endangered breed, at least on Japan’s offerings. The YZ’s front end can cover a fairly broad range, although it tends to favor bigger, heavier riders, at least by 250F standards. If you’re under 160 pounds, you might have to reduce compression damping substantially. If you’re lighter than that, think softer springs. For an intermediate rider in the 165-pound range, it’s the best front suspension available on any production bike, in any class, period. The rear of the Yamaha is equally impressive, although good rear suspension isn’t uncommon in this day and age. The days are gone when there were horrible shock flaws that had to be addressed before you could race a production bike. If you set the ride height to 100mm of sag, you’re ready to go. If you want the rear end to ride a little higher, give it a quarter turn of high-speed compression damping. Really choppy tracks might require a few more clicks of low-speed compression, but if you find you’re departing from the stock settings by too much, you probably need a spring change. The stocker covers riders between 150 and 180 pounds without much fuss. In overall handling, the YZ scores well too, possibly owing much to the suspension. You’ve probably heard some riders complain about the way late-model YZs behave entering or exiting turns. It’s been a source of much controversy since 2011, but only on the 450. Those issues simply do not exist on the 250. It turns extremely well and only gets better as you get more aggressive. It clearly leans more towards being a stable straight-liner than being quick and agile, but no one can honestly complain about any of the YZ’s handling traits.
It seems strange that the YZ’s biggest weak spot has become top-end power. Just a few years ago it was considered a brute in the 250 class, and the bike has gotten a little stronger since then. The class average, on the other hand, has gotten a lot stronger. Kawasaki has caught up, while the KTM and Husky have a huge advantage in peak power. The Honda, from all reports, will also have massive top-end output. Where does that leave the Yamaha? It’s the torquiest in the class, and that makes it the easiest to ride for average riders. The power advantage of the KTM and Husky comes at a price. You have to keep them singing all the time. Beyond that, you have to keep their throttles wide open; half-crack won’t do anything. The Yamaha, on the other hand, responds from the first yank of the cable. If you mess up, you can start over without much penalty. On top, the Yamaha is still as strong as ever, but it’s still about 3 horsepower down in a class where power is critical. Expert riders will have to find more.

YZ CLASSIC
There are other reasons we think the 2018 YZ250F will go into the books as a bike to find and hold on to. We have enough history to know it’s the most reliable 250F in the class. That’s one big reason the bike hasn’t lost weight over the past four years. Most of the changes have been aimed at reliability, despite mounting pressure to shave pounds. It runs cool in the summer months when most other bikes boil over just waiting for the gate to drop. The clutch might not be hydraulic, but it has a consistent feel and an easy pull. The brakes are decent, the wheels are tough, and the bike comes with some of our all-time favorite tires, the Bridgestone 404 and 403. This year the YZ250F will be overshadowed by the newer electric-start bikes in the 250 class, but it will probably still be the most logical choice for the rank-and-file riders in the 250 class. Chances are, it will be a long time before that changes. 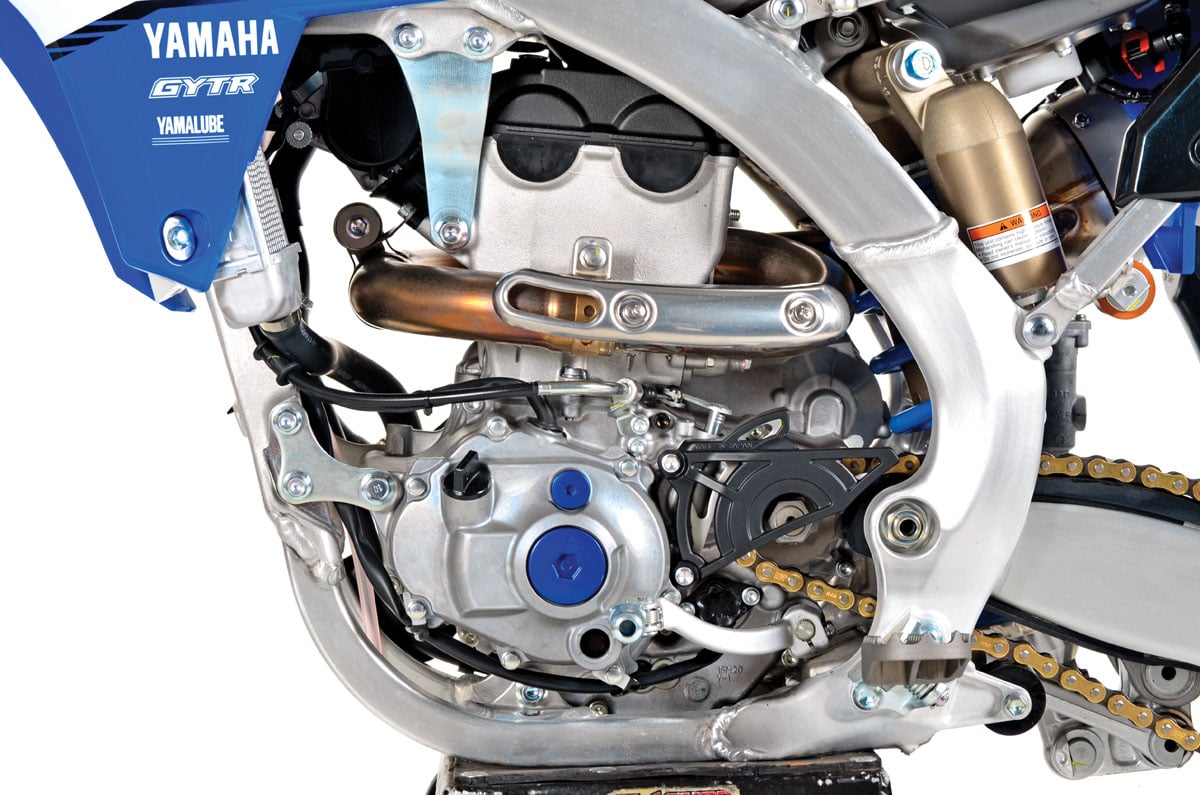